Curcumin (CMN) is yellow in colour and derived from the plant Curcuma longa Linn. CMN has a number of activities such as antioxidant, antiinflammatory, antiviral, antibacterial, antifungal and anticancer. CMN has potential in number of diseases such as arthritis, Alzheimer’s disease, diabetes and allergies [13-16]. Quercetin (QCN) is a flavonol, which is a subclass of flavonoids. QCN is found in number of fruits and vegetables such as onion (Allium cepa Linn.), apple (Malus pumila Miller), black tea (Camellia sinensis (L.) Kuntze) and black currant (Ribes nigrum Linn.). QCN has number of activities such as antioxidative, anticarcinogenic, antiinflammatory, antiaggregatory and vasodilating activity [17-19].

Estimation of QCN has been done by using HPTLC for a number of times individually and also in combination with other compounds [20-23]. Also a number of validated HPLC methods have been devised for the estimation of QCN both individually and in combination with other compounds [24-27]. Quantification of CMN has been done by HPTLC technique [28]. Another stability indicating HPTLC method has been developed to quantify CMN in pharmaceutical formulations [29]. A HPLC method for simultaneous determination of CMN and silymarin in various dosage forms has also been reported. Analysis of degradation products of CMN has been done using HPTLC [30]. Other methods are also available for estimation of curcumin [31,32].

The plant materials were collected from local area in Fatehgarh Taprian, Ropar, Punjab, India in the month of October. Then, plants were identified and authenticated as C. longa (Specimen number ACL/11/12) and Syzigium cuminii (Specimen number ASC/11/12) at NIPER, Mohali, Punjab, India. A herbarium sheet of the plants were submitted in the herbarium of the NIPER, Mohali, Punjab.

Literature survey revealed that several solvents like methanol [33], ethanol [34] and acetonitrile [35] were used for the extraction of CMN and QCN from plant and polyherbal formulation. The efficiency of extraction with methanol was greater than others so methanol was selected for standard and sample preparation. The CMN and QCN standards were also found to be stable in this solvent at room temperature and also during the entire duration of study design.

Depending on the polarity of both the drugs, solubility analysis for both the drugs was done in various solvents such as methanol, acetic acid, ethanol, 0.1 N NaOH, 0.1 N HCl. Methanol was selected as the solvent for study. Standard solutions of both CMN and QCN were prepared using HPLC grade methanol giving concentration of 125 μg/ml in each separately and also in combination.

Twenty tablets of Divya madhunashini vati were weighed and powdered. From this, a sample solution containing 10 mg/ml drug was prepared using HPLC grade methanol and filtered through 0.45 μ Millipore nylon filter. Final concentration of CMN was 10 μg/ml and for QCN was 50 μg/ml.

Conditions were optimized for individual CMN and QCN separately. Then, optimization was carried out for simultaneous estimation. Isosbestic point was found by using UV spectra at 397 nm. Methanol and water in ratio of 75:25 v/v isocratic elution mode with the flow rate of 1 ml/min were used for HPLC analysis. Each chromatographic run was completed within 10 min. Then, this HPLC method was applied to the sample solution of marketed polyherbal formulation and concentration of CMN and QCN was calculated using the Eqn. 1, (sample area/standard area)×(weight of standard/50)×(100/sample weight×purity of standard/100)×(100–W/100×average weight), where, W is the percent water content in standard drug.

A working standard solution of CMN (10 μg/ml) was prepared using methanol. Similarly, for QCN, 50 μg/ ml working standard solution was prepared using methanol. The planar chromatography was performed on fresh aluminium plates (10×10 cm) precoated with silica gel 60 F254 of layer thickness 0.2 mm (Merck, Germany). Before use, the plates were developed in the mobile phase and were activated horizontally for 20 min at 120 ± 0.5° using an oven to remove elutable components. Samples were applied to the plates as bands 6 mm wide, 10 mm from the bottom, by means of a pressurized nitrogen gas (150 kg/cm2) through Camag automatic TLC sampler 4 fitted with a 25 μ syringe. The bands were visualized in Camag UV cabinet at 254 nm. Developing chamber was Camag glass twin through chamber (10×10 cm). Densitometer consisted of Camag TLC scanner 3 operated by WinCATS software. The scanning speed and data resolution were 20 mm/s and 100 μm/step, respectively.

HPTLC method for simultaneous estimation of CMN and QCN

Mobile phase consisting of toluene/ethyl acetate/ formic acid (4.5:4:0.1, v/v/v) was used. Sample was applied using automatic TLC sampler. Then, TLC plate was developed over a development distance of 8 cm (migration time of 15 min) in solvent. After this the plates were dried at 60 ± 0.5° and then densitometric analysis was done. Calibration curve was constructed using different volumes of standard solution consisting of mixture of CMN and QCN.

Preparation of sample solution for HPTLC

Sample solution was prepared using Divya madhunashini vati tablets. Twenty tablets were weighed and finely powdered. A quantity of powder equivalent to about 500 mg transferred to a 50 ml volumetric flask, dissolved in methanol, volume made up with methanol and filtered through a 0.45 μm Millipore nylon membrane filter under vacuum. Concentration of CMN and QCN was calculated using the Eqn. 1.

Validation of HPLC and HPTLC method

Linearity and range were established for both the methods. Precision was evaluated by measuring intraday and interday precision. Accuracy was established by performing recovery studies. Robustness was established by making deliberate minor variations in the wavelength and calculating the percent deviation from original method. System suitability testing was performed before starting the experiment. Methanol was used as the extraction solvent as efficiency of the extraction was more with methanol than with other solvents.

Overlay spectra of CMN and QCN in methanol were recorded on a UV/Vis spectrophotometer and an isosbestic point was chosen at 397 nm. The solvent type, solvent strength, detection wavelength and flow rate were varied to determine the chromatographic conditions giving the best separation. Other conditions such as time required for analysis, flow rate of mobile phase, symmetry of the eluted peaks, assay sensitivity and solvent noise during drug analysis were also considered during optimization. It was determined at 397 nm, both the drugs can be detected simultaneously with good separation, sensitivity, consistent baseline and no mobile phase interference. 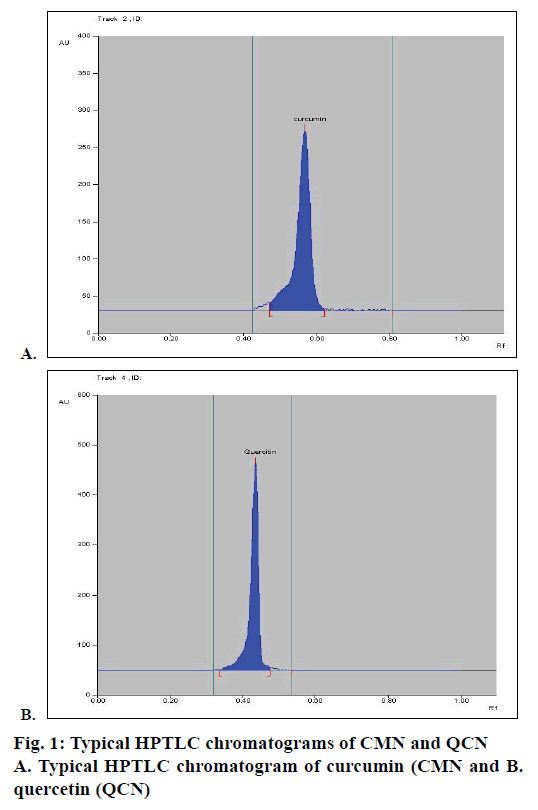 Calibration curve was constructed by plotting the peak area ratios of CMN and QCN versus the concentrations of the calibration standards. When the developed method was applied to the sample, HPTLC chromatograms were obtained for CMN and QCN, which were shown in Figure 2A and B, respectively. The CMN and QCN were found to be 9.7 and 0.674 mg, respectively in the marketed polyherbal formulation. 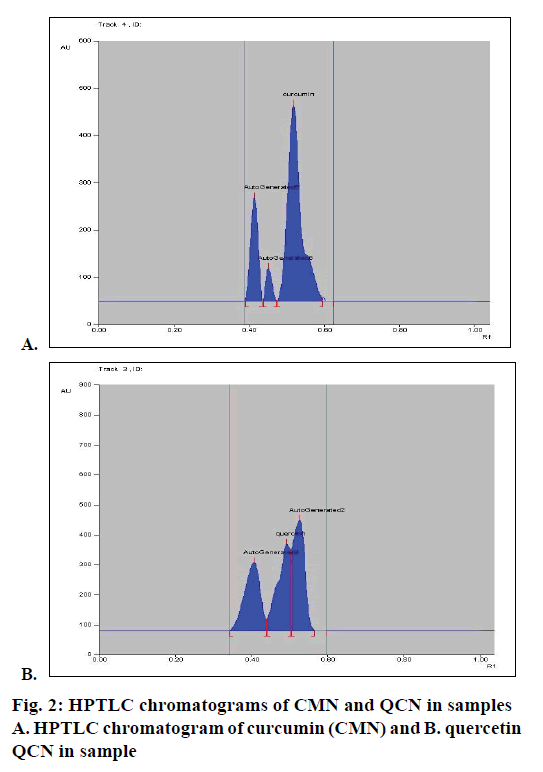 Robustness was determined by making small deliberate changes in the wavelength. Analysis was performed thrice, first at the original wavelength of 397 nm, second at 395 nm and third at 399 nm. Data obtained was presented in Table 4. The solution of CMN and QCN mixture was applied on the TLC plate at a concentration ranging from 20 to 1200 ng/ band on nine different tracks with 10 mm distance among the tracks from x-axis and y-axis, respectively. Three replications of each standard were performed on different TLC plates. The calibration data was plotted as the peak areas of respective standard (y-axis) against the nominal concentration (x-axis). Linearity data was given in Table 5. For this repeatability studies were performed. Precision and accuracy studies were done by taking 12 determinations (4 concentrations/3 replicates each). Samples at four different concentration levels (20, 40, 60 and 80 ng/band for CMN and 100, 200, 300, 400 ng/band for QCN) were applied in hexplicate on the same day. Sample concentration was estimated from the calibration curve. The intraday and interday accuracy and precision of the assay were assessed by the average relative percentage deviation (DEV) from the nominal concentration and the relative standard deviation (RSD) values respectively, based on the reported guidelines [38,39]. Precision (RSD) and accuracy (DEV) were calculated by using the following Eqns., RSD = standard deviation/average calculated concentration×100; DEV = 1–(average calculated concentration/nominal concentration×100). Precision and accuracy data of HPTLC were given in Table 6.

Table 6: Summary of precision and accuracy by hptlc

The authors wish to thank Dr. A. S. Sandhu, NIPER, Mohali, Punjab, India for identifying and authenticating the plant materials used in this investigation.