Zonisamide (I), chemically known as 1,2-benzisoxazole-3-methanesulfonamide and belonging to the class of sulfonamides, is used for the treatment of epilepsy[1-3]. During the synthesis of I by the route reported in literature[4], the starting material 4-hydroxycoumarin (II), four precursors, viz., 1,2-benzisoxazole-3-acetic acid (III), 1,2-benzisoxazole-3-bromoacetic acid (IV), 1,2-benzisoxazole-3-methylbromide (V), sodium 1,2-benzisoxazole-3-methylbromide (VI) and two process impurities, viz., 2-hydroxyacetophenoneoxime (VII) and 3,3,3-tribromomethyl-1,2-benzisoxazole (VIII) shown in fig. 1 were considered as potential impurities. The content of all these, which could be present at trace levels, was needed to be analyzed in the drug substance. Among the high performance capillary electrophoresis (HPCE) and high performance liquid chromatography (HPLC) methods reported in literature[5-12] for the determination of I, none was found to be suitable for the simultaneous detection and quantification of II-VIII. This was due to poor resolution between I and VI. This necessitated development of a HPLC method suitable for the separation and simultaneous analysis of I and impurities II-VIII. The method was validated according to ICH Q1A (R2), Q2A and Q2B guidelines[13-15] and also extended to separation of degradation products formed under various stress conditions. The results are reported in this paper. 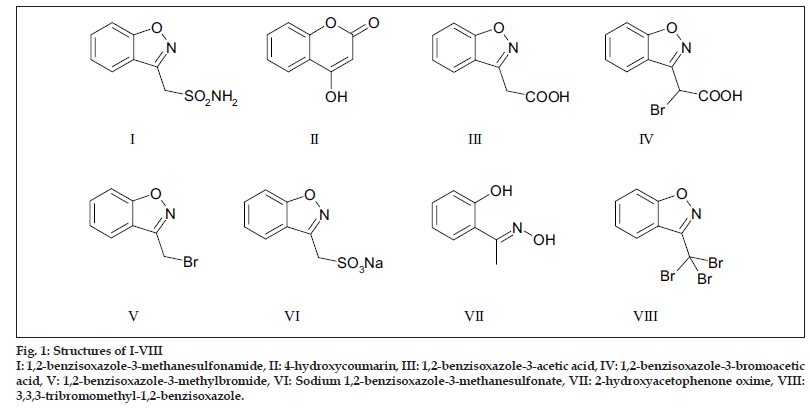 A series of solutions containing I and the impurities II-VIII in the range of 0.001% to 0.01% were prepared for determining LOD and analyzed by using the above HPLC method. LODs were determined from visual observation of areas of I-VIII at each concentration in comparison with background obtained by injecting a blank. LOQs were considered as 3 times of LODs. Six injections each of solutions containing concentrations equivalent to LODs and LOQs of I-VIII were performed to establish precision.

The accuracy was established by recovery studies by spiking 0.05%, 0.1% and 0.15% (with respect to sample concentration of 2 mg/ml) with previously prepared stock solutions of II-VIII. The specified limit for each impurity was not more than 0.10%. The analysis for each level was carried out in triplicate.

The precision of the method was established by the study of repeatability (system precision), reproducibility (method precision) and intermediate precision. The repeatability was checked by making six injections of a solution containing 1 mg/ml each of I-VIII and % RSD was calculated for peak areas obtained for I-VIII. For reproducibility, 2 mg/ml each of six different solutions of I were prepared and analyzed. Intermediate precision was performed by a second analyst on a different day using a different instrument.

The robustness of the method was established by minor changes in chromatographic conditions by varying flow rate and pH of the mobile phase component A. The flow rates were changed from 1 ml/min to 0.9 ml/min and 1.1 ml/min, while pH was changed from 4.0 to 3.9 and 4.1. In all these experiments, concentration was 1 mg/ml each for the drug and II-VIII.

Sample solutions of I were prepared at a concentration of 2 mg/ml each in 2N HCl, 2N NaOH and 10% H2O2 and were kept at room temperature. The drug was also exposed in solid and solution (2 mg/ml solution in water) to sunlight and UV rays. Solid samples of I were also kept at 105º and at melting point temperature of 158o. Additionally, 0.2% w/v solution of drug was prepared in water as a control sample. All the samples were analyzed at 0 hours and after 5 days by HPLC.

The objective was to develop a single HPLC method for the simultaneous detection and quantitation of all the known and unknown impurities in zonisamide (I). As per the reported route of synthesis[4], the known related substances in zonisamide (I) are the starting material II, intermediates III-VI and process impurities VII-VIII. Based on the absorption maxima observed for I-VIII, the detection wavelength was set at 280 nm. Different octadecylsilyl silica columns like Lichrospher RP 18e, Waters Symmetry, Hypersil ODS, and mobile phases comprising of phosphate, acetate and/or formate buffers in combination with methanol or acetonitrile or both were tried under gradient and isocratic conditions to develop a suitable HPLC method for the detection and quantitative determination of II-VIII in zonisamide (I). The effects of pH of mobile phase and column oven temperature on resolution between the components and tailing factors were also studied. Both column temperature and pH of the mobile phase were found to have a strong inß uence on the resolution and peak shapes. A reasonably good separation between the components with good peak shapes was achieved on a Waters Symmetry C8 (150×3.9 mm), 5 µ column using a linear gradient of mobile phase consisting of a mixture of 0.02 M potassium dihydrogen phosphate (anhydrous)-acetonitrile-methanol, pH 4.0 at a ß ow rate of 1.0 ml/min and column temperature at 35o. The linear gradient was 100% mobile phase component A (0.02 M aqueous potassium dihydrogen phosphate-acetonitrile-methanol (75:10:15 v/v/v), pH adjusted to 4.0 with orthophosphoric acid) to 100% mobile phase component B (0.02 M aqueous potassium dihydrogen phosphate-acetonitrile-methanol (15:40:45 v/v/v), pH 2.0 with orthophosphoric acid) over a period of 45 min. The retention times (RT) and relative retention times (RRT) obtained under these chromatographic conditions are presented in Table 1. The results indicated good resolution between the components with satisfactory peak shapes. A representative chromatogram depicting resolution between all the components I-VIII is shown in fig. 2.

Table 2 summarizes the results obtained for LOD, LOQ and linearity for compounds I-VIII. The LOD and LOQ values obtained for I-VIII were in the range of 0.001% to 0.007% and 0.0035% to 0.25% respectively (with respect to sample concentration of 2 mg/ml). The LOD and LOQ values were much below the specified limits (< 0.10%) for I-VIII, indicating that the method was sensitive and capable to detect and quantify known impurities II-VIII and also unknown impurities (fig. 3). Linearity was established in the range of LOQ level to 0.2% (limit concentration for II-VIII: < 0.10%) having regression coefficients in the range of 0.9958 to 0.9999.

The mean recoveries at each level for all the components I-VIII, given in Table 3, ranged between 97.2-100.7% (Acceptance criteria: 90-110%) and % RSD was between 0.1% and 2.7% (Acceptance criteria : NMT 10.0%) establishing that the method was accurate for the quantitative determination of all the known and unknown impurities. 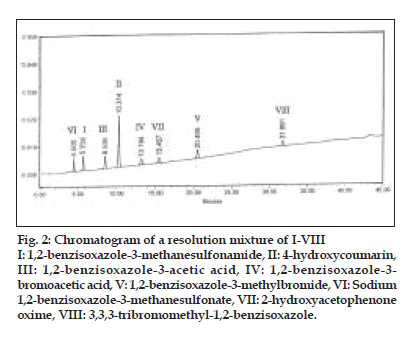 The % RSD of peak areas for I-VIII were 1.46, 0.84, 3.08, 1.43, 1.19, 1.16, 1.40 and 1.51 respectively (acceptance limits : NMT 5.0%). This confirmed the repeatability of the method. In case of reproducibility, the contents of II-VIII and the unknown impurities (at RRTs 0.59, 1.48, 1.69 and 2.14) in all the six injections were found to be almost same and below 0.05%, thus establishing the reproducibility of the method. Intermediate precision, performed by second analyst on a different day using a different instrument gave results comparable with those of first analyst. The robustness results are summarized in Table 4. The resolution between I and VI was decreased, except in case of pH 4.1, while asymmetry was found to increase when the flow rate and pH of the mobile phase component A were changed. However, the chromatographic elution pattern remained unaffected, establishing the robustness of the method. 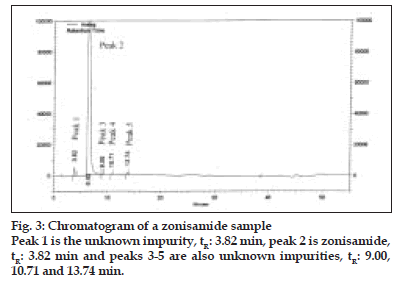 aLOD, LOQ and Linearity values are in % with respect to sample concentration of 2 mg/ml.

Table 2: Lod, Loq And Linearity Data For I-Viii A. 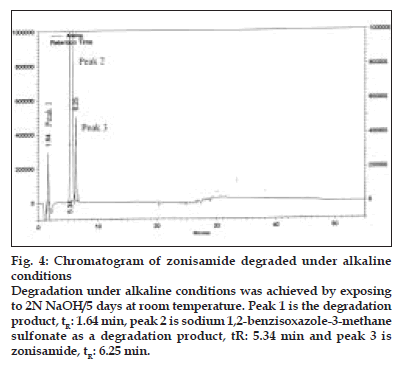 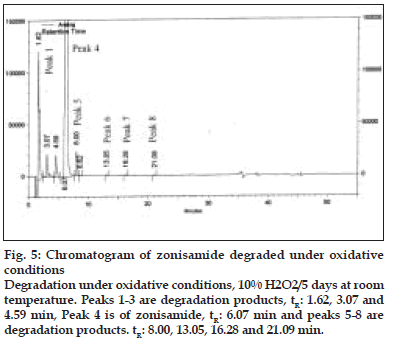 *Recommended method, wherein ßow rate is 1 ml/min and pH of mobile phase is 4.0.

Table 4: Effect Of Flow Rate And Ph Changes On Resolution And Symmetry Factor.

On forced degradation, no degradation was observed under acid, light and elevated temperatures, while under alkaline conditions, I was converted to VI by 91.89% by area normalization (fig. 4). Under oxidative conditions, I degraded by about 3.2%. All the degradation products (RRT 0.27:2.10%, RRT 0.50:0.44%, RRT 0.76:0.39% and RRT 1.32:0.33% by area normalization) were well resolved from the principal peak (fig. 5). The peak purity analysis of all the samples using PDA detector confirmed that there was no co-eluting peak in the principal peak of I, thus, establishing both impurity and stabilityindicating nature of the method.

A single reversed-phase gradient HPLC method was developed and validated for the simultaneous detection and quantitation of known and unknown impurities formed during the synthesis of zonisamide (I). The method proved to be sensitive, selective, precise, linear, accurate and stability-indicating. The method was successfully applied to the analysis of I demonstrating acceptable precision and adequate sensitivity for the detection and quantitation of the impurities. So it may be reasonable to claim that the method can be extended to the analysis of drug formulations and stability samples as well.

The authors thank Dr. V. Gore and his team for providing us authentic samples of zonisamide and the impurities II-VIII. The authors express their gratitude to Mr. Anand Apte, former Managing Director for continuous support and encouragement.