A simple, selective, precise and stability-indicating high-performance liquid-chromatographic method of analysis of cilostazol in pharmaceutical dosage form was developed and validated. The solvent system consisted of 10 mM phosphate buffer (pH 6.0):acetonitrile:methanol (20:40:40). Retention time of cilostazol in C18 column was 5.7 ± 0.1 min at the flow rate 1.3 ml/min. Cilostazol was detected at 248 nm at room temperature. The linear regression analysis data for the calibration plots showed good linear relationship with correlation coefficient value, r 2 =0.9998 in the concentration range 100-3200 ng/ml with slope 43.45 intercept 156.75. The method was validated for linearity, range, accuracy, precision and specificity. Cilostazol was determined in tablet dosage form in range of 99.58-100.67% with 0.4600 standard deviation. Stress studies were conducted in acid and alkali hydrolysis with gradual increasing concentration. Cilostazol was found to be stable in various concentrations of acidic and alkaline.

A number of pharmaceutical substances have ester or amide as functional groups which may undergo hydrolysis in solutions or in aqueous suspension. Hydrolytic reactions involve nucleophilic attack on labile bonds such as lactam, ester, amide, imine and so on, by water on the drug in the solution and it follows first order kinetics [1,2]. Literature reveals that hydrolytic degradation is performed in neutral, acidic and alkaline conditions.

Cilostazol, chemically 6- [4-(1-cyclohexyl-1H-tetrazol- 5-y1)-butoxy]-3,4-dihydro-2(1H)? quinolinone (fig. 1), is a quinolinone derivative that inhibits cellular phosphodiesterase III, and is used for inhibition of platelet aggregation and as a vasodilator [3-6]. Literature survey reveals that only one chromatographic method is reported for quantitative analysis of cilostazol and its metabolites in human plasma [7]. 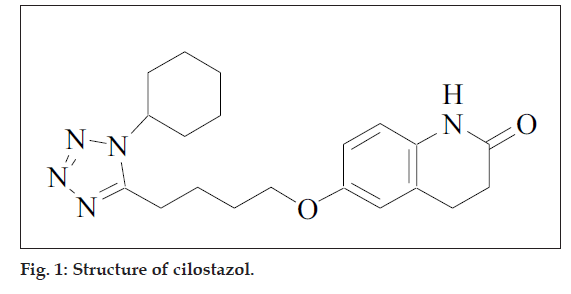 Accurately weighed about 100 mg cilostazol was dissolved in 50 ml methanol (HPLC grade) and volume was made upto 100 ml with triple distilled water (stock A, 1000 µg/ml). The stock solution was diluted to obtain 0, 100, 200, 400, 800, 1600 and 3200 ng/ml solution of cilostazol. The dilutions were fillered through 0.45 µm membrane filter and injected. Chromatograms were plotted and repeated for six times. A calibration graph was plotted between the peak AUC vs concentration and regression equation was AUC= 43.45X+156.75 with correlation coefficient r2 = 0.9998. The method was validated according to ICH guidelines8. RSD values of all validation parameters are far less than 2% (Table 2).

Twenty tablets (Pletoz-50, Hetero Drugs Ltd., Hyderabad) were weighed and finely powdered. Powder equivalent to 100 mg of cilostazol was dissolved in 50 ml methanol (HPLC grade) and volume was made upto 100 ml with triple distilled water. The sample was sonicated for 15 min and filtered through Whatmann paper no. 41 (stock P, 1000 µg/ml). 10 milliliters of this stock was diluted up to 100 ml with 50% aqueous methanol (stock Q, 100 µg/ml) and then further diluted up to 100 ml obtain stock R (10 µg/ml). Aliquots of 10 µg/ml were diluted to obtain concentration of 800 ng/ml and filtered through 0.45 µm membrane filter. Samples were analysed and statistical calculations were carried out (Table 3).

Hydrolytic degradation under acidic conditions was performed by dissolving 100 mg cilostazol in 50 ml acetonitrile (HPLC grade) and volume was made upto 100 ml with 2 N HCl. The solution was refluxed on water bath at 600 for 5 h. Aliquots of above solution was neutralized with 1 N NaOH and diluted with diluent to obtain 800 ng/ml solutions. The sample solution was analysed and chromatogram was recorded. No degradation of cilostazol was found in 1 N HCl at 600 after 5 h. Further, the solution was degraded in 2 N HCl and 5 N HCl and was found to be stable.

Cilostazol is also insoluble in hydrochloric acid and methanol as cosolvent is avoided with high concentration of HCl due to presence of amide group in cilostazol. Methanol may react with amide group and produce significant experimental artifact components [9]. The acidic degradation of cilostazol was performed in 50% acetonitrile 1 N, 2 N and 5 N HCl at 600 for 5 h and no peaks (except cilostazol at 5.7 ± 0.1 min) were seen after treating by above stress conditions. Thus, cilostazol is also stable in 50% acetonitrile HCl.