The present research work was carried out to determine stability of cefditoren pivoxil, an orally absorbed prodrug that is rapidly hydrolysed by intestinal esterases to the active cephalosporin cefditoren. Cefditoren was subjected to stress conditions recommended by the International Conference on Harmonization of Technical Requirements for Registration of Pharmaceuticals for Human Use guideline Q1A (R2). Cefditoren pivoxil was susceptible for degradation under acidic, alkaline and neutral hydrolytic conditions while it was stable under photolytic and thermal stress conditions. Separation of cefditoren and degradation products were carried out by using HPLC. The unknown degradation products were characterized by liquid chromatography-mass spectrometry/time of flight studies. Structures were proposed for each fragment based on best possible molecular formula and complete degradation pathways were reported for cefditoren and its degradants.

Cephalosporins are ß-lactam antibiotics clinically useful for treatment of variety of infectious conditions. Compared to penicillins, these are hydrolytically more stable, but undergo different chemical and enzymatic transformations owing to substitution at C-3 and side chain at C-7. Degradation studies of cephalosporins have helped in isolation, purification and discovery of new agents [1]. Discovery of new cephalosporins was also triggered due to of multidrug resistances among microorganisms [2]. Severe biological interactions [3], immunological reactions [4] and sometimes fatal conditions [5] have been reported by degradation products of cephalosporins.

Cefditoren pivoxil (CEFP) is a third generation oral cephalosporin active against respiratory tract pathogens, hence used for treatment of acute exacerbations of chronic bronchitis (AECB) and community-acquired pneumonia [6]. Chemically it is (-)-(6R,7R)-2,2-dimethylpropionyloxymethyl7- [(Z)-2- (2-aminothiazol-4-yl)-2-methoxyiminoaceta-mido]-3- [(Z)-2-(4-methylthiazol-5-yl)ethenyl]-8-oxo-5-thia-1- azabi-cyclo [4.2.0] oct-2-ene-2-carboxylate (fig. 1).Till date the drug is official in Japanese Pharmacopoeia and Martindale: the extra pharmacopoeia [7,8]. Literature survey showed various methods reported for estimation of CEFP from pharmaceutical formulations and from plasma, such as spectrophotometric [9-14], UPLC [15], HPLC [16-21], HPTLC [22,23], electroanalytical [24] and thermal [25] methods. Comparatively few reports were published on stress degradation study and development of stability-indicating method of CEFP [26-29] according to ICH guidelines ICH Q1A (R2) [30]. Till date, there is no report with regard to characterization of degradation products of CEFP; hence present research work is undertaken considering general interest. 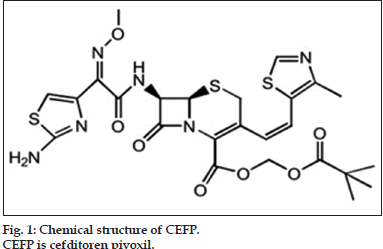 Stress studies were carried out as per the ICH guideline Q1A (R2). The drug was exposed to different degradation conditions namely hydrolysis, oxidation, dry heat and photolysis. All the stress conditions were optimized to achieve 10-15% degradation of drug. Response of drug was monitored by HPLC using DAD detector set at 230 nm wavelength. Characterization of degradants generated during different stress condition was performed with LC-MS/TOF system in positive ESI mode for fragmentation pattern and accurate masses. All operating parameters optimized for LC-MS/TOF system are mentioned in Table 1.

CEFP was dissolved in methanol to obtain a stock solution with a concentration of 1000 µg/ml. Hydrolytic degradation of CEFP was carried out under acidic, alkaline and neutral conditions separately by taking 1ml each of HCl (0.1 N), NaOH (0.01 N) and water with 1 ml of 1000 µg/ml CEFP at ambient temperature for 3.0 h. Samples were neutralized with equal strength of acid or base after required exposure. Samples treated with acid were neutralized by using equal strength of base and vice versa. For oxidative stress 1 ml of CEFP stock solution was treated with 1 ml of 10, 15, and 30% H2O2 at room temperature for 24 h. Effect of dry heat (thermal degradation) was studied on solid state while effect of light (photo degradation) was studied on solid and solution state conditions. In case of thermal degradation, the solid drug contained in sealed glass ampoule was heated in an oven at 60° for a period of seven days. Control sample was maintained in the same way at room temperature. During photo degradation, solid drug powder was exposed to fluorescent light (1.25 million lux hours) and UV light (200 Whm-2) in a photo stability chamber along with control samples. All standard and control samples kept for stability study were covered with aluminum foil. Optimized stress conditions were shown in Table 2.

Preparation of samples for HPLC analysis

All the stressed samples were diluted with the help of diluent (methanol:buffer, NH4CH3CO2, pH=3.5,50:50 v/v) to obtain concentration of original drug (100 µg/ml) and injected in HPLC system. Samples of thermal and photo degradation (solid state) were weighed accurately and diluted appropriately with diluent to obtain final concentration of 100 µg/ml of CEFP. All the stressed samples after mixing in equal volume were used for the development of stability indicating assay method.

CEFP is a weak acid with pKa value of 4.2 at 25° Most of the reported HPLC methods were developed on C18 column by using combination of acetonitrile/methanol with buffer (pH in the range of 2.0 to 6.0). Therefore it was aimed to develop simple and economic LC method by using combination of methanol and buffer (NH4CH3CO2, pH=3.5, 25mM). Several trials were performed on HiQSil C18 (250×4.6 mm, 5 µ) column at 230 nm (wavelength maximum of CEFP) to achieve optimum separation of the drug and its degradation products (DPs). Initially individual stressed samples were analyzed followed by their mixture. Method was validated according to ICH guideline Q2 (R1) [31]. For linearity, test solutions were prepared from stock solution (1000 µg/ml in methanol) at five concentration levels in the range of 25 to 250 µg/ml. All dilutions were prepared in triplicate and peak area was measured. The peak area versus concentration data was processed by least-square linear regression analysis and correlation coefficient of curve was calculated. Standard addition method was used to determine accuracy (recovery) of the method. Mixture of stressed samples containing 100 µg/ml of remaining CEFP was spiked with three known concentrations of pure drug such as 50, 100 and 150 µg/ml. All recovery samples were prepared in triplicate and injected for analysis. Percent recovery of the added pure drug was calculated. The intraday and interday precision was carried out by analyzing 50, 100 and 150 µg/ml drug solutions prepared in triplicate on the same day and on consecutive day. The specificity of the method was established by peak purity profiless and resolution between drug and amongst all the degradants.

The fragmentation pattern of the drug was studied by LC-MS/TOF analysis. All mass spectra were recorded in positive electrospray ionization mode (ESI) in the range of 50?800 m/z. Drug solution (10 µg/ml diluted in methanol) was analyzed by injection into MS/TOF using syringe pump. Ionization conditions were optimized to obtain molecular ion peak and subsequent fragmentation pattern. The optimized parameters are depicted in Table 1. The masses of all peaks were recorded up to fourth decimal precision. The mixture of stressed sample was also subjected to LC-MS/TOF analysis using optimized parameters of drug (Table 1). Developed gradient elution method was used for analysis. Fragmentation pattern was established for each degradant from obtained mass spectrum and accurate m/z values.

The degradation products generated under different stress conditions are indicated as I and II in accordance with the sequence in which peak appears from left to right on the HPLC chromatogram (fig. 2). Details of two degradation products generated under respective stress conditions are tabulated below HPLC chromatogram (fig. 2). 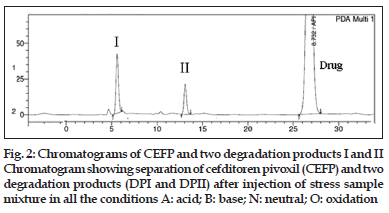 It was observed that CEFP was prone to hydrolytic (acidic, basic and neutral) and oxidative stress conditions, while it was stable under thermal and photolytic stress conditions. Desired separation was achieved by using proportion of methanol (A) and ammonium acetate buffer solution (B) (25 mM, pH adjusted to 3.5 by using formic acid) in gradient mode (Tmin/A:B; T0/50:50; T30/70:30; T40/50:50). The developed method was validated with respect to specificity selectivity, linearity, accuracy and precision. The mixture of degradants was analyzed by using developed HPLC method. The method was found to be specific and selective as peaks of degradants were well-resolved from the drug and from one another. Typical chromatogram is shown in fig. 2. The resolution amongst the peaks was observed to be >2. The peak purity of CEFP and degradants were recorded using DAD detector (Table 3) and found to be >0.999.

Excellent correlation was observed between response for the drug (peak area) and concentration in the range of 25?250 µg/ml. Corresponding slope and correlation coefficient (r2) were 84014 and 0.9996 (Table 4). Determination of intraday and interday precision was performed at three different concentrations (50, 100 and 150 µg/ml) in the range. Results are indicated in Table 5. The RSD (%) values for intraday and interday precision were found to be <2, which indicates that method is reproducible.

Recovery studies were performed by adding pure drug to the degradation samples. Good recoveries were obtained when a mixture of stressed samples were spiked with the drug at three given concentration levels. (mean recovery=99.30%). The results are shown in Table 6. CEFP was subjected for LC-MS/ TOF study. The data obtained from mass spectra is tabulated (Table 7). The presence of molecular ion peak (m/z=621.1265) was confirmed as it closely matches with exact mass of CEFP which is 621.1260, also there was presence of peak next to molecular ion peak at m/z value of 643.1070 which corresponds to (M+Na)+.

Table 7: Summary Of Lc?Ms/Tof Data Of Drug And Degradants

Fragmentation of drug led to formation of total eight fragments. The most probable molecular formula is calculated for each fragment from experimental accurate mass values with the help of elemental composition calculator. This data was helpful to establish origin of each fragment and in understanding fragmentation pathway of the drug. The major fragments of drug had m/z values 591.109, 507.0468, 491.0615, 461.0429, 447.0714, 350.0660, 282.0474, and 240.0702. From available mass data structures were proposed for each fragment. The complete fragmentation pathway of drug is shown in fig. 3. The structural elucidation of DP-I and DP-II were achieved with the help of their major fragments observed in MS/TOF studies and comparison with the fragmentation pattern of drug (fig. 3). Presence of molecular ion peak (m/z 507.0499) of DP-I was confirmed from peak of sodium adduct (m/z 529.0369). It was observed that DP-I was formed by loss of pivoxil [(CH3)3C-CO-O-CH2] moiety. Best possible molecular formula was generated for DP-I with the help of mass frontier software and elemental composition calculator. Fragmentation of DP-I led to formation of total four fragments having m/z values 477.0397, 350.0631, 282.0451 and 240.0754. From available mass spectral data structures were assigned for DP-I and successive fragments. The fragmentation pathway for DP-I is outlined in fig. 4. The presence of molecular ion peak (m/z 521.0730) of DP-II was confirmed from sodium adduct peak (m/z 543.0599). It was observed that DP-II was formed by loss of pivaloyloxy [(CH3)3C-CO-O] moiety from drug CEFP. Fragmentation of DPII led to formation of five fragments having m/z values 506.0392, 477.0376, 350.0667, 282.0444 and 240.0891. Best possible molecular formula was generated for DP-II with the help of mass frontier software and elemental composition calculator. From available mass spectral data structures were assigned for DP-II and successive fragments. The fragmentation pathway for DP-II is outlined in fig. 5. Degradation pattern of CEFP was thus studied by exposing drug to ICH recommended stress conditions. The drug was found more susceptible towards hydrolytic degradation while it is resistant to thermal and photolytic degradation. Drug and degradant peaks were well separated from each other by RP-HPLC. DP-I and DP-II was formed under acidic, basic and neutral hydrolytic stress. For identification and characterization of unknown degradants, drug and all the degradants were subjected for LC-MS/TOF study. Two unknown degradants (DPs I and II) were characterized. From available mass spectral data complete degradation pathway for drug (fig. 3) and degradation products were sketched (figs. 4 and 5).

The mechanistic approach is provided for hydrolytic degradation of CEFP (figs. 6 to 8), it was found hydrolyzed to original drug cefditoren (DP I). This information is being reported for the first time. 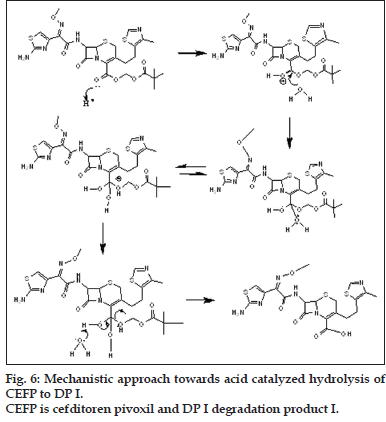 Fig. 6: Mechanistic approach towards acid catalyzed hydrolysis of CEFP to DP I.CEFP is cefditoren pivoxil and DP I degradation product I. 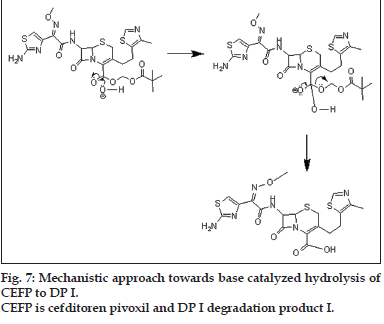 Fig. 7: Mechanistic approach towards base catalyzed hydrolysis of CEFP to DP I. CEFP is cefditoren pivoxil and DP I degradation product I. 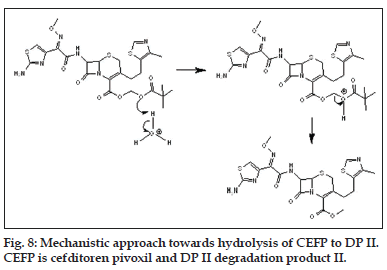