The present study was designed to evaluate the antioxidant and antibacterial activity of methanol extract of Kyllinga nemoralis. Six different in vitro antioxidant assays including 2,2-diphenyl-1-picrylhydrazyl, hydroxyl radical, superoxide anion radical, hydrogen peroxide radical, ferric reducing antioxidant power assay and reducing power were carried out to ensure the scavenging effect of the plant on free radicals. In addition, total antioxidant capacity assay, total phenolic contents, tannins, flavonoids and flavonol contents of the plant were also analysed by the standard protocols. Kyllinga nemoralis exhibited high antioxidant activity on 2,2-diphenyl-1-picrylhydrazyl assay (IC 50 = 90 μg/ml), superoxide radical scavenging assay (IC 50 = 180 μg/ml) and hydrogen peroxide radical scavenging assay (IC 50 = 200 μg/ml), compared with standards. These observations provide comprehensible supporting evidence for the antioxidant potential of the plant extract. Reducing power (IC 50 = 213.16 μg/ml) and hydroxyl radical scavenging activity (IC 50 = 223 μg/ml) of the plant extract was remarkable. The methanol extract of K. nemoralis exhibited significant antimicrobial activity against Gram-positive human pathogenic bacteria. Standard in vitro antioxidant assays assessed the electron donating ability of the plant extract in scavenging free radicals. The inhibitory effect of the plant extract against bacterial pathogens may be due to the presence of phytochemicals. Thus, the results suggest that Kyllinga nemoralis is a potential source of antioxidants and could serve as the base for drug development.

Free radicals and reactive oxygen species (ROS) including superoxide radical, hydroxyl radical, singlet oxygen and hydrogen peroxide are the by-products arising from numerous physiological and biochemical processes. Overproduction of ROS results in oxidative stress, which is responsible for the development of cell injury, aging, cardiovascular diseases, neurodegenerative diseases, autoimmune disorders, rheumatoid arthritis and cancer [1,2]. Natural antioxidants from plant sources are a group of compounds with quite different chemical structures. They are able to neutralise free radicals by inhibiting and scavenging them, thus providing protection against the onset of many diseases [3]. The two most commonly used synthetic antioxidants such as butylated hydroxyanisole (BHA) and butylated hydroxytoluene (BHT) induce DNA damage due to their toxicity and may have harmful effects on the lungs and liver of human beings. Therefore, screening of plants on the basis of their antioxidant activity is a challenge for the scientists [4].

Kyllinga nemoralis (Hutch and Dalz) (Family; Cyperaceae) is a perennial herb, used in traditional folk medicine to treat many diseases and disorders. Leaves of the plant are used as antivenom, relief of malarial chills, pruritus of the skin, thirst attributable to fever and diabetes. The paste of rhizomes mixed with milk is used internally for worm infection and the rhizome alone is used to treat hepatopathy, splenopathy, fever, tumour and diabetes [5]. The objective of the present study was to evaluate the in vitro antioxidant and antibacterial activity of methanol extract of K. nemoralis. To the best of our knowledge, there is no literature documenting the in vitro antioxidant activity of K. nemoralis. This is the first study where we are reporting the antioxidant and antimicrobial activity of methanol extract of K. nemoralis.

Whole plant of K. nemoralis was collected from Pandalur, Nilgiris District, Tamil Nadu, India. About 100 g of powder was continuously extracted with 500 ml of methanol and the residue was filtered and concentrated in rotary evaporator at 40° under reduced pressure. The obtained crude extract was stored in airtight container at 4° for further use.

Total antioxidant capacity of the methanol extract of K. nemoralis was evaluated by the method of Prieto et al. [12] and it was expressed as mg BHT equivalent per gram dry weight. Total flavonoid content was measured based on the method described by Jia et al. [13] and it was expressed as mg/g quercetin equivalent using the following equation based on the calibration curve: Y = 0.002x, R2 = 0.97, where x was the absorbance and y was the quercetin equivalent (mg/g).

The inhibitory activity of different concentrations of K. nemoralis (50-250 μg) on DPPH ranged from 36.48 to 88.88%, whereas BHT ranged from 29 to 87%. The results showed that the DPPH radical scavenging activity was more efficient than BHT. The IC50 value of K. nemoralis on DPPH radical was found to be 90.94 μg/ml, which was compared with BHT (IC50=109.07 μg/ml). Several studies reported that the DPPH radical is reduced by the hydrogen donating ability of phenolics and flavonoids. 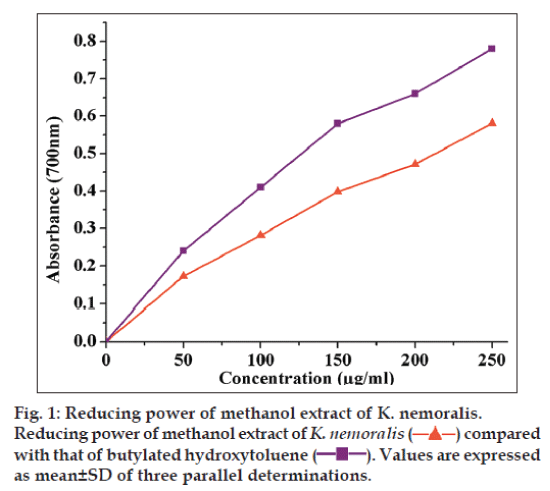 The IC50 value of the plant extract was 213.16 μg/ml and that of BHT was 122 μg/ml (Table 2). Reducing power may be due to the presence of polyphenols, which can donate electrons and scavenge free radicals by converting them into more stable products and can terminate the radical chain reaction [17]. 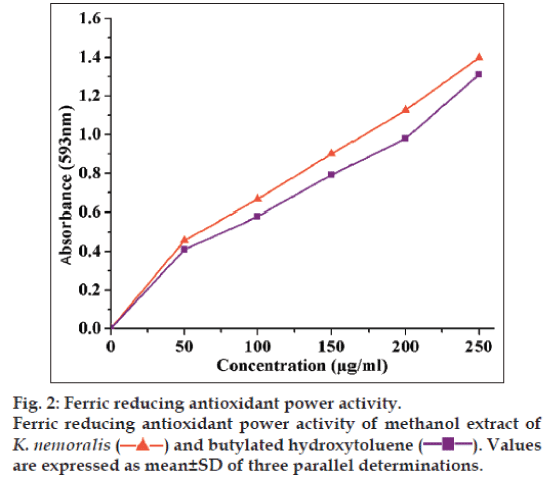 The antioxidants in the plant extract can scavenge hydroxyl radical by donating hydrogen atoms and accelerating the conversion of H2O2 to H2. It can act as Fe3+ ion chelators of the system, thereby preventing them from complexing with the deoxyribose [18]. The methanol extract showed scavenging activity on •OH radicals ranged from 22.48 to 57.24% (50-250 μg), whereas ascorbic acid showed scavenging activity that ranged from 20.5 to 84.28% (50-250 μg). The IC50 value of plant extract was found to be 220.49 μg/ml, which was compared with ascorbic acid (IC50=143.72 μg/ml), attributed to their antioxidant activity. Polyphenols play an important role in the stabilisation of lipid oxidation and may contribute directly to antioxidative action. It is suggested that polyphenolic compounds have inhibitory effects on mutagenesis and carcinogenesis [19]. Many plant species were tested for their total phenolic content to correlate with their antioxidant activity. Therefore, it is essential to find the total phenolic content of K. nemoralis. In the present study, the plant possessed total phenolic content of 51.6±0.007 mg of gallic acid equivalents/g dry weight of plant extract (Table 2).

Flavonoids are widely distributed group of plant phenolic compounds responsible for the antioxidant activity of the plants. It has been proven to display a wide range of pharmacological and biochemical activities including radical scavenging properties [20]. Methanol extract of K. nemoralis exhibited the highest flavonoid and flavonol contents (86.36±0.020 and 70.45±0.003 mg of quercetin equivalents/g dry weight of plant extract, respectively).

Natural antimicrobial compounds from plants act as therapeutics that can inhibit the growth of pathogens and have been used to overcome the side effects associated with the synthetic antimicrobial agents. The results of the present study revealed that the methanol extract showed significant inhibitory activity against all the five different human pathogenic bacteria. Among the five different bacteria, the highest antimicrobial activity was observed on S. pneumonia and the least antibacterial activity was observed on S. saprophyticus. The plant extract showed almost similar zone of inhibition against other three organisms (S. aureus, S. mutans and E. faecalis). Methanol control was not found to inhibit any pathogenic bacteria (fig. 4). The inhibitory activity of the plant extract could be attributed to the presence of phenols since it controls the growth and multiplication of bacteria by disturbing the function of bacterial cell membranes. Thus, the present study concluded that the methanol extract of K. nemoralis is a potential source of natural antioxidants to react against free radicals such as DPPH, superoxide radical, hydrogen peroxide radical and hydroxyl radical. Our findings revealed that the K. nemoralis was found to contain a noticeable amount of total phenols, flavonoids, flavonols and tannins. In addition, it was observed that methanol extract showed a dose-dependent inhibition on the growth of human pathogenic bacteria. Radical scavenging capacity on different free radicals and antimicrobial activity of the plant extract are, may be, due to the presence of phenols and flavonoids. At present, work is in progress for the isolation and characterisation of bioactive compounds from K. nemoralis.