Impact of Continuing Pharmacy Education on the Knowledge, Attitude and Practice of Community Pharmacists about ADR Monitoring and Reporting

Adverse drug reactions (ADRs) are the most common causes of morbidity, mortality and poor economical outcomes. Therefore post marketing surveillance is very important for monitoring the risks and benefits of pharmaceutical products after they have been marketed. The roles of pharmacists have expanded to other aspects of patients’ care, which include reporting ADR, improving patients’ health and economic outcomes[1]. The pharmacists traditionally have been playing the role of preparing and dispensing medications, with no or minimal emphasis on providing services to the patients[2]. Pharmaceutical care is a patient centric and outcome oriented process that requires the direct involvement of pharmacists with the patients to prevent diseases, promote health and drug therapy monitoring to assure the safety and efficacy of medications[3]. Community pharmacy as healthcare organization has a greater scope for providing trustworthy support and advice on health and drugs to people and delivery of such professional services by community pharmacies shall contribute to improving health outcomes[4,5]. Assessing the knowledge, attitude and practice of community pharmacists relating to spontaneous reporting of ADRs is very important. When pharmacists have sufficient knowledge about ADR reporting process, they can also improve other healthcare professionals’ knowledge about ADR reporting[6]. In India, studies pertaining to ADR reporting in community set-up are found to be limited due to poor knowledge about the professional obligations and community pharmacists are confined only to the trade. As adequate motivation to community pharmacists will strengthen the reporting system, there is a need for designing and implementing the ADR monitoring and reporting system in community pharmacies[7]. In these contexts, the present study was designed to educate and train the community pharmacists in pharmacovigilance services through continuing pharmacy education (CPE) and assess the knowledge, attitude and practice of ADR monitoring and implementation of ADR reporting in their practice.

This was a prospective interventional community study conducted at Nilgiris district in the southern part of India for a period of six months. A 26-item selfadministered questionnaire was designed to record participants’ knowledge, attitude and practice about ADRs and barriers to their reporting. The questionnaire was designed based on the previously published studies[8-10] that contained seven items to assess the pharmacists’ knowledge about ADR, its reporting procedures, eight items to evaluate the pharmacists’ attitude towards ADR reporting and eleven items for assessing their practice towards ADR monitoring apart from few questions to capture the relevant demography of the respondents. While many of the questions were given with multiple choice answers from which the respondents were expected to select any one answer, which would be most appropriate and five questions towards assessing the attitude had options viz. strongly agree, agree, not sure, strongly disagree and disagree.

CPE program was designed for community pharmacists to educate and train them in ADR monitoring and reporting services and the information about the conduct of CPE was disseminated through pamphlets. The contents of the educational material were customized to include the issues on pharmacovigilance and need for ADR reporting in the community setting. The materials were delivered through didactic lectures, demonstrations, and interactive discussions conducted periodically to the community pharmacists both in the study center and respective pharmacies so as to provide the participants, the knowledge about pharmacovigilance concepts and the necessary skills to monitor and report ADRs. The key learning objectives of the CPE program included understanding the epidemiology of ADRs and drug safety, highlighting the concepts of pharmacovigilance, pharmacists’ roles in ADR monitoring and reporting, current scenario in India and importance of reporting ADRs by community pharmacists.

In the CPE program, ADR reporting form and ADR documentation form were distributed to the pharmacists and demonstrations were given for filling the same. Earlier, the theoretical concepts of ADR monitoring included WHO definition of the ADR, how to report the ADRs, where to report the ADRs, causes of the ADRs, risks factors of ADRs, how to assess the causality of the ADRs and the role of pharmacists in preventing and reporting of ADRs were delivered through appropriate audio visual aided lectures. ADR awareness posters were also prepared and distributed for displaying in prominent places at community pharmacies, which most of the customers could visualize and become aware of this service.

Pre-evaluation was done through the questionnaire in order to assess the baseline knowledge, attitude and practice of the community pharmacists about ADR monitoring and reporting system. After the CPE program, the same questionnaire was administered to assess the outcome to find out improvement, if any in the knowledge and attitude of the participants towards ADR monitoring and reporting. The same questionnaire was also administered at the end of six months especially to assess the change in their practice which would have not been captured in the post test immediately after CPE.

The study was approved by the Institutional Review Board (IRB) of JSS College of Pharmacy, Ooty and all participants gave written informed consent prior to interviews or survey participation. Questions that could disclose the personal identity of the pharmacists or pharmacies (i.e. names, contact numbers, name of pharmacy) were avoided.

Data analysis was done using the Statistical Package for Social Science (SPSS) Release 21. Both descriptive and inferential statistics were used wherever appropriate. Frequencies and percentages were used to describe the respondents’ demographic information and professional characteristics. A p-value of 0.05 or less was considered to be significant.

Pharmacists’ knowledge about the concept of ADR reporting, form used for ADR reporting, how and where to report ADRs have significantly (p<0.05) increased to 100 % in the post CPE survey from 84, 45, 51 and 36 % during pre CPE survey, respectively (fig. 1A). The knowledge that all the stakeholders of health that include doctors, pharmacists, nurses and patients can report ADRs has also increased from 31 to 100 % from pre CPE to post-test with statistical significance (p<0.05; fig. 1B). 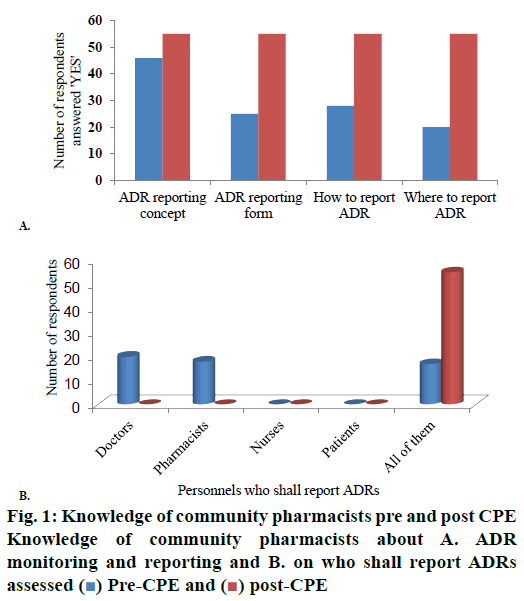 Prior to CPE, none of the pharmacists’ chosen the option of need for reporting ADRs associated with herbal medicines and at post CPE survey 100 % pharmacists agreed upon the requirement of reporting ADRs for medical devices, vaccines and blood products and allopathic medicines, which is depicted in fig. 2 and these differences were found statistically significant (p<0.05). 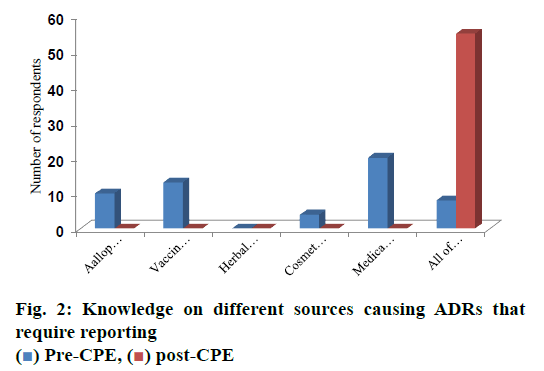 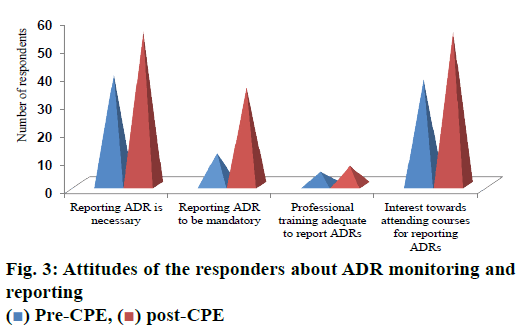 Figure 3: Attitudes of the responders about ADR monitoring and reporting

Prior to CPE about 82 % of the respondents opined that availability of reporting forms was the barrier and post CPE, only 18 % continued to feel that the same as a barrier (p<0.05). Availability of time was felt as the barrier by almost half of the respondents both at pre and post CPE (55 and 51 % respectively; p>0.05). Sixty four percent of them felt lack of motivation as the barrier for reporting ADRs prior to CPE was reduced to 18 % post CPE (p>0.05). About 73% of them claimed that lack of knowledge as a barrier prior to CPE and that was reduced significantly (p<0.05) to 13 % in the post CPE survey (fig. 4). 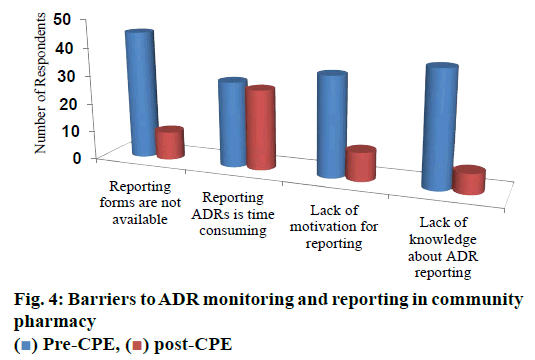 Figure 4: Barriers to ADR monitoring and reporting in community pharmacy 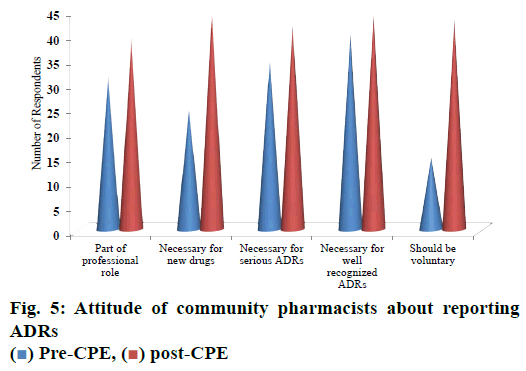 In the repeat survey conducted after 6 mo, 11 % (n=6) of respondents reported that they have a system of monitoring and reporting ADR in their pharmacies in comparison to 0 % at the baseline, i.e., prior to CPE program. All these pharmacists were male and in the age group of 31-40 y.

ADRs from 25 patients comprising 14 male and 11 female were reported by 6 community pharmacists. The age of the patients encountered the ADRs ranged between 30-59 y. The therapeutic classes of drugs associated with these ADRs and the various biological systems associated with such ADRs are shown in Tables 2. Causality assessment for the reported ADRs was done by using WHO scale and results are presented in Table 3. The severities of the suspected ADRs were assessed using modified Hartwig and Siegel Scale.

Table 3: Causality assessment of suspected ADRS -by who scale

The pharmacovigilance program of India (PvPI) requires all health care professionals to be involved in the monitoring and reporting of ADRs, but the responses towards their expectations are very limited compared with reporting from the developed countries. Though ADR reporting in India has got its momentum as many of the ADRs are being reported from the hospital setting, such activities in the community pharmacy setting is negligible or almost non-existence.

About 72 % of the respondents expressed ADR monitoring is necessary prior to CPE but 100 % agreement was seen during post CPE. Very importantly, the percentage of respondents both pre and post CPE was not changed much for the question about adequacy of professional training to report ADRs that showed the study participants require more training about ADR monitoring and reporting. This was supported by the response towards the interest to attend courses on ADR reporting by all the participants.

The participants had a poor attitude about reporting ADRs prior to CPE, which were improved with post CPE. Only about 45 % of the study participants expressed ADR monitoring was necessary for new drugs, prior to the CPE program that was increased to about 82 % during post CPE. Whereas in a study conducted at Oman, 20.5 % of the respondents answered that ADRs to be reported for new drugs[11]. Post CPE, almost about 82 % of the study participants responded that ADR reporting is necessary for all new drugs, serious reactions and reactions already recognized.

About 28 % respondents who said that ADR reporting should be voluntary had increased to 78 % during post CPE. In a study conducted at Bangalore, a metro city in south India, 90 % of the pharmacists agreed that ADR reporting as a voluntary act[12]. Nearly about 11 % of the respondents reported that they were practicing ADR reporting after 6 mo of post CPE assessment, which was null at the baseline. These pharmacists reported about 25 suspected ADRs. A survey report revealed that only 8 % of the community pharmacists received ADRs but only 1 % of them reported ADRs[12].

Among the ADRs reported, antibiotics, NSAIDs and antidiabetic agents were found to be the top three therapeutic classes. A study reported from UAE also revealed that antibiotics were the top class of drug for which ADRs were reported in most numbers[9]. Another study from Saudi Arabia revealed that NSAIDs and aspirin are the top ranked therapeutic agents caused ADRs[8]. Among the reported ADRs, the system affected by the reaction was found to be the gastro intestinal tract (40 %) followed by cardiovascular (36 %). The study reported from Alahsa, UAE also reported GIT as the most frequently affected organ system[9]. A study reported from China also claimed that gastro intestinal tract was the organ system mostly (34 %) affected by ADRs[13].

As per the classifications of WHO, probable ADRs were found more (32 %) followed by possible (24 %) and certain (20 %). Antibiotics cefixime, ceftriaxone, steroids dexamethasone and methylprednisolone, diuretics frusemide are the drugs caused ADR’s categorised as certain. Similar pattern of results were also reported from another study conducted in the nearby city (Coimbatore) with the values of 42, 23 and 30, respectively[14]. These ADRs were found 40 % each as mild and moderate and the severe were only 20 %[15]. The study conducted at Coimbatore had shown that 12 % reactions were severe and 49 % were moderate and remaining 39 % were classified as mild[14].

The authors acknowledge the JSS University, Mysore for their permission for the conduct of this work as a part of a Ph.D. dissertation of one of the faculty member.