Antioxidant potential of fruits of Artemisia nilagirica was studied using different in vitro models like 1,1-diphenyl-2-picryl hydrazyl, 2,2-azinobis-(3-ethylbenzothizoline-6-sulphonate), nitric oxide, superoxide, hydroxyl radical and lipid peroxidation. Both the ethanol and aqueous extracts of A. nilagirica fruits at 500 μg/ml showed maximum scavenging activity (89.33% and 89.14%) in quenching 1,1-diphenyl-2-picryl hydrazyl radical. The ethanol extract showed better scavenging activity (69.78%) of 1,1-diphenyl-2-picryl hydrazyl radical followed by the scavenging of nitric oxide radical (73.25%) compared to aqueous extract. In contrast, hydroxyl and superoxide radicals were effectively scavenged by aqueous extract. Total antioxidant capacity of ethanol and aqueous extracts at 500 μg/ml concentration was found to be 56.21 and 62.78 mg ascorbic acid equivalents, respectively. However, both the extracts showed only moderate lipid peroxidation inhibition activity. They were also found to contain considerable total phenols and flavonoids suggesting their role as an effective free radical scavenger. These findings suggest that phenolics and flavonoids in the fruits provide substantial antioxidant activity.

Free radicals have been implicated in producing liver cirrhosis, atherosclerosis, cancer and diabetes [1]. Reactive oxygen species (ROS) such as superoxide anion (O2-), hydroxyl radical (OH.) and nitric oxide (NO) inactivate enzymes and damage cellular macromolecules leading to injury through covalent binding and lipid peroxidation [2]. Antioxidants may offer protection against the oxidative stress by scavenging the free radicals and inhibiting lipid peroxidation that might prevent diseases [3]. Although organisms possess several natural defense mechanisms, such as enzymes and antioxidant nutrients, to prevent ROS production [4], continuous exposure for a long time could still lead to irreversible oxidative damage. Many plants have often been shown to contain substantial amounts of antioxidants including vitamin C and E, carotenoids, flavonoids and tannins and thus can be utilized to scavenge the excess free radicals from human body [5].

The fruits of Artemisia nilagirica were collected in Coimbatore, Tamil Nadu. The plant material was identified and authenticated at the Botanical Survey of India, Southern circle, Coimbatore and a voucher specimen (No. BPG 09) was retained in our laboratory for future reference.

About 50 g of air dried fruits were dissolved in 250 ml of ethanol and kept in an orbital shaker for overnight. The extracts obtained were filtered through Whatman No. 1 filter paper and the filtrate was collected. Ethanol was then removed under reduced pressure at 50º to yield (10.53 %) a concentrated extract. Fifty grams of powdered plant material was extracted in 250 ml of boiling water for 2 h and concentrated to half of the volume by boiling in a water bath. The resulting dark green extract was cooled and filtered using Whatmann No. 1 filter paper. It is stored in tightly capped brown bottle and lyophilized. The lyophilized sample was then stored in a desiccator for future use.

In vitro 1,1-diphenyl-2-picryl hydrazyl (DPPH) radical scavenging activity was measured by the spectrophotometric method [9]. To a solution of DPPH (200 μM) in methanol, 0.05 ml of the test compounds were added at different concentration (100-500 μg/ ml). Control was also maintained. After 20 min, the decrease in the absorbance of test mixture (due to quenching of DPPH free radicals) was read at 517 nm and percent inhibition was calculated using the formula (1), % inhibition = (control-test)/control×100

In this improved version [11], ABTS, the oxidant is generated by persulfate oxidation of 2,2-azinobis (3-ethylbenzoline-6-sulfonic acid)-(ABTS2-). ABTS radical cation (ABTS+) was produced by reacting ABTS solution (7 mM) with 2.45 mM ammonium persulphate and the mixture were allowed to stand in dark at room temperature for 12-16 h before use.

For the study, different concentrations (100-500 μg/ ml) of the extract (0.5 ml) were added to 0.3 ml of ABTS solution and the final volume was made up to 1 ml. The absorbance was read at 745 nm and the percentage inhibition was calculated.

Nitric oxide was generated from sodium nitroprusside and measured by Griess reaction [12,13]. Sodium nitroprusside (5 mM) in standard phosphate buffer solution was incubated with different concentration (100-500 μg/ml) of the extract dissolved in phosphate buffer (0.025 M, pH 7.4) and the tubes were incubated at 25º for 5 h. Control experiments without the test compounds, but with equivalent amounts of buffer were conducted in an identical manner. After 5 h, 0.5 ml of incubation mixture was removed and diluted with 0.5 ml of Griess reagent (1% sulphanilamide, 2% O-phosphoric acid and 0.1% napthylethylenediamine dihydrochloride). Absorbance of the chromophore formed during diazotization of nitrite with sulphanilamide and its subsequent coupling with napthylethylene diamine was read at 546 nm.

The scavenging activity towards the superoxide radical (O2 .-) was measured in terms of inhibition of generation of O2 . [14]. The reaction mixture consisted of phosphate buffer (50 mM, pH 7.6), riboflavin (20 μg/ml), EDTA (12 mM), NBT (0.1 mg/3ml) and sodium cyanide (3 μg/0.2 ml). Test compounds of various concentrations of the extract 100-500 μg/ml were added to make a total volume of 3 ml. The absorbance was read at 530 nm before and after illumination under UV lamp for 15 min against a control instead of sample. The percentage inhibition was calculated by using the same formula as given above.

Hydroxyl radical scavenging activity was measured according to the method of Kunchandy and Rao [15] by studying the competition between deoxyribose and test extract for hydroxyl radical generated by Fenton’s reaction. The reaction mixture contained deoxy ribose (2.8 mM), FeCl3 (0.1 mM), EDTA (0.1 mM), H2O2 (1 mM), ascorbate (0.1 mM), KH2PO4 KOH buffer (20 mM, pH 7.4) and various concentrations of the sample extracts in a final volume of 1.0 ml. The reaction mixture was incubated for 1 h at 37°. Deoxyribose degradation was measured as thiobarbituric acid reacting substances (TBARS) and the percentage inhibition was calculated.

Freshly excised goat liver was processed to get 10% homogenate in cold phosphate buffered saline, pH 7.4 using glass Teflon homogenizer and filtered to get a clear homogenate. The degree of lipid peroxidation was assayed by estimating the TBARS by using the standard method [16] with minor modifications. Different concentrations of the extracts (100-500 μg/ml) in water were added to the liver homogenate. Lipid peroxidation was initiated by adding 100 μl of 15 mM ferrous sulphate solution to 3 ml of the tissue homogenate. After 30 min, 100 μl of this reaction mixture was taken in a tube containing 1.5 ml of 10% TCA. After 10 min, tubes were centrifuged and supernatant was separated and mixed with 1.5 ml of 0.67% TBA in 50% acetic acid. The mixture was heated for 30 min in a boiling water bath. The intensity of the pink coloured complex was measured at 535 nm. The results were expressed as percentage inhibition using the formula as given above.

The method described by Prieto et al. [17] was used to determine the total antioxidant capacity of the extract. The tubes containing 0.2 ml of the extract (100-500 μg/ml), 1.8 ml of distilled water and 2 ml of phosphomolybdenum reagent solution (0.6 M sulphuric acid, 28 mM sodium phosphate and 4 mM ammonium molybdate) were incubated at 95° for 90 min. After the mixture had cooled to room temperature, the absorbance of each solution was measured at 695 nm using an UV/Vis spectrophotometer (Beckman DU-530). The antioxidant capacity was expressed as ascorbic acid equivalent (AAE).

Total phenolics were quantified and expressed as gallic acid equivalents according to a method proposed by Singleton et al. [18]. About 3.9 ml of distilled water and 0.5 ml of Folin-Ciocalteau reagent were added to 0.1 ml of the extract in a tube and incubated at room temperature for 3 min, 2 ml of 20% sodium carbonate was added to this and kept at boiling water bath for 1 min. The blue colour formed was read at 650 nm.

TFC was estimated colorimetrically based on the method modified by Zhishen et al. [19]. To 0.1 ml of the extract in a 10 ml volumetric flask, distilled water was added to make the volume to 5 ml and 0.3 ml of 5% NaNO2 was added to this. About 3 ml of 10% AlCl3 was added 5 min later and after 6 min, 2 ml of 1 M NaOH was added to it. The absorbance was measured at 510 nm and quercetin (50-250 μg/ml) was used as a standard for constructing a calibration curve. Linear regression analysis was used to calculate IC50 values.

Several concentrations ranging from 100-500 μg/ml of the fruit extract of A. nilagirica were tested for their antioxidant activity in different in vitro models. It was observed that free radicals were scavenged by the test compounds in a concentration dependent manner in all the models. The percentage inhibition of ethanol and aqueous extracts in DPPH, ABTS, superoxide radical, nitric oxide, hydroxyl radical, lipid peroxidation is shown in Table 1 and 2. The reducing power of the extracts were observed to be dose dependent as shown in fig. 1 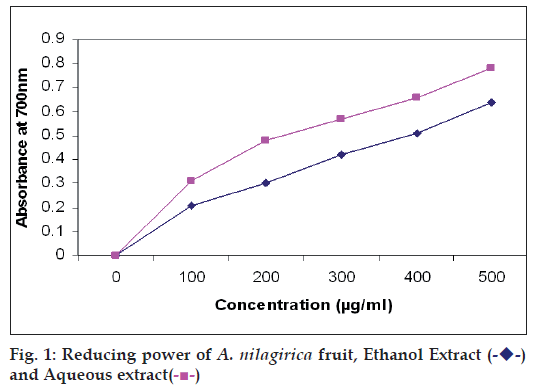 *Values are mean of 3 replicates

Table 1: Effect of Ethanolic Extract of A. Nilagirica Fruit on Different Antioxidant Models

*Values are mean of 3 replicates

Table 2: Effect of Aqueous Extract of A. Nilagirica Fruit on Different Antioxidant Models 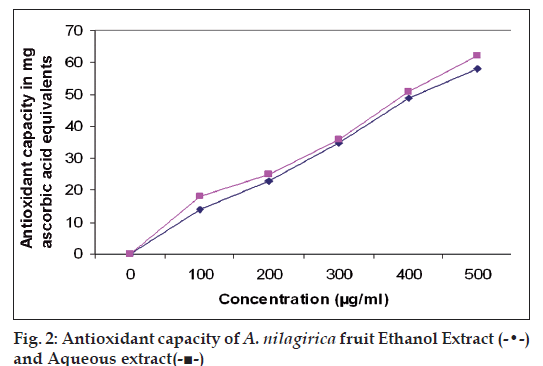 Free radicals are chemical entities that can exist separately with one or more unpaired electrons. The generation of free radicals can bring about thousands of reactions and thus cause extensive tissue damage.

Lipids, proteins and DNA are all susceptible to attack by free radicals [20]. DPPH radical was widely used as a model to investigate the scavenging potential of several natural compounds such as phenolic and anthocyanins or crude mixtures such as ethanol extract of plants. DPPH is a relatively stable free radical and the assay determines the ability of fruit extract of A. nilagirica to reduce DPPH radical to the corresponding hydrazine by converting the unpaired electrons to paired ones, which in fact is the action of the antioxidants. Dose-dependent inhibition of DPPH radical (fig.1) exhibited by the fruit extract of A. nilagirica might be reflective of a stoichiometric reduction of DPPH radical [14,21].

ABTS assay is a decolorizing assay, which involves the direct generation of ABTS radical into monocation, which has a long wavelength absorption spectrum without involvement of any intermediary radical. The antioxidant activity of the extract by this assay implies that the action may be either inhibiting or scavenging radicals since both inhibition and scavenging properties of antioxidant towards this radical have been reported in earlier studies [22].

Nitric oxide is an important chemical mediator generated by endothelial cells, macrophages, neurons etc and is involved in the regulation of various physiological processes [23]. Excess concentration of NO is associated with several diseases [24,25]. Oxygen reacts with the excess nitric oxide to generate nitrite and peroxynitrite anions, which acts as free radicals [20,26]. In the present study the fruit extract competes with oxygen to react with nitric oxide and thus inhibits the generation of the anions.

Superoxides are produced from molecular oxygen due to oxidative enzymes of body as well via non enzymatic reaction such as autooxidation by catecholamines [31]. The scavenging activity towards the superoxide radical (O2.-) is measured in terms of inhibition of generation of O2.-. In the present study, superoxide radical reduces NBT to a blue colored Formosan that is measured at 560 nm [32]. The result showed that the fruit extract of A. nilagirica has a potent scavenging activity with increasing percentage inhibition. The probable mechanism of scavenging the superoxide anions may be due to inhibitory effect of the extract towards generation of superoxides in the in vitro reaction mixture.

The peroxidation of membrane lipids initiated by oxygen radicals may lead to cell injury. Initiation of lipid peroxidation by ferrous sulphate takes place through ferryl-perferryl complex [27] or through .OH radical by Fenton’s reactions [28], thereby initiating a cascade of oxidative reactions. The results obtained in the present study may be attributed to the inhibition of ferryl-perferryl complex formation or scavenging of .OH or superoxide radical or by changing the ratio of Fe3+/Fe2+ or reducing the rate of conversions of ferrous to ferric or by chelation of the iron itself [29]. Fe3+-Fe2+ transformation was investigated in the presence of samples for the measurements of the reductive ability. The reducing capacity of a compound may serve as a significant indicator of its potential antioxidant activity [30].

Phosphomolybdenum assay used to determine the total antioxidant capacity was based on the reduction of MO (VI) to MO (V) by the extract and subsequent formation of a green phosphate/MO (V) complex at acidic pH [17]. Recent studies have shown that many flavonoids and related polyphenols contribute significantly to the antioxidant activity of many plants [33].

The author expresses her sincere gratitude to the management of Karpagam University, Coimbatore.