The present study was designed to evaluate the in vitro cytotoxic effect of methanol extract of aerial parts including stems, leaves and twigs of Aralia cachemirica and purified continentalic acid isolated from this extract against a panel of human cancer cell lines of varied tissues. Percentage of growth inhibition was evaluated by sulphorhodamine B assay. Purified continentalic acid showed moderate cytotoxicity against all the cell lines used. In contrast, the extract exhibited significant concentration dependant cytotoxicity against A-549 (lung), THP-1 (leukemia) and MCF-7 (breast) cell lines. This work highlights cytotoxic potential of this extract, which can further be explored for different constituents for their possible use autonomously or in combined manner in cancer therapy. The detailed analysis of their cytotoxicity has been presented in this paper.

Several species of Aralia (Family Araliaceae) are known for their pharmacological significance [1-7] and have been widely used in traditional medicine for the treatment of rheumatic arthritis, lumbago, lameness [8-10], inflammation [11], gastritis [12], nephritis and diabetes mellitus [13]. Aralia cachemirica is mostly found in India in North Western Himalayas, especially Himachal Pradesh, Uttarakhand and Kashmir [14]. Pharmacological prospective of this plant species has rarely been explored and previous phytochemical and biological studies reported on this species comprise hypoglycemic activity of the roots of Aralia cachemirica [15], isolation of different phytoconstituents including n-tetracont- 19-enoic acid, hexamethyl perhydrophenanthrenyl- 3-ß-n-decanoate, tetrahydrocontinentalic acid, 1ß, 4a, 4ß-trimethyl-6-(10, 14, 18-trimethyl-tridec- 6-enyl)-cyclohexane-4ß-ol, continentalic acid, maltose and sucrose [16], isolation of aralosides and acids [17] and isolation of essential oil from roots of A. cachemirica [18,19]. Isolation of continentalic acid from Aralia cachemirica and evaluation of its immunomodulatory activity has already been reported by our research group [20]. Continentalic acid has been reported for its analgesic activity [21], growth inhibition and apoptosis induction [22], antibacterial activity [23] and antiinflammatory activity [24-26]. Earlier, continentalic acid has been reported to show moderate cytotoxicity against L1210, K562 and LLC tumor cell lines using MTT assay [26]. So far, the cytotoxicity of Aralia cachemirica has not been reported. Herein, we report the evaluation of in vitro cytotoxic effect of crude methanol extract from aerial parts of Aralia cachemirica and purified continentalic acid (CA, fig. 1) isolated from this extract against a panel of five human cancer cell lines by sulphorhodamine B assay to explore their possible role in cancer therapy. 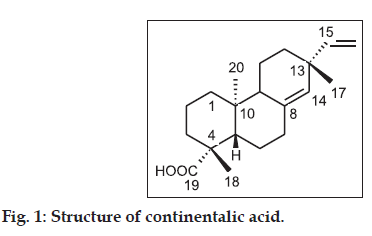 The aerial parts of plant Aralia cachemirica were collected from khillanmarg area of Kashmir (Jammu and Kashmir), India after proper identification and authentication of plant by department of Bioscience and Biotechnology, Banasthali University, Rajasthan, India. (Sample no. BV 168). Reference specimen has been preserved in our laboratory. These plant parts were dried in shade and pulverized separately in a mechanical grinder, passed through a 40 mesh sieve, and stored in a closed vessel. This crushed material (680 gms) was extracted with pure methanol through percolator for 72 h. The suspension was filtered and the filtrate was concentrated under reduced pressure to yield 87.95 gm of methanol free semisolid mass. Column chromatography of this extract using n-hexane:ethyl acetate gradient as eluting solution yielded pure continentalic acid as reported earlier [20].

The human cancer cell lines used in present study were procured from National Cancer Institute, Frederick, U.S.A. Cells were grown in tissue culture flasks in complete growth medium (RPMI-1640 medium with 2 mM glutamine, 100 µg/ml streptomycin, pH 7.2, sterilized by filtration and supplemented with 10% fetal calf serum and 100 units/ml penicillin before use) at 37º in an atmosphere of 5% CO2 and 90% relative humidity in a carbon dioxide incubator. These cells at sub confluent stage, when the cells were 60-70% confluent, were harvested from the flask by treatment with trypsin (0.5% in PBS containing 0.02% EDTA). Cells with viability of more than 98%, as determined by trypan blue exclusion, were used for the present study. The cell suspension of the required cell density (1×105 cells/ml) was prepared in complete growth medium containing gentamicin (50 µg/ml) for determination of cytotoxicity. Stock solutions of 4×10-2 M of continentalic acid and 1000 µg/ml of extract were prepared in DMSO. DMSO was used in such a way that final concentration in the dilution was less than 1%. However the control cells, which were not given any treatment, were having equivalent amounts of DMSO, to nullify the effect. The stock solutions were serially diluted with complete growth medium containing 50 µg/ml of gentamicin to obtain working test solutions of required concentrations and were stored at -20° until use.

In vitro cytotoxicity of test materials was evaluated against the selected human cancer cell lines according to the standard procedure using the protein-binding dye sulforhodamine B to estimate cell growth [27]. The 100 µl of cell suspension was added to each well of the 96-well tissue culture plate. The cells were incubated for 24 h at 37o in an atmosphere of 5% CO2 and 90% relative humidity in a carbon dioxide incubator to allow cell attachment. Test materials of varying concentrations in complete growth medium (100 µl) were added after 24 h incubation to the wells containing cells. The plates were further incubated for 48 h in a carbon dioxide incubator after addition of test material and then the cell growth was stopped by gently layering chilled trichloroacetic acid (50 µl, 50%) on top of the medium in all the wells. The plates were incubated at 4o for one hour to fix the cells attached to the bottom of the wells. The liquid of all the wells was gently decanted and discarded. The plates were washed five times with distilled water and air-dried. Cell growth was measured by staining with sulforhodamine B dye (0.4% w/v in 1% acetic acid) [28]. The adsorbed dye was dissolved in Tris-Buffer (100 ml, 0.01M, pH 10.4) and plates were gently stirred for 5 min on a mechanical stirrer. The optical density (OD) was recorded on ELISA reader at 540 nm. All the assays were done in quadruplets, i.e. four replicates were evaluated.

*As the values denote the mean growth inhibitions of four readings, standard deviation of the values was not feasible. The methanol extract of Aralia cachemirica exhibited concentration dependant activity against the cell lines used for present study, CA: continentalic acid

As shown by the percentage growth inhibition values (Table 1), continentalic acid showed just moderate activity against all cell lines used in the present study, while the extract exhibited significant concentration dependant cytotoxic effect against some specific cell lines, which was comparable to that of the standard cytotoxic agents used for the present study. The concentration of continentalic acid tested against the human cancer cell lines was not increased, because as per the standard protocol, it is always advisable to test any sample in concentrations less than 1x10-4 M, hence we did not test CA at higher concentrations. The effect exhibited by the extract may be ascribed to some single constituent or to several constituents, or to the combined activity of a number of constituents of the extract. These results indicate that this extract contains other active molecules apart from continentalic acid, which need to be investigated. Hence, this extract has the prospective for further investigation to explore its <em>Aralia cachemirica</em> antitumor activity and to identify its active constituents.