In vitro Dissolution Studies on Solid Dispersions of Mefenamic Acid

Mefenamic acid (MA), an anthranilic acid derivative, is a non-steroidal antiinflammatory drig (NSAID) [1] and short (2 h) plasma half-life drug. It is used as antipyretic analgesic [2], and antirheumatic [3] for the treatment of headache, dental pain, postoperative and postpartum pain, dysmenorrhea and osteoarthritis. The usual dose orally is 500 mg three times daily. Mefenamic acid is absorbed from the gastrointestinal tract. Peak plasma concentrations occur about 2 to 4 h after ingestion. Most of the NSAIDs belong to class II category under biopharmaceutical classification system, since they are inherently highly permeable through biological membranes, but exhibit low aqueous solubility. Rate of absorption and/or extent of bioavailability for such hydrophobic drugs are controlled by rate of dissolution in gastrointestinal fluids [4]. Solid dispersions are one of the most promising strategies to improve the oral bioavailability of poorly water-soluble drugs. By reducing drug particle size to the absolute minimum, and hence improving drug wettability, bioavailability may be significantly improved [5]. The present study aims at enhancing the dissolution rate and bioavailability of MA with solid dispersions [6] by employing common solvent and solvent evaporation methods. Water dispersible super disintegrants, a new class of tablet excipients were evaluated as carriers, alone and in combination with polyvinyl pyrrolidine (PVP), for enhancing the dissolution rate and bioavailability of MA.

Solid Dispersions of mefenamic Acid were prepared by common solvent method employing methanol as solvent. The required quantities of MA and PVP were weighed and dissolved in the corresponding solvent in a round bottom flask to get a clear solution. The solvent was then removed by evaporation under reduced pressure (vacuum) at 60° with constant mixing. The mass obtained was crushed, pulverized and shifted through mesh no. 100. In each case solid dispersions were prepared in the ratio of drug carrier namely 8:2.

Solid dispersions of MA in superdisintegrate primojel were prepared by solvent evaporation method. The required quantities of MA were dissolved in methanol to get a clear solution in a dry mortar. The superdisintegrate primojel (PJ, passed through 120 No. mesh) was then added to clear drug solution and dispersed. The solvent was removed by continuous titration until a dry mass was obtained. The mass obtained was further dried at 50° for 4 h in an oven. The product was crushed, pulverized and shifted through mesh no. 100. In each case solid dispersions in the superdisintegrate primojel were prepared at three different ratios of MA, PJ namely 1:1, 1:2 and 1:4, respectively.

The required quantities of MA and water-soluble carrier (PVP) were dissolved in the solvent to get a clear solution in a dry mortar. The superdisintegrate (PJ) was then added to the drug solution and dispersed. The solvent was then evaporated by continuous titration until a dry mass was obtained. The mass obtained was further dried at 50° for 4 h in an oven. The product was crushed, pulverized and shifted through mesh no. 100. Various solid dispersions prepared with their composition are listed in Table 1.

A spectrophotmetric method based on the measurement of absorbance at 279 nm in phosphate buffer pH 7.4 was used in the present study for the estimation of mefenamic acid. The method was validated for reproducibility, accuracy, precision and linearity by analyzing six individually weighed samples of MA. The stock solution of MA was subsequently diluted to a series of dilution containing 5, 10, 15 and 20 μg/ml of solution, using phosphate buffer of pH 7.4. The absorbance of these solutions was measured in UV/Vis spectrophotometer (ELICO SL-159). The method obeyed Beer’s law in the concentration of 0-20 μg/ml.

Dissolution rate of MA was studied using an USP XXIII six station dissolution rate test apparatus (Electro Lab). Paddle stirrer at a speed of 50 rpm and temperature of 37±1° were used in each test. Drug or solid dispersion of drug equivalent to 100 mg of MA was used in each dissolution rate test. Samples of dissolution medium i.e., phosphate buffer pH 7.4 (5 ml) were withdrawn through a filter (0.45 μ) at different time intervals, suitably diluted, and assayed for MA. The dissolution experiments were conducted in triplicate. The results are given in Table 3 and fig. 1. Dissolution rates of MA and its solid dispersions followed first order kinetics (Table 4 and fig. 2). Dissolution parameters such as T50, DE30, K1, Percent of MA dissolved in 10 minutes are given in Table 5.

Table 5: Dissolution parameters of mefenamic acid and its solid dispersions in superdis integrants 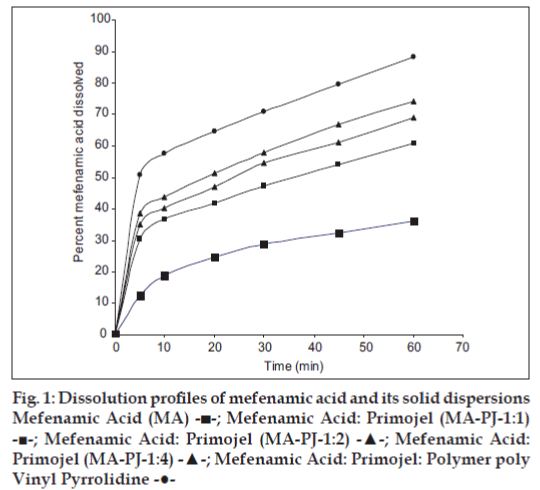 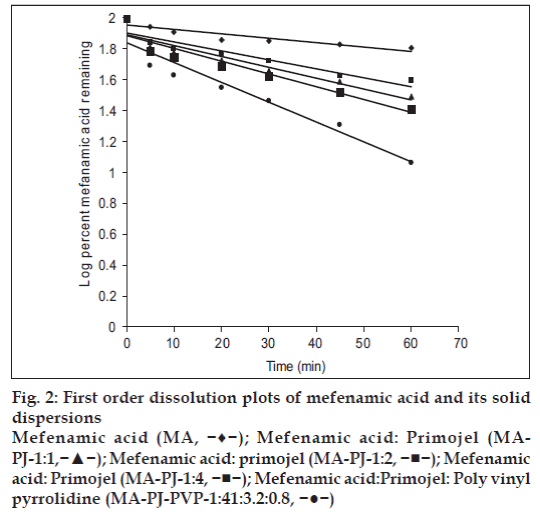 and the index DE30 would relate to the dissolution of drug from a particular formulation after 30 min and could be compared with DE30 of other formulations. Summation of the large dissolution data into a single figure DE enables ready comparison to be made between a large numbers of formulations.