Matrix tablets of phenylpropanolamine were fabricated using karaya gum and guar gum, alone or in combination with other excipients. The tablets were evaluated for physical characteristics like hardness, weight variation, friability, swelling index and drug content. In vitro release of drug was performed in 0.1N HCl (pH 1.2) for 2 h and the rest of dissolution in phosphate buffer (pH 6.8). The effect of water-soluble (lactose) and water-insoluble (dicalcium phosphate) excipients on drug release was evaluated. All the physical characteristics of the fabricated tablets were within acceptable limits. The tablets with karaya gum exhibited greater swelling indices than those with guar gum. All the batches provided drug release over a period of 6 h. The level of matrix former in the tablets affects drug release. Incorporation of lactose or dicalcium phosphate influenced drug release, but at lower polymer levels only. A combination of karaya gum and guar gum exhibited more sustained release than individual gum.

There has been a progressive and divergent study on the use of naturally occurring biocompatible polymeric materials in designing of dosage forms for oral controlled release administration [1-3]. Gums of natural sources are biodegradable and non-toxic, which hydrate and swell on contact with aqueous media; and these have been used for the preparation of single unit dosage forms [4]. Karaya gum (KG), dry exudate of plant species Sterculia [5], has high swelling property and is an important hydrogel in formulations for constant release of drug in vitro [2,6]. Guar gum (GG), a polysaccharide derivative with glycoside linkages, has been used as matrix former for controlled release of isoniazide [7], diltiazem [8] and nafronyl oxalate [9]. Phenylpropanolamine hydrochloride (PPA HCl), a sympathomimetic amine, is widely used as a nasal decongestant; it acts as an appetite suppressant at higher dose. It has α-adrenergic agonist effect [10], which produces vasoconstriction, redistributes local blood flow to reduce oedema of the nasal mucosa, thus improving ventilation, drainage and nasal stuffiness. Oral nasal decongestants like PPA HCl are used to overcome the local tissue damage caused by topical nasal decongestants. The present investigation is aimed to formulate matrix tablets with KG and GG alone or in combinations as matrix formers and to study the effect of lactose (water-soluble) and dicalcium phosphate (water-insoluble) on drug release.

Drug (PPA. HCl) was generously gifted by Alkem Pharma (Mumbai). Karaya gum (KG) and guar gum (GG) were purchased from National Chemicals (Vadodara) and HiMedia Laboratories (Mumbai) respectively. Lactose and dicalcium phosphate were procured from CDH, New Delhi. All other reagents were of analytical grade and used as received.

Drug (# 80) was mixed with polymer (KG or GG alone or in combination) and other excipients (Table 1, Batch size 50 tablets) in a turbula mixer for 30 min. The powder mixture was moistened by adding water drop-wise, kneaded in a mortar and sifted through sieve no. 12. The granules obtained were dried at 40° in an oven (Jindal Scientific Industries, Delhi) till constant moisture was achieved, sifted through sieve no. 20, mixed with magnesium stearate and talc before compression on a Manesty E2 single-punch tabletting machine with flat-faced punches (9 mm diameter).

Table 1: Formulation Composition, Time for 50% and 90% Release from Matrix Tablets

The matrix tablets were evaluated for hardness (Monsanto hardness tester), friability (Roche friabilator) and weight uniformity, as per the standard procedures. Drug content in tablets was determined by pulverizing 10 tablets, and powder quantity equivalent to average weight of tablets was dissolved in 100 ml 0.1 N HCl (pH 1.2). An aliquot was removed, filtered and after suitable dilution analysed on a double beam UV-spectrophotometer (Jasco 7800, Japan) at 257 nm. The water uptake behaviour of tablets was determined gravimetrically in 0.1N HCl (pH 1.2) at room temperature. A pre-weighed tablet with a tablet holder was placed in the medium, and the weight of the swollen tablet was noted at predefined time intervals. The swelling index was calculated by the following equation: swelling index = (Wt - W0)/W0, where W0 and Wt are the initial weight of tablet and weight at time t respectively. Dissolution tests were performed in USP XXIII dissolution test apparatus, type II, with a paddle speed of 50 rpm at 37 ± 0.2°. For the first 2 h, dissolution was performed in 900 ml of 0.1N HCl (pH 1.2), and then in phosphate buffer (pH 6.8) for the rest of the dissolution duration. At regular time intervals, an aliquot of 5 ml was withdrawn and assayed for drug content at 257 nm. All evaluations were performed in triplicate.

The hardness of the matrix tablets ranged between 3.9 ± 0.13 and 5.7 ± 0.27 kg/cm2. The percent friability of the prepared tablets was well within acceptable limit. There was no significant weight variation observed between average weight and individual weight of tablets. The percentage drug content in all the batches was within the range of 97.9-102%, ensuring uniformity of drug content in the formulations. The swelling index of tablets was widely dependent on the nature of polymer (fig. 1). Higher degree of water uptake was observed with GG matrices than KG matrices. The swelling kinetics was dependent on the concentration of gum, as lower proportion of gum would decrease the ability of the matrix to absorb water. Unlike tablets with GG as matrix, tablets with KG as matrix showed weight loss after an initial swelling The weight difference with time was a measure of both hydration and erosion process as occurring simultaneously. During the second half of dissolution study, the erosion exceeded the rate of hydration with a decrease in wet weight of the matrix [11]. The drug release was dependent on the nature and concentration of gum in the matrix. The effect of the matrix former and excipients on drug release rate can be analyzed from time for 50% (t50%) and 90% (t90%) release (Table 1). Although there was no significant variation in t50% and t90% values for tablets at lower gum concentration, at higher gum concentration the same was not true. All the batches provided a burst release of PPA HCl. Further, the release was influenced by the nature of gum. As reported elsewhere [12], KG at higher level provided more controlled release than at lower level. The initial burst release in tablets with KG was in contrast to an earlier report [13], where a lag time was observed before any measurable amount of drug release was detected, which was due to moderate swelling of KG. However, the initial burst release observed in our study could be attributed to the solubility of the amine drug in acidic environment of dissolution medium. Tablets with combination of KG and GG as matrix former (KG1, KG2 and KG3) sustained drug release longer than tablets with individual polymers (fig. 2). 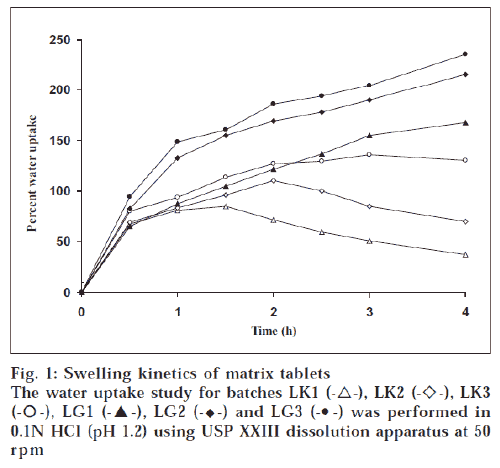 Figure 2: In vitro drug release profile of fabricated matrix tablets Effect of lactose, DCP and combination of polymers on the

The drug release was greatly influenced by the nature of thediluent incorporated in the formulations. Higher drug release was observed from batches LG1 and LK1 (20% w/w polymer level and lactose) than batches DK1 and DG1, containing dicalcium phosphate as diluent. This difference in release rate can be attributed to lactose, which diffuses outward through thehydrated gel layer, increasing the porosity and decreasing thetortuosity of the diffusional path of drug [14,15]; while dicalciumphosphate, a water-insoluble material, decreases drug release [16], owing to formation of a porous non-swellable and insolublematrix [17]. However, at higher polymer concentration (40% w/w), no significant influence of diluent was observed on drugrelease. Drug release followed square root of time equation as the correlation co-efficient (r2) values were higher for Q vs. t1/2 than Q vs. t plots. Further, ‘n’ values ranged between 0.31 and 0.50, indicating that the drug release was predominantly by diffusion mechanism.