The aim of present study was to investigate the antimicrobial activity of Cenchrus ciliaris and Cenchrus setigerus extracts in order to use it as a possible source for new antimicrobial substances against important human pathogens. Crude extracts of the stem of Cenchrus ciliaris and Cenchrus setigerus were evaluated against some medically important pathogens viz. Escherichia coli, Raoultella planticola, Staphylococcus aureus, Pseudomonas aeruginosa, Bacillus subtilis, Enterobacter aerogenes, Candida albicans and Aspergillus flavus. The dried and powdered stems were successively extracted with hexane, toluene, isopropyl alcohol, acetone and ethanol using soxhlet assembly. The antimicrobial activity assay was done by both disc diffusion and serial dilution methods. Isopropyl alcohol extract of Cenchrus setigerus showed highest activity against Escherichia coli. The test pathogens were more sensitive to the isopropyl alcohol, acetone and ethanol extracts than to the hexane and toluene extracts except against Bacillus subtilis. Result reveals that the most bioactive compound was cycloleucolenol-9,19-cycloergost-24 (28)-en-3-ol, 4, 14-dimethyl acetate in both the species of Cenchrus grass, (19.15%) in isopropanol extract of Cenchrus setigerus whereas, (14.03%) in acetone extract of Cenchrus ciliaris.

The use of antibiotics has revolutionized the treatment of various bacterial infections [1]. However, in recent times, there have been increases in antibiotic‑resistant strains of clinically important pathogens [2]. The nonavailability and high cost of new‑generation antibiotics with a limited effective span has resulted in increase in morbidity and mortality, Therefore, there is a need to look for substances from other sources with proven antimicrobial activity [3]. A number of plants have been documented for their biological [4] and antimicrobial properties [5].

Dhaman (Cenchrus ciliaris) and Kala‑dhaman (Cenchrus setigerus) are known as C4 grasses. These grasses are more competitive under the conditions of high temperature, solar radiation and low moisture. and are more efficient at gathering CO2 and utilizing nitrogen from the atmosphere and recycled N in the soil. These grasses have an excellent soil‑binding capacity which helps to conserve soil in the desert areas [6]. The objective of present study was to evaluate the in vitro antimicrobial properties of crude extracts of Cenchrus grass in different polar solvents with gentamycin and ketoconazole against six (two Gram‑positive and four Gram‑negative) different species of bacteria and two fungi.

Stem extracts of C. ciliaris and C. setigerus prepared with a series of nonpolar to polar solvents by hot extraction method [7] in soxhlet assembly were first screened for antimicrobial activity by disc diffusion method [8] against a few medically important bacteria and fungi. The fraction showing best activity was then used for the assay of minimum inhibitory concentration (MIC) by tube dilution method [9].

Stems of C. ciliaris (RUBL‑14118) and C. setigerus (RUBL‑5299) were collected in the month of August 2009 from the Central Arid Zone Research Institute, Jodhpur, Rajasthan. Plant samples were identified and deposited in the herbarium, Department of Botany, University of Rajasthan, Jaipur. The collected plant materials were cleaned with water and selected plant parts were separately shade‑dried for 1 week. Shade‑dried parts were powdered with the help of a grinder. Fine powder of each sample was stored in clean container to be used for Soxhlet extraction following the method of Subramanian and Nagarjan [10] in different polar solvents selected. Stems were sequentially extracted with different solvents according to their increasing polarity using Soxhlet apparatus for 18 h at a temperature not exceeding the boiling point of the respective solvent. The obtained extracts were filtered using Whatman No. 1 filter paper and then concentrated at 40° using an evaporator.

The organisms used in this study were four Gram‑negative bacteria and two Gram‑positive bacteria namely, Escherichia coli (MTCC‑46), Staphylococcus aureus (MTCC‑3160), Raoultella planticola (MTCC‑530), Pseudomonas aeruginosa (MTCC‑1934), Bacillus subtilis (MTCC‑121), Enterobacter aerogenes (MTCC‑111), Candida albicans (MTCC‑183) and Aspergillus flavus (MTCC‑277). Selected pathogenic microorganisms were procured from Microbial Type Culture Collection, IMTECH, Chandigarh, India. Bacterial strains were grown and maintained on nutrient agar (NA) medium, whereas fungi were maintained on Sabouraud dextrose agar (SDA) medium. Disc diffusion assay (DDA) was performed for screening by standard method [11]. NA and SDA base plates were seeded with the bacterial and fungal inoculum, respectively (inoculum size 1×108 CFU/ml for bacteria and 1×107 cell/ml for fungi). Sterile filter‑paper discs (Whatman No. 1, 5 mm in diameter) were impregnated with 100 μl of each of the extracts to give a final concentration of 1 mg/disc (dissolve the extracts in dimethyl sulfoxide (DMSO) solvent) and left to dry in vaccuo so as to remove the residual solvent, which might interfere with the determination. Petri plates were preseeded with 15 ml of growth agar medium and 1.0 ml of inoculum. Extract discs were then placed on the seeded agar plates. Each extract was tested in triplicate with gentamycin (10 μg/ disc) and ketoconazole (10 0 μg/disc) as standard for bacteria and fungi, respectively. Activity index (AI) for each extract was calculated.

MIC was determined as the least extract concentration which inhibited the growth of the test organisms [12]. Bacterial and fungal suspensions were used as negative controls, whereas broth containing standard drug was used as the positive control. Equal volumes of the various concentrations of each extract and nutrient broth were mixed in micro‑tubes to make up 0.5 ml of solution. 0.5 ml of McFarland standard of the organism suspension was added to each tube. The tubes were incubated aerobically and Minimum bactericidal concentration (MBC) was determined by subculturing and further incubated for 24 h. The highest dilution that yielded no single bacterial/ fungal colony was taken as the MBC/Minimum fungicidal concentration (MFC) (minimum microcidal concentration[MMC]). Total activity (TA) is the volume at which the test extract can be diluted with the ability to kill microbes.

Minimum inhibitory concentration (MIC) and MMC values (Table 2) were evaluated for those plant extracts, which were showing activity in diffusion assay. In the present investigation, lowest MIC value 0.938 mg/ml was recorded by isopropanolic extracts of C. setigerus and 1.875 mg/ml by toluene, isopropanol and acetone extracts of C. ciliaris against S. aureus indicating significant antimicrobial potential.

The preliminary phytochemical profiling for the stem extracts of both the species of Cenchrus was carried out, wherein the consistency was found to be sticky in the isopropyl extracts of C. setigerus whereas the other polar solvent extracts were found to be nonsticky. The yield mg/10 g±SD (w/w) of the extracts was also analysed wherein the highest yield was found in acetone extract of C. ciliaris, i.e. 648±9.51 and 348±9.22 in ethanol extract of C. setigerus (fig. 1). Amount of extract isolated from plant parts and TA was calculated (Table 3). Maximum TA values calculated were 40 ml against S. aureus, 10 ml against P. aeruginosa, B. subtilis bacteria and 16.40 ml against C. albicans, respectively. 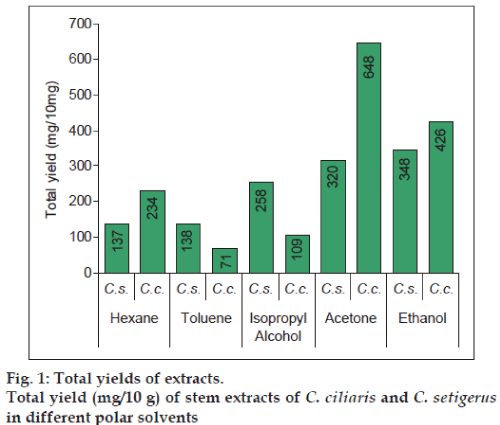 Interpretation on mass spectrum of GC‑MS was done using the database of National Institute of Standard and Technology (NIST) having more than 62,000 patterns. The mass spectrum of the unknown component was compared with the spectrum of the known components stored in the NIST library. The most bioactive compound was cycloleucolenol‑9,19‑cycloergost‑24 (28)‑en‑3‑ol, 4,14‑dimethyl acetate in both the species of Cenchrus grass, (19.15%) in isopropanol extract of C. setigerus whereas, (14.03%) in acetone extract of C. ciliaris. Antimicrobial activities of these grasses may be due to this compound (fig. 2).

Antimicrobial activities (assessed in terms of IZ and AI) were recorded. Results of the present study showed that all the 10 extracts tested inhibited the growth of selected bacteria and fungi, indicating broad‑spectrum bioactive nature of the two selected plants (in C. setigerus and in C. ciliaris). Most susceptible organism in the investigation was B. subtilis against which, most of the plant extracts showed IZ.

Isopropyl alcohol and acetone extracts in both species of Cenchrus express maximum antibacterial and antifungal activities, respectively, by suppressing the growth of all microbes (by low MIC and MMC values) under investigation. MMC values were found to be higher than the MIC values of the extracts against the microorganisms tested; and they indicate the bacteriostatic and fungistatic effects of the extracts. Five extracts of C. setigerus and four extracts of C. ciliaris were found to be bactericidal in nature. Isopropyl alcohol extracts of both the species of Cenchrus were bactericidal against S. aureus and P. aeruginosa. Gram‑negative bacteria P. aeruginosa was the second most susceptible organism after S. aureus, which supported the finding that plant extracts are usually more active against Gram‑positive bacteria than Gram‑negative [12].

Overall, the test pathogens were more sensitive to the isopropyl alcohol, acetone and ethanol extracts than to the hexane and toluene extract. This finding suggests that some of the active compounds in the crude extracts are polar, and thus dissolved readily in the isopropyl alcohol, acetone and ethanol whereas the hexane and toluene extract may have dissolved out nonpolar compounds that possess less antimicrobial activity. Previous studies have noted alcohols to be reliable and consistent solvents for the extraction of antimicrobial substances from plants [13].

The authors express their thanks to UGC for providing the funds for the valuable project under Dr. D. S. Kothari Postdoctoral fellowship scheme.