Metoprolol succinate (MPL), a know cardioselective β-1 adrenergic blocker is widely used to treat cardiovascular diseases like angina pectoris, heart failure, myocardial infarction, hypertension, arrhythmias and others [1-3]. MPL is highly water soluble with a half life of 4-6 h which may lead to adverse effects on overdose like severe weakness, fainting, trouble in breathing and very slow heartbeat [4-5]. This resulted in development of sustained release (SR) formulations of MPL like Toprol-XL tablets composed of controlled release pellets which provides slow release of the drug. However, preparation of pellets is a complicated, tedious and time consuming process.

Lipidic and polymeric materials are widely used to modulate the release of drugs from the pharmaceutical dosage forms to achieve greater safety and efficacy. Matrix tablets prepared using lipidic excipients are widely accepted due to their simplicity and ease of formulation. The release of drugs is modified by using and optimizing different ratios of the lipids and drugs. Compritol®888ATO (COM), a lipid excipient with IIG and GRAS status along with excellent tableting properties provides sustained and controlled release of drugs where in release mechanism is based on diffusion and erosion [6-7]. Considering these advantages, matrix tablets of MPL with melt granulation (MG) method using COM which sustained the release of MPL with good stability and IVIVC [3] have been reported.

Release of drug from the formulations is controlled by the physicochemical parameters of the drug molecule and excipients, which may differ from source to source or batch to batch. These parameters have a direct influence on their functionality which in turn plays a critical role in formulation, processing, in vitro release and in vivo performance [8,9]. Specifications provided for the excipients are wide and confer average values of their properties. Sometimes physical evaluation of these excipients suggests that they are not distinguishable; however they may show variation during processing and in the final formulation [10,11]. Compression force (CF) is also a vital control factor in formulating tablets as a small change in CF could affect the disintegration, dissolution, friability and stability of tablets. Variation in the CF may result in polymorphic changes which in turn may lead to differences in the porosity, release profile and consequently change the bioavailability of the drug [12]. Porosity can be viewed as bulk property of the tablets and increase in the CF leads to decrease in the average pore diameter and total porosity of the tablets [13]. Thus, physicochemical properties of the drug and excipients, formulation factors and process parameters like CF could have a significant influence on the release profile of the drug.

Due to high rate of alcohol consumption worldwide, the risk for drug-alcohol and excipient-alcohol interactions has increased. Some modified release dosage forms can be expected to exhibit more rapid drug dissolution and increase release rate in the presence of ethanol. Therefore, concomitant consumption of alcoholic beverages along with these products might be expected to have the potential to induce dose dumping [14-16]. Hydromorphone, the opiate drug has been withdrawn from the US market due to its potential interaction with alcohol [17]. Robustness of the formulations when ingested along with alcohol is a matter of concern expressed by regulatory authorities. Draft guidance has been issued by USFDA to industry for dissolution of different extended release formulations in presence of various concentrations of alcohol in the range of 5-40% [18]. Due to high solubility of MPL in water and alcohol, rapid release of MPL may occur from SR tablets leading to increased toxicity and side effects. Release of MPL in vitro in presence and absence of ethanol could help to provide evidence about the ruggedness of SRMPL with reference to ingested alcohol. Objective of the present study was to evaluate the influence of formulation factors, hydro-ethanolic dissolution medium and CF on the release profile of SRMPL.

Chromatographic system and conditions for analysis of MPL

MPL was quantified using Shimadzu Corporation (Kyoto, Japan) HPLC system equipped with a PDA detector. Separation was carried out on HIQ sil C18 column (KYA Tech, Japan) with a particle size of 5 μ (250×4.6 mm I.D.) at room temperature (RT). Mobile phase composed of a mixture of ACN and phosphate buffer (pH 3), in a ratio of 30:70 v/v at a flow rate of 1.0 ml/min and detection wavelength of 274 nm.

A simple and inexpensive microscopic analytical technique was used to measure the average particle size and to study particle size distribution of drug particles. The analysis was performed using an optical microscope calibrated with a stage micrometer scale. Drug (MPL) particles suspended in liquid paraffin were allowed to settle in one plane such that the particles were sufficiently dispersed to distinguish individual particles under microscope (45X). Mean particle size was determined by counting 100 particles.

Tablets (S1 and S2) were prepared with MPL (A) of two different batches and COM in ratio of 1:2 using MG method as reported earlier [3]. Table 1 lists the composition of SRMPL tablets used in the study. Briefly, MPL and Avicel PH101 were added to molten COM (melted in an oven at 80-85º) with constant stirring to get a uniform dispersion. The dispersion was cooled gradually to R.T. and then passed through B.S.S 40 mesh sieve. The blend was lubricated with aerosil and magnesium stearate which was subsequently compressed using 8.7 mm punch on single station tableting machine (Unimek, India) to obtain tablets. Tablet formulations with MPL from three different sources (A, P and Y) with variations in the drug particle size (S2, S3 and S4) and tablets with COM from two different batches (S5 and S6) were used to prepare SRMPL.

Five tablets of SRMPL were crushed in a mortar using pestle. Weight equivalent to one tablet was accurately weighed and dissolved using MeOH in a volumetric flask. After suitable filtration and dilution with MeOH, MPL content of the tablet was estimated using HPLC-UV system (Jasco Corporation, Japan) at 274 nm.

In vitro release studies were carried out in absence or presence of ethanol following the protocol reported earlier [3]. Briefly, the release was performed in 500 ml buffer (pH 6.8) using USP type II paddle apparatus (Electrolab, India) at 37±0.5°. Aliquots of 5 ml were withdrawn at predetermined time intervals of 1, 2, 4, 6, 8, 10, 12 and 20 h followed by replacing with same volume of fresh dissolution medium. Subsequently, samples were filtered and analyzed for MPL content using HPLC-UV method at 274 nm and percent cumulative release was calculated. In vitro release in presence of ethanol was studied by adding ethanol to the dissolution medium to obtain three different hydroalcoholic media with ethanol concentrations of 5, 20 and 40%.

Effect of CF on porosity and release profile of SRMPL

The blend obtained by MG method was compressed on Minipress II multitooling 12 stations Rimek machine at two different CF viz <100 and 2000 kg/cm2 to get SRMPL tablets with low hardness (S7) and high hardness (S8), respectively. The porosity of tablets was determined using high pressure mercury porosimeter (Pascal 440) in the pressure ranging from 0.1–400 MPa.

Data was expressed as the mean±S.D. Results were analysed by t test and P<0.05 was considered statistically significant.

Earlier study reported development and evaluation of SRMPL tablets using COM with regards to formulation, optimization and processing abilities during scale-up using rapid mixer granulator (RMG) and IVIVC [3]. SRMPL matrix tablets with MPL:COM ratio of 1:2 was successfully optimized with desired SR profile for 20 h. In the present study, the source of MPL or the batch of COM was varied in separate experiments by keeping the quantity of ingredients constant. It was observed that the particle size of MPL from source ‘Y’ was highest (~27 m) whereas size from the source ‘P’ was lowest (~14 m) with intermediate size particles from source ‘A’ (Table 2). Similarity factor (f2 value) was employed to evaluate the release profiles of tablets based on the comparison between the experimental results and release profiles. f2 value was found to be above 50 when the release profile of S3 and S4 were compared taking S2 as the reference. Thus, it was observed that there was no significant difference in the release profile of SRMPL tablets indicating that the source of API – particularly particle size distribution of sourced API within the range employed in experimentation did not influence MPL release profile (fig. 1). Further, use of COM from two different batches caused no significant change in the release profile of SRMPL (fig. 2). All the tablets were smooth in appearance, uniform in weight with hardness of 2.0-2.5 kg/cm2 and friability of less than 1%. MPL content of all the formulations was found to be in between 93-96% indicating good distribution and homogeneity of the drug (Table 3). 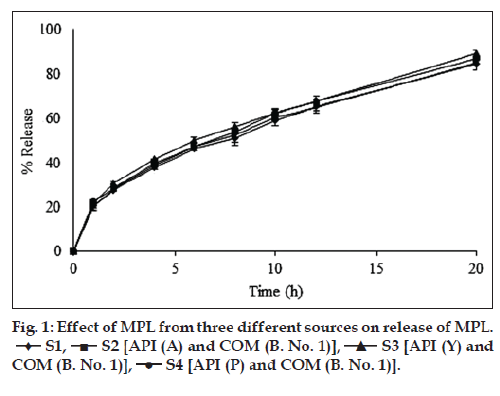 Figure 1: Effect of MPL from three different sources on release of MPL. 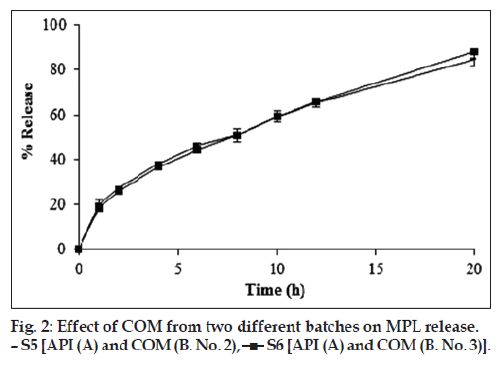 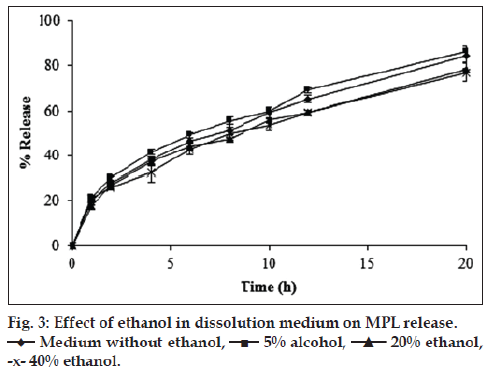 Figure 3: Effect of ethanol in dissolution medium on MPL release.

The hardness of the tablets increased with increase in the CF as the tablet becomes denser and less porous. However, the value of hardness reached a constant level at CF of 2000 kg/cm2 above which chipping and sticking was observed. Compression was smoother and uniform up to CF of 2000 kg/cm2 with good appearance and hardness of 3 kg/cm2. At CF less than 100 kg/cm2, tablets were compressed easily with uniform hardness but with less shine and slight roughness on surface and sides. Based on these observations tablets were compressed at two different CF of less than 100 kg/cm2 and 2000 kg/cm2. The hardness, thickness and porosity parameters of tablets at the two different CF are shown in Table 4. As can be observed, the variation in the thickness of S7 and S8 was nominal. Release profile of tablets compressed at high CF of 2000 kg/ cm2 (S8) was comparable with S1 (fig. 4). However, S7 (CF<100 kg/cm2) showed significant increase (P<0.05) in the release compared to S1 and S8 with ~90% release at the end of 8 h suggesting influence of CF on the release profile of MPL. 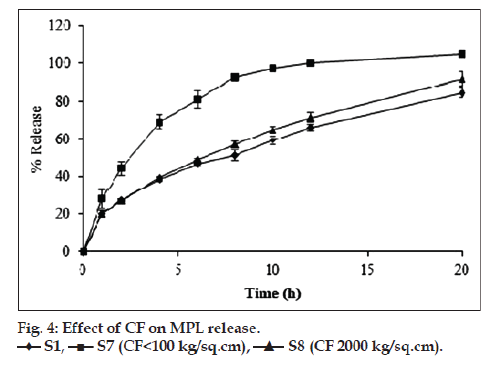 Thus, the study revealed that variation in the source of MPL or the batch of COM and presence of ethanol in the dissolution medium has no significant influence on release profile of SRMPL. CF was found to be the critical factor for predicting the release of MPL from tablets. SRMPL formulated using COM as retarding lipid matrix holds a great prospective in providing consistent and sustained release of MPL.

Authors would like to thank Rubicon Research Pvt. Ltd., Mumbai for compressing the tablets.

The project was funded by Gattefosse India Pvt. Ltd., Mumbai.