Etoposide is a semisynthetic compound, widely used in treatment of non small cell lung cancer. However, frequent dosing and adverse effects remain a major concern in the use of etoposide. Liposomal systems for pulmonary drug delivery have been particularly attractive because of their compatibility with lung surfactant components. In the present investigation, pulmonary liposomal delivery system of etoposide was prepared by film hydration method. Various parameters were optimized with respect to entrapment efficiency as well as particle size of etoposide liposomes. For better shelf life of etoposide liposomes, freeze drying using trehalose as cryoprotectant was carried out. The liposomes were characterized for entrapment efficiency, particle size, surface topography, and in vitro drug release was carried out in simulated lung fluid at 37° at pH 7.4. The respirable or fine particle fraction was determined by using twin stage impinger. The stability study of freeze dried as well as aqueous liposomal systems was carried out at 2-8° and at ambient temperature (28±4°). The freeze dried liposomes showed better fine particle fraction and drug content over the period of six months at ambient as well as at 2-8° storage condition compared to aqueous dispersion of liposomes.

Inhalation aerosols are attractive delivery platforms as compared to conventional systemic therapy, which include its non invasive patient friendly mode of administration, reduction in dose, minimized adverse effects. Pulmonary system provides large surface area for absorption and the relatively low metabolic activity of the lungs make this organ system a potential route for the systemic delivery of drugs not easily delivered by other means [1-7].

Etoposide (ETP) is an antineoplastic agent, which acts by forming a ternary complex with topoisomerase II and DNA, causing DNA breaks and cell death. It is part of the first line therapy for small cell lung carcinoma and drug-resistant testicular cancer. However, strong lipophilicity is a major limitation in the administration of ETP, and vehicles needed as solubilizers have often been associated with adverse effects. Liposomal encapsulation of ETP has been found to be effective when administered by i.v. route in animals and a reduction in haematological toxicity is reported [8,9].

Liposomal delivery systems are advantageous to improve the solubilization of poorly soluble agents, and can act as a sustained release reservoir. It is also useful potentially target specifically to alveolar macrophages to ensure better uptake of drug. It is compatible with lung surfactant components. [3,10,11].

Sustained release formulations of ETP in the lung provides better retention of drug as well as reduces biodistribution of drug throughout the systemic circulation and hence reduced incidence of side effects. Thus, sustained release etoposide formulations can provide prolonged drug release and hence, better anticancer activity [12,13]. The objective of the present work was to develop an effective ETP liposomal aerosol formulation for lung delivery, and thereby achieve improved therapy in lung cancer

Phospholipon 90 G and Phospholipon 90 H were kindly gifted by Natterman GmbH Germany. Etoposide (ETP) was gifted by Dabur Research Foundation Pvt. Ltd. Gaziabad, India; while trehalose was a kind gift from Hyashibara, Japan. Cholesterol was purchased from s.d. fine-chem, Mumbai, India. All the other solvents and chemicals were of analytical grade and were obtained from s.d. fine-chem, Mumbai, India.

Liposomes were prepared by lipid film hydration method [14]. The hydration of the lipid film was carried out with hydroxy propyl β-cyclodextrin (HPβCD) solution at 600. Vesicle size was reduced by subjecting the liposomes to mechanical shaking for upto 6 h on a horizontal shaker bath (Expo, India) followed by intermittent sonication (30 s) carried out after every 2 h, in a bath sonicator (Expo, India) at room temperature. The unentrapped drug was removed by centrifugation (20,000 g, Beckman, U.S.A.). Various parameters such as cholesterol concentration, lipid proportion and shaking time were optimized with respect to particle size and entrapment efficiency. The liposomal dispersion of ETP was freeze dried using trehalose as cryoprotectant (Labconco, England). The freeze dried ETP-liposomes were stored in a refrigerator in sealed vials until use. Thermal behaviour of ETP liposomes before and after freeze drying was studied using DSC (DT40, Shimadzu Japan).

For EE of ETP liposomes, 0.25 ml of liposomal preparation was diluted to 4 ml with distilled water and centrifuged at 20000 g at 8°±0.5° for 30 min using Allegra TM 64 R centrifuge (Beckman, U.S.A.). The supernatant was appropriately diluted in distilled water and the amount of drug present in the supernatant was determined by reverse phase HPLC. Entrapment efficiency was calculated as the difference between the initial amount of drug added and that present in the supernatant as free drug, and was expressed as μg of drug entrapped per mM of total phospholipids (μg/mM of lipid).

In vitro drug release profile of freeze dried ETP liposomes was assessed in simulated lung fluid (pH 7.4) at 370 by static method. After periodic intervals of time, the liposomal aliquots were centrifuged and supernatant was evaluated for the drug content by HPLC.

The respirable fine particle fraction (FPF) of the ETP liposomes was determined using a twin-stage impinger, apparatus A (TSI), official in Indian Pharmacopoeia. The liposomes reconstituted in saline was nebulized using the nebulizer (Omron CX3) attached to the TSI by means of rubber collars. The vacuum pump was operated at 28 l/min. The fractions collected in each stage were analyzed for ETP content by HPLC using the chromatographic conditions as described above. Fine particle fraction (FPF) i.e., respirable fraction is expressed as the ratio of the amount of drug recovered from the lower stage of the impinger to the sum of drug recovered from the capsule shells, the inhaler device and the upper and lower stages of the twin stage impinger.

Stability evaluation of aqueous liposome suspension and freeze dried liposomes was carried out at 2-8º and ambient condition (28±4°) for a period of six months. Samples withdrawn at specified time intervals (1, 3 and 6 month) were visually observed for appearance, ease of reconstitution, and sedimentation. Also the liposomes were evaluated for ETP content, particle size and FPF.

The advantage provided by liposomes as drug carrier is based on their ability to alter favuorably the pharmacokinetic profile of the encapsulated species and thus provide selective and prolonged pharmacological effects at the site of administration.

Entrapment efficiency also depends on the formulation variables i. e., lipid composition used. To study this aspect, several batches of ETP liposomes were prepared with varying lipid compositions. Lipid composition of various batches, their EE and particle size observed are listed in Table 1. Decreased EE, after increasing cholesterol may be attributed to the lipophilic nature of cholesterol and hence possibly competing with ETP in the lipid bilayer and reducing the entrapment of ETP. Glavas-Dodov et al., have reported similar observations for 5-flourouracil [17].

There was decrease in entrapment efficiency with increasing cholesterol as well as PL 90H, and decreasing PL 90G. Slight increase in particle size is evident on freeze drying

Increasing the amount of Phospholipon 90 G increased the EE of ETP. This could be attributed to the fact that unsaturated phospholipids are relatively more flexible in nature, and thereby provide less hindrance for ETP to be retained in lipid bilayer. Increasing the saturated lipid, Phospholipon 90 H resulted in reduced EE; this could be due to the saturated lipid behaving in the same way as cholesterol. Better hydration was achieved by increasing shaking time, leading to increased EE. This could be attributed to better solubilization of ETP in HPβCD and subsequent increased EE. Further investigations were carried out on batch EL 7 as it had shown better drug content as well as particle size.

Liposomal delivery systems are highly susceptible to degradation. Various approaches have been developed and evaluated to impart long term stability to liposomes and one of them is lyophilization [18]. To maintain the same particle size distribution and to avoid leakage of the encapsulated drug from liposomes after the freeze-drying/rehydration cycle, suitable cryoprotectants like disaccharides need to be added, which prevent fusion, aggregation and leakage of encapsulated compounds [17]. In the present study, liposomes were freeze dried using various cryoprotectants. Several disaccharides like lactose, mannitol, maltodextrin, and trehalose were evaluated for their cryoprotective effects at varying ratios. Lipid: trehalose at ratio of 1:10 was found to be most suitable, as less drug leakage and minimal change of particle size was observed after freeze drying.

DSC spectra of various batches are given in fig. 1. DSC spectra of ETP as in fig. 1 showed one sharp endotherm at 288.9º with onset temperature 269.5º and recovery temperature 297.3º. Freeze dried liposomes gave thermal events in the range of 117.5-144.1º, and a big endothermic peak at 279.4º immediately followed by exotherm with peak temperature at 296.5º. This event indicated the interaction of trehalose with phospholipids of liposomes during freeze drying. The drug release was sustained for more than 70 h for all batches but there was significant difference in release rate of the drug between the batches as shown in fig 5. The formulation variables like cholesterol content, and lipid content (90 G and 90 H), played a major role in the drug release. Fig. 5 shows the time required for 80% drug release (T80%) with respect to lipid ratio [lipid (90G:90H):cholesterol]. It clearly showed that increase in the cholesterol content reduced T80%. Thus it can be concluded that, the permeability of the bilayer is strongly influenced by its constituents. It can be seen that high amount of cholesterol significantly reduced the T80%.The FPF of both liposomal dispersions as well as freeze dried liposomes ranged around 50%, revealing good respirable properties. 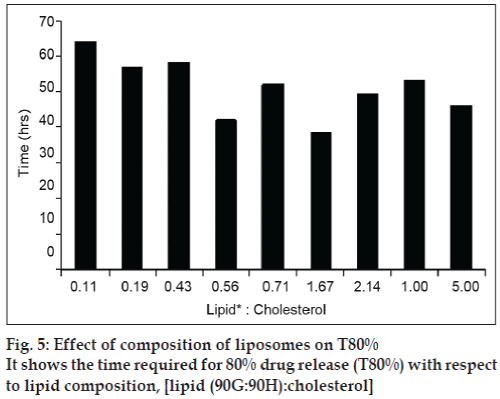 Fig. 5: Effect of composition of liposomes on T80%
It shows the time required for 80% drug release (T80%) with respect to lipid composition, [lipid (90G:90H):cholesterol]

Sedimentation of lipid phase was observed in aqueous liposomes which upon gentle shaking easily get redispersed, and no colour change was evident upon storage. Microscopic observation of aqueous liposomes showed absence of drug precipitation; however the particle size was markedly increased.

At 2-8º, aqueous liposomes showed lesser aggregates compared to the ones stored at ambient conditions in which aggregates of liposomal vesicles were observed. Particle size distribution of aqueous liposomes stored at different conditions showed shifting towards increasing the particle size and the range of particle size was also increased as the time increased. Several reports on light scattering studies of the coalescence kinetics of liposomes have revealed that the average cluster size grows with time following a characteristic behaviour. After the aggregation, liposomes tend to form large vesicles via coalescence [3].

The effect on FPF of the freshly prepared liposomes was compared with stored freeze dried and aqueous liposomes. FPF was determined using TSI. For freeze dried liposomes, increase in storage time did not significantly change the FPF in six months storage at both the storage conditions. On the other hand, aqueous dispersion showed decrease in FPF at the different storage conditions. This decrease in the FPF can be attributed to the increase in particle size.

Drug delivery to or via the respiratory tree has been a long standing pharmaceutical objective. For locally acting agents it is desirable to confine the action of the drug to the lungs in order to eliminate unintended side effects, which might result following absorption and distribution to other extra vascular sites. Oral inhalation is often the preferred route in order that such effects can be minimized. Here, ETP-loaded liposomes were developed optimized and evaluated for its suitability for pulmonary sustained drug delivery for treatment of cancer. Liposomes were successfully developed and freeze dried using trehalose as cryoprotectant. Further in vivo safety and deposition studies in suitable animal models will give better insight for clinical applications of the inhalable ETP liposomes.