Hepatitis, food additives, alcohol, toxic chemicals, viral infection and pollutants are the major risk factors of liver toxicity, which is an important pathology worldwide. In experimental hepatopathy, carbon tetrachloride (CCl4) has been commonly used because it forms unstable trichloromethyl and peroxy radicals, which are capable of binding to proteins or lipids, initiating lipid peroxidation and liver damage [1]. It was well documented that experimentally induced cirrhotic response in animals by CCl4 has been shown to be similar to human liver cirrhosis [2-4].

One of the major features of metabolic syndrome is dyslipidemia, characterized by elevated levels of very low-density lipoprotein (VLDL), triglyceride (TG) and low density lipoprotein (LDL) [5]. Elevated plasma VLDL and TG levels are due, in large part, to an increase in hepatic overproduction of TGenriched VLDL particles [6]. CCl4-induced toxicity, studied for its hepatotoxic properties, also in turn increase the accumulation of fat in the liver leading to hyperlipidemia.

Mounting evidence suggests that reactive oxygen species (ROS) play a pivotal role in liver-disease pathology and ROS have been proven to be associated with CCl4-induced hepatotoxicity [1,7-9]. Therefore, therapeutic approach using potential antioxidants might be an ideal approach to ameliorate liver damage and hyperlipidemic conditions. In recent decades, the potential use of natural products and their active constituents with immense antioxidant functions has attracted much interest from researchers in the treatment of various liver disorders [10,11].

Olea europaea Linn. (Oleaceae) commonly known as olive is among the oldest cultivated trees in the world with immense medicinal values. Olives and its associated products have been used widely as folk medicines in Spain, Italy, France, Greece, Israel, Morocco, Tunisia, Turkey and the Mediterranean islands for centuries [12]. Today, the olive plant is most well known for its fruit crop and oil. As a folk remedy, olives have been used to reduce the incidence of heart diseases [13]. Experimental studies on the fruits and leaf extracts from olives show that they possess antithrombotic, antihypertensive, anticancer, hypoglycemic, antiinflammatory, antimicrobial and antiatherogenic properties [14,15]. The major active components of olives are phenolic compounds including oleuropein, hydroxytyrosol, tyrosol, 4-hydroxyphenyl acetic acid, protocatechuic acid, caffeic acid and p-coumaric acid. Several other biologically active constituents are also present [14,15]. Although the hepatoprotective actions of olive leaf aqueous extract have been confirmed in rats [16], studies on the olive fruit pulp extracts and their beneficial effects on restoring the lipid profile against CCl4- induced hepatic damage have not been addressed. During the processing of olive extracts for its oil, the fruit pulp is treated as waste. However, many phenolic compounds remain in the by-products. Olivemill waste water known as ?alpechin? and olive oil cake known as ?alperujo? contain a similar phenolic profile to that of the original fruit. Therefore, in the present investigation the hepatoprotective effects of Olea europaea fruit pulp extract (OFP-EA) and the changes in lipid profile was investigated against CCl4-induced acute and chronic hepatic damage in experimental mice. Further the antioxidant properties of OFP-EA were also evaluated to substantiate the hepatoprotective effects.

Male ICR mice (15-16 g) were obtained from NARA Biotech (Seoul, Korea). The animals were kept under standard laboratory conditions. A 12 h light/dark cycle in a temperature and humidity controlled room with water and food ad libitum was maintained. All animal experiments were performed in accordance and approval with our Institutional Animal Care and Use Committee of Konkuk University and the International Guidelines for Handling of Laboratory Animals [17]. Mice were anaesthetized by ketamine (160 mg/kg)/xylazine (40 mg/kg) cocktail injections, intraperitoneally.

Green olive fruits collected at the end of September to about the middle of November were obtained from the local market, Seoul, South Korea. The collected fruit material was authenticated at Konkuk University, Korea and a voucher specimen (OL-KU2012) has been kept in our university herbarium for future reference. To obtain the olive fruit pulp extract, 500 g of the fruit were ground in a mixer and defatted three times with three volumes of 80% ethanol. The residue (fruit pulp) was extracted with absolute ethanol (EtOH) at 1:10 ratio (w/v) for 2 h in a heating mantle at 70-80°. The supernatant was filtered and concentrated in a rotatory evaporator at 50°. The ethanol extract of olive fruit pulp obtained (180 g) was resuspended in water: EtOH (9:1, v/v) and partitioned successively with n-hexane, ethyl acetate (EA) and n-butanol to obtain a final yield of 19.4, 52 and 27.27 %, respectively. Since EA fraction of olive fruit pulp (OFP-EA) extract showed potent antioxidant effect in our preliminary evaluation, further studies on hepatoprotective effects in CCl4-induced hepatic damage in mice was investigated using OFP-EA extract. The extract was dissolved in sterile distilled water and filtered on 0.22 µm filters before use. All reagents used in this study were of highest grade available commercially.

The animals were randomly divided into four groups of six mice each. Group A served as the normal vehicle control and was administrated orally with 2 ml/kg corn oil daily for a period of 7 weeks. Group B orally administrated with 2 ml/kg body weight of CCl4 (20% CCl4 in corn oil) once a day for 7 weeks. The animals of Group C were pretreated with silymarin (200 mg/kg per day, dissolved into 0.1% DMSO) served as positive control and group D were pretreated with OFP-EA extract (200 mg/ kg per day) orally for 7 weeks, respectively before CCl4 treatment. At the end of experiment, animals were sacrificed and the blood samples were collected into heparinized tubes for each group separately. Liver tissue was dissected out, washed immediately with ice-cold saline, weighted and then immediately stored at -70° until analysis. The same protocol was followed to achieve acute liver injury model in mice except that the time period was set for three days.

Alkyl radicals were generated by 2,2-azobis (2-amidinopropane)hydrochloride (AAPH, Sigma Chemical Co., St. Louis, MO, USA). Reaction mixtures containing 40 mM AAPH, 40 mM 4-POBN, and the indicated concentrations of tested samples (20, 40. 80 and 100 µg/ml of OFP-EA) diluted in PBS (pH 7.4) were incubated at 37 ° in a water bath for 30 min [18] and then transferred to 50 µl Teflon capillary tubes. The spin adduct was recorded using the ESR spectrometer. The following measurement conditions were used: Central field 3475 G, modulation frequency 100 kHz, modulation amplitude 2 G, microwave power 10 mW, gain 6.3×105, and temperature 298 K. The radical-scavenging activities of the OPP-EA were calculated according to the following formula: Scavenging rate=(h0-hx)/h0×100%, where h0 and hx are the ESR signal intensities of samples with and without extract, respectively.

The serum biochemical data for the evaluation of CCl4-induced hepatotoxicity by measuring the ALT and AST as conventional indicator of the liver injury are shown in fig. 1a and b. There was a remarkable elevation of serum ALT and AST activities in the CCl4-treated group as compared to the vehicle control (ALT: 3.8 fold in acute injuries and 3.5 fold in chronic injuries; AST: 4 fold in acute and 4.2 fold in chronic), indicating CCl4-induced damage to the hepatic cells (P<0.01). However, administration of OFP-EA extract at a dosage of 200 mg/kg suppressed the elevated serum ALT and AST in a significant manner when compared to CCl4 alone treated group (P<0.05). The positive control silymarin treated group (200 mg/kg) also exhibited significant attenuation (P<0.05) when compared to CCl4 treated groups.

The serum biochemical data for the evaluation of CCl4-induced hepatotoxicity by measuring the ALP as conventional indicator of the liver injury in both acute and chronic phase after CCl4 toxicity was shown in fig. 1c. There was an elevation of serum ALP activity in the CCl4-treated group as compared to the vehicle control (P<0.05). However, a significant decrease in the ALP activity was observed in CCl4-treated mouse by 200 mg/kg of OFP-EA extract (P<0.05). Silymarin (200 mg/kg) also exhibited significant attenuation of ALP serum levels, when compared with the CCl4-treated group (P<0.05). These results demonstrate that the levels of ALT, AST and ALP were significantly restored by treatment with OFP-EA extract and on par with standard drug silymarin. The hydroxyl radical generated in the Fe2+/H2O2 system was trapped by DMPO, which formed the spin adduct detected by ESR spectroscopy, and the typical 1:2:2:1 ESR signal of the DMPO-OH adduct was observed. The height of the third peak in the spectrum represents the relative amounts of DMPO- OH adduct. The addition of the OPP-EA at indicated concentrations (25, 50, 100 and 200 µg/ml) resulted in a decrease in the peak corresponding to the DMPO-OH adduct. The maximum hydroxyl radical scavenging effect of OFP-EA was found to be 90.95% observed at 200 µg/ml concentrations (P<0.05, fig. 5a). The IC50 value of OPP-EA was determined to be 52.24 µg/ml. The decrease in the ESR signals for hydroxyl radical scavenging effect of OFP-EA was shown in fig. 5b. 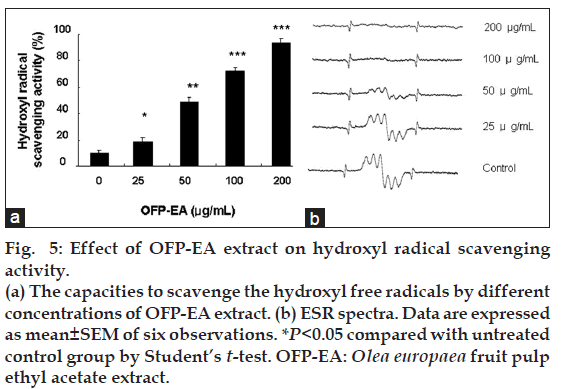 Natural herbs rich in antioxidant bioactive compounds may exert beneficial effects towards human health including liver diseases. The model of acute and chronic intoxication with CCl4 has been used for decades to investigate the response of liver injury, because the elementary lesions caused by this hepatotoxin replicate those seen in most cases of human liver diseases [21,22]. In the present investigation we have identified the hepatoprotective effects of OFP-EA extract against CCl4-induced acute and chronic liver injury in mice. Estimation of serum enzymes such as ALT, AST and ALP is a useful quantitative marker of extent and type of hepatocellular injuries. Therefore, the elevated releases of ALT, AST and ALP in the circulation indicate severe damage to hepatic tissues during CCl4 toxicity [23]. In the present study, OFP-EA extract significantly inhibited the elevated levels of ALT, AST and ALP indicating a clear improvement of the functional status of the liver cells.

Histopathological examination of liver sections further substantiated with the inhibition of elevated serum enzymes in CCl4-induced hepatotoxicity. Liver sections of vehicle control group showed normal cellular architecture when compared with CCl4 intoxicated animals. The liver sections of mice treated with OFP-EA extract and silymarin followed by CCl4 intoxication showed a sign of protection as it was evident by absence of necrosis and vacuoles.

Liver plays an important role in the regulation of lipoprotein transport in serum and cholesterol metabolism. During lipoprotein transport, LDL and HDL appear to be especially pivotal. LDL, rich in cholesterol and cholesterol ester, is regarded as bad cholesterol, whereas HDL contains relatively little cholesterol and is regarded as good cholesterol. Reports suggested that high levels of serum cholesterol, LDL, and TG and low levels of HDL were induced with CCl4 in animal model systems [24-26]. Therefore, to evaluate whether OFP-EA extract has any influence in hyperlipidemia induced by CCl4, cholesterol catabolism was investigated. In the present study OFP-EA extract significantly prevented CCl4-induced liver damage as evidenced by reduced serum concentrations of cholesterol contents. Data form our study indicated that OFP-EA extract restored the CCl4-induced increased lipid levels to near normal levels.

Silymarin has been long used in the treatment for liver diseases as it restores liver enzyme activities due to its antioxidant properties, chelating metal ions, inhibiting lipid peroxidation, protecting the membrane permeability properties, and preventing liver glutathione depletion [27]. Therefore in the present study we used silymarin as standard agent to compare the effects of OFP-EA extract in CCl4-induced liver injury in mice. The extract showed similar or greater significant effect when compared with standard agent silymarin at the same dose tested in CCl4-induced acute and chronic liver damage in mice

Several reports have indicated that a pivotal mechanism in hepatoprotective effects may relate to the activities of antioxidants to scavenge ROS and/or alleviate CCl4-induced toxic effects by the prevention of toxic free radicals such as hydroxyl, alkyl and lipid peroxides [28-30]. Moreover, the initiation of oxidative stress in acute and chronic liver diseases is believed to be induced by increased free radicals [31]. Earlier studies revealed that olive oil phenols possessed strong antioxidant compounds [14,15,32,33]. In our present study, OFP-EA significantly scavenged the alkyl and hydroxyl free radicals significantly indicating that the fruit pulp extract of olive might also contain potential antioxidant agents. In conclusion, our findings showed that OFP-EA extract significantly prevented CCl4-induced liver damage as evidenced by decreased serum activities of AST, ALT and ALP. OFP-EA extract also modulated serum concentrations of cholesterol contents suggesting its beneficial effects in hepatoprotection. The hepatoprotective effects of OFP-EA extract might partly be due to its antioxidant properties. However, further work is necessary in exploring the exact molecular mechanisms and the compounds responsible in delivering such actions.