Prolonged release drug delivery system of stavudine was made by ionotropic gelation and polyelectrolyte complexation technique. Cross-linking reinforced chitosan-gellan complex beads were prepared by gelation of anionic gellan gum, the primary polymer, with oppositely charged counter ion to form beads which were further complexed with chitosan as a polyelectrolyte. The effect of this polymer on release profile of drug was studied. Beads without chitosan complexation were also made. The reaction of chitosan-gellan complex dominates the formation of skin layer on the surface of beads. Stavudine an antiretroviral drug was selected as novel drug for the experiment. The final formulations were subjected to in vitro evaluation and several characterization studies. Batches with gellan gum shows Higuchi model, while chitosan-gellan shows zero order release. All the batches with copolymer showed sustained the drug release more than 12 h, whereas with gellan gum alone showed up to 10 h. Batches with chitosan showed maximum drug encapsulation efficiency

Stavudine, 2′,3′-didehydro-3′-deoxythymidine (D4T) is a thymidine analog approved for the treatment of HIV infection [1] like other member of this class of antiretrovirals, its purported active metabolite, D4T-5′-triphosphate, is an inhibitor of the HIV reverse transcriptase and as a chain terminator during DNA synthesis [2]. Stavudine is currently approved by US-FDA for the treatment of patients who have become intolerant or failed to response to zidovudine, didanosine or zalcitabine therapy. The mean serum elimination half life of stavudine was reported in the ranges between 1 to 1.67 h in adults. Stavudine is given 40 mg twice daily. The dose related adverse effect is peripheral neuropathy. Converting twice daily regimen of stavudine into once daily improve adherence and, therefore, enhances the effectiveness of antiretroviral therapy. For many drugs, the optimal therapeutic response is observed only when adequate blood levels are achieved and maintained with minimal variation. Sustained release products have become important for the oral administration of many drugs because they give more consistent blood levels [3].

The beads were prepared by the ionotropic gelation technique. Gellan gum solution was prepared by dissolving in deionized water and heated at 60°. Different concentrations of the drug was dissolved/ dispersed uniformly in 50 ml of gellan solution below 40° under continuous stirring. The stirring was continued after complete addition until a uniform dispersion was obtained. The resultant homogeneous bubble free slurry dispersion was dropped through a 21G syringe needle into 100 ml of calcium chloride solution containing different concentrations of chitosan solutions, which was kept under stirring to improve the mechanical strength of the beads and also to prevent aggregation of the formed beads. Immediate formation of small gellan beads took place; after 5 min of curing time, the formed beads were collected by filtration and dried at 40°. The gellan beads without chitosan were also prepared by dropping the gellan slurry containing different amounts of drug into 100 ml of calcium chloride solution.

The prepared beads were subjected for particle size analysis using a digimatic micrometer (MDC-25S Mitutoyo, Tokyo, Japan) having an accuracy of 0.001 mm. The average diameter of the 100 particles per batch was calculated.

Known amount of beads (20 mg) were added to 20 ml USP phosphate buffer of pH 7.4 solution for complete swelling at 37°. The beads were crushed in a glass mortar with pestle the solution was than kept for 2 h to extract the drug completely and centrifuged to remove polymeric debris. The clear supernatant solution was analyzed for drug content using UVvisible spectrophotometer at 266 nm (Pharmaspec-UV/ Visible spectrophotometer, Simadzu, Japan).

The release of the entrapped drug from hydrogels depends on the swelling behavior, because swelling is directly proportional to drug release in case of hydrogels. As the hydrogel swells, the pores of network open and release of the entrapped solute occurs. Therefore, the dynamic swelling study of the prepared beads was carried out. The dynamic swelling behavior of the beads was studied by mass measurement. The 50 mg of beads were incubated into the glass vials, with 25 ml phosphate buffer, pH 1.2 and pH 7.4 and stirred using a magnet set at 200 rpm at 37°. The beads were taken out at different time intervals and blotted carefully without pressing hard to remove the excess surface liquid. The swollen beads were weighed using the electronic microbalance. The weights determined were used for plotting the swelling profile. The percent water uptake (Q) at different time intervals was calculated using the following equation. Q=[(W2-W1)/W1]×100. Where, W1 is mass of the dry beads and W2 is the mass of swollen beads. Each swelling experiment was repeated three times, and the average value was taken as the percentage swelling value.

Thermal behavior of the beads was examined by using a thermal analyzer (DSC Q20 V24.4 BUILD116, USA). The samples were heated from 0-300o at a heating rate of 10°/min under argon atmosphere in a micro calorimeter and then thermograms were obtained.

The surface morphology of the beads was investigated using scanning electron microscope (JEOL, JSM- 35CF, Japan). The beads were mounted onto stubs using double sided adhesive tape and sputter coated with platinum using a sputter coater. The coated beads were observed under SEM instrument at the required magnification at room temperature. The acceleration voltage used was 10 kV with the secondary electron image as a detector.

In vitro drug release studies were performed on the beads, using a dissolution apparatus (USPXXIII, Electro lab, Mumbai). A weighed amount of individual bead formulations were added to the dissolution vessel, which contains 500 ml of phosphate buffer (pH 1.2) for 2 h and the same amount of phosphate buffer (pH 7.4) till end of the study at 37.0±0.5° with 50 rpm paddle speed. At set times, 5 ml aliquots were withdrawn, filtered and amount of drug released was assayed spectrophotometrically at 266 nm. The same amount of medium was replaced with fresh buffer solution. The release data were fitted to various mathematical models to know which model is best fitting the obtained release profile.

The details of formulation composition, results of hydrogel bead size and drug encapsulation efficiency (DEE) of various batches prepared beads are shown in Table 1. The prepared microbeads were smooth and free flowing. The DEE was found to be in the range of 44.89±0.052 to 72.42±0.013%. The results revealed that the DEE of the beads increased with increase in the concentration of polymer. The higher concentration of polymers in their ionized state resulted in intense cross-linking. Hence, as the polymer concentration increased the encapsulation efficiency was also increased. As wherever we increased the concentration of drug the encapsulation efficiency was found to be decreased. The formulations containing chitosan showed higher DEE when compared to the formulations which are not containing chitosan. The bead diameter varied from 617±2.32 to 823±2.31 µm for different batches. The results indicated that as the amount of gellan increased, the size of beads also proportionally increased. This could be attributed to the increase in micro-viscosity of the polymeric dispersion due to increased gellan concentration, which eventually led to formation of bigger beads. 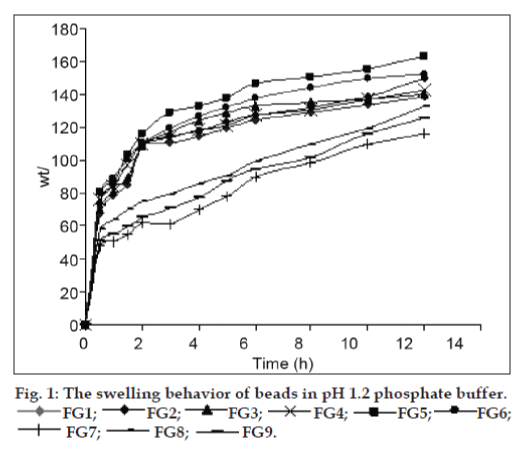 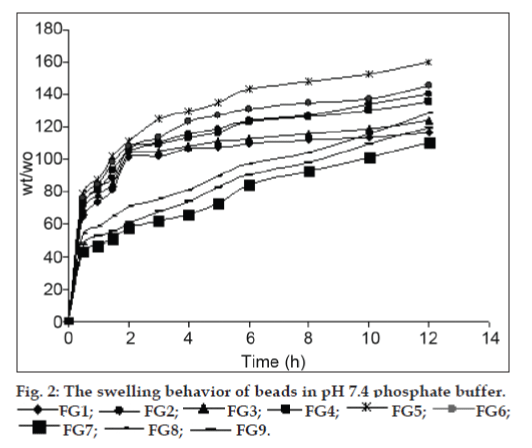 In an effort to investigate the possible physical and chemical interactions between drug and polymer, we have carried out thermal analysis of pure stavudine, placebo beads and drug-loaded beads using DSC instrument. The DSC thermogram (fig. 3) showed a sharp endothermic peak at 171.17° for pure drug which indicates the melting point of drug. In placebo beads, thermal transition was appeared at 200.92°, which is attributed to the melting point of the gellan gum. However, the sharp endothermic peak of drug in drug-loaded beads has not appeared indicating that the drug was uniformly dispersed in an amorphous state in the polymer matrix. Hence, the evaluation of the thermograms clearly revealed that there is no physical interaction between the polymer and drug in the formulation. The surface morphology was examined by scanning electron microscopy (SEM) studies (fig. 4). The SEM microphotographs revealed that the beads were irregular in shape having smooth and dense surface with inward dent and shrinkage due to the collapse of the wall of the beads during dehydration. The fibrous network was also found on the surface of the beads. The crystalinity of the drug in formulation was investigated by XRD study. The X-ray powder diffraction (fig. 5) pattern of pure drug has shown its own characteristic crystal peaks between 2θ of 10° and 80°. Whereas, characteristic peaks of drug were absent in gellan-chitosan beads indicating probable decreased crystallinity of the drug. The undefined, broad, diffused peaks with the low intensities for drug loaded beads indicated that the conversion of drug from crystalline to amorphous state in the formulation. 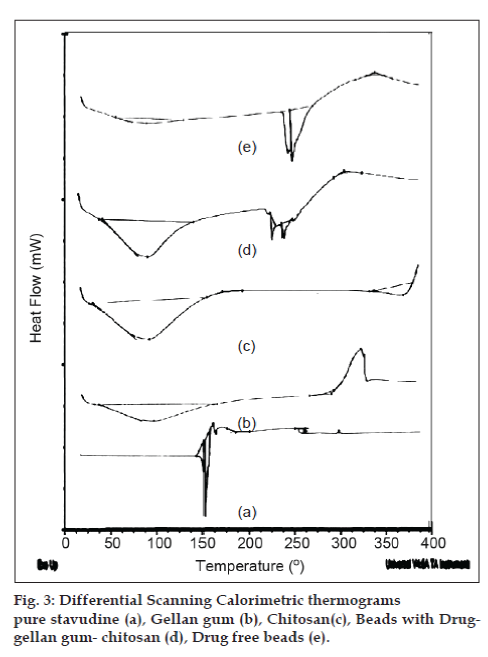 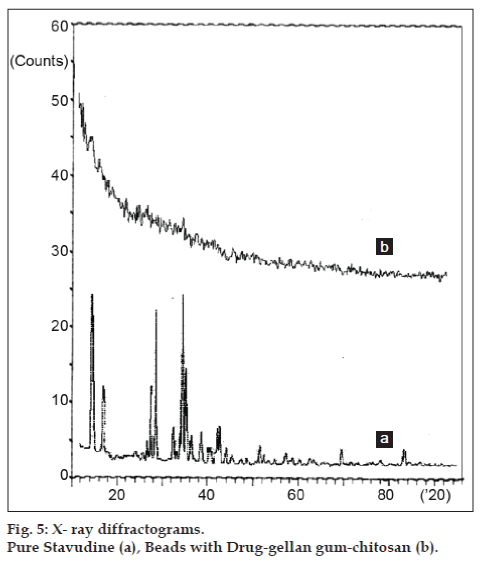 The In vitro drug release profiles of prepared beads of different batches are shown in fig. 6. The results revealed that the rate and extent of drug release from beads significantly decreased with an increase in gellan gum concentration. This could be attributed to the increase of gellan gum matrix density and in the diffusion path length which the drug molecules have to traverse. The drug release from these beads was characterized by an initial phase of high release (burst effect). However, as gelation proceeded (cross-linking of gellan gum with Ca2+ ions), the remaining drug was released at a slower rate followed by a phase of moderate release. This bi-phasic pattern of release is a characteristic feature of matrix diffusion kinetics [8]. The initial burst effect was considerably reduced with the increase in gellan gum concentration. The initial burst effect from batches of chitosan-coated beads was considerably reduced when compared to the corresponding batches of non-coated beads. The fact is that chitosan coating over the beads resulted in better incorporation efficiency and formed a thick coating layer around the beads. This could be the reason for the observed decrease in the burst effect. 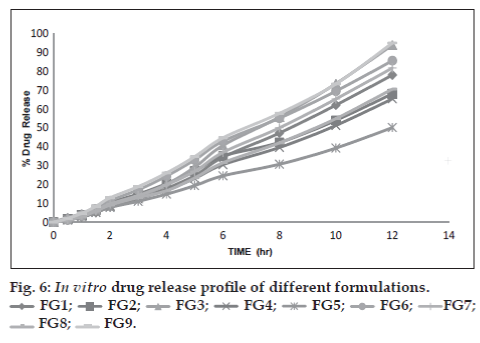 In order to investigate the mechanism of drug release, the data were fitted to models representing zero-order, Korsmeyer′s and Higuchi′s square root of time [9]. The data are given in Table 2. The examination of coefficient of determination (R2) indicated that drug release from the prepared beads followed a diffusion controlled mechanism, since the R2 values for zeroorder were always higher (0.969 to 0.995) compared to Higuchi′s square root of time (0.729 to 0.813). Whereas, for the Korsmeyer′s Equation these values were in the range of 0.693 and 0.894. This indicates that the release from the prepared beads followed a biphasic profile. Hence, it was decided to use a more stringent test in order to distinguish between the mechanisms of drug release. The release data were fitted to the Peppas exponential model [10], Mt/ M∞ = Ktn, where Mt/M∞ is the fraction of drug released after time t, K is the kinetic constant and n is the release exponent which characterizes the drug transport mechanism. The n values were in the range of 1.310 to 1.601 indicating that all the prepared hydrogel bead formulations followed the Fickian diffusion controlled mechanism of drug release. Hence, it can be concluded from the study that, among the prepared formulations with respect to entrapment efficiency, swelling studies and in-vitro drug release, the gellan-chitosan beads prepared by ionotropic geltion and polyelectrolyte complexation method found to be better than ionically cross linked gellan beads alone. Therefore, dual cross-linked beads are promising carrier for oral control release.