The conventional method for the isolation of liver microsomes as a source of drug metabolizing enzymes (mainly cytochrome P450, CYP450), from the animal livers, involves differential centrifugation technique [1,2]. In the technique, the liver homogenate is first centrifuged at lower speeds (13,000×g for 30 min) to separate cell debris, nuclei, and mitochondria. Further, in the second step, ultracentrifugation of the supernatant at 1,00,000 × g for 1 h, yields microsomes.

In an alternative reported method [3-10], the same can be achieved without the use of an ultracentrifuge. This method involves the use of calcium for the aggregation of microsomes, yielding a complex with a higher density, and consequently, better sedimentation potential. However, this method has been evaluated in a limited manner with respect to its utility in obtaining microsomes from different animal tissues and species. In this regard, the methods have been applied for isolation of microsomes from rat [3-8], guinea pig [9], and cod tissues [10].The objective of the present work, was to evaluate and extend the utility of calcium aggregation method for the isolation of hepatic microsomes, from different animal species.

The animal livers were obtained from the Pharmacology Department, Bombay College of Pharmacy, Mumbai. The animals and the strains used were as follows: Rat (Charles Foster), Mouse (Swiss Albino), Guinea pig (Albino), Rabbit (New Zealand). The animals used in this study were those that were sacrificed as part of other experiments approved by the Institutional Animal Ethics Committee. It should be noted that, the potential of these experiments to alter liver function (and consequently cytochrome P450 content), although a possibility, was not taken into consideration, since the intention of this study was to only evaluate the microsomal isolation procedure. The livers obtained, were stored at -70° until use. Triton X-100 R, sodium dithionite AR, p-nitrophenol, and perchloric acid (70%), were obtained from S. D. Fine Chem Ltd., Mumbai. Carbon monoxide gas (reagent purity) was obtained from Alchemie Gases and Chemicals Pvt. Ltd., Mumbai. Trizma-base was purchased from Sigma Chemical Co., USA. Bradford’s macromethod kit for protein estimation was purchased from Bangalore Genei Pvt. Ltd., Bangalore. p-Nitrocatechol was purchased from Lancaster Chemicals, Mumbai. Salicylamide was obtained from SRL Chemicals Ltd., Pune. Acetonitrile (HPLC grade) was purchased from Merck Chemicals Ltd., Mumbai, while trifluoroacetic acid was purchased from Spectrochem Pvt. Ltd., Mumbai. The Macherey Nagel RP C18 (250 × 4.6 mm, 5 μm) column was a gift from Wockhardt Ltd., Aurangabad. All other chemicals were of analytical grade.

The method of Schenkman and Cinti with minor modifications, was used for isolation of microsomes. [4] Briefly, excised livers (20 g) were thawed, finely chopped with a pair of scissors, and homogenized with four volumes (80 ml) of ice cold 10 mM Tris-HCl buffer containing 0.25 M sucrose, pH 7.4, in a Potter glass homogenizer equipped with a Teflon pestle. The homogenate was centrifuged at 13,000 × g for 10 min at 4° in a refrigerated centrifuge (Biofuge Stratos), and the precipitate was discarded. To the supernatant, calcium chloride was added to yield a final concentration of 10 mM. The solution was stirred for 15-20 min, and then centrifuged at 25,000 × g for 10 min at 4°. The firmly packed pellets of microsomes were resuspended by homogenization in 100 mM Tris-HCl buffer containing 20% w/v glycerol and 10 mM EDTA, pH 7.4. The microsomes were stored at –70° until use. The entire microsomal isolation protocol was carried out at 0-4°, in an ice bath. It should be noted that, for preparation of mouse liver microsomes, only 5 g of liver was used, due to smaller yields of liver tissue per animal.

Spectral CYP450 content was determined by the method of Omura and Sato [11]. Briefly, the microsomes were diluted in the ratio 1:9 with 0.1 M potassium phosphate buffer, pH 7.4, containing 0.5% Triton X-100, and 1 mM EDTA. The solution was stirred thoroughly, and divided into two 5 ml glass cuvettes. The sample and reference cuvettes containing the microsomal preparations were saturated with 30 to 40 bubbles of carbon monoxide, at a rate of about 1 bubble/sec. Sodium dithionite was added only to the sample cuvette, to obtain a reduced carbon monoxide Vs oxidized carbon monoxide difference spectrum. An extinction coefficient of 106 l/mmol/cm was used for the determination of CYP450 content [12].

Protein estimation of the microsomal preparation was done using Bradford’s macromethod, with a kit obtained from Bangalore Genei Pvt. Ltd. Calibration curve and sample preparation was done according to the manufacturer’s instructions. Calibration curve/standard protein plot was prepared using bovine serum albumin, as the protein standard. The optical density was read on a Shimadzu-160A UV/Vis spectrophotometer at 625 nm.

The catalytic competency of the isolated liver microsomes was evaluated by monitoring the ability of the microsomes to form p-nitrocatechol from p-nitrophenol. Incubations were performed as described previously [13,14], with minor modifications. Briefly, the incubations were conducted in a total volume of 0.5 ml of 0.1 M sodium phosphate buffer containing 0.001 M EDTA, pH 7.4 and contained 100 μl microsomes, p-nitrophenol at a final concentration of 40 μM, and 0.6 mM NADPH. Incubations were initiated with NADPH, and were performed at 37° for 30 min. After incubation, the reactions were stopped with 250 μl of 0.6 M perchloric acid. Control incubations were also performed either without microsomes or without pnitrophenol, in order to evaluate the possible interference from incubation components. After stoppage of incubation, 50 μl of a 70 μg/ml solution of salicylamide was added as internal standard, followed by addition of 500 mg ammonium sulfate. The samples were then extracted with 4 ml diethyl ether, and the organic layer was separated. The ether layer was evaporated at 40°, and the residue reconstituted in 0.5 ml mobile phase for HPLC analysis. HPLC analysis was done with minor modifications of the method reported previously. [15] HPLC analysis was performed with a Jasco HPLC with PU-980 intelligent pump, equipped with a UV-975 detector and Jasco-Borwin software (version 1.5), with Hercule-2000 interface. A Macherey Nagel RP C-18 (250 × 4.6 mm, 5 μm) column was used. The mobile phase composition was acetonitrile:0.1%, trifluoroacetic acid (35:65 v/v%) (pH~2.1), with a flow rate of 1.2 ml/min, and detection at 345 nm. Twenty microlitres of sample was injected onto the HPLC column for analysis. A standard curve of pnitrocatechol with range from 0.05 to 10 μM (0.05, 0.1, 0.2, 0.5, 1, 2, 5, and 10) was prepared in 0.1 M sodium phosphate buffer, pH 7.4 matrix. The mean retention times for salicylamide, p-nitrocatechol, and p-nitrophenol were found to be 4.3, 4.9, and 7.5 min, respectively, under the stated HPLC conditions. The standard (calibration) curve was plotted using area ratio of pnitrocatechol to internal standard on the ordinate, and concentration of p-nitrocatechol on the abscissa. Linear regression (Microsoft Excel XP) was performed, to obtain the regression equation, and the unknown concentrations of p-nitrocatechol in the incubations were obtained by interpolation.

Spectral CYP450 was detected in microsomes from all four animal species. The mean values for CYP450 content, protein content, and the specific CYP450 content values, are given in Table 1. Since pooled liver tissue was not used in these experiments, no standard deviation and coefficient of variation, associated with the isolation protocol, has been calculated. Isolation of the microsomal fraction from liver tissue (or any other tissue), generally, is conventionally accomplished by differential ultracentrifugation method, and involves two sequential centrifugation steps at 13,000 × g (30 min) and 1,00,000 × g (1 h), to ultimately yield a pellet designated the microsomal fraction [1,2]. The major drawback of this procedure is the requirement of an ultracentrifuge. Ultracentrifuges are fairly expensive, and may not be within the means of many research laboratories. An alternative, is to use the calcium-aggregation method, which uses a cooled high-speed centrifuge rather than an ultracentrifuge. Previous studies have shown the utility of this method for isolation of rat tissue microsomes [3-8], guinea pig liver micrsomes [9], and cod liver microsomes [10]. We have tried to extend the utility of this method for other sources of microsomes. Some reported values for the specific P450 content for microsomes obtained from of rat livers using ultracentrifuge method, are 0.2 to 0.4 nmole CYP450/mg protein [4], and 1.7-2.7 nmole CYP450/mg protein [5]; and that from rabbit livers by ultracentrifugation, is 1.55 nmole CYP450/mg protein [5]. The values obtained in this study (0.378-0.677 nmole CYP450/mg protein) are in reasonable agreement with the reported values. In this regard, comparisons of results of calcium aggregation and ultracentrifuge methods, have yielded conflicting results. Aitio et al. observed lower protein yields, but higher specific activity of monooxygenase and glucuronsyltransferase activities by the ultracentrifuge method [5]. On the other hand, Yeh reported that ultracentrifuge method gave higher yields of microsomal protein, while the specific enzyme activity was the same for both methods [6]. Ecobichon et al. however found calcium aggregation method to be superior to ultracentrifugation, for isolation of guinea pig liver microsomes [9]. We were unable to perform a direct comparison of the calcium aggregation method versus the conventional ultracentrifugation method, due to the nonavailability of an ultracentrifuge in-house. We realize that such an experiment would have been more appropriate for comparative purposes. However, an evaluation of literature reports does indicate, that the two methods seem comparable in terms of the quality of microsomes obtained [3-10]. In addition to determination of spectral CYP450 content, we also evaluated the p-nitrophenol hydroxylase activity of the isolated liver microsomes. p-Nitrophenol hydroxylase activity is mediated by CYP2E1, in human liver microsomes [13,14]. Further, based on the amino acid sequence homology, this isoform is almost identical across many animal species [16]. It is for this reason, that CYP2E1 activity was chosen to evaluate the general catalytic competency of the isolated microsomes, across the four animal species. All the animal liver microsomes showed the ability to biotransform pnitrophenol indicative of the catalytic competency of the isolated microsomes, at least with respect to oxidative CYP2E1 activity. A typical HPLC chromatogram of a microsomal incubation is shown in Fig. 1. The overall ability of the liver microsomes to catalyze p-nitrophenol hydroxylation is given in Table 1. 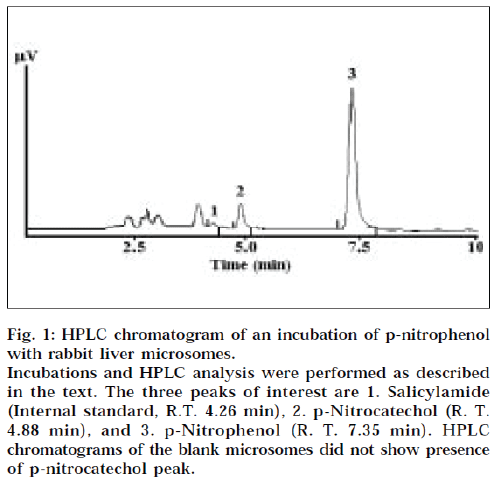 Figure 1: HPLC chromatogram of an incubation of p-nitrophenol with rabbit liver microsomes.
Incubations and HPLC analysis were performed as described in the text. The three peaks of interest are 1. Salicylamide (Internal standard, R.T. 4.26 min), 2. p-Nitrocatechol (R. T. 4.88 min), and 3. p-Nitrophenol (R. T. 7.35 min). HPLC chromatograms of the blank microsomes did not show presence of p-nitrocatechol peak.

All values reported in the tables represent the mean values obtained from three separate microsomal samples isolated for each animal liver sample, except for p-nitrocatechol formation which is the mean of a duplicate experiment conducted with one liver microsomal sample.

In conclusion, the data obtained in this study indicates, that the calcium aggregation method is useful for isolation of mouse, rabbit, and guinea pig liver microsomes, and could be convenient for rapid and large scale preparation of microsomes, from animal and potentially human livers, for drug metabolism studies.

The authors would like to extend special thanks to Dr. M. L. Kubal, Wockhardt Ltd., Aurangabad for providing HPLC columns used in this work and Mr. Rajendra Kadam for help in the preparation of the manuscript. The authors also wish to thank AICTE (File No. 8019/RDII/ R&D/PHA (213) 2000-01) for providing the research grant for this work.