The roots of Cucurbita pepo were investigated with the aim of identifying bioactive constituents with therapeutic potentials. To achieve this, the roots of Cucurbita pepo were harvested, washed, air dried and grounded into the powder. The ground material was extracted using hexane, ethyl acetate and methanol. The extracts were fractionated using column chromatography and fractions were monitored using thin layer chromatography. The fractions were characterised using proton nuclear magnetic resonance and carbon-13 nuclear magnetic resonance spectroscopy. Phytochemical screening showed that the extracts contained sterols and terpenoids, alkaloids, resins, flavonoids, saponins and carbohydrates. Nuclear magnetic resonance analysis led to the identification of hexadecanoic acid or palmitic acid, alphaspinasterol and squalene. Some of these compounds may represent a new pharmacological approach in the development of novel and adjuvant therapy for several medical conditions.

Plants are rich in bioactive compounds that have various medicinal properties [1-3]. Developments in technology have made it possible to identify and purify these secondary metabolites which have served as the backbone in the formulation of many pharmaceutical drugs [4]. In addition to the various side effects and limited efficacy of orthodox drugs, there is an increase in the development of resistance by disease causing organisms to orthodox drugs with the tendency of the disease to reoccur [5]. This has led to a growing interest in the search for alternative therapeutic drugs derived from plants.

Phytochemical studies are driven by the need for the discovery of inexpensive, safer and new drugs which is performed by screening different parts (root, leave, stem and seed) of local medicinal plants in order to develop drugs to combat various health challenges faced by man [6]. Pumpkin belongs to the family Cucubitaceae and is comprised of Cucurbita moschata, Cucurbita pepo, Cucurbita maxima, Cucurbita mixta, Cucurbita ficifolia and Telfairia occidentalis. The economically important species cultivated worldwide are Cucurbita pepo, Cucurbita maxima and Cucurbita moschata [7,8]. The use of pumpkin in various traditional medicines for the treatment of several ailments has attracted scientific attention to this plant [9]. Pumpkin contains biologically active components that include polysaccharides, para-aminobenzoic acid, ﬁxed oils, sterol, proteins and peptides [10] . While the fruits are a good source of carotenoid and gamma-aminobutyric acid [11,12], the presence of anti-nutrients in pumpkin seeds have limited the usefulness of fresh pumpkin seed as a protein source for human food [13-15]. Phytochemicals such as polysaccharides, phenolic glycosides, 13-hydroxy- 9Z, 11E-octadecatrienoic acid from the leaves of pumpkin and proteins from germinated seeds have been isolated [16-18].

This study focused on the roots of Cucurbita pepo (pumpkin). Ethno-medicinal reports indicate the traditional use of different parts of the plant (seed, fruit, vegetative part) in the treatment of different health problems and as functional food [21-24] but no work has been carried out on the roots. There is a growing interest in determining the scientific basis for the usage of plants in primary health care and in discovering novel compounds of pharmaceutical importance [25]. In this study, column chromatography was used to isolate some bioactive compounds and NMR used to identify the isolated compounds from the roots of Cucurbita pepo.

The roots of Cucurbita pepo were collected from a farm within the University of Nigeria, Nsukka. The plant was authenticated by a taxonomist in the Department of Plant Sciences and Biotechnology, of the University and a voucher specimen was deposited at the herbarium as UNH no. 552. The roots were washed and air dried. Once completely dry, the roots were ground to powder using a blender. The ground roots were stored in closed containers at room temperature until required.

The powdered material (350 g) was introduced into a Winchester bottle and macerated successively for 48 h with 700 ml of hexane, ethyl acetate and methanol. The extracts were filtered into clean glass jars using Whatman No.1 filter papers and allowed to dry in fume hood. All extracts were subjected to phytochemical tests using the procedure outlined by Trease et al. [26] to detect the presence of secondary metabolites. Test for the presence of carbohydrates, alkaloids, glycosides, saponins, flavonoids, resins, steroids terpenoids, reducing sugars and tannins were carried out.

The ethyl acetate extract was fractionated using column chromatography as described by Hostettmann et al. [27]. The extract was adsorbed onto silica gel and dried until a free flowing powder was obtained. It was then loaded onto a column packed with 150 g silica gel. The column was eluted gradient wise with increasing amounts of ethyl acetate in hexane until 100 % ethyl acetate. Column fractions were monitored using thin layer chromatography and further purified by repeated CC. Similar fractions were combined on the basis of TLC and allowed to dry.

Phytochemical screening of extracts showed that the root extracts of Cucurbita pepo contained sterols and terpenoids, alkaloids, resins, flavonoids, saponins and carbohydrates. NMR analysis led to the identification of the below mentioned compounds.

The identity of this compound was confirmed to be hexadecanoic acid or palmitic acid (fig. 1). The 1HNMR spectrum showed the features of an aliphatic carboxylic acid at region between δH 0.81-2.41. The spectrum showed the presence of a set of long chain methylene protons representing 11 methylene groups overlapped as a broad peak at 1.25 ppm. The 13C NMR spectrum showed seven signals including a carbonyl signal at δC 178.30, a terminal methyl (C-16) at δC 14.1 and methylene carbons (C-4 to C-13) overlapped between 29.0-29.5 ppm (fig. 2). 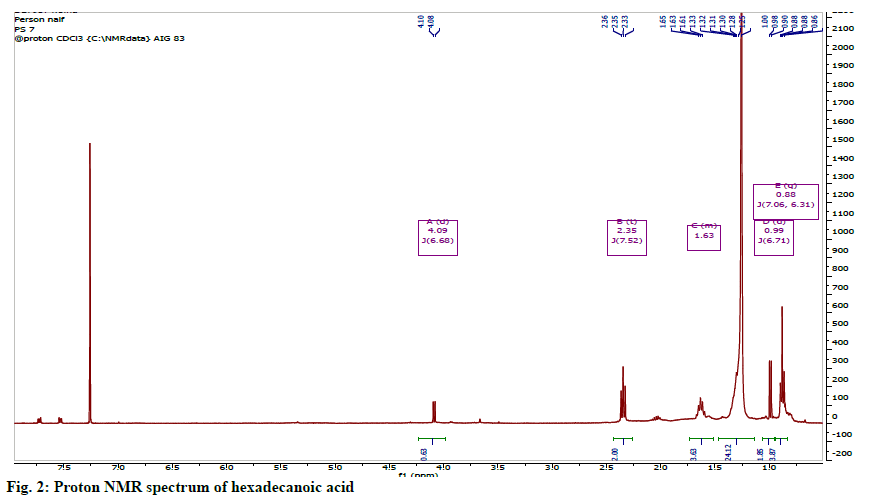 The 1H spectrum (fig. 3) was typical of a pentacyclic triterpene and similar to stigmasterol. It showed three multiplets; one at δH 5.18 (typical of an olefinic H-5 or H-7 observed for steroids) and two others at 5.35 and 5.04 for protons H-22 and H-23 respectively. The spectrum also showed two methyl doublets at 0.81 and 0.84 for an isopropyl unit in the steroid. Two other methyl groups were observed at 0.55 and 1.08 and were assigned to tertiary methyl groups at C-18 and C-19, while the rest of the methyl signals were assigned to C-21 and C-29. The 13C-NMR spectrum indicated resonances for twenty nine carbons including a carbonyl, six methyl, four olefinic and seven quaternary carbons. These signals and comparison with literature reports allowed for the identification of the steroid as spinasterol [28] (fig. 4). 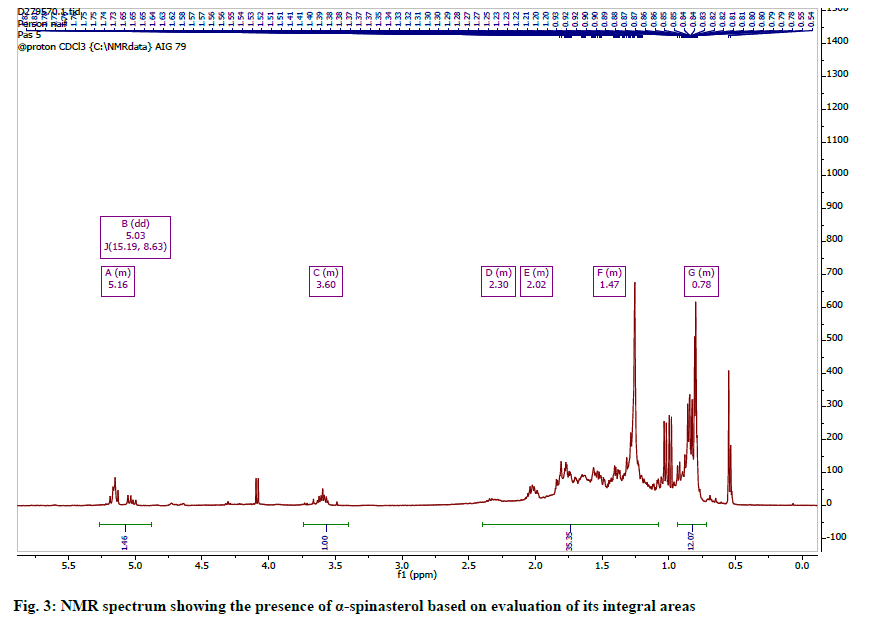 Fig. 3: NMR spectrum showing the presence of α-spinasterol based on evaluation of its integral areas 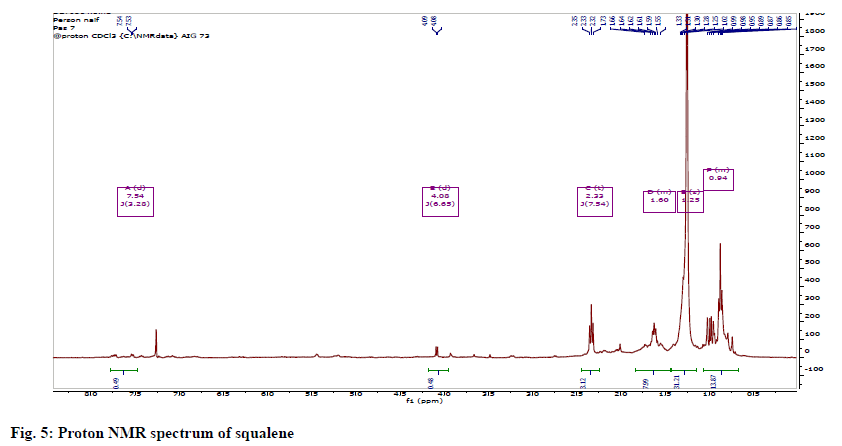 Extracts of root of Cucurbita pepo showed the presence of Alpha (α)-spinasterol which has been reported to have therapeutic effects. Studies conducted by Socała et al. [29,30] revealed significant anticonvulsant effect of α-spinasterol and reduced depressive-like behaviour in mice while the study carried out by Jeong et al. [31] on α-spinasterol isolated from the roots of Phytolacca americana suggest that α-spinasterol has a significant therapeutic potential to modulate the development and progression of diabetic nephropathy. Apart from reducing cell infiltration in the injured tissue, oral administration of α-spinasterol also reduces postoperative pain when administered before incision or after incision [32]. It also has anti-inflammatory activity in vivo and inhibits benign prostatic hyperplasia in rats [33,34].

Extracts of root of Cucurbita pepo also showed the presence of squalene, a terpene produced in plants which have been reported to have positive effects in the treatment of certain kinds of cancer. Examination of the seeds of Cucurbita pepo showed that it has high concentration of squalene [35]. The seeds oil of Cucurbita pepo is rich in phytosterols, fatty acids, squalene, tocopherols and other healthy components. These components make it as alternative medicine for management of men’s health problem and have beneficial effects on benign prostatic hyperplasia, overactive bladder and androgenic alopecia [36].

Extracts of root of Cucurbita pepo showed the presence of palmitic acid. Palmitic acid is a fatty acid that is found naturally in animals and plants which is widely used in a variety of applications including personal care products and cosmetics. The Cucurbita pepo seed oil has been shown to contain palmitic acid in addition to other fatty acids such as oleic, linoleic and stearic acids [37]. Studies carried out by Mulugeta et al. [38] and Bulama et al. [39] on palmitic acid isolated from root wood of Moringa stenopetala and Terminalia glaucescens respectively revealed that palmitic acid has antibacterial activity which justify the use of the plants in the treatment of different bacterial infections traditionally [40,41].

The present phytochemical investigation of root of Cucurbita pepo revealed the presence of hexadecanoic acid, α-spinasterol and squalene. This is an initial report of these compounds from the root of this plant material.