Betamethasone valerate and betamethasone dipropionate are synthetic glucocorticoids used widely for the treatment of dermatoses and other skin diseases in the dosage forms like cream, gel, ointment, solution and lotion [1,2]. These esters are sensitive to heat [3,4] and undergo degradation to a number of compounds having lower therapeutic activity as compared to that of the parent compounds [5]. The degradation of betamethasone and related corticosteroids has been the subject of many investigations in the form of solutions [6−9], solid state [6,10] and in various dosage forms [11−13]. The major degradation reactions encountered with these esters are oxidation [14−19] and ester group migration followed by hydrolysis [6−9,11−13,20−27]. These reactions are influenced by pH, solvent polarity, oxygen content and temperature [14−17,20−25].

Preparation of cream and gel formulations

The cream formulation was prepared by soaking carbomer−940 overnight in water. Betamethasone esters dissolved in a small quantity of isopropyl alcohol was mixed with a mixture of propylene glycol, cetostearyl alcohol and water and then mixed with the carbomer suspension in a silver sun mixer. The pH of the cream was adjusted to 4.0 with 1 M sodium hydroxide solution under gentle mixing. In the case of gel formulation the betamethasone esters solution in isopropyl alcohol and carbomer suspension in water were mixed thoroughly with a mixture of propylene glycol and water in a silver sun mixer. Diisopropanolamine was then added to the mixture under vigorous mixing. The pH of the gel was adjusted to 4.0 with 4 M hydrochloric acid solution.

All pH measurements were carried out with a WTW pH meter (Model 702, Sensitivity ±0.01 pH units, Germany). The electrode was standardized with buffer solutions (pH 2.0, 4.0 and 7.0) at 25º. For the determination of pH of the formulated products (cream/gel), 2 g sample was mixed thoroughly with 30 ml of double distilled water in a beaker and pH of the mixture was determined.

The HPLC analysis was carried out on a Shimadzu class−20 A HPLC (Kyoto, Japan) system that consisted of an LC−20AT pump, an SPD−M20A photodiode−array UV/Vis detector and an inbuilt CBM−20A lite communication bus module. Data collection and integration were achieved using Shimadzu LC solution computer software version 1.2 (Kyoto, Japan). All the separations were carried out isocratically on a stainless steel column (250×4.6 mm i.d.) packed with Lichrosorb RP−18 (particle size, 5 µm, Merck) provided with a C−18 guard column (10×4 mm i.d., particle size, 5 µm). A mixture of acetonitrile and water (60:40, v/v) was used as a mobile phase, at a flow rate of 1 ml/min at ambient temperature. The detection was made at 238 nm.

In order to study the degradation of the betamethasone esters in solutions [citrate−phosphate buffers (pH 2.5−7.5), phosphate buffer (pH 7.5), acetonitrile and methanol], stock solutions of the compounds were mixed with the desired solvent in pyrex glass bottles to obtain the required initial drug concentration. Zero time samples were taken immediately while the remainder of the reaction mixture was divided into equal aliquots and heated in an oven (Memmert UIM 500, Germany) maintained at 40±1º for pre−determined time intervals. After heating, the samples were removed and the reaction was immediately terminated by adding 1 M HCl or 1 M NaOH solution to adjust the pH of the samples to approximately 4.0 and diluted further for HPLC analysis.

In the case of the cream or gel formulation the samples were spreaded as a 2 mm thick layer in Petri dishes and then degraded for pre−determined time intervals. The effect of pH on degradation was studied by preparing solutions of the compounds in citrate−phosphate buffers at pH 2.5−7.5. The thermal degradation in solution was also carried out in the presence of different concentrations of phosphate buffer.

The assay of betamethasone esters was carried out by the HPLC method described under the heading “chromatographic purity” in United State Pharmacopoeia [4]. The method was validated in respect to specificity, linearity, precision and accuracy. The same method was used for the assay of the degradation products of these esters. For the assay of all these compounds an appropriate volume of the solution sample was initially mixed with the internal standard solution (beclomethasone dipropionate in acetonitrile) and further diluted with the mobile phase to make the final concentration of 50 µg/ ml, filtered through 0.45 µm filter paper and then injected to the liquid chromatograph for analysis. The concentrations of the esters and their degradation products were read from the calibration curves obtained with the reference standards. In the case of cream and gel formulation the whole content of the Petri dish was dissolved in acetonitrile, filtered through 0.45 µm filter paper and then mixed with the mobile phase after the addition of internal standard prior to injection into the liquid chromatograph. 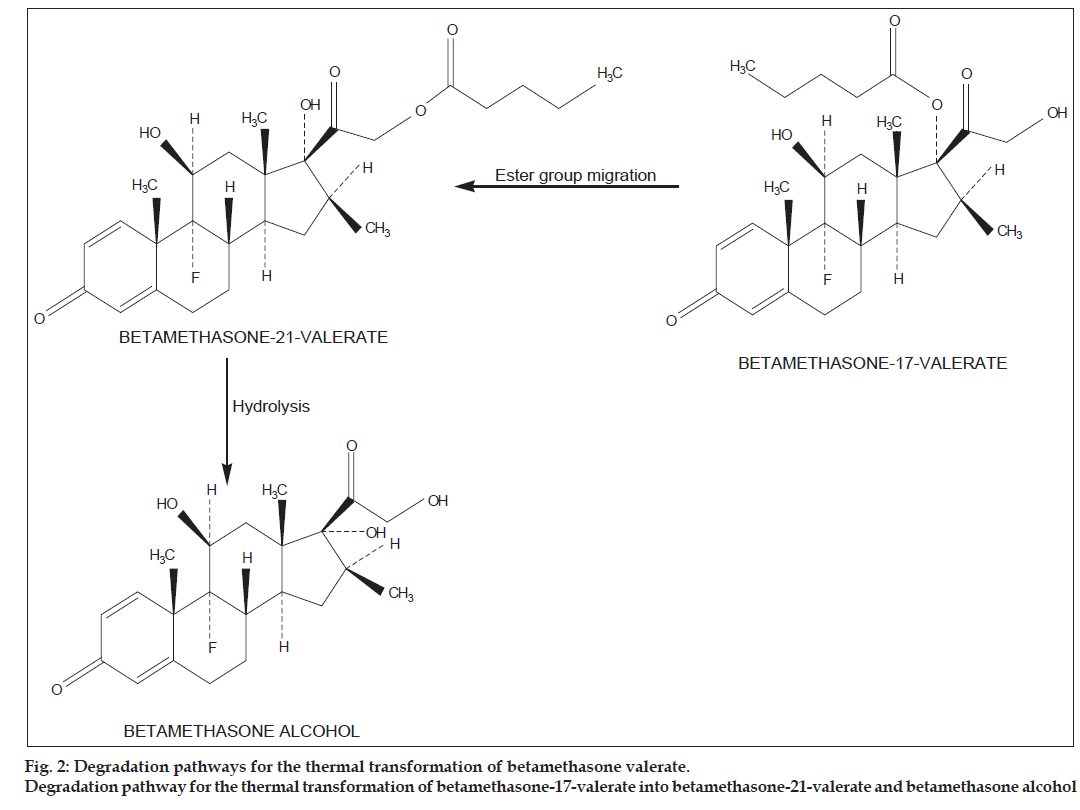 Table 2: Assay Of Betamethasone-17-Valerate On Degradation In Different Media

Table 3: Assay Of Betamethasone Dipropionate On Degradation In Different Media

The very slow rate around pH 4.5 appears to be due to the solvent catalytic effect, that is, the un−ionized water−catalyzed reaction of the molecule. The rate law for the acid−base catalyzed reaction may be written as: kobs = ko + k1 [H+] + k2 [OH–].

At low pH the term k1 [H+] is greater and specific hydrogen ion catalysis is observed. Similarly, at high pH, the concentration of [OH–] is greater and specific hydroxyl ion catalysis is observed. This explains the V−shaped pH−rate profile for the thermal degradation of betamethasone dipropionate. The pH−rate profile for the thermal degradation of betamethasone valerate (fig. 4b) represents ester hydrolysis over the pH range 2.5−7.5 and probably involves an intermediate in the reaction as observed in the case of the hydrolysis of hydrochlorothiazide [28]. The profile indicates an increase in the rate in the pH range 2.5−3.5 due to H+ ion catalysis. This is followed by a relatively pH independent region extending over the pH range of 3.5−4.5. On increasing the pH there is a gradual increase in the rate above pH 4.5. This appears to be due to the water/hydroxyl ion−catalyzed hydrolysis of the molecule in the neutral and alkaline region. The hydrolysis of betamethasone valerate represents V−shaped curve and is a case of specific acid−base catalyzed degradation.

In the present study degradation of betamethasone esters has been carried out in different media, i.e. methanol, acetonitrile, phosphate buffer (pH 7.5), cream and gel formulations. The treatment of the assay data Tables 1 and 2 of degraded betamethasone esters in different media shows that the reaction follows first−order kinetics. The values of the rate constants (kobs) are reported in Table 5. The correlation coefficients for the rate constants lie in the range of 0.998−0.999. It appears that degradation generally decreases in the order of the medium as: Organic solvents > phosphate buffer > cream > gel.

In order to observe the role of solvent on the rate of degradation of betamethasone valerate and betamethasone dipropionate, plots of kobs versus the solvent dielectric constant were prepared (fig. 5). It was found that the rate of degradation is increased with a decrease in the solvent dielectric constant suggesting the presence of a non−polar intermediate in the reaction, which controls the rate of reaction. 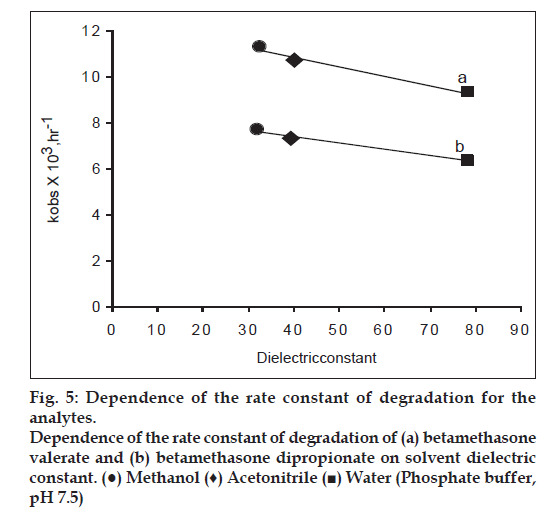 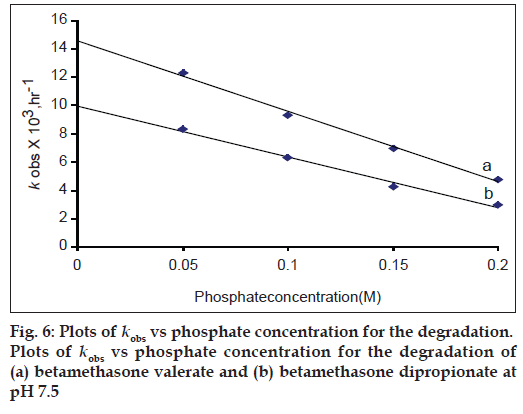 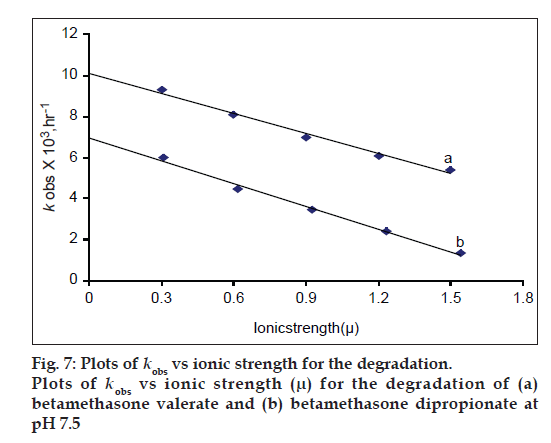 The authors are grateful to M/s. Glaxo SmithKline Pakistan (Pvt) Ltd., Pakistan and M/s. Crystal Pharma, Malaysia for the donation of betamethasone valerate, betamethasone dipropionate and their degradation products. They are also thankful to Dr. Muhammad Ashraf for valuable suggestions and M/s. Nabi Qasim (Pvt) Ltd, Karchi, Pakistan for providing technical facilities to carry out this work.