Liquisolid Technique: An Approach to Enhance the Dissolution Rate of Olanzapine

The present work was aimed at enhancing the dissolution rate of olanzapine, an antipsychotic agent using the liquisolid technique. Liquisolid system is an innovative technique used for enhancing dissolution rate and bioavailability of poorly soluble drugs. A mathematical model was utilized to formulate liquisolid tablets. Two non-volatile liquids were used in the design of liquisolid tablets, Tween 80 and propylene glycol. The effect of formulation parameters, such as drug:non-volatile liquid ratio and carrier:coating ratio were observed. Microcrystalline cellulose and silica were used as carrier and coating materials, respectively. All liquisolid formulations showed higher drug dissolution rate than directly compressible tablets and marketed tablets. Differential scanning calorimetry revealed that the drug has got solubilised in the liquid vehicle which was further supported by x-ray diffraction studies and scanning electron microscopy. Infrared spectroscopy studies indicated the absence of incompatibility between drug and non-volatile solvents. This study shows that liquisolid technique is a promising alternative for improvement of dissolution rate of water insoluble drug.

Bioavailability of a drug depends on its solubility in gastrointestinal fluids and its permeation across biological membranes. For a drug to be absorbed it must be in solution. So, solubility is the most important parameter for orally administered drugs. The improvement of drug solubility remains one of the most challenging aspects of drug development process. About 40 % of the newly developed drugs are insoluble in water [1]. Numerous conventional and modern approaches like solid dispersions, use of surfactants, inclusion complexes and nanonization are used to improve the solubility of these drugs. Liquisolid technique is one of the most promising approaches for solubility enhancement of poorly soluble drugs.

Olanzapine (OLZ), 2-methyl-4-(4-methyl-1- piperazinyl)-10H-thieno(2,3b)(1,5) benzodiazepine is the most important atypical antipsychotic agent. OLZ belongs to class II of Biopharmaceutical Classification System and has low bioavailability due to its poor solubility in water [4]. Several solubilisation techniques like solid dispersions [5] and inclusion complexes [6] have been applied and reported to enhance the aqueous solubility of OLZ. The present work was aimed at enhancing the dissolution rate of OLZ by development of liquisolid tablets. Effect of three factors namely non-volatile solvent, drug:non-volatile solvent ratio, carrier:coating ratio were observed in this study.

Application of mathematical model for design of liquisolid tablets

To calculate the required amounts of carrier and coating materials, a mathematical approach for the formulation of liquisolid systems has been developed by Spireas and Sadu [7]. This approach is based on flowable and compressible liquid retention potential introducing constants for each powder-liquid combination. The Φ-value of a powder represents the maximum amount of a given liquid that can be retained inside its bulk while maintaining its acceptable flowability.

Depending on the excipients ratio (R) of the powder substrate, an acceptable flowing and compressible liquid-solid system can be obtained only if a maximum liquid load on the carrier material is not exceeded. This liquid:carrier ratio is termed ‘liquid-load factor Lf’(w/w) and is defined as the weight ratio of the liquid formulation (W) and the carrier material (Q) in the system, Lf=W/Q. R represents the ratio between the weights of the carrier (Q) and the coating (q) material present in the formulation, R=Q/q. The liquid-load factor that ensures acceptable flowability Φ(Lf) can be determined using the eqn., ΦLf = Φ+φ (1/R), where Φ and φ are the Φ-values of the carrier and coating material, respectively.

Since selection of non-volatile solvent is an important factor in the formulation of liquisolid tablets, solubility studies were carried out to determine the solubility of OLZ in different non-volatile solvents. The solubility of OLZ was determined in Tween 80, PG and PEG 400 and in distilled water. Ten millilitres of respective solvents were taken in conical flasks and excess amount of OLZ was added and shaken for 48 h at 27° using a rotary shaker (Sisco, India) [9]. The solutions were subjected to centrifugation, supernatants were suitably diluted with 0.1 N HCl and analysed spectrophotometrically using UV/Vis spectrophotometer (Elico, SL 159) at 259 nm for OLZ content [10].

Twelve formulations of liquisolid tablets were prepared by direct compression method and the composition of the tablets is shown in Table 1. The desired quantity of drug was added to preheated non-volatile solvent (Tween 80/PG) with constant stirring and the solution was mixed thoroughly until a homogenous drug solution was obtained. The resultant liquid medication was converted into a free flowing powder mixture by blending with required quantities of carrier (Avicel PH 102) and coating materials (Aerosil 200) using a standard mixing process that was described by Spireas [11]. Lastly starch (5 % w/w) was added to the powder mixture and thoroughly mixed. The final powder blend was compressed into tablets using rotary tablet machine (Shakti). For comparison, tablet formulation (DCT) was prepared without using any non-volatile solvent. Fifty tablets were prepared for each formulation.

The flowability of the powder blends was assessed by determining angle of repose, bulk density, tapped density, Carr’s Index, and Hausner ratio parameters [12]. The hardness [13], uniformity of weight and friability [14] were determined for prepared liquisolid tablets. Five tablets were weighed individually and powdered. The powder equivalent to 5 mg of OLZ was dissolved in 10 ml of 0.1 N HCl and filtered. The drug content was determined by measuring the absorbance at 259 nm after suitable dilution [15].

The in vitro release of OLZ from the formulated tablets was carried out using 900 ml of water maintained at 37.0±0.5° with a stirring rate of 50 rpm using rotating paddle tablet dissolution apparatus (USP- LabIndia DS 8000). At regular time intervals, samples of 5 ml were withdrawn and replaced with fresh medium to maintain the volume constant. After filtration and appropriate dilution, the amount of OLZ present in each sample was determined spectrophotometrically at 259 nm and cumulative percent drug release was calculated. To compare the dissolution profiles of formulated products with a marketed tablet, dissolution of Oleanz 10 (Sun Pharma Laboratories Ltd.) was carried out. To compare the dissolution data, dissolution efficiency at 30 min (DE30) was calculated for all the formulations.

DSC analysis was performed using a Hitachi, STA-7300 DSC Germany, in order to assess the thermal behaviour of pure OLZ and liquisolid compacts. About 5-10 mg of the sample was sealed in the aluminium pans and heated at the rate of 10°/min, covering a temperature range of 50° to 250° under inert atmosphere flushed with nitrogen.

The XRD patterns of OLZ and liquisolid formulations T250 and P250 were recorded on PanAlytical, X-Pert pro X-ray diffractometer, Netherlands, using Cu as anode material and Kalpha1 radiation of 1.54060 A°. The data were recorded over a scanning range of °2 θ of 10 to 90.

The surface characteristics of pure drug and optimized formulations of T250 and P250 were investigated using the scanning electron microscope (JSM-6610LV, Jeol Asia Pte. Ltd., Japan). The sample was placed on a clear glass stub and sputter coated with a thin layer of gold using a vacuum evaporator. Images were examined at 20 kV accelerating voltage.

The liquid vehicles used in liquisolid systems should be orally safe, inert, and not highly viscous and preferably water miscible non-volatile organic solvents. In the current work, four liquid vehicles were chosen for solubility studies. All the liquid vehicles chosen for solubility studies are not highly viscous which is evident from the reported viscosities at 25° (90 mPa s for PEG 400, 58.1 mPa s for PG, 425 mPa s for Tween 80). The liquid vehicles are soluble in water and have high boiling points (>100°). The solubility of OLZ in different solvents was presented in Table 2. OLZ, which belongs to class II of BCS, is practically insoluble in water and its reported water solubility values are 0.03988 mg/ml [16], 0.043 mg/ml and 0.0942 mg/ml [17]. The solubility of OLZ in water was found to be 0.044 mg/ml which is in accordance to the literature cited and the drug showed enhanced solubility in non-volatile solvents. The solubility of OLZ was highest in PG followed by Tween 80 and PEG 400. The solubility of a drug in the solvents is affected by different physicochemical properties of the solvents, such as hydrophilicity, polarity, viscosity, chemical structure and molecular weight [18]. Even though Tween 80 has high hydrophilicity due to its high hydrophile-lipophile balance value of 15 compared with other liquid vehicles used, it had the lower solubilisation effect than PG. This may be due to other physicochemical properties such as high viscosity (425 mPas), high molecular weight (1310 g/mol) and extremely branched chemical structure [19]. Thus, Tween 80 and PG were chosen to develop liquisolid tablets. Higher drug solubility in the liquid vehicle results in reduced requirement of carrier and coating materials.

Table 2: Solubility studies of olanzapine at 27°

In the formulation of liquisolid tablets, the liquid vehicle itself acts as a binder. The compactness of liquisolid tablets is due to the presence of hydroxyl groups in the molecular structure of liquid vehicle, which leads to hydrogen bonding between solvent and other excipients in the formulations [21]. High specific surface area (SSA) and high liquid absorption capacity are the important criteria for selection of a carrier in a liquisolid system. MCC PH 102 was used as a carrier because it has a large SSA of 1.18 m2/g when compared to other general carriers, like lactose (0.35 m2/g), sorbitol (0.37 m2/g), and starch (0.6 m2/g) [22]. Fluid penetration into a porous material is a capillary driven flow. The penetration rate of a liquid into a porous material is based on the balance between capillary and opposing viscous forces as given by the Eqn., L2 = 2mγcosθt/kη, where, L is the penetrating length at time t, m is the pore size, γ is the surface tension of the liquid, θ is the contact angle between the liquid and solid, η is the viscosity of the liquid and k is a constant that depends on the pore shape [23]. The small pore size restricts the entry of liquid vehicle with large molecular weight and extremely branching structure. A high surface tension between porous particles and liquid vehicle leads to a high contact angle, which maximises the diffused amount of liquid vehicle. Avicel PH 102 has a pore size of 100 μm. All the liquisolid powders were compressed into tablets. 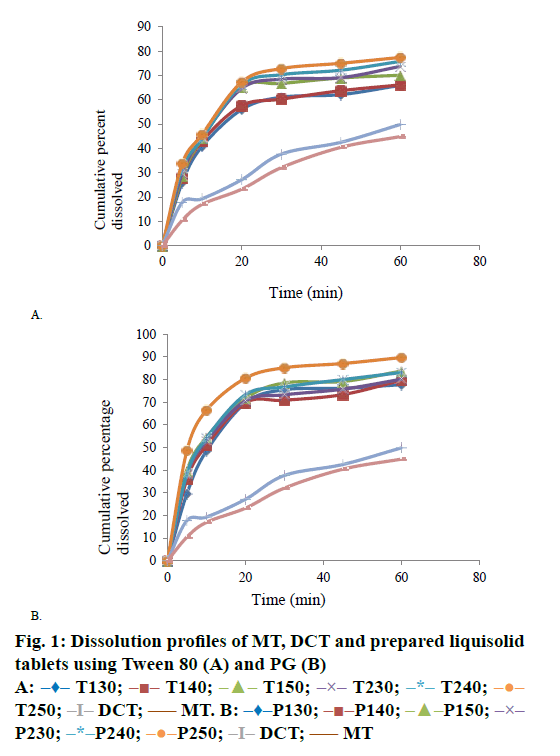 Figure 1: Dissolution profiles of MT, DCT and prepared liquisolid tablets using Tween 80 (A) and PG (B)
A: 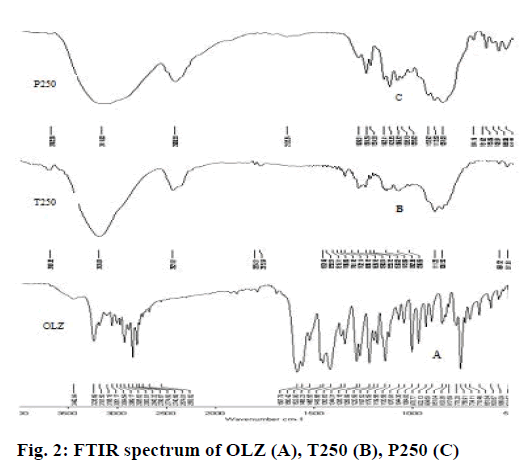 In the DSC curve (Figure 3A), pure OLZ has a sharp endothermic peak at 194.25°, which correspond to the melting point of OLZ [29]. The thermal behaviour of liquisolid systems (Figure 3B and C) show the shifting of endothermic peak to lower temperatures, which clearly indicates that crystalline nature of drug is completely lost [30]. 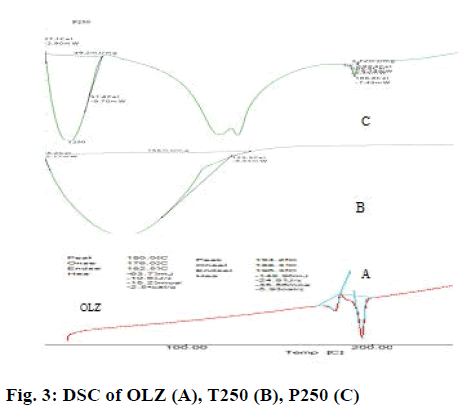 Changes in the physical form of the drug particles are important since they affect the dissolution rate and bioavailability. Hence, this aspect of OLZ in liquisolid compacts was studied. The XRD of OLZ in Figure 4A shows the presence of sharp intense peaks indicative of its high crystalline character [31]. XRD patterns of liquisolid powders (Figure 4B and C) showed the reduction in intensity of these distinct peaks, which reveals that OLZ has been completely converted to solubilised form as observed in the earlier results [32]. The SEM photomicrograph, in Figure 5A, showed the presence of irregular shaped crystals of OLZ. The photomicrographs of T250 and P250 (Figures 5B and C) signify the complete disappearance of crystals of OLZ, which indicates that the drug was totally solubilised in the liquid vehicles [33].