Different types of in situ gelling systems of indomethacin, in sodium alginate vehicle, were prepared and evaluated for their pharmaceutical properties including viscosity, sterility and drug content uniformity. The gelling efficacy of the prepared systems was evaluated by using an in house fabricated gelation cell. The in vitro release kinetics of the prepared systems was determined in simulated tear. The gelling time and the nature of the gel formed were dependent on the concentration of sodium alginate present in the systems. The drug release from these systems was extended up to 8 h and predominately followed zero-order kinetics.

Absorption of drugs into the eye requires good pre-corneal penetration and prolonged contact time with corneal tissues. Ideally, the formulation should be able to sustain drug Ideally, the formulation should be able to sustain drug release and to maintain contact with the eye for extended periods of time. The extent of absorption into the eye is severely limited by the physiological constraints such as reflex tearing and blinking [1]. Further, drug loss occurs due to tear turnover, solution drainage by gravity and binding of drugs to proteins and other components of tear. As a result, typically only 1-2% of the instilled drug is bioavailable [2]. To overcome these problems certain novel approaches have been investigated [3-10]. The solid ocular inserts have overcome the problems of low bioavailability, but still are not popular because of foreign body sensation and high cost and are generally not considered friendly for users.

The concept of in situ forming gels came into existence in the early 80s [11] and such systems have been investigated using phase-transition polymers [12-16]. Sodium alginate has been used extensively to form polymeric dispersions in buffers that typically show low viscosity up to pH 5 and coacervate in contact with tear and thus form gels [17]. In the present study an in situ gelling preparation of indomethacin in sodium alginate has been investigated, which holds promise as a more patient acceptable dosage form.

Indomethacin was generously gifted by Jagsonpal Ltd.,New Delhi and sodium alginate was obtained commercially (Thomas Baker Chemicals Ltd., Mumbai) and all other chemicals and reagents used were of analytical grade.

Preparation of the in situ gelling system:

Indomethacin (passed through BSS # 200) dispersion (1%w/v) was prepared in sterile 0.05 M acetate buffer (pH 5.0) and in sterile phosphate buffer (pH 7.4) made isotonic with saline. Alginate, at solution concentrations of 0.5-2% w/v, was prepared in the same buffer and sterilized by autoclaving. The two liquids were combined and stirred for 7 h under aseptic conditions to obtain a uniform dispersion (Table 1). The preparations were filled into presterilized amber colored neutral glass vials, which were stoppered with presterilized LDPE, sealed and refrigerated (4-8°) until usage.

Table 1: Compositions And In Vitro Characterization Of Prepared In Situ Forming Gels Of Indomethacin

The vials containing the preparations were shaken for a few minutes and 100 μl of the preparations were transferred to 25 ml volumetric flasks with a micro-pipette. Phosphate buffer (pH 7.4) was added in small portions (5 ml), shaken to dissolve the contents, volume was adjusted to 25 ml, and the solutions were assayed for indomethacin content at 319.5 nm (Shimadzu-1601, Japan), using the contents of at least 6 vials.

The viscosities of the various batches of alginate based systems was studied on a cone (0.8°) and plate Brookefield viscometer using spindle cp 40 thermostated at a temperature of 35±1°. A typical run comprised of changing the angular velocity from 0.5 to 100 rpm at a controlled ramp speed. After 0.1 min at 0.5 rpm, the velocities were increased to 100 at the same controlled ramp speed with 0.1 min hold time at each rpm value. The hierarchy of the angular velocity was reversed at the same ramp speed with a similar hold time of 0.1 min. The average of the two readings was used to calculate the viscosity.

The gelation studies were conducted in gelation cells,fabricated locally using Teflon®. The cylindrical cells were capable of holding 3 ml of the gelation solution (simulated tear of composition 1 and 2, henceforth STC1 and STC2) [18]. STC1 contains sodium chloride 0.67 g, sodium bicarbonate 0.20 g, calcium chloride dihydrate 0.008 g and distilled water q.s. to 100 ml, while STC2 contains bovine serum albumin (fraction V) 0.268 g, lysozyme 0.268 g, δ-globulin 0.134 g, D-glucose 0.650 g,sodium chloride 0.650 g, calcium chloride dihydrate 0.008 and distilled water q. s. to 100 ml. Within the cell located at the bottom was a 250 μl transparent cup to hold the gel sample in place after its formation. An aliquot of the alginate-indomethacin preparation (100 μl) was carefully placed in the cavity of the cup using a micropipette, and 2 ml of the respective gelation solution was slowly ovulated on the test preparation. Gelation was determined by visual inspection, and graded as slow gelation (+), immediate gelation which remains for a 2-3 h (++) and immediate stiff gelation, which remains for extended period of time (+++). Sterility test was performed using the Alternate Thioglycollate Medium (USP XXIII).

The drug release kinetics of the prepared formulations was studied using a modified method reported earlier [19].

The test preparation (2 ml) was placed in a circular Teflon® cup (2.5 cm i.d. × 1.2 cm depth). This was in turn placed on an inverted USP basket kept inside a 250 ml beaker. Dissolution medium (200 ml of simulated tear of composition 1) was placed in the beaker and stirred with a star-headed magnetic bead at 60 rpm. Temperature of 37±0.50 was maintained throughout the study. Dissolution samples (5 ml) were withdrawn as a function of time, and the withdrawn volume was replaced with pre-warmed buffer. The indomethacin content in the dissolution samples was determined as described earlier.

The results (Table 1) indicated that the indomethacin contents in the formulations were within the limits of 100±5 %. Sterility tests showed that all the samples were sterile. Viscosities of the fabricated in situ gel forming systems were determined before and after sterilization. The results showed 31-50% reduction in the viscosities after sterilization by autoclaving. The percentage reduction in the viscosities of the batches prepared in acetate buffer (pH 5.0) was more than the batches prepared in phosphate buffer (pH 7.4) (pH of tear), thus indicating the tendency of sodium alginate to coacervate at physiological pH17

On visual inspection, the alginate eye drops showed the formation of a translucent matrix on addition to the gelation medium of composition 1, while the resultant matrix had an opaque appearance in the medium of composition 2. The difference in appearance of the two matrices suggested that gelation proceeds by two different mechanisms. In the former, presumably gelation was due to ionic cross- linking of the alginate chains by the divalent cation, forming the egg box model [20]. In STC2, in addition to the cross linking by the divalent cation, the alginate could have complexed with the proteins in the medium to form a polyelectrolyte complex, which precipitates out of the solution. Formation of such complexes is well known especially for the alginate-poly (L- lysine) complex [21]. These complexes have shown physical properties different from the calcium cross-linked matrices, such as stability in aqueous solutions and permeability to various molecules. In general, matrices based on these poly-electrolyte complexes are less sensitive to dilution or ion- exchange reactions and maintain their structure under physiological condition [22].


At relatively lower polymer concentrations, the rates of gelation were low, hence not suitable for ophthalmic formulations, as they might be removed from the cul-desac by the tear and blinking before gelation occurs. The formation of a strong gel is contingent on a short gelation time of the delivery system upon instillation into the eye, and polymer concentrations of 1.5-2% fulfill this criterion. Thus, such vehicles will not be susceptible to drainage from the eye as seen in the case of ophthalmic solutions, and will have a longer residence time.

The gelling systems were prepared using both acetate buffer (pH 5.0) and phosphate buffer (pH 7.4) in order to examine the effect of pH on the release properties of the drug from the corresponding batches, as sodium alginate is a well known vehicle with a low viscosity up to pH 5.0 and coacervation occurs at pH 7-7.4.

The release profiles of the concerned batches are shown in figs. 1 and 2. The release from these batches followed zero-order kinetics predominantly, with the exception of batches A5 and P3 which followed Higuchi type release kinetics, as evidenced by the r2 values shown in Table 2. Indomethacin release from the batches with lower polymer concentrations (batches A1 and P1) was higher than those with higher polymer concentrations (batches A5 and P5) containing 2% (w/v) of sodium alginate. This was presumably due to their higher extent of gelation in the simulated tear. Moreover, batches Aunderwent slow gelation showed an initial high burst release of more than 20% of the loaded drug within 1 h, while the fast gelling matrices did not show any burst release. It is expected that the dissolution of the gels sin cul-de-sac will proceed more slowly than that seen in the in vitro experiments due to low resident volume of the lacrimal fluid in the human eye, being 7.5-10 μl [23]. Consequently, the in vivo drug release from these systems could occur primarily by diffusion over a long duration of time, at least similar to, if not greater, than that seen in the in vitro experiments. Thus, in our opinion, the presence of the released drug in the precorneal region for long periods of time will significantly enhance the bioavailability of the drug. 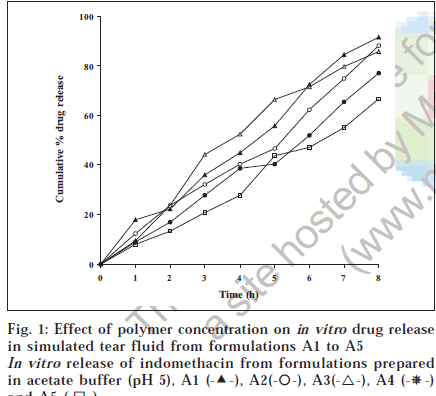 Fig. 1: Effect of polymer concentration on in vitro drug release in simulated tear fluid from formulations A1 to A5 In vitro release of indomethacin from formulations prepared in acetate buffer (pH 5), A1 (-▲-), A2(-○-), A3(-△-), A4 (- 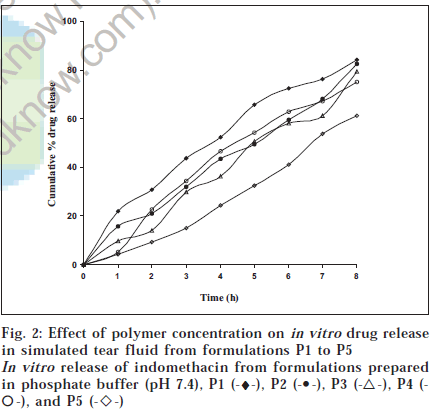 Table 2: Kinetic Parameters Of In Vitro Release Of Indomethacin

Several possible rate determining steps for drug release from gelling matrices can be operative. These are: gelation of alginate upon interaction with tear Ca2+ and rate and extent of gelation, permeation of tear into the gel, the dissolution of drug in the permeating tear, diffusion of drug through the gel and surface erosion of the gel. Once the alginate has formed a gel with tear Ca2+, further penetration of tear into the gel would be decreased with increase in alginate content in the product, and consequently retardation in drug release will occur. In this study the systems were formulated in aqueous vehicle, and the matrix found on gelation was already hydrated. Hence, tear permeation into the gel as well as diffusion of drug through the gel and its surface erosion would depend upon the stiffness of the gel to a large extent. The two main prerequisites of a gelling system are viscosity and gelling capacity (speed and extent of gelation). The formulation should have an optimum viscosity to allow easy instillation as drops, which will then undergo rapid sol to gel transition due to ionic interactions. Also, the in situ formed gel should preserve its integrity without dissolving or eroding for a prolonged period of time. The formulations exhibited pseudoplastic rheology, as evidenced by shear thinning and an increase in the shear stress with angular velocity. At relatively lower polymer concentrations the rate of gelation was low; generally 2-3 minutes were needed to obtain a visible gel. Such vehicles are not suitable for prolonged retention as they might be removed speedily from the cul-de-sac by tear turn over and blinking before gelation occurs. The formulation of a strong gel is favoured at alginate concentrations of 1.5 and 2%, and will be susceptible to drainage from the eye as seen in the case of ophthalmic solutions.

In addition to the ionotropic gelling of alginate, its mucoadhesivity is also likely to contribute to enhancement of retention time. Although zero-order drug release from alginate gel systems is not expected, our findings point to the possibility of this type of drug release. Apparently in cases where the gel, once formed, attaches itself to the ocular tissues, and remains so for extended periods of time, the slow erosion of the alginate gel provides for a constant diffusional path length, with resultant zero-order release characteristics.