Microemulsion as a vehicle for transdermal permeation of nimesulide

Topical microemulsions of nimesulide, a poorly water-soluble nonsteroidal antiinflammatory drug, using olive oil as oil phase and Tween 80/iso-octanol as surfactant/co-surfactant were designed. Various concentrations of surfactant: co-surfactant (2:1, 3:1, 4:1) were used in constructing a pseudoternary phase diagram. Oil-in-water microemulsions with ratio 15/35/50 (o/w/s) was chosen for the present study after evaluating various parameters like centrifugation, viscosity and stability. Using 4:1 ratio of surfactant : co-surfactant, a microemulsion-based gel of nimesulide was prepared with 1% Carbopol 934. In vitro permeation study of the gel was carried out through excised hairless rat skin and compared with a marketed preparation. The drug release after 24 h from the prepared microemulsion gel and marketed formulation was found to be 72% and 81% respectively. No significant difference was observed between the release rates of nimesulide from both formulations despite their differences in alcohol content. Microemulsion-based gel of poorly water-soluble nimesulide was successfully developed with in vitro release rates comparable to that of the marketed gel formulation.

Microemulsions are thermodynamically stable isotropic systems in which two immiscible liquids (i.e., water and oil) are mixed to form a single phase by means of an appropriate surfactant or its mixture. These are homogenous systems of low viscosity that can be prepared over a wide range of surfactant concentrations and oil-to-water ratios. Hoar and Schulman introduced the word microemulsion (ME), which they defined as a transparent solution obtained by titrating a normal coarse emulsion with medium-chain alcohols [1]. The short-to medium-chain alcohols are generally considered as co-surfactants in the ME system. The presence of surfactant and co-surfactant in the system makes the interfacial tension very low. Therefore, the microemulsion is thermodynamically stable and forms spontaneously, with an average droplet diameter of 10 to 140 nm2. At low surfactant concentration, there is a sequence of equilibria between phases, commonly referred to as Winsor phases; they are Winsor I -with two phases, the lower (oil/water, o/w) ME phase in equilibrium with the upper excess oil; Winsor II -with two phases, the upper ME phase (water/ oil, w/o) in equilibrium with excess water; Winsor III with three phases, middle ME phase (o/w plus w/o, called bicontinuous) in equilibrium with upper excess oil and lower excess water; Winsor IV -in single phase, with oil, water and surfactant homogeneously mixed. Inter conversion among the above-mentioned phases can be achieved by adjusting proportions of the constituents [3]

Advantages of ME over coarse emulsion include its ease of preparation due to spontaneous formation, thermodynamic stability, transparent and elegant appearance, increased drug loading, enhanced penetration through the biological membranes, increased bioavailability and less inter- and intra-individual variability in drug pharmacokinetics [4]. Recently, MEs were reviewed for several applications, such as topical use, oral use, parenteral use and cosmetics. These advantages make MEs one of the attractive drug delivery systems [5]. Concerning dermal application, MEs increase the transdermal permeation of drugs by interacting with stratum corneum and changing the structural rearrangement of its lipid layers, thereby acting as a penetration enhancer [6]. Microemulsions have the ability to deliver larger amounts of water and topically applied agents into the skin than water alone or other traditional vehicles, because they act as a better reservoir for a poorly soluble drug through their capacity for enhanced solubilization [7,8].

Nimesulide (NM) is N-(4-nitro-2-phenoxyphenyl) methane sulphonamide. The oral use of NM is associated with side effects like gastrointestinal disturbances, epigastric pain, nausea, heartburn, diarrhoea and vomiting. Topical application of the drug prevents these side effects and offers potential advantage of delivering the drug at the site of action [9].

Nimesulide was obtained as a gift sample from Sun Pharmaceuticals, Ahmedabad, India. Olive oil, iso-octanol and Tween 80 were purchased from Himedia Chemicals, Nashik, India. Double distilled water was used throughout the study. Solvents and all reagents were of analytical grade.

Construction of pseudoternary phase diagram for preparation of MEs

Olive oil and iso-octanol were selected as oil component and co-surfactant respectively, in the ME systems. Tween 80 was used as surfactant. Olive oil and iso-octanol were added to the surfactant. The pseudoternary phase diagrams of oil, surfactant/co-surfactant and water were set up using the water titration method. The mixture of oil and surfactant/co-surfactant at predetermined weight ratios was diluted with water by sequential addition of 10 μl of water using a micropipette. The system was stirred using a magnetic stirrer to ensure thorough mixing. After each mixing, the sample was allowed to settle, and its physical condition (clarity and flowability) was reviewed. The sample was sonicated for 1 to 2 min to remove air bubbles and to enable a better visual examination. Mixtures that did not show a change in the meniscus after tilting to an angle of 90º were considered to be gels. Samples were examined under a microscope.

Accurately weighed 10 mg of NM was dissolved in 0.1 N NaOH and the volume was made up to 100 ml in a volumetric flask to give 0.1 mg/ml solution (stock solution). Aliquots of 0.2, 0.4, 0.6, 0.8, 1.0, 1.2 and 1.4 ml of the above solution were further diluted to 10 ml with 0.1 N NaOH. The absorbance of these solutions was measured at 391.4 nm using UV-VIS spectrophotometer (Shimadzu UV- 2501PC, Shimadzu Corporation, Japan) against respective blank solutions. The calibration curve was performed in triplicate.

ME systems were subjected to centrifugation (Research Centrifuge- Remi Instruments, Mumbai) at 1250 xg for a period of 5 h and then examined for any phase separation. Viscosity measurements were carried out by using Brookfield Digital Rheometer (Model DV-III, Brookfield Engineering Laboratories, USA) at different shear rates. Various compositions were chosen from the pseudoternary phase diagram based on their clarity and flowability [10].

Stability studies of the prepared MEs were carried out by keeping the samples in stability chambers (Shanti Engineering India Pvt. Ltd., India) at a temperature of 45° and 75% relative humidity for a period of 6 mo.

For gelling of the o/w type of ME, Carbopol 934 was used. Weighed quantity (1%) of carbopol was soaked in the ME system, stirred to disperse carbopol in the MEand left overnight for gelling.

The release profiles of NM from both ME gel formulation and marketed formulation were generated from the percentage of NM released into the receptor chamber of the Franz diffusion apparatus at each sampling time point. The test formulation (ME gel) at an equivalent amount of NM approximately 5 mg, was placed on the excised hairless rat skin in the donor chamber of the Franz diffusion cell. The receptor medium used was 0.1 N NaOH. The temperature of the receptor medium was maintained at 37.5 ± 0.2° throughout the experiment. Samples were taken at 1, 4, 8, 12, 16, 20, 24 h and the absorbances were determined using UV-VIS spectrophotometer for the content of NM in the receptor medium at each time point.

A pseudoternary phase diagram was constructed to determine the composition of an aqueous phase, an oil phase and a surfactant : co-surfactant (2:1, 3:1, 4:1) phase that will yield a ME (transparent solution) at 298°K, which is represented in fig. 1. The diagrams plotted for the three ratios were of similar type; the demarcation boundary curves between the homogeneous and heterogeneous zones were on the whole symmetrical. The region above the curve is the ME region. The area of ME region was found to be in the order 4:1>3:1>2:1. ME preparation requires adjusting the HLB (hydrophilic lipophilic balance) value of the formulation by including a co-surfactant, which makes the polar solvent less hydrophilic. For simplicity, the microemulsion is assumed to be a three-component system (oil, water and the mixture of surfactant and co-surfactant). Any combination Publicationsof the three components can be plotted as a percent on a pseudoternary phase diagram. Pseudoternary phase diagrams were constructed and the corresponding microemulsion regions were identified as shown in fig 1. No significant results were obtained using co-surfactant isopropyl alcohol and 1-butanol. The results indicated that the area of the microemulsion region increased slightly by changing the ratio of surfactant/co-surfactant from 2:1 to 4:1. Due to the low water-solubility of NM and the rigidity of oily surface, some amount of alcohol was added to dissolve the drug and increase the curvature of the oil layer. The alcohol incorporated into the microemulsion system not only reduces the interfacial tension between the oil phase and the aqueous phase but also makes the lipophilic drug soluble in the system. However, alcohol evaporates easily; therefore, formulations containing alcohol may destabilize if their packages are not tightly closed. According to the pseudoternary phase diagrams shown in fig. 1, the w/o microemulsion systems of NM were obtained at oil concentrations ranging from 0 to 21.5% v/v and surfactant concentrations up to 50% v/v. Four different compositions 30/13/57, 5/45/50, 21.25/21.25/57.5, 15/35/50 were chosen for further study on the basis of clarity and flowabilty. No phase separation was observed in the samples, which shows that all samples are stable for 1-year duration under the gravitational field. The viscosities of chosen compositions were investigated at seven different shear rates at 298°K. It was found from the studies that the shear viscosity decreases with shear rate for all the compositions. This indicates that the sample undergoes shear thinning. The viscosities of the samples are shown in the Table 1. Shear thinning occurs as the dispersion suffers fragmentation with increasing shear rate. All the samples were found to be stable except the one having the composition 5/45/50, which showed phase separation after a period of 2 mo, which may be due to higher water content which destabilizes micellar layer formed between the oil and water. From fig. 2, it can be seen that the release profiles of both the formulations are nearly similar. The release rate constants of the drug from the prepared and marketed formulation were found to be 0.0559 min-1 (R2 = 0.9865) and 0.0704 min-1 (R2 = 0.9803) respectively. It was observed that the release of the drug from ME gel was slightly slower than its release from the marketed formulation. This might be due to the partitioning of the drug into the oil phase of ME gel, which retarded the drug release. 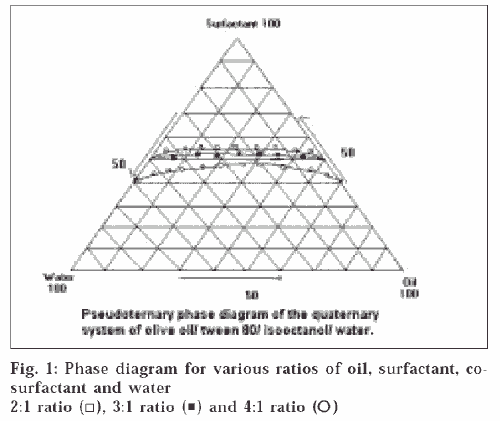 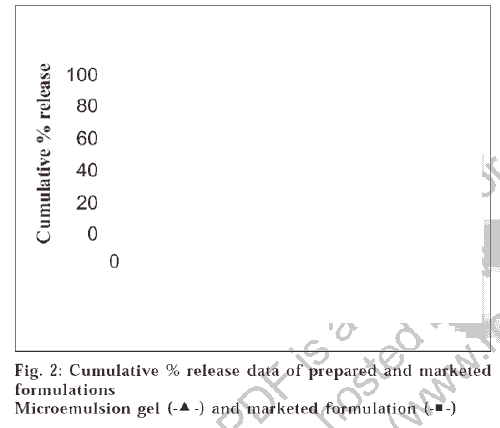 Authors are grateful to Sun Pharmaceuticals Ltd., Mumbai, for providing gift samples of nimesulide; and to N.D.M.V.P. Samaj’s College of Pharmacy, Nashik, for providing the necessary lab facilities.