The aim of present study was to prepare novel modified release press coated tablets of venlafaxine hydrochloride. Hydroxypropylmethylcellulose K4M and hydroxypropylmethylcellulose K100M were used as release modifier in core and coat, respectively. A 3 2 full factorial design was adopted in the optimization study. The drug to polymer ratio in core and coat were chosen as independent variables. The drug release in the first hour and drug release rate between 1 and 12 h were chosen as dependent variables. The tablets were characterized for dimension analysis, crushing strength, friability and in vitro drug release. A check point batch, containing 1:2.6 and 1:5.4 drug to polymer in core and coat respectively, was prepared. The tablets of check point batch were subjected to in vitro drug release in dissolution media with pH 5, 7.2 and distilled water. The kinetics of drug release was best explained by Korsmeyer and Peppas model (anomalous non-Fickian diffusion). The systematic formulation approach enabled us to develop modified release venlafaxine hydrochloride tablets.

The mixture of venlafaxine hydrochloride and HPMC K4M was wet massed using 5% w/v solution of ethyl cellulose in acetone. The wet mass was passed through 30# to obtain granules. The granules were dried at 60o in a tray drier. The granules of 30/60# size were lubricated with 1% w/w magnesium stearate. The tablets with 10 kp crushing strength were prepared on a single station tablet press (Cadmach Machines Ltd., India). Table 1 depicts composition and results of evaluation of the preliminary batches (VH1 to VH3).

+The quantity of raw material is expressed in mg per tablet.

Core tablets were prepared using venlafaxine hydrochloride, dicalcium phosphate dihydrate, HPMC K4M, ethyl cellulose and magnesium stearate. The procedure employed for the preparation of venlafaxine hydrochloride core tablet was identical to that described above (preliminary work). The core tablets were compressed at low pressure to produce tablets with 7 kp crushing strength to enable press coat to stick well with the core.

Press coat layer (57% weight gain) contained venlafaxine hydrochloride, dicalcium phosphate dihydrate, HPMC K100M, ethyl cellulose and magnesium stearate. Granules of venlafaxine hydrochloride were prepared by wet granulation technique. One-half of the required quantity of granules was transferred in the die. The core tablet was then carefully placed in the centre of the die and the remaining half of the granules was placed in the die. Press coated tablet with 13 kp crushing strength were prepared on single station tablet press (Cadmach Machines Ltd., India). Different batches were prepared by altering the ratio of venlafaxine hydrochloride to HPMC to modify the drug release (Table 2). A 32 full factorial design was used for optimization. Table 3 shows the design layout for the optimization study and the responses. The press coated tablets were characterized for dimension analysis, friability and in vitro drug release.

Evaluation of the tablets

The angle of repose was measured using the fixed height funnel method [18]. Glass funnel was secured with its tip at a given height (H) above a graph paper placed on a horizontal surface. Granules were poured through the funnel until the apex of conical pile touched the tip of funnel. The angle of repose was calculated using formula: tan α = H/R, where α is the angle of repose and R is the radius of conical pile. The diameter, thickness and crushing strength of ten randomly selected tablets were determined using Dr. Scheleuniger tablet hardness tester (Pharmatron 8, Germany). Friability was evaluated as the percentage weight loss of twenty tablets tumbled in a friabilator (Electrolab, Model EF2, India) for 4 m at 25 rpm. The tablets were dedusted and the loss in weight caused by fracture or abrasion was recorded as the percentage friability.

The tablets were subjected to in vitro drug release for 12 h in a calibrated USP dissolution test apparatus (Electrolab, Model TDT 06-T, Mumbai) equipped with basket employing 900 ml phosphate buffer solution (pH 7.2). The baskets were rotated at 100 rpm and the dissolution medium was maintained at a temperature of 37±0.5o. Ten millilitre samples were withdrawn and analyzed spectrophotometrically at 225 nm using Shimadzu-1700 UV/Vis spectrophotometer after suitable dilution of the samples [19,20]. Equal volume of the fresh dissolution medium (10 ml, 37±0.5o) was replaced after each withdrawal. The absorbance values were transformed to concentration by reference to a standard calibration curve obtained experimentally (r2 = 0.999).

The method of Bamba et al. was adopted to ascertain kinetics of drug release [21]. In vitro drug release data were analyzed by fitting different kinetic models in order to evaluate the release mechanism of venlafaxine hydrochloride from the matrices (Table 4) [22-27]. A Fortran software, developed in-house, was used for computation of slope and intercept. The least value of sum of square of residuals (SSR) and Fisher’s ratio (F) were used to select the most appropriate kinetic model.

For a freely soluble drug like venlafaxine hydrochloride (534 mg/ml in water), a rapid rate of hydration of matrixing agent is necessary. A slow polymer hydration rate may lead to dose dumping due to quick penetration of dissolution fluid in the tablet core. Hence, a rapidly hydrating hydrophilic matrixing agent (HPMC K4M) was selected. Granulation is the key process parameter in the production of controlled/delayed release dosage forms [28]. The physical properties of granules such as specific surface area, shape, hardness, surface characteristics and size can significantly affect the rate of drug dissolution [29]. The granules were evaluated for angle of repose (Table 1). A chapter on powder flow has been recently introduced in USP 29-NF 24 [30]. The granules of batches VH1, VH2 and VH3 exhibited fair to passable flow. The diameter of formulated batches (VH1 to VH3) was 8±0.01 mm. The thickness of tablets of batches VH1 to VH3 increased from 2.0 to 2.7 mm due to increase in HPMC to drug ratio. The percentage friability for all the formulations (VH1 to VH3) was below 1%, indicating that the friability was within the prescribed limits [29]. Fig. 1 depicts that the tablets of preliminary batches (VH1 to VH3) exhibited burst release (>36% of drug in 1 h). The probable reason for faster drug release could be high aqueous solubility of the drug and short diffusion path. Hence, it was decided to coat the core tablet with HPMC K100M (batch VP0) using press coating technique. 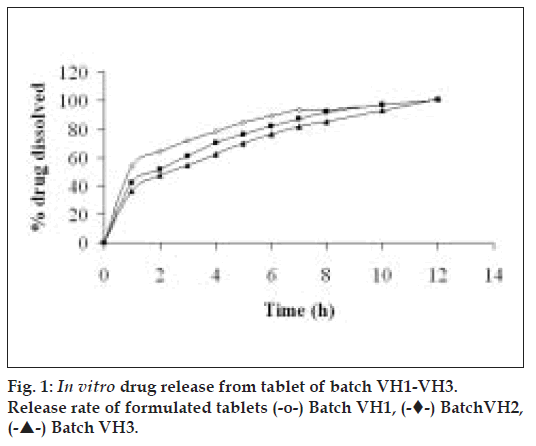 The diameter and thickness of press coated tablets ranged from 10.29 to 10.31 and 3.93 to 3.97, respectively. The percentage friability of all formulated batches were within the limits (<1%). Fig. 2 reveals the amount of drug released from batches VP0 to VP10. The drug release from batch VP0 was noticeably low (5% in 1 h). Moreover, complete drug release was not observed in 12 h. To achieve the desired drug release (16% in 1h), twenty percentage drug was incorporated in the coat. A 32 full factorial design was adopted to optimize the formulation. Batches VP5 and VP8 showed drug release close to the ideal requirement, i.e. 16% in first h. The slope (y2) of line correlating the amount of drug dissolved after first h versus time was computed to ascertain the drug release rate. The drug release rate from batch VP5, VP6, VP8 and VP9 was very close to that of the ideal value, i.e 7.6% per h. Further optimization was carried out by evolving mathematical models using multiple regression analysis. Eqn. 1 shows the relationship between the percentage drug released in first h (y1) and the independent variables. Fig. 3 represents contour plot for percentage drug release at first h (y1).:- y1 = 20.54–5.72x1-–7.62x2--(1), (r2= 0.94, P<0.05). Multiple regression analysis was adopted to evolve equation correlating the drug release rate after 1h (y2) with the independent variables (Eqn. 2). y2 = 7.57+0.48x1+0.37x2–-0.4x12-–0.4x22--(2), (r2= 0.98, P<0.05). 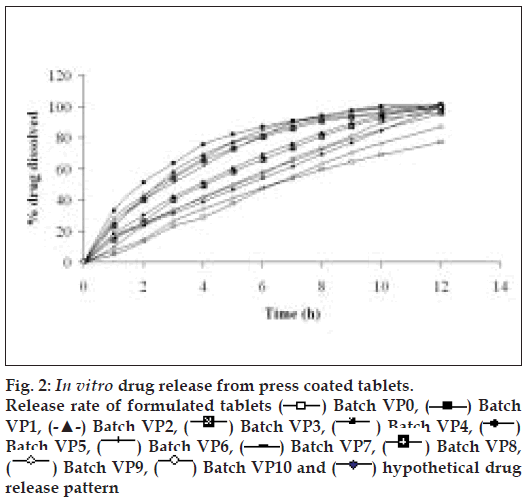 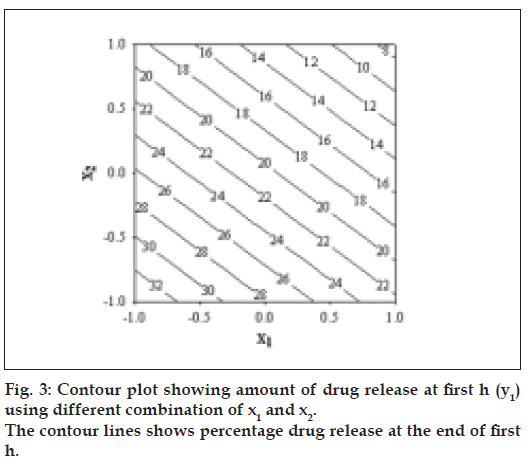 Fig. 4 represents contour plot for drug release rate after first h. A check point batch (VP10) containing 1:2.6 and 1:5.4 drug to polymer in core and coat respectively was formulated. The computed and experimental values of y1 and y2 for batch VP10 were 15.8 and 7.75; 16.3 and 7.4 respectively. Similarity factor (f2) was calculated considering the ideal release profile as reference and batch VP10 as test formulation. The computed value of f2 was 73.6. Therefore, it was concluded that the two dissolution profiles were similar. 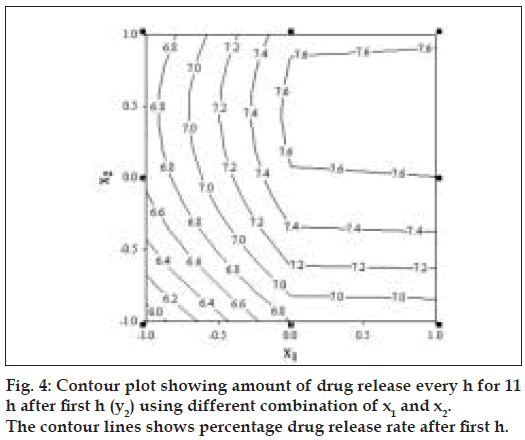 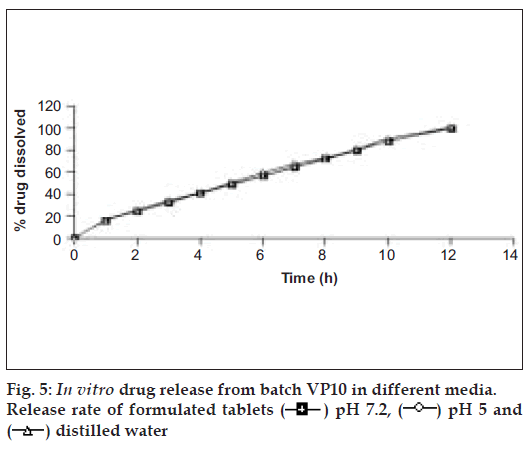 % diss* is the percent dissolved at time t, k is the dissolution rate constant, n is the release component,  is the shape parameter and Td is the time at which 63.2% of the drug is dissolved.

We are thankful to Torrent Pharmaceuticals and Zydus Cadila for providing gift samples.