Migraine is a neurologic disease, associated with throbbing intense headache in one half of the head. Rizatriptan is 5HT 1B/1D receptor agonist with an oral bioavailability of 40% and half life of 2-3 h. To increase the bioavailability and brain tissue deposition for antimigraine therapy, intranasal delivery systems were developed. Intranasal administration offers a practical, noninvasive, alternative mode for drug targeting to the brain. Absorption of drug at the olfactory region of nose provides potential for drugs to be directly delivered to the CNS. However, one of the problems associated with nasal delivery is lower retention time of solution in nasal cavity (15 min) resulting in lower bioavailability. Hence, the objective of this study was to develop intranasal nanoemulsion and gel formulations for rizatriptan benzoate for prolonged action, controlled release and direct targeting of drug to the brain tissues. 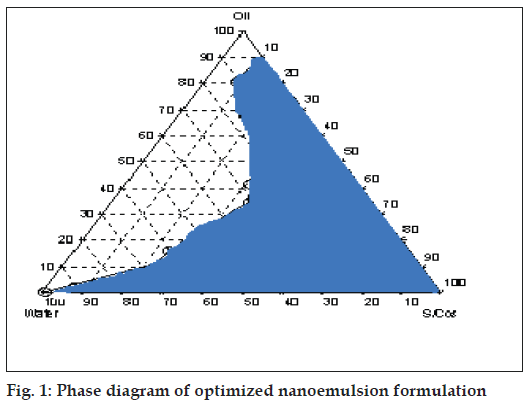 Mucoadhesive gel formulations of rizatriptan were prepared using different ratios of HPMC and Carbopol 980. The pH of the gel was adjusted to 7.0±0.2 with the help of triethanolamine. Sodium metabisulphite (SMB) and methyl paraben were added as antioxidant and preservative, respectively. Penetration enhancers like Lutrol F68 and sodium lauryl sulfate were tried out. Mucoadhesive gels were evaluated for appearance, pH, viscosity, consistency, mucoadhesive strength (fig. 2) and drug content. 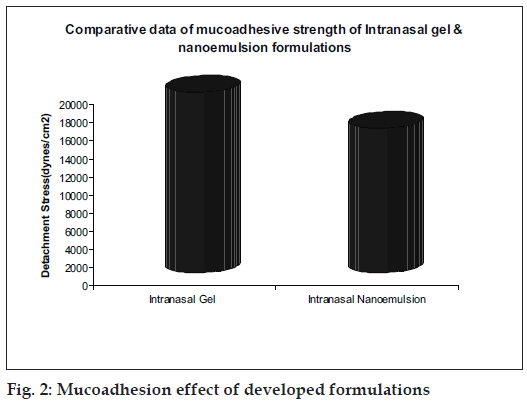 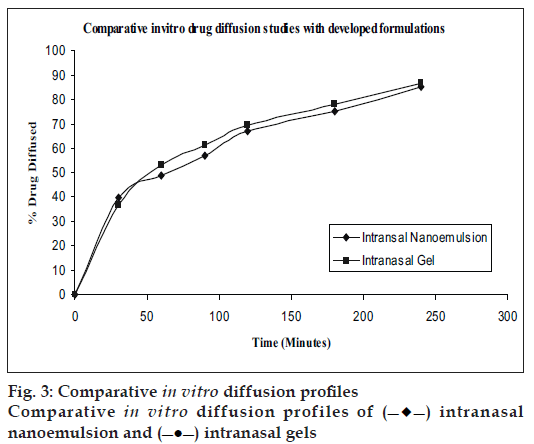 The amount of drug in the homogenized brain tissue of Wistar rats was detected and analyzed using developed and validated reverse phase HPLC method. The rizatriptan deposition in brain tissue from the developed intranasal formulations was compared with that obtained after IV administration (Table 2 and 3) as per the protocol approved by Animal Ethical Committee.

Nanoemulsions with S/Cos (3:1) and gels were transparent, stable with high drug incorporation. Ex vivo diffusion studies of the developed formulations gave controlled release with 86% in 4 h. Both the formulations exhibited bioadhesion. Brain targeting of IN nanoemulsions (AUC=302.52 μg min/g) was higher as compared to IN Gels (AUC=115 μg min/g) and IV administration (AUC=109.63 μg min/g) of the drug. Thus brain targeting through intranasal delivery has a potential for treatment of migraine.