Puerarin is the major bioactive constituent isolated from the root of the Pueraria lobata (Willd.) Ohwi, known as Gegen (Chinese) in traditional Chinese medicine. Puerarin has a wide spectrum of pharmacological properties such as cardioprotection, vasodilation, neuroprotection, antioxidant, antiinflammation, anticancer, alleviating pain, promoting bone formation, attenuating insulin resistance, and inhibiting alcohol intake[1]. However, due to the polyphenol ring and polyhydroxy groups in puerarin structure its water- and fat-solubility is low. It is also insoluble in chloroform, difficult to be absorbed through the gastrointestinal tract, has low oral bioavailability, which limits the clinical application of puerarin. At present, there is only one dosage form, the puerarin injection is in clinic[2]. After oral administration in adults, 0.78 % of puerarin is excreted in urine after 36 h, and 73.3 % is excreted in feces after 72 h[3]. This revealed that puerarin is not highly absorbed after oral administration because of its poor solubility. To improve the bioavailability of puerarin, an inclusion complex of puerarin-β-cyclodextrin (β-CD) is a good alternative.

CDs are torus-like molecules that have a hydrophilic outer surface and a lipophilic internal cavity, into which suitable molecules may enter to form an inclusion complex. Several methods, such as grinding, co-precipitation, spray drying, and freeze drying, have been developed to form an inclusion complex[2,4]. Unfortunately, many of these methods have shortcomings, including low efficiency, long processing times, high levels of residual organic solvent, and the need for an additional drying step. Over the last few years, the employment of supercritical CO2 as an abnormal inclusion medium has received increasing interest[4-10]. Supercritical CO2 antisolvent technology (SAS) has proven to be a convenient, product-controlled, and environment-friendly method for preparing inclusion complex nanoparticles (ICN)[11]. Among the many specific methods that have been developed[12], solution-enhanced dispersion by supercritical fluids (SEDS) is a particularly efficient method for producing ICN because of its specially designed nozzle[13,14].

In the present work, SEDS was used to prepare ICN of puerarin (ICNP) and improve the dissolution properties of puerarin. In the experiments reported herein, the effects of pressure, temperature, CO2 flow rate, and solution flow rate were investigated and the ICNP was characterized by scanning electron microscopy (SEM), X-ray diffraction (XRD), Fourier-transform infrared (FTIR) spectroscopy and dissolution testing.

The SEDS apparatus used in this study is the same as that described previously[15]. The experimental apparatus used for preparing the ICNP is primarily made up of a high-pressure plunge pump for delivering CO2, a high-pressure constant flow pump for liquid feeding, and a windowed precipitation chamber of 150 ml. A typical experiment was carried out as follows: supercritical CO2 was added to the precipitator vessel until the preset pressure and temperature were achieved, and these were maintained. The puerarin-β-CD solution was prepared by dissolving puerarin and β-CD (1:1 molar ratio) in DMSO. The puerarin solution was then injected at a flow rate until predetermined quantity of the solution had been processed. Supercritical CO2 was allowed to flow continuously for 20 min to eliminate the remaining organic solvent from the particles. Finally, the prepared particles were collected on a stainless-steel filter screen after depressurization.

The experiment was carried out at pressures of 10- 20 MPa and temperatures of 35-55°. The nozzle diameter was 0.12 mm. The concentrations of puerarin and β-CD in DMSO solution were 10.40 and 28.40 mg/ml, respectively. The flow rates of the solution and supercritical CO2 were 0.5-1.5 ml/min at the pump and 3-9 l/h, respectively. Tables 1 and 2 show the detailed experimental conditions.

Table 2: Inclusion yield and particle size of inclusion complex nanoparticles under different flow rates of solution and CO2 at 45° and 15 MPa

Determination of the inclusion yield:

The inclusion yield was measured with the same differential solubility method[16] that has been previously applied to measure the included/free drug ratio in piroxicam/CD inclusion complex, since the method is readily extended to other drug/CD systems[4,17]. This method is based on the differing solubility of the drug and CD in acetonitrile. When acetonitrile is mixed with the treated sample, the non-included drug is soluble, while the included drug remains trapped. The amount of the free drug can thus be measured. If the mixture of water-acetonitrile (1:1 v/v) is used instead of pure acetonitrile, the CD also becomes dissolved and the complex is completely dissolved, allowing the total amount of the drug to be measured[4]. The inclusion yield (η) can then be measured using the following Eqn. 1, η = 100×(1–free puerarin content/total puerarin content). Samples were determined for the free and total drug amount using a spectrophotometer (UV-2600, Shimadzu Corporation, Japan) at 250 nm.

A sample of 5 mg was dispersed with 5 ml water, and treated with ultrasound of 28 kHz for 1 min. Then the particle size of the sample was determined using a nanometer particle size and zeta potentiometric analyzer (Nano-ZS, Malvern Instruments Ltd., UK). This instrument can measure particle sizes ranging from 0.3 nm to 10 μm.

The powder XRD patterns were obtained with an X-ray diffractometer (Empyrean, Panalytical Company, Holland). The patterns were typically gathered over the 2θ range of 5-45°.

FTIR transmission spectra were obtained by a FTIR spectrophotometer (Avatar360, Nicolet Instrument Corporation, USA). The samples were ground and mixed thoroughly with KBr. The KBr disks were prepared by means of a hydrostatic press. The scanning range was 400-4000 cm−1, and the resolution was 4 cm−1.

Drug release determination was carried out at 37° for untreated puerarin, its unprocessed physical mixture with β-CD, and the ICNP, employing a test described in the Chinese Pharmacopoeia (volume IV, general rule 0931 (2015)). The apparatus was paddle. The dissolution tests were conducted in a vessel containing 900 ml of distilled water with rotation at 50 rpm. The sample (250 mg) was added to the chamber and 3-ml aliquots of the dissolution fluid were taken at 1, 3, 5, 10, 15, 20, 30, 45, and 60 min. These aliquots were filtered through a membrane (Sarstedt, pore size 0.45 μm). Each aliquot was replaced with an equal volume of fresh medium. The filtrates were determined spectrophotometrically at 250 nm.

As shown in Table 1, with a constant solution flow rate of 1 ml/min and CO2 flow rate of 6 l/h, under different pressures and temperatures, the inclusion yield of ICNP prepared using SEDS ranged from 80.49 to 98.23 %. Overall, the inclusion yield was higher at a higher temperature (55°) because of a shift in the equilibrium of complexation toward the complexed form[18]. This agreed with the finding of Banchero and Manna[4].

Table 1 show that the particle size of ICNP decreased along with increasing pressures at different temperatures. This result confirmed previous experimental findings[15,19]. At lower pressures, the system was closer to the mixture critical point[20], and the mass transfer between the organic solvent and CO2 was slow, causing a gradient change among the local supersaturation states within the mixing region, which resulted in larger particles[21]. In contrast, at higher pressures (far above the mixture critical point), the mass transfer was very fast, avoiding the gradient difference within the local supersaturation states, resulting in smaller particles[15] .

Table 2 shows that at the same solution flow rate the relationship between CO2 flow rate and particle size was complex. With a greater CO2 flow rate, the disturbance of CO2 in the coaxial nozzle is greater. Solute molecules collide violently, resulting in larger particles. Meanwhile, with a greater CO2 flow rate, the effect of SAS is greater. The solute leads to supersaturation, with instant nucleation increasing, resulting in smaller particles.

In this study, untreated puerarin, β-CD, their unprocessed physical mixture, and ICNP were analyzed by SEM (fig. 1). Fig. 1 shows that the raw puerarin was asymmetrically bulky. The raw β-CD was irregularly clubbed. Their unprocessed physical mixture was asymmetrically nubby and clubbed. The ICNP comprised sticky spherical particles. Further supporting evidence for the formation of an inclusion complex between puerarin and β-CD was obtained from the powder XRD patterns. The XRD patterns in fig. 2 show that the untreated puerarin and β-CD exhibit a series of intense peaks corresponding to their crystallinity. Moreover, the pattern of the physical mixture presents peaks similar to the superposition of the patterns of the untreated puerarin and β-CD, indicating there was no new substance forming. By comparison, the pattern generated by the ICNP was not similar to those mentioned above; there were no intense peaks of puerarin, and it was not similar to the diffraction curve of β-CD. It showed that a new solid phase generated, which indicated formation of an inclusion complex. 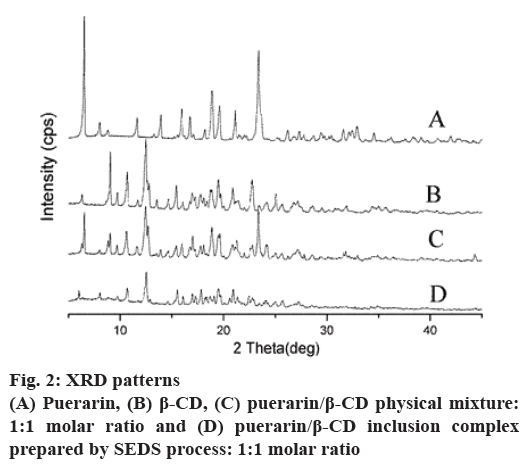 FTIR spectroscopy was used to obtain further information on the state of the drug in the inclusion complex formulation. Changes in the FTIR spectra such as shifts in characteristic peaks, reduction of or disappearance in peak intensity, and the appearance of new peaks might be connected to drug-CD interactions[24]. Fig. 3 showed the FTIR spectra of the puerarin, β-CD, puerarin/β-CD physical mixture and puerarin/β-CD inclusion complex prepared by SEDS. As shown in fig. 3, the IR spectra of the physical mixture were similar to the superposition of the spectra of puerarin and β-CD, which indicated there was no new substance forming. The IR spectrum of ICNP was similar to that of β-CD and the physical mixture, which indicated that the main structures between ICNP and β-CD were the same. There were some obvious changes of characteristic absorption peaks of puerarin: (1) C=O (1633 cm-1) shifted to 1627 cm-1, and (2) the intensity of the benzene ring peak (1515 cm-1) decreased. These changes showed that some puerarin molecules were included in the hydrophobic cavity of β-CD[25]. (3) C-O-H peaks at 1267 cm-1 in inclusion complexes had much higher intensity than that of β-CD. This is evidence of the formation of hydrogen bonds between the hydroxyl groups of β-CD and the carbonyl groups of puerarin. Based on the discussion above, it is reasonable to conclude that the host-guest inclusion complex was formed[26]. 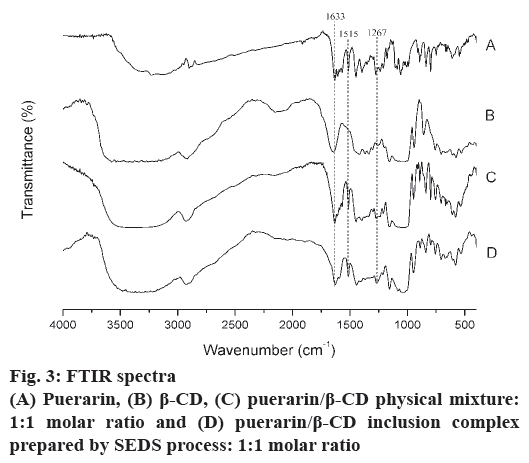 Drug release studies were performed in distilled water to evaluate the extent to which the loading process improved the water solubility of puerarin. Fig. 4 shows that in the same experimental conditions, after 5 min the dissolved drug for raw puerarin, the physical mixture and ICNP were 68.69, 78.70 and 98.60 %, respectively. The untreated puerarin dissolved slowly. The addition of β-CD evidently had a positive effect because the untreated physical mixture exhibited higher dissolution rates than the untreated puerarin. The dissolution of ICNP enhanced greatly with 98.60 wt. % dissolved after 5 min. The ICNP prepared using SEDS improved the solubility and dissolution rate of puerarin. 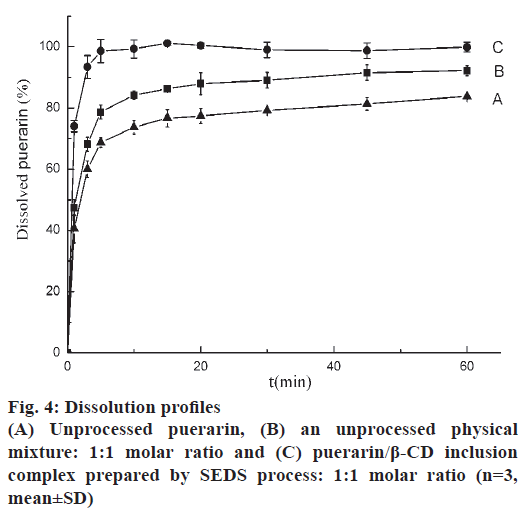 Uniform spherical ICNP were prepared using SEDS in this study. The procedure parameters such as pressure, temperature, CO2 flow rate, and solution flow rate were investigated. Elevated temperatures increased the inclusion yield. Elevated pressures reduced the particle size. SEM, XRD and FTIR confirmed the formation of ICNP. The ICNP could enhance the release rate of puerarin, with a quick release effect.