Acquired Immune Deficiency Syndrome (AIDS) is the most common problem worldwide because of the rapid increase in the number of victims. World Health Organization recently uses the term ‘Global epidemic’ to describe the Human Immune Deficiency Virus (HIV). In 2019, approximately 38 million people were infected by HIV and 690 000 deaths due to HIV related illnesses in 2019[1]. Antiretroviral therapy has undergone significant changes over the past decades. Antiretroviral drugs are active against the HIV. They help prolong and improve the quality of life and postponing complications of AIDS or AIDS related complex[2]. Although progress in managing people alive with HIV and the significant developments in morbidity and mortality, failure in retroviral therapy still occurs. Along with treatment failure, HIV becomes more resistant to antiretroviral drugs[3,4].

Encapsulation of medicaments in the vesicular organization can be expected to prolong the availability of the medicaments in the systemic circulation and hence augment penetration into objective tissue and diminish toxicity. The constituents of vesicles influence their physicochemical properties, such as their charge, elasticity, size, lamellarity and thermodynamic phase. The vesicular construction can also be altered to afford controlled or sustained drug delivery for extended periods[5]. Vesicular drug transporters such as liposomes, niosomes, virosomes, transferosomes, proteasomes, archaesom, sphingosomes, phamacosomes, ethosomes showing a very hopeful role in drug delivery and avoiding demerits associated with conventional dosage forms because these particles can act as drug reservoirs[6]. Niosomes are unilamellar or multilamellar microscopic vesicles, formed on admixtures of nonionic surfactant and cholesterol with subsequent hydration in the aqueous media can entrap both hydrophilic and lipophilic drugs, either in the aqueous region or in a vesicular membrane made of lipid materials[7,8]. Since the 1980s, niosomes have gained wide attention by researchers for their use as drug targeting agents, drug carriers to have various merits while avoiding demerits associated with the conventional form of drugs[9,10]. Liver act as a depot for many drugs where niosomes containing drugs may be taken up and broken down by lysosomal lipase slowly to release the free drug and re-enter the circulation. Hence niosomes are slowly degraded providing a more sustained effect[11]. However, aqueous suspensions of niosomes may exhibit physical instability problems such as aggregation and fusion of vesicles and leaking or hydrolysis of the encapsulated drug. Proniosomes minimize problems of niosomes and provide additional convenience in transportation, distribution, storage and dosing, which would make dry niosome a promising industrial product[12,13]. By considering the above advantages, proniosomes and niosomes of abacavir sulphate were prepared in this study.

Niosome containing abacavir sulphate formulations were prepared by thin film hydration method. Tween 60, cholesterol and dicetyl phosphate were accurately weighed and transferred into a long necked 100 ml round-bottom flask and dissolved in 10 ml chloroform. The flask was attached to a rotary evaporator. The organic solvent was slowly evaporated at 60° under reduced pressure at 100-150 rpm such that a thin, dry film of the constituents was formed on the inner wall of the flask. Any excess chloroform was removed by leaving the flask in a desiccator under vacuum overnight. The dried thin film was then hydrated with 10 ml pH 7.4 phosphate buffer saline containing 25 mg abacavir sulphate (Drug Loaded Niosomal Formulation (DNF)) or 10 ml pH 7.4 phosphate buffer saline (Blank Niosomal Formulation (BNF)) by rotating the flask in the same rotary evaporator under normal pressure at 60° to ensure complete hydration of the film. The prepared niosomal preparations were stored at 4° to 8° in a refrigerator for further evaluations[15,16].

Proniosome formulations were prepared by the slurry method. In brief, accurately weighed amounts of lipid mixture comprising of tween 60 and cholesterol, with 5 μM dicetyl phosphate were dissolved in 4 ml chloroform. The drug was dissolved in 6 ml methanol and the resultant solutions were transferred to a 250 ml round bottom flask having a maltodextrin carrier. Additional chloroform:methanol solution was added to form slurry in the case of inferior surfactant loading. The flask was attached to a rotary flash evaporator to evaporate solvent at 100-150 rpm, a temperature of 60° and a reduced pressure of 600 mm of Hg until the mass in the flask had become a dry, free flowing product. After ensuring the complete removal of the solvent, the resultant materials were further dried overnight in a desiccator under vacuum at room temperature. These proniosome granules were stored in a tightly closed container at refrigerator temperature at 4° to 8° until further evaluation. Blank proniosomes were made in the same way without incorporating drug[17,18]. The composition of abacavir sulphate niosomal and proniosomal formulations are represented in Table 1.

Characterization of niosomes and proniosomes:

The niosome and proniosome derived formulations were characterized for vesicle formation by the optical microscopy method[5]. Vesicle size, size distribution and zeta potential of niosomes and niosome vesicles derived from proniosome samples were determined by photon correlation spectroscopy using the Malvern Zetasizer[19]. Free abacavir sulphate was separated from conventional niosomes and proniosome derived niosomes by centrifugation at 15 000 rpm and 4° for 1 h using a cooling centrifuge and the encapsulation efficiency was determined[20]. Abacavir sulphate content in both formulations was estimated at 285 nm by a Ultraviolet (UV) spectrophotometric method[21]. The morphology of abacavir sulphate optimized niosomal formulation was investigated by transmission electron microscopy[18]. In vitro release model of niosomal dispersion was carried out by dialysis bag method[22,23]. 3 ml of abacavir sulphate noisome dispersion was taken in dialysis bag (Hi Media). Dialysis bag was mounted in a beaker containing 100 ml of 0.1N HCl and pH 6.8-phosphate buffer. Magnetic stirrer was used and the temperature was maintained at 37°±1°. Samples were collected periodically up to 24 h. The sink condition was continued throughout the experiment. The withdrawn samples were suitably diluted and analyzed for drug content using UV spectrophotometer at 285 nm keeping phosphate buffer pH 7.4 as blank. All the observations were made in triplicate. The exterior characteristics of the proniosome powder and maltodextrin were examined by scanning electron microscope (JSM 6390LA, Jeol, Tokyo, Japan)[24]. The physical stability study was carried out to investigate the degradation of the drug from niosome and proniosome formulations during storage[25,26].

The molecular state of abacavir sulphate in niosome and proniosome formulations was investigated by performing Differential Scanning Calorimetric (DSC) analysis. The DSC thermograms of pure Abacavir sulphate, the (DNF, Drug Loaded Proniosomal Formulation (DPF)), maltodextrin, tween 60 and cholesterol were obtained by a differential scanning calorimeter. Each formulation was positioned in flat bottomed aluminium pans and then crimped with an aluminum wrap. The samples were heated from 30° to 400° using a platinum crucible and heat flow rate was kept at 10°/min with a nitrogen stream at 20 ml/ min[10,24]. The crystallinity of abacavir sulphate after encapsulation into vesicular and provesicular system was evaluated by X-Ray Diffraction (XRD) recorded for pure abacavir sulphate, formulations (DNF, DPF) and individual formulation excipients. XRD analysis was carried out using an Ultima 3 theta-theta goniometer for pure drug, formulation excipients, lyophilized blank and Abacavir sulphate loaded niosome and proniosome formulations. The samples were measured with a K-beta filter, fixed monochromatic using 40 kV and 32 mA current. The continuous scanning was carried out at the scanning mode of 2θ[25,26].

Study design: The pharmacokinetic study was carried out with the approval of the Institutional Animal Ethical Committee (JKKN/IAEC/PHD/03/2017), J. K. K. Nattraja College of Pharmacy, Namakkal District, Tamil Nadu, India. The study was aimed to compare the pharmacokinetic profile of abacavir sulpahate-proniosomal formulation and niosomal formulations. The expression of several phase II drug metabolizing enzymes appears to be affected by female sex hormone in rats. So, in this study male Albino Wistar rats were selected for pharmacokinetic evaluation. The selected male Albino Wistar rats (200-250 g) had free access to water and food. Before dosing, the rats were kept for overnight fasting. The rats were divided into four groups containing three in each. The treated animals were set aside in separate cages and upheld under a laboratory environment. The study was planned as a single oral dose. All groups of animals received an equivalent of 8.57 mg of abacavir sulphate/kg body weight of rats. Group I received pure drug solution, Group-II received blank proniosome formulation, Group III received Abacavir sulphate niosomal formulation and Group IV received Abacavir sulphate proniosomal formulation. 500 μl blood samples were collected from the tail vein into heparinized tubes at 0.5, 1, 2, 4, 8, 12 and 24 h after administration.

The plasma was separated by centrifugation process at 10 000 rpm for 10 min in a micro-centrifuge (Eppendorf AG, Germany. 5430R,) and stocked at -20° until drug analysis was done by High-Performance Liquid Chromatography (HPLC) method[20,27].

Chromatographic separations were made on Phenomenex C18 column (250×4.60 mm ID, 5 μm particle size) and the injected volume was 10 μl. The column temperature was maintained at 30°. The mobile phase was 0.1 % formic acid in milli-Q-water:0.1 % formic acid in methanol (70:30 % v/v). The absorbance was monitored at 298 nm. The chromatographic analyses were performed using HPLC system consisting of an Agilent 1200 Series components. Detection was achieved by a Diode Array Detector (DAD).

Abacavir sulphate equivalent to 10 mg Abacavir was weighed into 10 ml standard volumetric flask, dissolved with methanol and shook well and made up to the mark with methanol. From the 100 µg/ml diluted stock solution, 1, 2, 5, 10, 25 and 50 µg/ml standard solution were prepared using methanol.

For analysis, 0.1 ml of plasma was transferred into the eppendorf vial and added 0.4 ml of methanol. It was shaken well and centrifuged with a cooling centrifuge at 3000 rpm for 10 min until the precipitate was settled completely. Decanted the supernatant and transferred in HPLC injector vial for HPLC-DAD analysis. 10 µl of the methanol aliquot of sample was injected into HPLC.

The present study was undertaken to formulate abacavir sulphate niosome by thin film hydration method and proniosome by slurry method. Based on the results of preformulation studies, 250:250 μM ratio concentration of tween 60: Cholesterol was fixed for formulations. The proniosome formulation by the slurry method was found to be a convenient method than the conventional niosome formulations prepared by thin film hydration method. The major difficulty found in thin film hydration method in the preparation of conventional niosome is the requirement of additional time for the entire hydration and prevent the loss of surfactant-lipid film still after the hydration period of 1 h at 60°. This problem may be occurred due to the conversion of thin film to viscous and adhere to the surface of the round bottom flask after the initial hydration. The formulation of proniosomes by the slurry method was found to be more convenient and the hydration of proniosome to niosome had taken a short period of time (2 min at 80°) in vortex mixture. The convenience during hydration of proniosome is due to the more surface area of the surfactant-lipid film that occurs over the water soluble carrier particle maltodextrin. 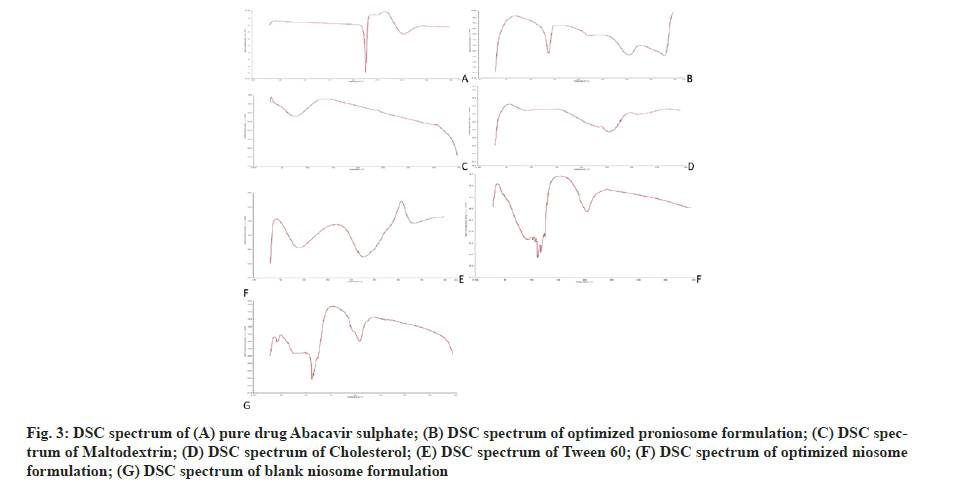 We are grateful to Chairperson, Director, J.K.K. Nattraja College of Pharmacy and Dean, Department of Pharmaceutical Technology, Anna University for facilitating required research sources. Also, we want to express the gratitude to Cipla Ltd. for the gift sample of Abacavir sulphate.