The purpose of this study is to determine the pharmacokinetic parameters of vancomycin in Egyptian paediatric oncology patients and to evaluate the factors that influence the variability of the pharmacokinetic parameters in this population. Vancomycin serum concentration at steady state was determined in 51 paediatric cancer patients who were treated with vancomycin multiple intravenous infusions. Also individual vancomycin pharmacokinetic parameters were calculated assuming one compartment model. The mean vancomycin total body clearance and mean vancomycin volume of distribution were significantly higher among the age range of 2 to <12 years as compared with older age. Obese patients showed significant lower values of peak and trough vancomycin concentrations than those of normal and underweight patients. A significant correlation was found between the estimated creatinine clearance (Schwartz formula) and vancomycin total body clearance in the studied patients. Also, a significant direct correlation between vancomycin volume of distribution and ratio between blood urea nitrogen (mg/dl)/weight (kg) was found. As a conclusion, age and obesity were identified as the most important factors influencing vancomycin total body clearance, volume of distribution and serum concentrations in the studied patients.

Gram-positive cocci are the leading cause of infections in neutropenic patients, making up approximately 60-70% of documented infections [1,2]. Vancomycin is a glycopeptide antibiotic against Gram-positive bacteria including methicillin-resistant Staphylococci [3]; and continues to be a frequently prescribed antibiotic for suspected and confirmed Gram-positive sepsis among paediatric patients admitted to the intensive care unit [4].

The present study was conducted at the National Cancer Institute (NCI), Cairo University, Egypt during the period of July 2009 to January 2010 after obtaining approval from the Institute’s Medical Ethics Committee.

Fifty-one paediatric cancer patients of either sex (28 males and 23 females) ranging in age from 2 to 18 years were enrolled into the study (Table 1). Complete history and physical examination were performed before the administration of intravenous vancomycin. Inclusion criteria were: (a) to receive a constant dose of vancomycin (fixed dose and dosing interval) at least for 24 h to ensure achievement of the steady state condition; (b) age of more than 1 month and less than 18 years. Creatinine clearance for each patient was determined according to Schwartz formula [7], Cr Cl (ml/min/1.73 m2)=(K×Ht cm)/Scr mg/dl. Patients were classified into different groups according to age, gender and body mass index (BMI) for age percentiles (Table 1).

Table 1: Demographic Characteristics Of The 51 Patients And Classification

Vancomycin (Vancocin® 500 mg vial, Eli Lilly, Cairo, Egypt) was administered via slow intermittent intravenous infusions over 30 min. All patients received a fixed dose of vancomycin of 15 mg/kg every 6 h with maximum dose of 500 mg every 6 h according to the hospital protocol. Two blood samples for vancomycin serum determination were drawn from a peripheral vein from each patient. The first blood sample was taken at least 1 h from the initiation of the infusion of the drug to avoid the distribution phase [8]; the second blood sample was taken at least one approximated t1/2 apart from the first sample to provide more precise estimates of the elimination rate constant (kel), from which trough could be calculated.

Blood samples were centrifuged at 3000 rpm for 10 min to separate the serums. Serum samples were kept frozen at -20° until the time of drug analysis. Vancomycin serum drug levels were measured by using vancomycin enzyme multiple immunoassay technique (Emit® 2000), supplied by Syva company (Dade Behring Inc., Cupertino, CA, USA); which showed a coefficient of variation (CV) of 4.2% at a concentration of 7.4 mg/l, 2.4% at 17.5 mg/l and 4.6% at 34.0 mg/l.

Kruskal–Wallis nonparametric method followed by Steel–Dwass multiple comparisons test were used to determine statistical difference of various pharmacokinetic parameters and also measured vancomycin levels (peak and trough concentrations) between more than two independent mean groups. Calculated parameters between two independent mean groups were compared by Mann–Whitney U test. Spearman’s Rho test (correlation analysis) was used to measure strength of association between numerical data. To compare the values of this study with other reports, mean and standard deviations of the mean pharmacokinetic parameters were determined. Statistical significance was considered at P-values less than 0.05. All statistical analyses were carried out using GraphPad Instat software package, V. 3.05, USA, 2000.

The study included 51 patients (28 males; 54.9% and 23 females; 45.1%). A summary of mean vancomycin peak and trough concentrations and pharmacokinetic parameters is presented in Table 2. As seen from Table 3, the mean vancomycin total body clearance and mean vancomycin volume of distribution were significantly higher (P<0.01) in age group 1 (2 to <12 years) as compared with age group 2 (12-18 years).

Values are expressed as mean±standard deviation and the values in parenthesis represent range. §§(Mann–Whitney test, ClT=total body clearance of vancomycin, Vd=volume of distribution of vancomycin, t1/2=elimination half‑life of vancomycin

Table 3: Effect of age on vancomycin drug Level and pharmacokinetics

Both vancomycin total body clearance and volume of distribution had decreased significantly (P<0.001) with increase in patients’ age (figs. 1 and 2). 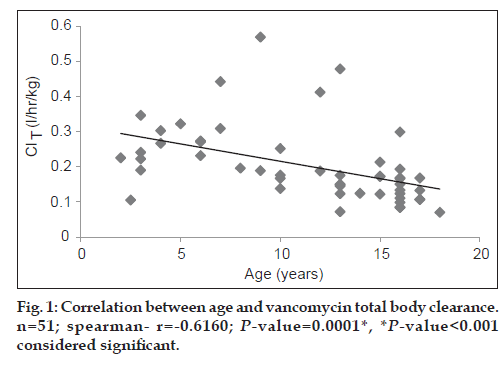 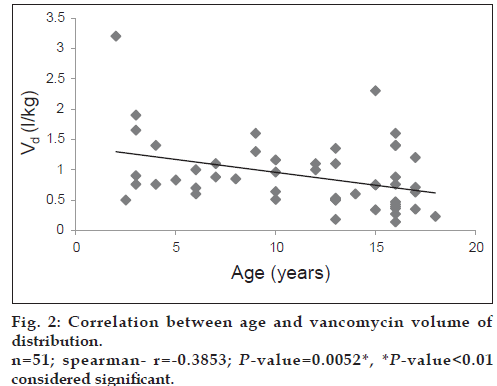 Values are expressed as mean±standard deviation and the values in parenthesis represent range §(Mann–Whitney test, ClT=total body clearance of vancomycin, Vd=volume of distribution of vancomycin, t1/2=elimination half‑life of vancomycin)

Table 4: Effect Of Gender On Vancomycin Drug Level And Pharmacokinetics

Values are expressed as mean±standard deviation and the values in parenthesis represent range. §(Kruskal–Wallis test, ClT=total body clearance of vancomycin, Vd=volume of distribution of vancomycin, t1/2=elimination half‑life of vancomycin).

Table 5: Effect Of Bmi On Vancomycin Drug Level And Pharmacokinetics 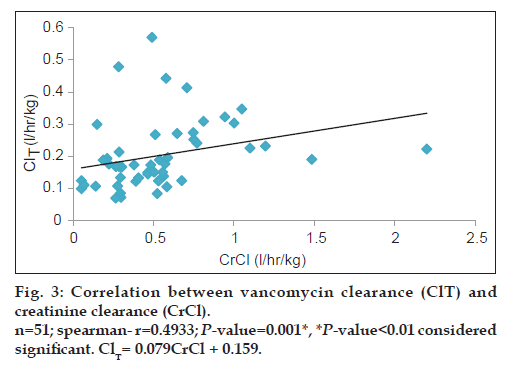 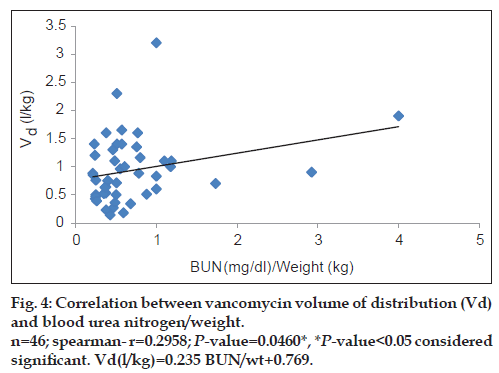 Vancomycin peak and trough concentrations are in agreement with the reported values of paediatric cancer population suggested by Krivoy et al. [17]. While the present value for vancomycin clearance (0.2±0.11 l/h/kg) is higher than the reported value of 0.11±0.14 l/h/kg [17]; this may be due to the higher overall value of vancomycin volume of distribution. In general, vancomycin total body clearance is reported to be markedly elevated in haematologic malignancies compared with normal individuals [17]. Vancomycin Vd was found to be higher than values reported from other studies [10,11]. The increased volume of distribution in our patients may be due to several factors such as aggressive fluid treatments, severe infections and haemodynamic unstable, which are generally found in critically ill patients [18].

The study of Schaad et al. [12] was conducted on neonates, infants and children; in children this study showed that vancomycin ClT was increased with increase in age till reach age of 8 years, then as puberty approaches in children (aged ~12-14 years) vancomycin clearance gradually decreases and approach adult values with no effect on Vd. These results were in agreement with our studied patients’ results but in our study Vd decrease with age increase with no effect on half-life, and this may be due to that the nutritional support and aggressive fluid treatments of our cancer patients are varied from other patient populations or healthy volunteers so, nutritional support and aggressive fluid treatments are very important factors affecting vancomycin volume of distribution.

Matzke et al. [15] and Rodvold et al. [16] found a significant correlation between CrCl and vancomycin volume of distribution. According to our results, vancomycin volume of distribution Vd was increased significantly with increase in ratio between BUN (mg/dl)/weight (kg). (r=0.2958; P<0.05) and vancomycin Vd could be calculated from patient’s BUN and weight as follows: Vancomycin Vd (l/kg)=0.235 [(BUN)/weight]+0.769. Therapeutic drug monitoring for vancomycin is still important in this population as a result of unpredictable inter-patient variability. It also enables dose individualisation to be made early in therapy.

The authors thank all the doctors and nurses at the paediatric ward, laboratory technicians, National Cancer Institute, for their cooperation and help.