Phyllanthus urinaria Linnea is commonly used in folk medicine with considerable therapeutic utility. Sixteen phenols of Phyllanthus urinaria were isolated from ethanol extract and their structures were identified by spectroscopic data. Oxygen radical absorbance capacity, radical scavenging assay and HBsAg and HBeAg ELISA kits were used to evaluate antioxidant and antiviral activities. All the isolates showed significant antioxidant activity. Especially, isolates 4 and 5 had the oxygen radical absorbance capacity of 5.12 and 8.13 U/mol and strong radical scavenging activity with IC50 values of 5.50 and 5.55 μM, respectively. Additionally, these studies also demonstrated that the compounds 1, 2, 11, 12, and 16 inhibited secretion of HBsAg and HBeAg in HepG2.2.15 cells. This study suggested that the phenolic constituents of Phyllanthus urinaria possessed antioxidant activities and these might play an important role in antihepatitic effects.

Phyllanthus urinaria Linnea (Euphorbiaceae) is an important traditional herb, which is widely used in subtropical area of Asia for liver protection, hepatitis, nephrolithiasis, dropsy, jaundice, and diabetes [1]. It has attracted more and more attention due to its ability to treat HBsAg carriers reported by Thyagarajan et al. [2].

Contemporary pharmacological research reported that P. urinaria exhibited antioxidant activity and significantly reduced nitric oxide radicals associated with cell-mediated immune diseases [3]. Geraniin, a tannin from P. urinaria, was reported to exhibit semicarbazide-sensitive amine oxidase inhibitory, antioxidant, and antihypertensive activities [4]. Additionally, ethanol, methanol and acetone extracts of P. urinaria inhibited HSV-2 infection in vitro [5]. Ellagic acid, a phenolic molecule identified in P. urinaria, was reported to exhibit antihepatitis B virus activity through down-regulating hepatitis B virus (HBV) gene expression and decreasing the secretion of HBsAg and HBeAg in HepG 2 2.2.15 cell line [6]. Phyllanthin, phyltetralin, trimethyl-3,4- dehydrochebulate, methylgallate, rhamnocitrin, methyl brevifolincarboxylate, β-sitosterol-3-O-β-Dglucopyranoside, quercitrin, and rutin were isolated from the ethanol extract of this plant for searching potent natural antiinflammatory agents, and their antioxidant, and antiinflammatory activities in vitro were assayed [7]. Recently, (4R,6S)-2-dihydromenisdaurilide (DHMD) as an efficient inhibitor of hepatitis C virus (HCV) entry as well as (−)-menisdaurilide was isolated from the plant, and its mechanism on antiHCV infection was investigated in vitro [7].

Earlier phytochemical studies on P. urinaria indicated that its major constituents were tannins, flavonoids, lignans, coumarins, and polyphenols [8-12]. Among these compounds, a few compounds such as gallic acid, rutin, ellagic acid, and quercetin [13-16] have sufficiently been studied. Some of small molecule polyphenols have also been confirmed possessing significant bioactivities, and their pharmacological activities may mainly stem from their free radical scavenging and their actions on cell signaling pathways [17,18].

Although a series of chemical constituents and their activities from P. urinaria had been revealed earlier, further systematic phytochemical investigations and evaluations of biological activities are necessary for uncovering the fundamental constituents responsible for these therapeutic effects. The present study was aimed to investigate the phenol compounds from the ethanol extract of P. urinaria for potential antioxidant and antiviral activities. Isolation of 16 phenol compounds and the antioxidant and antiHBV activities exhibited by these are presented herein.

The plant material was provided by Shenzhen Hospital Affiliated to Guangzhou University of Chinese Medicine, Shenzhen, China, and authenticated in the Department of Pharmacognosy, College of Pharmacy, Jinan University. A voucher specimen (no. 20110901) was also deposited in the department.

Ten kilograms of the dried and ground material of P. urinaria was soaked in 95 % ethanol and extracted by percolation method. The extract (900 g) was obtained from the soaked solution after evaporation of the solvent. The extract was suspended in distilled water and partitioned successively with petroleum ether, chloroform, and ethyl acetate (EtOAc). The EtOAc extract (130 g) was subjected to silica gel CC eluting with CHCl3–CH3OH (100:0 to 0:100) in gradient to yield 8 fractions after combining based on TLC patterns. Various chromatographic (TLC, silica gel, Sephadex LH-20, ODS and HPLC) and spectroscopic methods (NMR, MS, UV) were used for the isolation and structural identification of compounds.

HepG2.2.15 cells (a HBV-transfected human HepG2 cell line) and HepG2 cells were cultured in DMEM medium with 10 % FBS and 1 % antibiotic mixture containing 100 units/ml penicillin A and 100 units/ml streptomycin in a humidified incubator with 5 % CO2 at 37°.

Antihepatitis B virus effect in vitro:

HepG2.2.15 cells (2×104 cells/well) were seeded in 24-well plates. After 48 h incubation, cells were treated with the absence or presence of various concentrations of samples for 6 d, and the culture medium was refreshed every 3 d by fresh drug containing medium. Meanwhile, the supernatants on day 3 and day 6 were harvested to determine the concentration of HBsAg and HBeAg using an ELISA kit. Lamivudine (3TC) was used as positive control and the absence of sample was served as blank control. Each test was carried in triplicate, and the HepG2 cells were used for testing cell viability using MTT assay.

ORAC assay was applied for evaluating the antioxidant activity of each compound [19,20]. Briefly, 20 μl of 10 μM samples to be tested or 20 μM Trolox, dissolved in phosphate-buffered saline (PBS), were transferred to each well. One hundred and forty microliters of final concentration of AAPH and 20 μl of final concentration of 63 nM fluorescein sodium salt were rapidly added to the reaction system in the dark. Fluorescence was immediately read at 538 nm (λex: 485 nm). The decrease of fluorescence values were recorded every 2 min at 37° with 5 s stirring before measurement until no fluorescence was detected in sample. The total volume of the reaction system was supplied to 200 μl by PBS and the Trolox was served as internal control. The area under the curve (AUC) was calculated using the Eqn. below, AUC = 2×(f0+f1+…+fn-1+fn)-f0-fn, where f0 is the initial fluorescence at 0 min, and fn is the fluorescence read at corresponding time. The net AUC is equal to the difference value between the AUC of the blank and each sample. ORAC values were calculated as, ORAC value = (net AUCsample/net AUCTrolox)×(molarity of Trolox/molarity of sample).

The radical scavenging activity was determined using the DPPH method in a microtiter plate [20,21]. Twenty microlitres of various concentrations of test samples diluted in methanol (0-30 μM final concentration) and 180 μl of 150 μM DPPH solution in methanol were added to 96-well microtiter plate. The mixture was incubated for 30 min in the dark with shaking before readings were taken. Quercetin served as a positive control, and sample was substituted by methanol in the blank. For each test, the loss on the absorbance was measured, and the DPPH radical scavenging rate (S %) was calculated in the following Eqn., S % = (Absblank–Abssample)/Absblank, where Abssample and Absblank are the absorbance of the DPPH radical solution incubated with or without the tested sample. For each compound, four concentrations were evaluated. All the biological assays on antihepatitis B virus effect in vitro, antioxidant activity test with ORAC and DPPH methods were done from 2016 to 2017.

All values were presented as means±SD. Oneway ANOVA was used to evaluate the data statistic differences using Prism 6 software. At least three independent tests were performed for all assay condition. 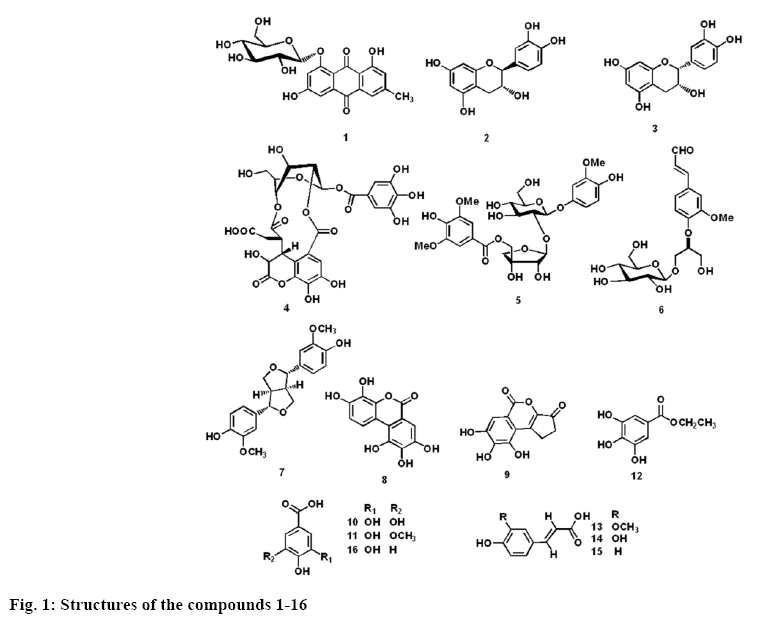 Figure 1: Structures of the compounds 1-16

The antiviral activity against hepatitis B virus of compounds 1-2, 4-7, 10-12, and 16 were investigated in vitro using ELISA assay, and the results were summarized in Table 1. The phenols tested in experiment showed potential antiHBV activity with stronger capacity against HBsAg secretion than HBeAg secretion at the third day or sixth day. Among them, compounds 1, 2, 11, 12 and 16 were the most active ones. They significantly inhibited HBsAg and HBeAg secretion at the maximum noncytotoxic concentration and showed stronger inhibition than the positive control lamivudine (3TC).

Antioxidant activities of isolates 1-12 and 15-16 were tested using the ORAC assay. According to the result of ORAC assay (Table 2), the isolated compounds 2, 4, 5, 11 and 15 exhibited obvious antioxidant activities with the ORAC values of 4.54, 5.12, 8.13, 4.85 and 4.88 U/mol. The curves of their relative fluorescence intensity were shown in figure 2, and they were even stronger than the positive control quercetin. Compound 5 was the strongest antioxidant among them. 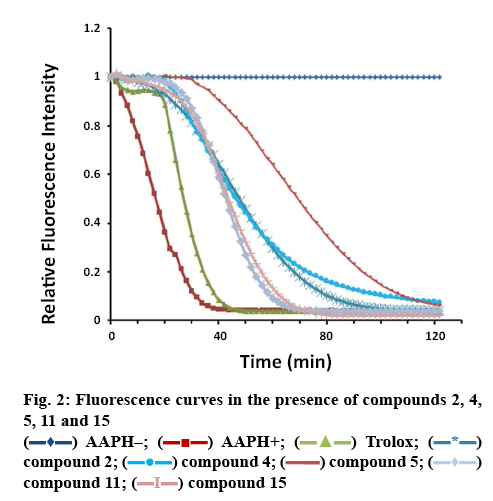 ‘a’Mean ORAC values±SD (n=9); ‘b’the concentration of tested compounds required to scavenge 50 % of DPPH radicals; ‘c’used as positive control. Note: U was equivalent Trolox of 1 mol; ‘-’ means no test because of the limit of amounts; the compounds 13 and 14 were not tested due to limited availability 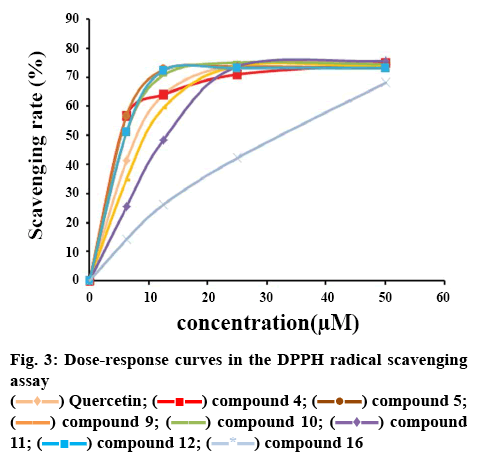 As a traditional antihepatitis herb in Eastern Asia, P. urinaria is rich in polyphenol compounds as reported in various phytochemical investigations earlier [4-11]. These investigations included the quantitative and qualitative analysis of phytochemical ingredients such as the location and confirmation of active extracts [34-36], and isolation of some compounds, even new natural products [4,5,9-11] from this plant. It is worthy to report that research involving bioactivity-guided purification of P. urinaria led to the discovery of a HCV entry inhibitors loliolide [37] and DHMD [7]. Furthermore, ellagic acid from P. urinaria, which effectively suppressed the HBeAg secretion in HepG2 2.2.15 cells as a novel antiHBV compound [7]. These studies showed that P. urinaria contained many complex and diverse constituents with potent biological activity, especially the phenolic compounds, which exhibited various biological activities such as antioxidant [18], antiviral [38], antitumor [39].

Our previous investigations on P. urinaria reported isolation of a series of flavonoid glycosides with antioxidant activities [12]. In this study, 16 phenolic compounds were isolated from P. urinaria, most of which contained two or more phenol groups. In phytochemistry, these can in detail be classified into anthraquinone (compound 1), flavanols (2 and 3), phenolic acids (10, 11 and 16) or phenolic derivatives (4, 5, 8, 9 and 12), phenylpropanoids (6, 13-15), and lignin (7).

In ORAC and DPPH assay, all compounds nearly exhibited different levels of ORAC and radical scavenge capacity, in which most of the tested compounds exhibited strong ORAC and the DPPH scavenging IC50 values were determined using dose-response curves. ORAC, DPPH assay demonstrated that these phenols exhibited good antioxidant activities. Among these polyphenols, the phenolic acids 3-O-methylgallic acid (11) showed significant activity both in the antioxidant and antivirus assays compared to other phenolic acids such as gallic acid (10), ethyl gallate (12) and protocatechuic acid (16). As to the antiviral activity, previous studies showed the gallate structure played a critical role in the inhibition of HBV activity [40]. In the antiHBV assay, the 3-O-methylgallic acid (11) and protocatechuic acid (16), especially the ethyl gallate (12) exhibited remarkable antiviral capacity.

Oxidative stress can result from increased production of reactive oxygen species (ROS). To maintain a proper redox balance, excrescent ROS may be scavenged, and the activities of oxidant enzyme may be diminished [41]. The antioxidant activities of polyphenols mainly stem from their ROS scavenging on the oxidative stress injury. Previous studies revealed that the effect of HBV on the host antioxidant system and Fas-signalling is a crucial factor in the development of hepatocellular carcinoma, because the change of antioxidant enzyme system sensitized the HBV transgenic mice to the Fas signaling pathway [42]. Furthermore, the ROS levels mediated by HBV X proteins were down-regulated by the treatment with antiviral drugs [43].

This research was financially supported by the grant (JCYJ20150401163247220) of Shenzhen Science and Technology Project of Shenzhen of China and the grant (No.81774263) of National Natural Science Foundation of China, and Project of Quality Standard for Chinese Materia Medica, Library for Chemical Constituents, National Administration Bureau of Chinese Medicine.