A pH mediated in situ gelling system was developed using prilocaine hydrochloride for periodontal anesthesia using combination of chitosan and hydroxypropylmethylcellulose. The gel so developed can be used as anaesthetic in lengthy dental surgery. The gel was evaluated for many parameters like gelation pH, viscosity, physicochemical properties, in vitro release, sterility and stability. Gel with chitosan (0.25% w/v) and hydroxypropylmethylcellulose (0.25% w/v) was found to have good gelation near pH 7.4 (pH of mucous) with prolonged action.

A number of topical anesthetics are used in dentistry, but they have some shortcomings like their low degree of efficacy, tendency to spread in other areas causing numbness of lips and tongue, bitter taste, difficulty in administration, and short duration of action. But as the scaling procedure is unpleasant and painful, anesthetic techniques used are nerve block/infiltration anesthesia in combination with topical anesthesia. So taking into consideration the above shortcomings, this research work was planned to develop a local anesthetic in situ gelling system suitable for administering in periodontal pocket, which would enable the patient to have painless treatment without distress of injection, stay at application site due to viscosity increase and give a fast onset of anesthesia lasting throughout the dental procedure and after that can be easily rinsed out with water causing a fast decline in anesthetic effect.

For this a novel polymeric system, gel-forming solution by a simple phase transition (sol-gel transition), mediated by pH were formulated using chitosan and hydroxypropylmethylcellulose (HPMC).

Different combinations of placebo formulations were developed and evaluated for their characteristics. Chitosan (viscosity 175 cps, insolubles 0.20%, deacetylation 84%, pH 8.34, moisture 7%, ash 0.48%, total plate count <5000/G) was dissolved in phosphate buffer system, pH adjusted to 5.5-6.0 by 1% v/v acetic acid. HPMC was dissolved in phosphate buffered saline, pH 7.4. Viscosity was measured using Brookfield‘s viscometer (model DV II, spindle no.02, at 20rpm), while clarity was examined through visual inspection. Different combinations tested are shown in Table 1. The formulations are selected/rejected on the basis of their clarity, turbidity and viscosity with change in pH.

All values are expressed as mean±SD (n=6)

From the above data formulation F4 consisting of chitosan/HPMC (0.25% each) was found to be optimum and was used for further studies. However formulations F1 (chitosan alone, 0.5%) and F7 (HPMC alone, 0.5%) were also studied to serve as control for comparison. For periodontal anesthetic activity prilocaine HCl was prescribed in a dose of 5%. Hence a dose of 5% was used during formulation. Complete formulae for different formulations were shown in Table 2.

All values are expressed as mean±SD (n=6)

Medicated formulations, F1, F4 and F7 screened out from the rheological studies and physical characterization were subjected to in vitro release studies using the dialysis technique. One millilitre formulation was taken in the dialysis tubes (molecular weight cut off 12, 000, Sigma Inc, MO, USA), which was suspended in beaker at 37±0.5° containing 100 ml simulated fluid (sodium chloride 0.670 g, sodium bicarbonate 0.200 g, calcium chloride dihydrate 0.008 g, and purified water q.s. 100 g), pH 7.4 under continuous stirring. One millilitre of samples was withdrawn at different time intervals and equal volumes of fresh media were added to replace the withdrawn samples. Withdrawn samples were diluted appropriately and absorbances of the samples were determined by UV spectrophotometrically at λmax 230 nm. Cumulative percent drug released was calculated. The optimized formulations were packaged in amber colored bottle fitted with a teat and sterilized by autoclaving at 121° at 15 lb/inch2 gauge pressure for 20 min. The tests for sterility were also conducted on these formulations as per Indian Pharmacopoeia [3].

The international conference on harmonization (ICH) Tripartite Guidelines defines the stability testing. Three packs of preparation F4 packed in amber colored bottle sealed with rubber teat were subjected to stability studies. The samples were kept in humidity and temperature control cabinet (Topsun, China) with automatic control to maintain constant temperature and humidity. The cabinet was then set at 40ο temperature and 75% relative humidity. At 0, 30, 60 and 90 days 0.1 ml of samples were withdrawn, diluted with distill water to 10 ml and assayed by UV at 230 nm. Samples were also tested for viscosity, gelation pH and appearance after every one month till three months.

Present study employed combination of chitosan and HPMC for the development of periodontal anesthesia. Properties of chitosan like bioadhesiveness, viscous nature and ability to convert into hydrogel at mucus pH (pH 7.4) make it best suitable candidate for the development of such type of delivery systems. It was observed from the results that on increasing the concentration of HPMC imparts clarity to the formulation without affecting its viscosity. When the two polymers were mixed in equal concentration (0.25% each) the formulation become very slight turbid at pH 7.4. Chitosan is insoluble at neutral or alkaline pH and converted in to gel when the pH of the formulation is raised and resulted in sudden increases in the viscosity. 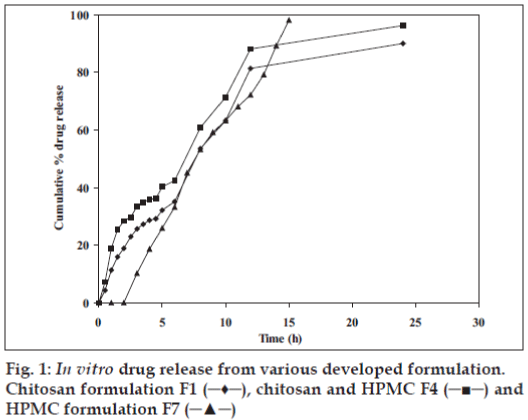 For packing the formulations the amber colored bottle closed with rubber closure and dropper with teat were used and found to be appropriate packaging system for current formulation. The packaging material was tested for resistance for autoclaving, leakage and pourability. Packages passed all the tests and proved to be a good choice for packaging of present formulation.

In sterility testing, no microbial growth/ turbidity was observed up to 14 days of incubation at 30° to 35° in case of fluid thioglycolate medium and at 20° to 25° in the case of soyabean-casein digest medium. Hence the formulation passed the sterility test. According to ICH guidelines for stability studies, graph was plotted between time (in days) and drug remaining in pack. Degradation constant (K) was calculated from the slope of line, which was found to be 3.07×10-4 days-1. As the amount of drug degraded in 90 days was 3.243%; therefore arbitrary shelf life of 2 y was assigned to the optimized formulation as the amount of degradation was less then 5%.

Studies revealed that the pH mediated in situ gelling system can be formulated using optimum concentration of chitosan and HPMC that can gel at mucus pH with prolong action of prilocaine HCl that may be helpful for periodontal anaesthesia, where lengthy procedure is required.