Photo- and Thermal Degradation of Piroxicam in Aqueous Solution

Piroxicam, 4-hydroxy-2-methyl-N-(2-pyridyl)-2H- 1,2-benzothiazine-3-carboxamide-1,1-dioxide) (fig. 1) belongs to the class of nonsteroidal antiinflammatory drugs (NSAIDs), which is structurally unrelated but pharmacologically similar to other NSAIDs [1]. A number of degradation products of piroxicam are reported in British Pharmacopoeia [2], including 2-aminopyridine, which has been identified as a hydrolytic product by some workers [3,4]. The hydrolysis of cinnoxicam follows a pseudo-first order reaction as a function of temperature [5]. Some studies on the thermal degradation [5-7] and photodegradation [8-10] of piroxicam have been conducted in the solid state and in aqueous solution. 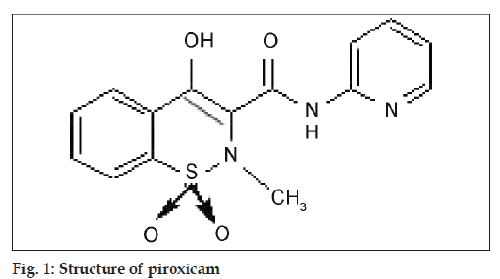 In the present work the degradation of piroxicam over a wide pH range under the influence of heat, light and buffers has been studied and the kinetics of theses reactions evaluated. The relation of rates of degradation with pH has been developed and the pH of maximum stability has been reported.

All absorbance measurements were made on a Shimadzu UV/Vis model UV-1601 spectrophotometer (range 190-1100 nm).

The assay of piroxicam in pure and degraded solutions was carried out by a previously reported method [11], according to the following procedure: A 0.6 ml of the degraded solution was placed in a 10 ml volumetric flask, 8 ml of acidified 1,10– phenanthroline solution was added, the pH was adjusted to 3.5 with 0.5M NaOH/HCl and the solution made up to volume. The contents were mixed, allowed to stand for 25 min. at room temperature and the absorbance measured at 510 nm. The concentration of piroxicam in the degraded solutions was determined using a calibration curve (fig. 2). The validity of Beer’s law was confirmed in the concentration range used for the assay. 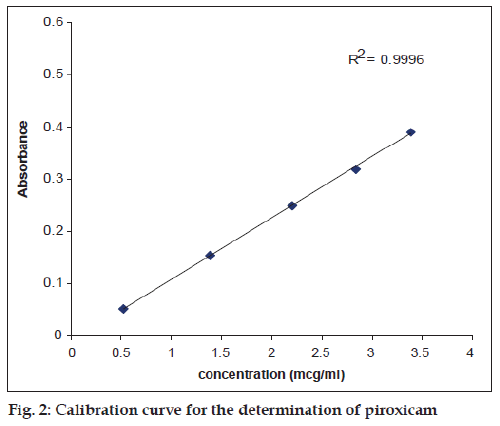 Figure 2: Calibration curve for the determination of piroxicam

A 10 ml aliquot of piroxicam solution (3.31 mg) was placed in a 250 ml beaker and diluted to almost 80 ml. The pH of the solution was adjusted to the desired value (2.0-12.0) with appropriate buffer. The solution was transferred to a 100 ml volumetric flask, made up to volume with the buffer and irradiated with a Philips 30 W TUV- tube fixed horizontally at a distance of 30 cm from the centre of the flask. Samples were withdrawn at appropriate intervals for spectrophotometric assay.

A volumetric flask containing 3.31 mg/100 ml solution of piroxicam, adjusted to the desired pH value (2.0-12.0) with appropriate buffer, was placed in a thermostat water bath and heated to 100°. Samples were withdrawn at appropriate intervals, cooled to room temperature and assayed for piroxicam content.

Piroxicam shows absorption maxima at 242 nm (0.1 M HCl), and 256, 290 and 358 nm (methanol) [12]. Photochemical degradation of piroxicam solution at pH 2.0 (maximum degradation) showed absorption maxima at 242 and 356 nm [12], which gradually decreased with time, indicating the degradation of piroxicam on UV exposure. However, after 3 h the spectrum was almost stable in the 270-330 nm region. Similar spectral changes were observed in piroxicam solutions degraded in neutral and alkaline solutions.

First-order plots of log concentration versus time for the photochemical reactions (pH 2.0-12.0) showed good linearity within a range of 20-50% loss of piroxicam (fig. 3) and the rates were found to be affected by the pH of the solution (Table 1). The rate-pH profile for the photodegradation of piroxicam is U-shaped which shows that the photodegradation may undergo specific acid-base catalysis. This results in an increase in the rate with a decrease in pH in the acid region and with an increase of rate in pH in the alkaline region. The almost constant photodegradation rate between pH 4 and 6 appears to be due to the solvent catalytic effect that is, the un-ionized watercatalyzed reaction (Table 1, fig. 4). The rate law for the acid-base catalyzed reaction may be written as: Kobs=k0+k1[H+]+[OH−]. At low pH, the term k1 [H+] is greater and specific hydrogen ion catalysis is observed. Similarly at high pH, the concentration of [OH−] is greater and specific hydroxyl ion catalysis is observed. 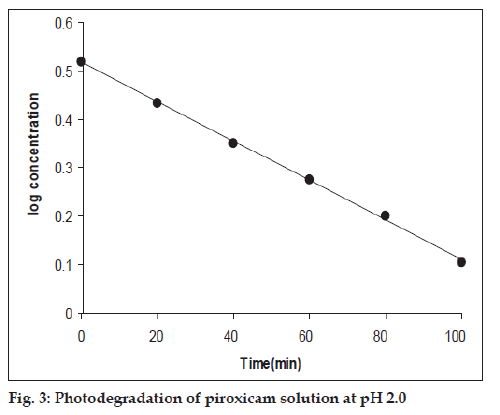 Table 1: Apparent first-order rate constants For the photo-degradation of piroxicam at Ph 2.0-12.0 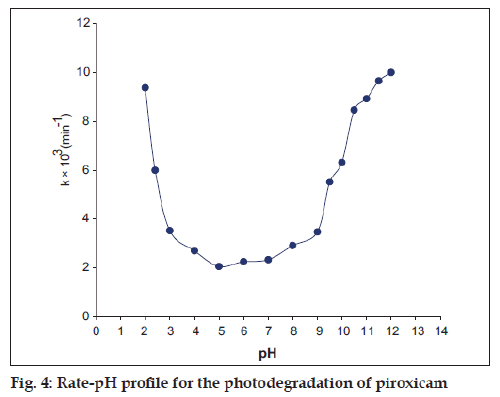 Figure 4: Rate-pH profile for the photodegradation of piroxicam

Many drugs undergo degradation to give U-shaped rate-pH profiles; such profiles have been observed for the degradation of penicillin [13], cytarabine [14], amphotericin B [15], carbenicillin [16], cyanocobalamin [17], and diltiazem [18].

The spectral changes in the absorption spectra of piroxicam solution (pH 6.0) on heating at 100° for two hours showed a gradual loss of absorbance around 356 and 250 nm indicating degradation of the molecule to unknown products. The degradation may be due to the hydrolysis of piroxicam by cleavage of the amide bond attached to the 2-pyridine ring [3,4] and the resultant absorption in the 200-400 nm regions. Similar changes were observed at other pH values.

The thermal degradation of piroxicam solution carried out at pH range 2.0-12.0 also followed firstorder kinetics (fig. 5). The apparent first-order rate constants for the reactions are reported in Table 2. 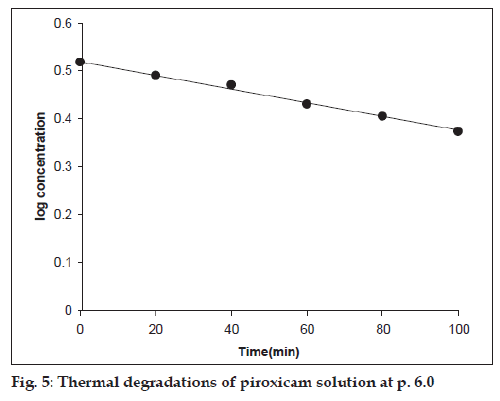 Table 2: Apparent first-order rate constants For the thermal degradation of piroxicam at Ph 2.0-12.0 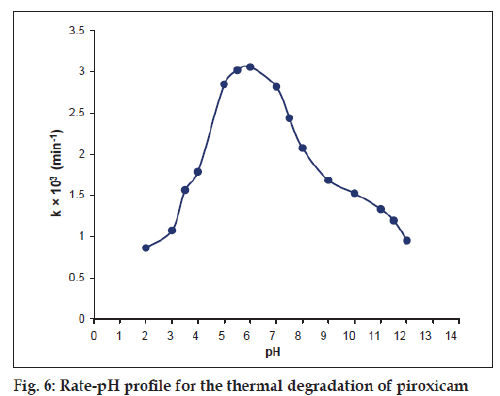 Figure 6: Rate-pH profile for the thermal degradation of piroxicam

Examples of bell-shaped pH-rate profiles include the hydrolysis of estrone phosphate[20], dicarbazine [21], hydrochlorothiazide [22], tyrphostins [23] and decarboxylation of 4-aminosalicylic acid [24].

Table 3: Apparent first-order rate constants For the thermal degradation of piroxicam at Ph 5.6 in the presence of acetate ions 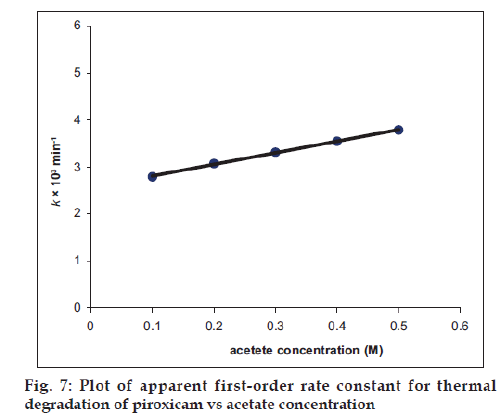 I (U.N.) wish to express my feelings of thanks to Prof. Dr. S. Fazal Hussain, C.E.O and Dr. Shaukat Khalid, Acting Dean, Baqai Institute of Pharmaceutical Sciences, Baqai Medical University, Karachi who provided me the necessary research facilities to carry out this research work.