Free radicals or reactive oxygen indices give rise to oxidative injury, which is a fundamental mechanism underlying a number of disease like diabetes, cancer, neurodegenerative disorders. Deleterious effects of reactive oxygen species can be nullified by using different natural antioxidants derived from plants Indigofera tinctoria is such plant. This study was planned in order to trace and determine the antioxidant capability of Indigofera tinctoria. All the reagents and chemicals used in this study were obtained from reliable firms. The plant extracts were subjected to phytochemical screening, quantitative assays and antioxidant profiling. The results suggested that plant extracts contained all pharmacologically important phytoconstituents in appreciable amounts and having excellent antioxidant capabilities.

Medicinal plants are highly conventional and one of the foremost sources of novel medicinal therapeutics due to the presence of various bioactive components or phytochemicals[1,2]. Most of these components are antioxidant in nature. The antioxidants from plants usually are secondary metabolites that have the ability to cope up oxidative stress resulted by the reactive oxygen species (ROS). These antioxidants produced in the plant as a result for their own defense mechanisms. From the past two or three decades, a number of medicinally important plants have been studied for their ability of neutralizing specific ROS, as the hydroxyl radical, the superoxide radicals, nitric oxide radicals[3].

India is a hub of such pharmacologically important known medicinal plants. Indigofera tinctoria belongs to the family Fabaceae and is an annual herb with a height of 4-6 feet. It is cultivated in India, China and other countries as a source of dyeing agent i.e. indigo. The herb is extensively used in the Indian system of medicine for neurological disorders, epilepsy, bronchitis and hepatic ailments[4].

Collection and processing of plant material

Botanically identified, experimental plant was procured from SM Heena Industries, Rajasthan. The plant was shade dried, milled to coarse powder. 40 g of plant material was placed in soxhlet thimble and was refluxed with solvents for 48-72 at 40-60º to obtain sequential methanol and nonsequential hydromethanol extracts. Extracts were collected and cooled at room temperature and poured in china dishes and then evaporated at 40º using hot air oven. Dried extracts were kept in desiccators for two days and stored at 5º in air tight containers. For the various assays, plant extracts were prepared with a concentration of 1 mg/ml.

Freshly prepared plant extract and gallic acid standard were treated with 1 ml of folin ciocalteu’s reagent and mixed well. After 5 min, 4 ml of 7% Na2CO3 solution and 4 ml distilled water was added to it. This reaction mixture was incubated for 90 min in dark and then centrifuged at 10 000 rpm for 5 min. The supernatant was taken and its absorbance was recorded at 750 nm and the total phenolic content was expressed as mg gallic acid equivalent (GAE) per g of plant sample (fig. 1 and Table 2)[9].

Sample and standard (saponin) were treated with 400 μl vanillin-acetic acid reagent and 1.6 ml of perchloric acid. This reaction mixture was kept on water bath at 70-75° for several min. It was than cooled on ice bath for 2 min and 2.5 ml of glacial acetic acid was poured into it. Absorbance was taken at 550 nm after mixing it well. The total saponin content was expressed as mg sapogenin equivalent (SE) per g of plant sample (fig. 2 and Table 2)[10].

To 0.5 ml sample and standard (rutin), 2 ml distilled water and 0.15 ml 5% NaNO2 solution were added. After 6 min, 0.15 ml 10% AlCl3 solution was added and kept for another 6 min. To this reaction mixture, 2 ml 4% NaOH solution and 0.2 ml water was added to make up the final volume 5 ml. The reaction mixture was mixed well and allowed to stand for 15 min after which absorbance was recorded at 510 nm. Total flavonoid content was expressed as mg rutin equivalent (RE)/g plant sample (fig. 3 and Table 2)[11].

Sample and standard (tannic acid) were diluted with 8 ml distilled water and added 6.5 ml Folin–Ciocalteu reagent, 1.5 ml 20% Na2CO3 solution was to them. Absorbance was recorded at 775 nm and its content was expressed as mg tannic acid equivalents (TAE) per g of plant sample (fig. 4 and Table 2)[12]. 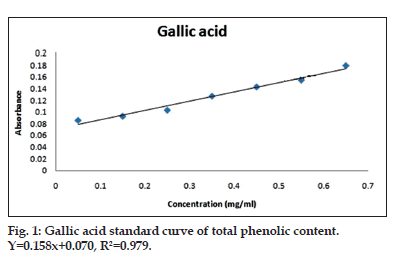 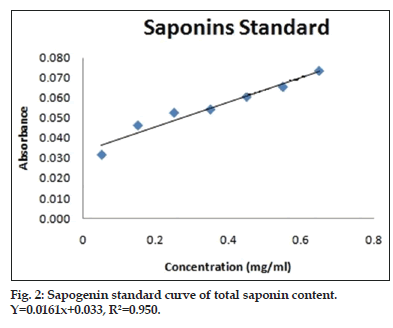 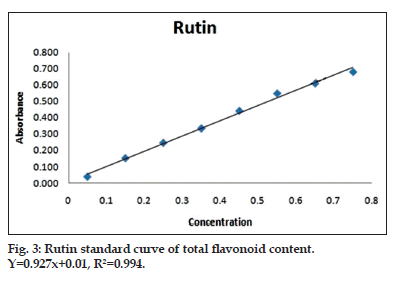 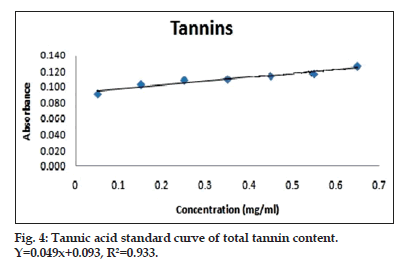 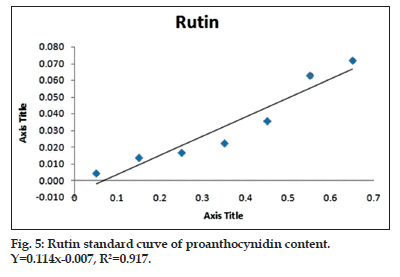 Phytochemical investigation of the methanol and hydromethanol extract of Indigofera tinctoria revealed the occurrence of pharmacologically important phytoconstituents as flavonoids, saponins, glycosides, steroids, tannins and phenols. Alkaloids were found to be absent in hydromethanol extract while present in low amount in methanol extract. Both extracts were also found to possess amino acids, proteins and carbohydrates. Flavonoids produced in plants due to microbial response. They are most potent and excellent antioxidants possess the capability of acting as anticancer agents[22]. Saponins, which have hemolytic and antiinflammatory ability, were also present in both extracts[23]. Plant extracts also possess glycosides, which are known to lower the blood pressure[24]. Steroids have been reported to have antibacterial activity[25] and antidiarrhoeal activity as it increase intestinal absorption sodium ions and water[26].

The total phenolic content in methanol content was 207.69 mg/g of dry weight of extract and 210.62 mg/g of dry weight for hydromethanol extract. Such amount of phenolic components is able to scavenge free radicals by donating active hydrogen and thus help reducing the detrimental effects of oxidative stress. This property of plant phenolic makes them a key group of compounds that perform as free radical scavengers or primary antioxidants. Total saponin content was 89.9 mg/g for methanol extract and 87.5 mg/g for the hydromethanol extract.

Flavonoid content was found to be 96.4 mg/g of dry weight for methanol extract and 104.16 mg/g of dry weight for hydro methanol extract. Flavonoids are chemically characterized by two benzene rings joined by a linear carbon chain. Various reports indicate that regular flavonoids may trim down the risk of several chronic diseases including neurodegenerative diseases, atherosclerosis, and cancer[27]. The flavonoids also reported to have antiviral, antiallergic, antiplatelet and antiinflammatory properties.

Tannins are phenolic compounds having antioxidant and antibacterial properties and also have ability to form complexes with macromolecules and metal ion[28]. The amount of tannins present in methanol and hydromethanol extract was 229 and 230 mg/g of dry weight of respective extracts.

Acid butanol assay is used to determine the total proanthocynidin content and it was observed this is an easy, simple and rapid test. Total proanthocynidin content was 6.107 mg/g of dry weight of extract in methanol extract and 7.17 mg/g of dry weight of extract in hydro methanol extract. Literature have indicated that proanthocynidins exhibit antimicrobial, anticarcinogenic and DPPH test present information on the reactivity of the test sample with a stable free radical entity. DPPH gives a strong absorption band in visible spectrum at 517 nm wavelength. When an odd electron becomes paired off in the presence of a free radical scavenging agent, the DPPH solution is decolorized and its color changes from deep violet to light yellow as the absorption reduces. The degree of reduction in absorbance measurement is pinpointing of the antioxidant ability of the sample extract. To scavenge DPPH radicals, inhibition concentration of methanol extract was 0.709 and 0.881 mg/ml of hydromethanol extract, which was found to be much higher when compared to the IC50 of tocopherol standard (0.94 mg/ml) (Table 3).

FRAP is an excellent method in order to determine the free radical scavenging activity. Low pH causes reduction of ferric-TPTZ to ferrous-TPTZ, which gives an intense blue color, measured at 593 nm using spectrophometer. The FRAP value for methanol extract and hydromethanol extract were 10.807 and 18.256 mM Fe (II) ions/mg of plant extracts (Table 3).

Table 3: Antioxidant Assays Of Methanol And Hydromethanol Extracts Of Indigoferatincoria.

Metal chelating capacity is important as it reduce the concentration of transition metals as iron, which accelerate rate of lipid peroxidation by fenton reaction. According to the results, the plant extracts showed good metal chelating activity. IC50 values of 0.75 and 0.39 mg/ml were observed for metal chelating capacity, respectively in methanol and hydromethanol extract. The standard EDTA IC50 value was 0.29 mg/ml (Table 3).

Reducing power for methanol extract was found to be 2494.74 mg/g of plant extract and 2803 mg/g plant extract for hydromethanol extract of Indigofera tinctoria. Like the antioxidant activity, the reducing power increased with increasing amount of the extract. For the measurement of the reductive ability, the Fe3+-Fe2+ transformation was investigated in presence of the extract. Presence of various antioxidants results in the reduction of the ferricyanide complex to the ferrous form (Table 3).

In biological systems, nitric oxide (NO) plays a potent role of physiological process such as smooth muscle relaxation, neuronal signalling, inhibition of platelet aggregation and regulation of cell mediated toxicity. It is a diffusible free radical, which plays many roles as an effector molecule in diverse biological systems including neuronal messenger, vasodilation and antimicrobial and antitumor activities. IC50 values of 0.035 mg/ml for nitric oxide radical scavenging activity was observed for both methanol and hydromethanol extract (Table 3).

This study put forwarded that methanol and hydromethanol extracts of Indigofera tinctoria possess antioxidant properties when compared with the ability of well exemplified and widely used antioxidant standards. The high potential of being good antioxidant and free radical scavengers of these two extracts of Indigofera tinctoria is due to the presence of phytoconstituents, which possess a number of therapeutic and pharmacological properties and are promising source of herbal medicinal cure of various ailments including cancers and neurogenerative disorders.

The studies are further warranted for the isolation and structural characterization of these phytoconstituents present in the plant extract. Furthermore, in vivo studies are also needed to be performed in order to under the mechanism of action of these antioxidant components and before the access to preceding clinical trials.