Phytochemical and pharmacological investigation of flowers of hibiscus rosasinensis linn

The flowers of Hibiscus rosasinensis Linn. were extracted with three solvents. The extracts were dried and studied for their hypotensive activity. Among the crude extracts, hydroalcoholic extract was found to show most significant activity with reference to the standard minoxidil. Four new phytoconstituents were isolated from hydroalcoholic extract when a study was made to isolate the active constituents responsible for the exhibited activity. The structures of these constituents were assigned on the basis of their IR, NMR and mass spectral data.

Hibiscus rosasinensis Linn. (Family Malvaceae) is a plant with flowers widely distributed throughout the world. As a traditional medicine, the fresh juice of the wild flowers is used to treat gonorrhea, the powdered roots are used to treat menorrhagia, and the infusion of the petals is used as a refrigerant drink in fevers [1]. The alcoholic extract of flowers of H. sabdariffa inhibited Angiotensin-I converting enzyme [2]. The alcoholic extract of flowers of H. rosasinesis has been proved to possess anticonvulsant property [3]. Powdered leaves of H. rosasinensis showed lowering of blood pressure [4]. In spite of its use in cardiovascular ailments, the hypotensive activity of the flowers of H. rosasinesis has not been explored. Prompted by these findings, in the present study various extracts of flowers of H. rosasinesis have been prepared and studied for their hypotensive activity. In continuation of our previous studies to isolate the active constituent(s) responsible for this activity, four new phytoconstituents were isolated, which are not reported in the literature [5-10], and their chemical structures were characterized by spectral data (IR, NMR and Mass spectra).

Flowers including buds of H. rosasinensis were collected from Japanese Garden, Rohini, New Delhi, in August 2002. They were authenticated by the Department of Botany, Jamia Hamdard, New Delhi. A voucher specimen has been kept in our laboratory for reference.

Hydroalcoholic extract obtained from the flowers of H. rosasinensis was adsorbed on silica gel (60-120 mesh) for column chromatography. The slurry was air-dried to remove any adsorbed moisture on surface and loaded on the top of the column of silica gel packed with petroleum ether. The polarity of the column solvent was gradually increased with the disappearance/appearance of the existing/new spot, visualized on tlc.

The mass spectrum showed a molecular ion peak at m/z 412 [M]+ corresponding to the molecular formula C26H52O3. The ion peak at m/z 341 was observed due to loss of C2H5CO+ fragments. This peak also suggested the presence of keto group at C-3 Position. The ion peaks at m/z 341, 281 and 131 indicated the presence of two hydroxyl groups at C-20 and C-21 position. On the basis of the above spectral data analyses, the structure of compound I was formulated as n-hexacosa-3-one-20,21- diol.

Elution of column with benzene:chloroform (1:3) afforded compound II as cream coloured flakes. Its molecular formula was found to be C30H62 (m/z 422, [M]+). Its IR spectrum did not show any absorption band in functional group region. The NMR spectrum of compound II displayed two three-proton triplets at δ 0.85 (J=8.9 Hz) and 0.87 (J=7.0 Hz) assigned to terminal C-1 and C-30 methyl protons respectively. A broad signal at δ 1.25 for 54 protons was associated to 27 methylene protons. A twoproton signal at δ 1.56 corresponded to two protons of methylene group. The mass spectrum of compound II exhibited the molecular ion peak at m/z 422 [M]+ (5.6) corresponding to the molecular formula C30H62. On the basis of the above spectral data, the structure of compound II was characterized as n-triacontane.

The mass spectrum of compound III displayed a molecular ion peak at m/z 436 [M]+ corresponding to the molecular formula C30H60O. The mass fragmentation showed ion peaks at m/z 239 [M-C14G29]+ and 211 [MC 14H29CO]+, suggesting the presence of the carbonyl functional group at C-15. A prominent ion peak at m/z 197 was generated due to CH3(CH2)13 + fragment (Scheme 2). On the basis of the above spectral data, the structure of compound III has been elucidated as n-triacontan-15- one.

The Institutional Animal Ethics Committee of Jamia Hamdard, Hamdard University, approved the protocol used for experiments. The crude extracts and isolated compounds were evaluated for hypotensive activity. Student-t-test was performed for exhibited activities to ascertain the significance. Adult Wistar albino rats of either sex, weighing 200-250 g, were used for the screening of extracts for hypotensive activity. The animals were maintained in colony cages at 25±2°, relative humidity of 45-55%, under 12 h light and dark cycle and were fed with standard animal feed. All the animals were acclimatized for a week before use. Various extracts, viz., petroleum ether, chloroform and ethanol-water (7:3) extract of the flowers of H. rosasinensis Linn. were tested for hypotensive activity in normotensive rats, noninvasively, by tail-and-cuff method using LE 5001 Pressure Meter11. Suspension of all the three extracts was prepared by using 1% sodium carboxymethyl cellulose and was administered orally at dose levels 50, 100 and 200 mg/kg of animal body weight to different groups of rats, each containing five. Control group received an equivalent quantity of sodium carboxymethyl cellulose suspension. Blood pressure was measured in stepwise manner as follows. After 3 h of administration of the extract, the animal was shifted to the restrainer, which restricts the movement of animal. The tail was cleaned with moist cotton to remove the dirty matter and cotton to remove the dirty material, and talcum powder was sprayed on the tail to make its surface smooth. A tail-cuff and pulse transducer was fixed around the tail. Initially, the animal showed a particular pulse level. When this pulse rate was within the normal range, the start button was pressed, initiating recording of systolic BP, diastolic BP and mean arterial BP that was displayed on monitor. The pressure can be easily read from the precaliberated monitor. Once all the values were displayed, the recorder was switched off, and for the next measurement, the same procedure was followed, once sufficient pulse level was attained. Percent reduction in blood pressure was calculated in comparison to minoxidil, which was used as standard, at the same dose levels. Results were analyzed by using student’s t-test. Percent reduction in blood pressure after administration of the extracts are shown in Table 1. The same procedure was adopted for determining percent reduction in blood pressure for isolated constituents, and the results are depicted in Table 2. 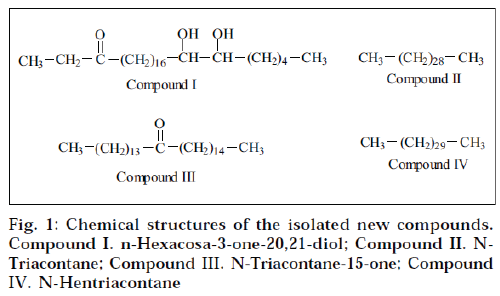