Herbal medicine plays vital role in maintaining the health and wealth of mankind. Majority of world population use herbal medicines. The World Health Organization (WHO) reports that approximately 21,000 plants have been used for medicinal purposes [1]. Herbs have stood the test of time for their safety, efficacy, cultural acceptability and minimal side effects [2]. Therapeutic power of some plants is mainly due to the presence of some secondary metabolites, which collectively are referred to as phytochemicals [3]. These phytochemicals have potential to be developed as herbal medicines or could serve as precursors for modern medicine.

It is now widely understiood that free radicals are involved in the pathogenesis of many diseases. Natural defence mecanisms of the human body prevents development of these diseases but in cases of increased onslaught by free radicals and reactive oxygen species bodys defence mechanisms needs to be supplemented by external antioxidants. Synthetic antioxidants are less favoured due to their side effects, hence interest in natural antioxidants of herbal origin is on the increase [4]. Plant-derived phenolic compounds and flavonoids have been reported to be radical scavengers and act as good antioxidant agents.

Fresh leaves of D. reflexa were collected from Dehradun district of Uttarakhand, India. The plant material was authenticated by the Botanical Survey of India, Dehradun. A herbarium smple (accession No. 114095) was also preserved in the Department of Chemistry, Kanya Gurukula Campus, Gurukula Kangri Vishwavidyalaya, Haridwar, India for further reference. Fresh leaves were washed with water, dried under the shade for 15 days, crushed in a grinder to powder form and then stored in an air tight container for further extraction and various processes.

One hundred and fifty grams of the dried powdered leaves of D. reflexa were weighed, loaded and extracted in a soxhlet apparatus using 1.5 l each of petroleum ether, dichloromethane, methanol and water successively in accordance to the hierarchy of polarity of solvents. Extraction was continued for 72 h or until the solvent coming out of the siphoning tube was colourless [15]. Extracts were concentrated under reduced pressure in rotary vacuum evaporator and refrigerated for further use.

Phytochemical analysis of the extracts was performed using standard qualitative methods [16,17]. The extracts were analysed for the presence of compounds like alkaloids, flavonoids, tannins, glycosides, terpenoids, steroids, fat and oil, saponins, protein. Total phenol content (TPC) of Dracaena reflexa leaf extract was measured by employed the method of Singleton [18]. To 1 ml of extract (1000 μg/ml) in methanol, 10 ml of 10% Folin Ciocalteu reagent and 8 ml of sodium carbonate (7.5% w/v) solution was added and the reaction volume was made up to 20 ml with distilled water. After 2 h of incubation at room temperature, absorbance was measured at 765 nm on a UV/Vis spectrophotometer. Total phenolics were quantified by calibration curve of gallic acid (25-300 μg/ml). The phenolic content of the sample was expressed as milligram gallic acid equivalents/gram of dry extract (mg GAE/g), which was calculated using the formula [19], T=C×V/M, where, T is the TPC (mg/g of plant extract in GAE), C is the concentration of gallic acid from the calibration curve, V is the volume of the extract in ml and M is the weight of the pure plant extracts.

The free radical scavenging activity of the plant extract was determined using Brand and William method with a slight modification [20]. Reaction mixture contained 1 ml of extract of different concentrations (0.1 to 4 mg/ml) and 3 ml of working DPPH in methanol (0.004%). After 30 min of incubation at room temperature in a dark place, the absorbance was measured at 517 nm against methanol as blank on a UV/Vis spectrophotometer. Methanol with DPPH solution was used as control. Percent inhibition of free radical DPPH was calculated as per the formula, % inhibition=(absorbance of the control−absorbance of sample)/absorbance of control)×100. Results were expressed as IC50 the concentration producing 50 % inhibition, which was obtained from the graph plotted between concentrations versus % inhibition.

Ferric reducing antioxidant power (FRAP) value was calculated using the method of Benzie and Strain [21], which was based on reduction of Fe3+TPTZ to Fe2+TPTZ. The FRAP reagent was prepared mixing 300 mM acetate buffer (pH=3.6), 10 mM TPTZ and 200 mM FeCl3.6H2O in a ratio of 10:1:1 at 37°. The reaction mixture contained 1 ml of extract (1500 μg/ml) and 10 ml of working FRAP reagent. The mixture was incubated at 37° for 30 min. The antioxidant potential of samples was determined from standard curve plotted using ascorbic acid in the concentration range between 0-600 μM/ml. One millilitre of methanol in 10 ml of working FRAP reagent was the control and working FRAP reagent served as the blank. Results were expressed in μM/ml and FRAP value of sample is calculated using the formula, FRAP=(absorbance of sample/absorbance of statndard)×100.

Petroleum ether, dichloromethane, methanol and aqueous extracts were prepared to perform phytochemical screening, proximate analysis, total phenolic content and antioxidant activity. Results of proximate analysis are demonstrated in Table 1. The results revealed that leaves of Dracaena reflexa are a good source of mineral elements as they contained a high percentage of ash. Moisture content is in the range of 5-15% indicated that leaves are good for formulating because low moisture content prevented microbial growth [22]. Leaves also appeared to be a good supplement for protein, carbohydrate and fat, which are the major building blocks of nutrition [23]. Leaves also could provide high energy content as the nutritive value is much higher. Collectively proximate analysis showed that leaves of Dracaena reflexa have the potential to be a food supplement, energy drink and a neutraceutical.

Values are expressed as mean±SD of the three replicates. *Nutritive value is calculated in kcal/100 g dry weight of leaves. SD: Standard deviation

Phytochemicals present in leaves of D. reflexa were shown in Table 2. Leaves of D. reflexa were found to be a rich source of alkaloids, flavonoids, saponins, glycosides, carbohydrate, amino acids, terpenoids, tannins, steroids, triterpenoids, fat and oil. Some of the major constituents like alkaloids contribute towards analgesic and antimicrobial activity [24]. Flavonoids and tannins are major groups which act as antioxidant. Tannins also reported to have antibacterial properties [25]. Glycosides are likely to possess cardiac activities and might be useful in treating congestive heart failure and cardiac arrhythmia [26]. Saponins are likely to demonstrate antibacterial, antiinflammatory, anticancer, and antidiabetic activities. Terpenoids have been reported to be antibacterial in nature [27]. Presence of all these phytochemical in leaves might contribute towards the therapeutic potential of D. reflexa.

TPC gives a measure of to what extent phenolic compounds are present in the extract. In plants usually tannins, flavonoids, phenolic acids and phenol diterpenes contributes to TPC. Phenol group offers potent antioxidant activity due to its redox potential, which plays an important role in scavenging free radicals, in neutralizing the reactive oxygen species or act as a electron donor to peroxide radical [28]. As the D. reflexa leaf methanol extract showed higher TPC, it is likely to be a potential antioxidant. TPC content of the extracts are summarized in Table 3.

mg GAE/g means milligram of extract equivalent to gallic acid per gram of dry weight of extract. Values are expressed as mean±SD of the three replicates. SD: Standard deviation

Plants with potent antioxidant properties are reported to exhibit freeradical scavenging activity. DPPH is a stable free radical, which gives purple colour in methanol solutions. This purple colour changes to yellow colour if the DPPH free radical is scavenged by donating either hydrogen radical or any alkyl radical. So plants secondary metabolites which have tendency to donate radical exhibit the good antioxidant power [29]. The D. reflexa leaf methanol extract showed very high free radical scavenging property as evidenced from the IC50 values obtained. Here a direct correlation can be demonstrated between the TPC and free radical scavenging property exhibited by the methanol extract graph of % inhibition versus concentrations showing comparison with standard BHT is demonstrated in fig. 1 and IC50 of different extract is listed in Table 4. 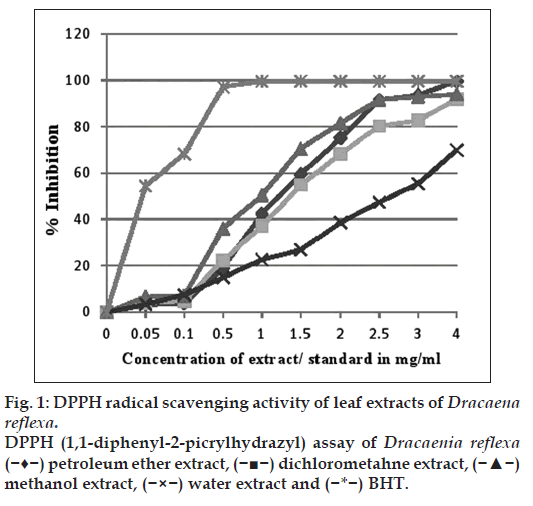 FRAP assay mainly measures the reducing potential of an antioxidant reacting with Fe3+ TPTZ and producing a coloured Fe2+ TPTZ complex. The reducing power of any compound or phytochemical is due to its ability to donate hydrogen atom or an electron to the metal atom. FRAP assay treats the antioxidants in a plant sample as a reducing agent in a colorimetric reaction. The reducing power of a plant is not only due to the presence of H atom donating ability but also due to presence of methoxy and keto groups, triterpenes and acid group [30]. FRAP values are given in Table 5.

The results obtained in this study clearly showed that leaf extracts of Dracaena reflexa possessed antioxidant activity and the results of proximate analysis support the use of the leaves as a food supplement.