Plantago ovata mucilage in the design of fast disintegrating tablets

In the present work, fast disintegrating tablets of prochlorperazine maleate were designed with a view to enhance patient compliance by direct compression method. In this method mucilage of Plantago ovata and crospovidone were used as superdisintegrants (2-8% w/w) along with microcrystalline cellulose (20-60% w/w) and directly compressible mannitol (Pearlitol SD 200) to enhance mouth feel. The prepared batches of tablets were evaluated for hardness, friability, drug content uniformity, wetting time, water absorption ratio and in vitro dispersion time. Based on in vitro dispersion time (approximately 8 s), the two formulations were tested for the in vitro drug release pattern (in pH 6.8 phosphate buffer), short-term stability (at 40º/75% relative humidity for 3 mo) and drug-excipient interaction (IR spectroscopy). Among the two promising formulations, the formulation prepared by using 8% w/w of Plantago ovata mucilage and 60% w/w of microcrystalline cellulose emerged as the overall best formulation (t 50% 3.3 min) based on the in vitro drug release characteristics compared to conventional commercial tablets formulation (t 50% 17.4 min). Short-term stability studies on the formulations indicated that there are no significant changes in drug content and in vitro dispersion time (p<0.05).

Mucilage is most commonly used as adjuvant in the manufacturing of different pharmaceutical dosage forms. They possess a variety of pharmaceutical properties, which include binding, disintegrating, suspending, emulsifying and sustaining properties at different proportion in different pharmaceutical dosage forms[1-4]. Natural mucilages are preferred over semi-synthetic and synthetic materials due to their non-toxic, low cost, free availability, emollient and non-irritating nature[5,6]. Ispaghula mucilage consists of epidermis of the dried seeds of Plantago ovata. The present work was carried out to study the disintegrant property of Plantago ovata mucilage in comparison with crospovidone by formulating fast disintegrating tablets of prochlorperazine maleate.

Many patients express difficulty in swallowing tablets and hard gelatin capsules, tending to non-compliance and ineffective therapy[7]. Recent advances in novel drug delivery systems (NDDS) aim to enhance safety and efficacy of drug molecule by formulating a convenient dosage form for administration and to achieve better patient compliance. One such approach is fast disintegrating tablets[7-10]. Prochlorperazine maleate (PCZM) is a phenothiazine antipsychotic and widely used in prevention and treatment of nausea, vomiting including that associated with migraine or drug-induced emesis[11]. The concept of formulating fast disintegrating tablets containing prochlorperazine maleate offers a suitable and practical approach in serving desired objective of faster disintegration and dissolution characteristics with potential increased bioavailability.

For the isolation of mucilage[6,12], seeds of Plantago ovata were used. They were soaked in distilled water for 48 h and then boiled for 1 h for complete release of mucilage into water. The material was filtered by squeezing in a muslin cloth to remove marc. Then equal volume of acetone was added to filtrate to precipitate the mucilage. The mucilage was separated and dried in oven at a temperature less than 60º, powdered (#60 mesh), weighed and stored in desiccator until further use.

Fast disintegrating tablets of prochlorperazine maleate were prepared by direct compression method[13] according to the formulae given in Table 1. All the ingredients were passed through #60 mesh separately. The drug and MCC were mixed by taking small portion of both each time and blending it to get a uniform mixture and kept aside. Then the other ingredients were weighed and mixed in geometrical order and tablets were compressed using 7 mm round flat punches to get tablets of 150 mg weight on a 10-station rotary tablet machine (Clit, Ahmedabad). A batch of 60 tablets was prepared for all the designed formulations.

Twenty tablets were selected at random and weighed individually. The individual weights were compared with the average weight for determination of weight variation[14]. Hardness and friability of the tablets were determined by using Monsanto Hardness Tester and Roche friabilator, respectively. For content uniformity test, ten tablets were weighed and powdered. The powder equivalent to 5 mg of PCZM was extracted into methanol and liquid was filtered (Whatman No. 1 filter paper). The PCZM content in the filtrate was determined by measuring the absorbance at 254.5 nm after appropriate dilution with methanol. The drug content was determined using the standard calibration curve. The mean percent drug content was calculated as an average of three determinations[15]. For determination of wetting time and water absorption ratio[16], a piece of tissue paper folded twice was placed in a small Petri dish (internal diameter of 5 cm) containing 6 ml of water. A tablet was placed on the paper and the time required for complete wetting was measured. The wetted tablet was then weighed. Water absorption ratio ‘R’ was calculated using the equation: R=100×(Wa–Wb)/Wa, where Wa is weight of tablet after water absorption and Wb is weight of tablet before water absorption. For determination of in vitro dispersion time, one tablet was placed in a beaker containing 10 ml of pH 6.8 phosphate buffer at 37±0.5º and the time required for complete dispersion was determined[17]. IR spectra of PCZM and its formulations were obtained by KBr pellet method using Perkin- Elmer FTIR series (Model 1615) spectrophotometer in order to rule out drug-carrier interactions.

In vitro dissolution of PCZM fast disintegrating tablets was studied in USP XXIII type-II dissolution apparatus (Electrolab, Model-TDT 06N) employing a paddle stirrer at 50 rpm using 900 ml of pH 6.8 phosphate buffer at 37±0.5º as dissolution medium. One tablet was used in each test. Aliquots of dissolution medium (5 ml) were withdrawn at specified intervals of time and analyzed for drug content by measuring the absorbance at 255.5 nm. The volume withdrawn at each time interval was replaced with fresh quantity of dissolution medium. Cumulative percent of PCZM released was calculated and plotted against time.

Short-term stability studies on the promising formulations (DPM4 and DCP4) were carried out by storing the tablets in an amber coloured rubber stoppered vial at 40º/75% RH over a 3 mo period. At an interval of 1 mo, the tablets were visually examined for any physical changes, changes in drug content and in vitro dispersion time.

Fast disintegrating tablets of prochlorperazine maleate were prepared by direct compression method employing Plantago ovata mucilage and crospovidone as super-disintegrants in different ratios along with microcrystalline cellulose. Directly compressible mannitol (Pearlitol SD 200) was used as a diluent to enhance mouth feel. A total of eight formulations and a control formulation DC0 (without super-disintegrant) were designed. As the blends were free flowing (angle of repose <30º, and Carr’s index <15%) tablets obtained were of uniform weight (due to uniform die fill), with acceptable variations as per IP specification i.e., below ±7.5%. Drug content was found to be in the range of 95 to 101%, which is within acceptable limits. Hardness of the tablets was found to be about 2.63 kg/cm². Friability below 1% was an indication of good mechanical resistance of the tablets. Water absorption ratio and wetting time, which are important criteria for understanding the capacity of disintegrants to swell in presence of little amount of water were found to be in the range of 50-86% and 11-47 s, respectively. Among all the designed formulations, two formulations, viz., DPM4 and DCP4 were found to be promising and displayed an in vitro dispersion time ranging from 8 to 10 s, which facilitates their faster dispersion in the mouth.

Overall, the formulation DPM4 containing 8% w/w of Plantago ovata mucilage and 60% w/w of microcrystalline cellulose was found to be promising and has shown an in vitro dispersion time of 8 s, wetting time of 11 s and water absorption ratio of 86% when compared to control formulation (DC0) which shows 244 s, 247 s and 50% values respectively for the above parameters (Table 2). The experimental data also reveals that the results obtained from the Plantago ovata mucilage are comparable and even slightly better than those of crospovidone. 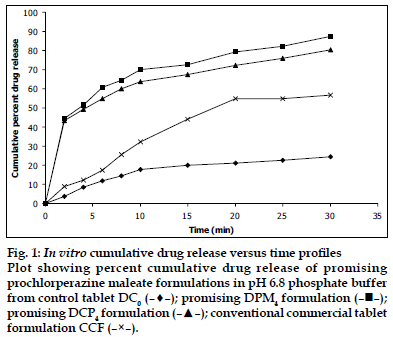 In vitro dissolution studies on the promising formulations (DPM4 and DCP4), the control (DC0) and commercial conventional formulations (CCF) were carried out in pH 6.8 phosphate buffer, and the various dissolution parameter values viz., percent drug dissolved in 5 min, 10 min and 15 min (D5, D10 and D15), dissolution efficiency at 10 min (DE10 min)[19], t50%, t70% and t90% are shown in Table 3 and the dissolution profiles depicted in fig. 1. This data reveals that overall, the formulation DPM4 has shown more than five-fold faster drug release (t50% 3.3 min) when compared to the commercial conventional tablet formulations of prochlorperazine maleate (t50% 17.4 min) and released nearly 4-times more drug than the control formulation in 10 min.

IR spectroscopic studies indicated that the drug is compatible with all the excipients. The IR spectrum of DPM4 and DCP4 showed all the characteristic peaks of prochlorperazine maleate pure drug, thus confirming that no interaction of drug occurred with the components of the formulation. Shortterm stability studies of the above formulations presented in Tables 4 and 5 indicated that there are no significant changes in drug content and in vitro dispersion time at the end of 3 mo period (p<0.05).

The authors are thankful to Mehta Pharmaceutical Industries, Mumbai for providing gift sample of Prochlorperazine maleate. They also wish to express their gratefulness to the Principal, HKE Society’s College of Pharmacy, Gulbarga for providing the necessary facilities for the study.