Preference of Herbal Therapies: Cost of Illness and Cost Benefit Analysis for Major Diseases in the City of Karachi, Pakistan

The aim of the present study was to assess and compare the allopathic and herbal therapies by carrying out cost of illness and cost benefit analysis after propagation of basic epidemiological and pharmacoeconomic data. The data was recorded from the patient for 3 major diseases, common cold, depression and trauma in all 178 union councils of the city of Karachi, Pakistan, rationalizing the benefits and hence proving the preference of herbal over allopathic therapy. The stratified random sampling (n=178) was used, selecting individual sets of 178 patients for each kind of therapy, utilizing data of epidemiology. The direct and indirect costs were calculated for therapies for selected diseases in patients. However, benefits were analyzed by developing uniform method of analysis of costs and benefits, comparing and propagating individual data of union councils on the city level. The differences in costs of illnesses between allopathic and herbal therapies were found to be: Rs.1.51/- billion (US$ 14.52/- million), 46.82/- billion (US$ 450.19/- million) for depression and Rs.0.14/- billion (Rs.140/- million or US$ 1.35/- million) in trauma, respectively. The herbal therapies were proved more effective than allopathic therapies, i.e. 29.85, 11.79 and 4.77 % in cases of common cold, depression and trauma.

Cost of illness (COI) or charges for illness analysis determines the cost incurred by the diseases or condition in the society in a point of time. Such costs can be classified as direct and indirect costs. The direct costs of illness are those directly and indirectly connected with the therapy; whereas, the indirect costs of illness are those that are not connected with the therapy but are related to the result of onset therapy for the disease. These are hard to be tracked and evaluated absenteeism from the job or voluntary support from a household associate or even in the form of losses due to the pain of illness[1].

On the other hand, cost benefit analysis (CBA) is an important pharmacoeconomic evaluation that determines benefits of the incurred costs of therapy. It is a basic instrument that can be used to advance the policymaking in the budgeting of healthcare plans. The methodology employed for calculating the benefit associated with the cost (in relation to the cost incurred for the therapy) can be tricky and difficult[2-12].

Present study is a part of detailed pharmacoeconomic evaluation for allopathic and herbal therapies practiced in the city of Karachi for three major diseases, such as common cold, depression and trauma (minor cut), involving patients belonging to 178 union councils. It utilizes simple methodologies for COI and cost-benefit determinations, and the comparisons to see if herbal therapies are better than the allopathic therapies in respect to low cost and benefit/effectiveness.

The study was started after an approval of the research project from Ethical Review Committee, Faculty of Pharmacy and Pharmaceutical Sciences, University of Karachi (project approval protocol, dated: September 18, 2012, ref. no. 0671/Pharm./10(28), for data collection of depressed patients. This data collection was confined to the physiological, medical or clinical information, and was constrained for collection of any human biological materials. The methodology of the study was developed according to the good research practices of pharmacoeconomics as provided by the International Society of Pharmacoeconomics and Outcome Research (ISPOR)[13]. The methods were validated[13] and replicated for the other two studies of the same series of research, i.e. for common cold and trauma in the 178 union councils of the city of Karachi.

Selection of medicines for diseases:

The herb, Calendula officinalis was utilized as a sample while the allopathic medicine povidone-iodine 10 % w/v (Pyodine® solution) was selected as a control in the study for trauma (minor cut). The tincture of C. officinalis was used as a medicine, 2-5 drops of tincture every 12-24 h depending on the area and severity of trauma.

The required sample size needed for this study was calculated by using the following Eqn.[14], n = z2p(1-p)/d2, where, n = sample size, z = standard normal distribution (i.e. 1.96), p = estimated mean of incidence proportion observed for the depression in the city of Karachi (i.e. 0.05), and d = standard error (0.05). Therefore, n = ((1.96)2×(0.05)×(1–0.05))/ (0.05)2=73. Instead of taking least sample size of 73 patients, a relatively large sample size was taken into consideration, i.e. taking one patient from each strata or union councils (n=178) patients each for allopathic and herbal therapies in common cold, depression and trauma. The patients and their data were segregated by their age groups in a population as defined by the Pakistan Bureau of Statistics[15]. There were 16 age groups (Table 1, from 0-75+ y with difference of 5 y in between) primarily used in cases of common cold and trauma. However, 11 age groups (Table 1, from 25-75+ y with difference of 5 y in between) were used for the cases of depression. Therefore, for each therapy, the sets of 178 patients were selected as stratified random samples from population of 20 819 302[15] in cases of common cold as well as trauma and from a population of 7 755 189[15] in cases of depression, combining total of 1068 patients. The process of data collection was completed in accordance with the proportions of, each group out of total age groups selected for cases of common cold, depression and trauma. Following formula was used for the sample size based on age groups, age group based sample size = (percentage of age group in population/100)×sample size.

Clarity of variables in the study:

The societal perspective was followed for the present study for both the allopathic and herbal therapies for common cold, depression and trauma. The data of the 1068 patients sampled for the allopathic and herbal therapies were collected for 1 y (from March 2015 to February 2016). A simple decision tree model was used as a guide within the specified time horizon. Standard deviation (SD) and standard error of mean (SEM) were used as the two main parameters of statistical uncertainty for the study.

To obtain the maximum data input from 1068 patients selected in the research study, a bilingual layered style interviews, questionnaires and opinion surveys[16,17] were devised, which consists of a blend of open and close-ended questions. The interviews were rarely used in situations where respondents were unable to feedback to the questionnaires due to diversified reasons. The questionnaires and opinion surveys were available to the respondents in the form of choices between paper-based as well as an online (survey with Limesurvey™ and surveymonkey.com). Surveys are the only convenient mode of data collection to gather information. They are found relatively cheap and respondent-friendly than the interviews as surveys can be completed and submitted with patient’s own ease and will.

Utilization of database for data collection and preliminary calculations:

Since there was no database available for the herbal and allopathic therapies chosen in relevance with the scope of the study, therefore, fresh data were collected from 1068 patients from 178 union councils in the city of Karachi. The information gathered from either interviews, questionnaires or opinion surveys were distributed into two categories. The first category of data deals with epidemiological data including incidences as well as old cases to calculate the prevalence of chosen conditions. The second category of data deals with the addresses of patients including their towns and union councils, their genders and age, for each visit the fees of physicians/herbal practitioners as well as the cost of medicines and transport, loss of income and the loss due to pain experienced. All the data was used to calculate COI and CBA by evaluating the direct and indirect costs as well as the benefit gained from the chosen therapies. As far as the data related to incidence and prevalence, all the major clinics and hospitals as well as herbal clinics in 178 union councils of city of Karachi were surveyed for number of new and old cases of common cold, depression and trauma.

The data were gathered gradually and calculated into meaningful and required pharmacoeconomic evaluations (COI and CBA) with Microsoft Excel 2016. The detailed statistical analysis was performed along with graph generation with the help of IBM® SPSS version 23. For the COI and the CBA the process in different stages were divided for better understanding of collected data and ease of calculations.

The COI analysis for individual patients of common cold, depression and trauma was conducted by calculating the direct COI by summing up fees of physician/herbal practitioner as well as the cost related to medicines and transport. The indirect COI was arrived at by adding up the loss of income and loss due to pain. The COI was arrived at by adding the calculated direct and indirect costs. To determine the prevalence of common cold, depression and trauma in 178 union councils of the city of Karachi, the new incidences and old cases found during survey were added up. The duration of the conditions was noted down while recording data from individual patients to calculate mean duration of each condition. To determine the COI on a city level as a product of mean COI, the prevalence, mean duration and frequency of condition.

While, the CBA was carried out in multiple steps including determination of direct and indirect benefits/ savings. For determining the direct benefits/savings, first step was to evaluate average effectiveness of therapies in terms of reducing severity of first and second symptoms selected to study common cold, depression and trauma. For common cold as well as the duration of condition, first and second symptoms were sneezing and cough. For depression, these were feeling bad about oneself and thoughts of hurting oneself, while for trauma, these were the pain and inflammation.

The annual frequency of a condition was simply calculated by how many times a condition occurred in a calendar year, while the frequency of chronic conditions like depression was treated as a single onset, i.e. 1.

Prevalence was calculated by summing up new cases for reported depression and the old cases existed in Karachi[18]. The data for the total population were calculated from the Pakistan Bureau of Statistics[15]. While incidences and data of old cases were gathered from clinics and hospitals existed in all 178 union councils of Karachi. Prevalence was calculated using the formula[19] Prevalence = (new incidences+old cases), where, new incidences are the number of new cases reported within time of study, and old cases refer to number of old cases reported within the time of study.

Duration per onset of condition:

The duration per onset of the condition is simply calculated using, duration = time of end of condition– time of start of condition. 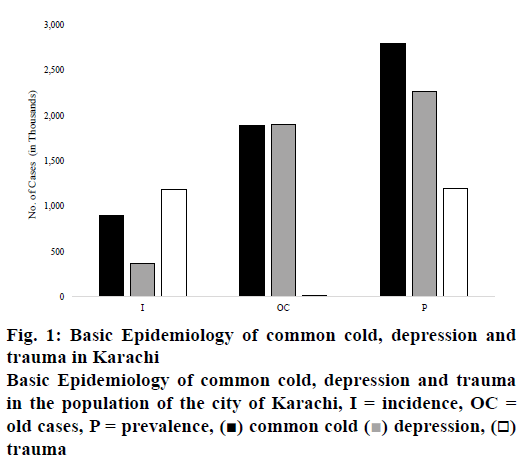 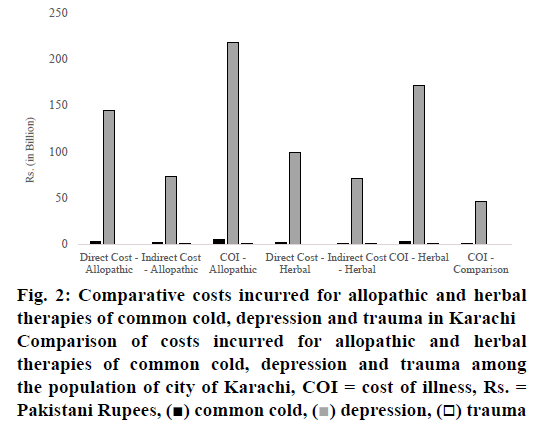 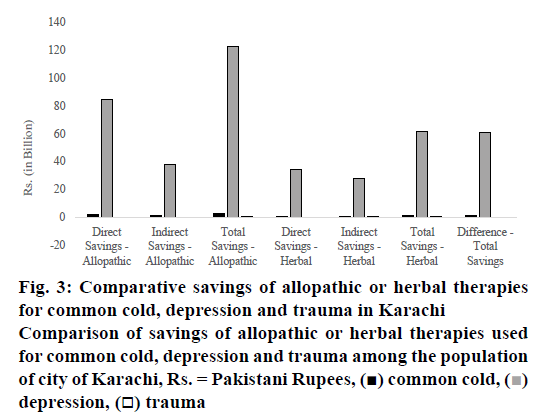 Although, after the detailed analysis of costs and benefits of allopathic and herbal therapies of common cold, depression and trauma, at first it seems like if allopathic therapy provided more benefits than herbal therapy (fig. 3), but it is because the methodology involved for cost benefits that used components from costs and thus calculating more benefits against higher cost. However, the herbal therapies that cost less in first place, have provided more average effectiveness and hence proved more beneficial in a developing country like Pakistan, where the budget of healthcare is already all time low[19]. From this research work, it could be concluded that the use of herbal therapies for treatment and management of common cold, depression and trauma is preferable than the allopathic therapies.