Since the introduction of gliclazide in the pharmaceutical industry, a large number of research groups have been engaged in various investigations aiming to enhance its biomedical application. But, very limited efforts have been made to study polymorphism of gliclazide. Therefore, this study focuses on solvent-induced polymorphism of gliclazide and its characterization by thermal methods. Three polymorphs namely, Form-I, II and III and an amorphous powder were produced from different solvents and solvent mixtures. Crystals were analyzed using infrared spectroscopy, differential scanning calorimetry, X-ray powder diffraction and single crystal x-ray diffraction. Polymorph Form-I is found to exist in centro-symmetric triclinic P-1 space group and has endothermic peak at 162.93°. Form-II has endothermic peak from 171.2° to 172.35° and exists in centro-symmetric monoclinic P2 1 /a space group while Form-III has endothermic peak from 168.93° to 169.86° and exists in centro-symmetric monoclinic P2 1 /n space group. The equilibrium solubility values of Form-I, II, III and the amorphous form were 0.4825±0.025, 0.2341±0.042, 0.2581±0.038 and 0.5213±0.072 mg/ml, respectively. The Form-I has relatively higher solubility and similar to that of amorphous gliclazide. Form-II and Form-III are relatively most stable and least soluble. However, there was no remarkable difference in their aqueous solubility under the conditions in which study was conducted.

Polymorphism has a greater impact on aqueous solubility[1,2] and bioavailability of a drug. Polymorphism attains a considerable influence on biopharmaceutical[3,4] and technological performance[5,6] of the drug. Polymorphism is extensive in sulfonylureas as these compounds represent chemical groups that cast hydrogen bonds and dipolar interactions, which are often convoluted in the formation of different polymorphic structures[7,8].

Gliclazide, 1-(3-azabicyclo[3.3.0]oct-3-yl)-3- tosylurea; is also noted as 1-(3-azabicyclo[3.3.0] oct-3-p-tolylsulfonylurea (fig. 1). Since its inception in the pharmaceutical industry, a large number of research groups have been intensified in various quests aiming to enhance its biomedical value[9-11]. But, very confined efforts have been made to reflect polymorphism of gliclazide. Winters et al., has conveyed solid state characterization of gliclazide polymorphs[12], but their study is confined to powder X-ray diffraction (XRPD), infrared (IR) spectroscopy and differential scanning calorimetry (DSC). Single crystal x-ray diffraction is used to study solid-state properties and crystal structure of gliclazide, but it was limited to characterization of only one polymorph[12]. There upon our studies resort on inspecting the solvent-induced polymorphism of gliclazide[13]. Solvent-induced crystallization technique is applied in this study; as a result the polarity of the recrystallisation solvent and its ability to form hydrogen bonds has a great impact on the polymorphism of gliclazide. The isolated crystal forms were delineated by their melting points, IR spectra, DSC, XRPD patterns, single crystal x-ray diffraction and equilibrium solubility.

Gliclazide BP was graciously provided as a gift sample by Zhejiang Jiuzhou Pharmaceuticals Co. Ltd. All solvents used in the study were double distilled from an all-glass still. 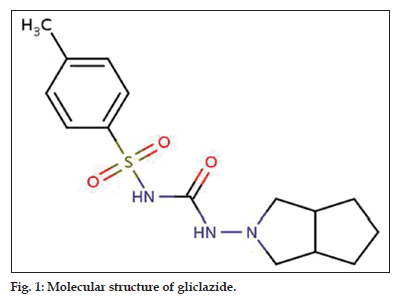 The thermal curves are recorded on a DSC on a Dupont DSC model in an open pan system under static conditions. The analyzer is equipped with a data acquiring station with attaining a capability to obtain the first derivative of DSC. Alumina was used as an inert reference. Each sample is sealed in an aluminum pan and the thermal readings were observed at a rate of 10°/min from room temperature to 225º.

The X-ray diffraction patterns are recorded for the samples with a radiation source of Cu-K alpha =1.54056 Å using a Bruker AXS advance X-ray diffractometer fitted with a scintillation counter and divergent beam monochromator. Data was collected from a range of 5°-50° at 2θ with a collection time of one second per step. Intensity ratio (I/I0, %) is calculated considering high intense peak as 100%.

The IR spectra are being recorded on Bruker Optics, Tensor 27. Samples were scanned over 400–4000 cm-1 with a resolution of 4 cm-1. Samples were neither grinded nor compressed to prevent stress-induced polymorphic changes in the samples.

Higuchi-Connors method (1965) was followed to determine the solubility of each polymorphic form[14]. An excess amount of each form (100 mg) was added to 25 ml of deionized water in a 100 ml flask with a glass stopper. The flasks were placed on a mechanical shaker and maintained at 37° in thermostatic water bath for 72 h. An aliquot (3 ml) of each solution was withdrawn and filtered through a dialysis membrane 0.45 μ Millipore filter. The amount dissolved was determined by reading the absorbance at 228 nm using a UV/Vis spectrophotometer (Mode l UV-240, Shimadzu, Japan) and using suitably constructed calibration curve.

DSC is an extremely important analytical tool for measuring the wide variety of transitions in pharmaceutical materials[15]. DSC data can derive useful information in identifying the polymorphs. The DSC scans of all the crystals and raw material are shown in figs. 2 and 3. The DSC endothermic details of gliclazide crystals are presented in Table 1. The DSC curve of the gliclazide crystal prepared from ethanol shows a sharp endothermic peak at 162.93° with an insignificant peak at 124.80°. This form is designated here as the polymorph-I. The DSC curve of the polymorph-II, which is obtained by crystallization from methanol, exhibits a single sharp endotherm at 171.20°. This polymorph can also be obtained from acetone, it shows melting endothermic peak at 172.35°.

Gliclazide sample crystallized in dichloromethane, ethyl acetate and chloroform is designated here as the polymorph-III. This form has melting endotherm between 168.93° to 169.86° depending upon the solvent system used. The DSC scans of the commercial sample (untreated gliclazide) shows (fig. 3) an endothermic peak at 171.56°. The peak is short and not sharp like other crystalline forms indicating its amorphous nature[16]. 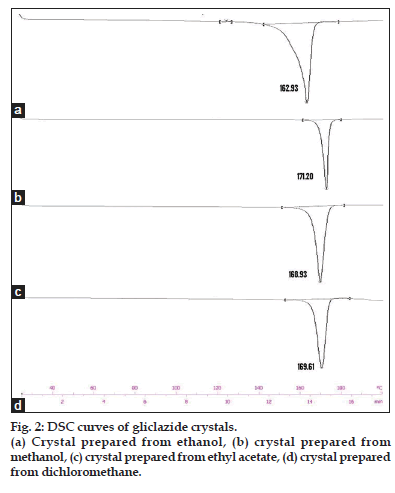 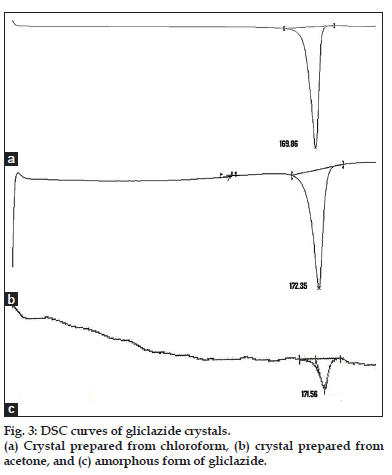 According to Kitaigorodsky for molecules with center of symmetry, the possible space groups are P, P21C, C2/c and Pbca for a 2-fold axis[22]. Also, in both the polymorphs the two pairs of vectors are perpendicular, while the third pair makes an angle other than 90° (α = γ=90°, β≠90°) and the crystal is described by vectors of unequal length (a≠b≠c). Based on these features centro-symmetric monoclinic space group P21/a, P21/n are suggested for polymorph-II and polymorph-III, respectively[23]. The settings P21/a, P21/n, are just different settings of the most common space group; P21/c (space group no.14) and these are indeed (with couple of exceptions) very common space groups. P21/a indicates a primitive monoclinic unit cell with a twofold screw axis along b, and a glide plane to this with a transition of a/2[24].

Polymorph-I is described by vectors of unequal length (a≠b≠c) and angle (a≠b≠g), as in the orthorhombic system. In addition, all three vectors are not mutually orthogonal (α=89.96°, β=118.55°, γ=91.39°)[25]. Therefore, centro-symmetric triclinic P-1 space group is proposed for this crystal. The commercial sample of gliclazide exhibit weak scattering to a single crystal X-ray diffraction, which clearly confirms its amorphous nature. 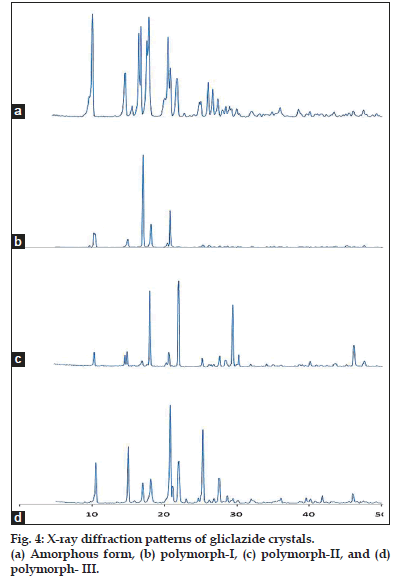 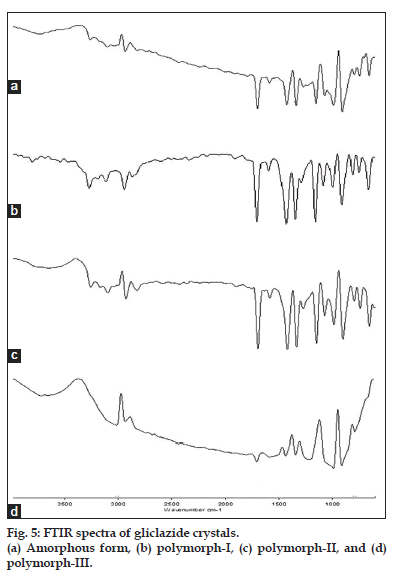 The equilibrium solubility values of the three crystalline polymorphs, I, II, III, and an amorphous form were 0.4825±0.025, 0.2341±0.042, 0.2581±0.038 and 0.5213±0.072 mg/ml, respectively. According to ideal solution theory, the solubility of a drug is related to two important thermodynamic parameters i.e. heat of fusion and melting point[26]. High melting and hard crystalline materials with large enthalpies of fusion are less soluble than low melting compounds[27]. Because, compounds with strong crystal lattices (high melting points) will readily crystallize in solvent hence the solubility benefit will be low[28]. Compounds with weak crystal lattices (low melting points) are less prone to crystallize and therefore amount in solution will remain high[29,30]. Microscopic visual analysis infers needle shape (fig. 6) for polymorph-II and III, which is the most crystalline state. These forms showed greater heat of fusion, which is clearly evident from DSC results. Therefore they are more stable and less soluble. polymorph-I, the most energetic exhibits a less crystalline (fig. 6) and lower heat of fusion and therefore has relatively higher solubility and is close to the amorphous gliclazide[31-33].

In conclusion, the three polymorphic forms of gliclazide were elucidated by solvent-changing method. All known polymorphs are least soluble but sufficiently stable. Polymorph-I was found to exist in centro-symmetric triclinic P-1 space group. This form has relatively higher solubility and similar to that of amorphous gliclazide. Polymorph-II and III exist as centro-symmetric monoclinic space group P21/a, P21/n and they are relatively more stable and less soluble. However there was no remarkable difference in their aqueous solubility under the conditions in which study was undertaken.

We are grateful to the Management, Acharya Institutes and the Principal, Acharya and B. M. Reddy College of Pharmacy, Bangalore, for providing research facilities. We are also thankful to Dr. L. V. G. Nargund Chairman, Nargund Research Foundation, Bangalore, for analysis of crystals and crystallographic studies.