The objective of the present work was to develop stomach specific delivery systems for amoxicillin and metronidazole using chitosan and poly(acrylic acid) hydrogels. Chitosan and poly(acrylic acid) hydrogels were prepared with different composition of copolymers. The hydrogels were evaluated for swelling studies, mucoadhesive studies, in vitro drug release, scanning electron microscopic and FTIR analysis. The effect of chitosan and poly (acrylic acid) on swelling and in vitro drug release was carried out. The n value calculated was <0.5 for all the formulations containing amoxicillin and metronidazole indicating Fickian diffusion mechanism. The hydrogels with chitosan and poly (acrylic acid) ratio of 0.25:1 showed greater mucoadhesive property, maximum swelling and complete release of drugs, hence can be used for stomach specific delivery of drugs.

Mucoadhesive controlled release dosage formulations have gained considerable attention due to their ability to adhere to the mucus layer and release the loaded drug in a sustained manner. By using these dosage forms, intimate contact time with the mucus surface would increase, which results in an increased drug retention at the site, which leads to improved therapeutic efficacy for the treatment of gastrointestinal tract infections. The widely studied mucoadhesive materials include chitosan, hydroxypropyl cellulose, poly(acrylic acid) (PAA) and their derivatives. Chitosan is a copolymer of ß-(1→4)- linked 2-acetamido-2-deoxy-D-glucopyranose and 2-amino- 2-deoxy-D-glucopyranose. The polycationic biopolymer is generally obtained by alkaline deacetylation from chitin, which is the main component of the exoskeleton of crustaceans, such as shrimps, crabs [1]. Chitosan is currently used in various medical applications such as topical ocular application, implantation or injection [2-4]. Chitosan is biodegradable and is known to act as penetration enhancer by opening tight junction [5,6]. Chitosan also posses bioadhesive property, promotes wound healing and has bacteriostatic effect [7,9]. Chitosan forms polyelectrolyte complex with oppositely charged components like carbopol, alginate and pectin. Hydrogels are three dimensional, hydrophilic, polymeric networks capable of imbibing large amount of water or biological fluids. Hydrogels are of special interest in controlled release applications because of their soft tissue biocompatibility, the ease with which drugs are dispersed in matrix and the high degree of control achieved by selecting the physical and chemical properties of polymer network [10]. In case of diseases involving peptic ulcers, it has been demonstrated that Helicobacter pylori is one of the major causative agents. This bacterium releases enzyme urease, which converts urea into ammonia and bicarbonate, which aids in neutralizing the acidic medium and allow the bacteria to colonize in gastric mucosa [11,12]. Amoxicillin and metronidazole, which are effective in treating H. pylori under in vitro conditions, score poorly when used to treat infections in vivo. The failure of these drugs has been proposed to be an outcome of sub effective bactericidal concentrations available at the site and their instability following oral administration [13]. In the present work, an attempt has been made to formulate hydrogels of amoxicillin and metronidazole using chitosan and PAA. Chitosan hydrogels provide pH-responsive release profile by swelling in acidic environment of gastric fluid to release drug over a period of time.

Amoxicillin trihydrate and metronidazole were gift samples from Karnataka Antibiotics and Pharmaceuticals Limited, India; Chitosan (MW≈3.5×105, >80% deacetylated) was purchased from Vishu Aquatech (Chennai, India). Carbopol 934 and PAA (poly(acrylic acid)) were purchased from Loba Chemie Pvt. Ltd., India. All other chemicals were of analytical grade and double distilled water was used throughout the experiment.

Chitosan solution was prepared in 1% v/v acetic acid under stirring. Chitosan and PAA were used in the ratio of 1:1, 0.5:1, 0.25:1, 1:0.5, and 1:0.25 to prepare five formulations F1-F5. Specified amounts of amoxicillin trihydrate and metronidazole were added to chitosan solution and stirred for 15 min. PAA dissolved in distilled water was added to chitosan solution gradually under stirring. The solution obtained was immediately poured into petridish and polyionic complexes were kept overnight at room temperature. The hydrogels obtained were dried for 24 h under vacuum. The dried hydrogels were crushed and passed through sieve # 60 and #85. Those hydrogel particles passed through sieve # 60 but retained on sieve # 85 were used for further studies.

IR absorption of the prepared hydrogels were measured using the KBr pellet method at a compression pressure of 2500 lb/m2 on a FT-IR spectrophotometer type FT-IR 1600 Perkin Elmer Co Japan. SEM studies were carried out on hydrogel samples after coating with gold-palladium on a scanning electron microscope, model Joel LV 5600 USA.

The swelling property of hydrogels were studied by placing a known weight in 20 ml of 0.1 N HCl, and at every 1 h interval, the hydrogels were removed, excess surface liquid was removed by blotting and their weights were recorded. The swelling process was characterized by (Eqn. 1) % swelling=(Ws -Wd)×100/Wd, where Ws is the weight of the swollen hydrogel and Wd is the weight of dry hydrogel.

The drug release studies were carried out in 0.1 N HCl for 10 h. Electrolab TDL 08L automated dissolution tester USP XXI eight jar rotation paddle apparatus type-II was used. Hydrogels were transferred to the dissolution media (900 ml 0.1 N HCl) at 37±0.5° and stirred at 50 rpm. The drug concentration in the solution was determined at intervals by measuring the absorbance using a Shimadzu 1601 UV/Vis spectrophotometer. The release of amoxicillin and metronidazole from the hydrogels were analyzed using an exponential relation Mt/M∞=ktn (Eqn. 2), which relates the amount of drug released from hydrogels as a function of time [14].

The mucoadhesive property of the hydrogels were evaluated by an in vitro adhesion testing method known as wash-off method [15]. Pieces of intestinal mucosa (2×2 cm) were mounted on to glass slides (3×1 inch) with cyanoacrylate glue. Two glass slides were connected with a suitable support. About 50 hydrogel particles were spread on to each wet rinsed tissue specimen and immediately thereafter the support was hung on to the arm of a USP tablet disintegrating test machine. By operating the disintegrating test apparatus the tissue specimen was given a slow regular up and down movement in the test fluid at 37±0.5°. At every 1 h interval the equipment was stopped and the number of particles still adhering to the tissue was counted.

The FTIR spectra of chitosan (fig.1) depict characteristic absorption bands at 3436, 2916 and 2850 cm-1, which represent the presence of OH group, CH2 and CH3 groups (aliphatic groups). The bands at 1553 (asymmetrical COO- stretching) and 1405 cm-1 (symmetrical COO- stretching) present in the spectrum of the hydrogel, together with the small band at 1637 cm-1 (attributed to the formation of NH3+) are indicative of complexation between the amino groups of chitosan and the carboxylic groups of PAA [17]. From the IR spectra it is clear that there is no significant shift in the major peaks, which indicates that there is no interaction between the polymers and the drugs used. 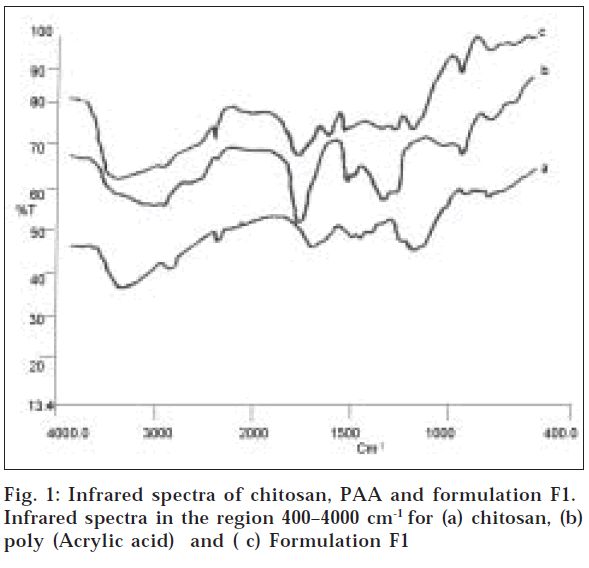 The surface morphology of hydrogel microparticles with magnification at 160X is shown in fig. 2. The surface is sponge like microporous shape with fibrilar structure at 850X (fig. 3). This structure could be due to electrostatic interaction between cationic groups of chitosan and anionic groups of PAA Since the release of amoxicillin and metronidazole is affected by swelling, the effect of chitosan and PAA concentration on the swelling of hydrogels was studied. Increasing chitosan content increased the percentage of swelling, this could be attributed to the presence of greater amount of polymer within the network structure with a major amount of pendant groups and these groups ionize in a low pH. This results in increased in the ionization causing increased electrostatic repulsions. The swelling of hydrogels was greatly increased by the presence of both chitosan and PAA. The existence of a high molecular weight polymer in the formulation could help in facilitating the initial hydration of the hydrogels by creating an osmotic gradient and the presence of PAA within these hydrogels could help the protonation of amine groups from chitosan causing an electrostatic repulsion among polymeric chains. fig. 4 shows the effect of varying concentration of chitosan and PAA on swelling of hydrogels. All the formulations showed rapid swelling, which is due to the porous nature of the hydrogels offering large surface area allowing rapid uptake of the solvent. The percentage swelling was found to decrease with the decreasing concentration of chitosan. Formulation F5 with chitosan and PAA ratio of 1:0.25 showed rapid swelling compared to formulation F3 (0.25:1). In case of hydrogels it was observed that hydrogels containing higher amount of chitosan showed faster drug release. All formulations present an initial burst effect, which may be attributed to diffusion of the drug, caused by rapid gel swelling and also the release of drug adsorbed on the surface of the gel matrix. The release of drugs from the hydrogels was analyzed using an exponential relation, which relates the amount of drug released from hydrogels as a function of time (Eqn. 2). Mt/M∞=ktn where Mt is the amount of drug released at time t, M∞ is the drug present in the hydrogels at time zero, k is the characteristic constant of the hydrogel, and n is the characteristic exponent describing the drug release mechanism. For planar geometry, the value of n=0.5 indicates a Fickian diffusion mechanism, for 0.5<n<1.0 indicates non-Fickian or anomalous transport, and n=1 implies case II (relaxation controlled) transport. The constant n and k were calculated from the slope and intercepts of the plots of log (Mt/M¥) versus log t. The values of n and k are reported in Table 1. The n value calculated was <0.5 for all the formulations containing amoxicillin and metronidazole indicating Fickian diffusion mechanism, where the rate of drug diffusion is slower than the polymer chain relaxation. The release of amoxicillin and metronidazole is shown in fig. 5 and fig. 6. Formulation F1 with chitosan and PAA ratio of 1:1 showed 89% of amoxicillin and 90% of metronidazole release, F2 showed 76% and 81%, F3 showed 70% and 65% release, F4 showed 94% and 97% while F5 showed complete release of drugs in 10 h. This showed that there exists correlation between the swelling and the drug release. Formulation with higher chitosan content (F5) swelled rapidly thereby causing higher release of drugs compared with formulation containing lower content of chitosan(F3)

N-characterstic exponent describing the drug release mechanism, Kcharacterstic constant, R2-regression coefficient. The constant n and k were calculated from the slope and intercepts of the plots of log(mt/m∞) versus log t, mt is the amount of drug released at time t and m∞ is the drug present in the hydrogels at time zero

Table 1: Parameters n,k And r2 For Drug Transport Through The Hydrogels (From Eqn. 2). 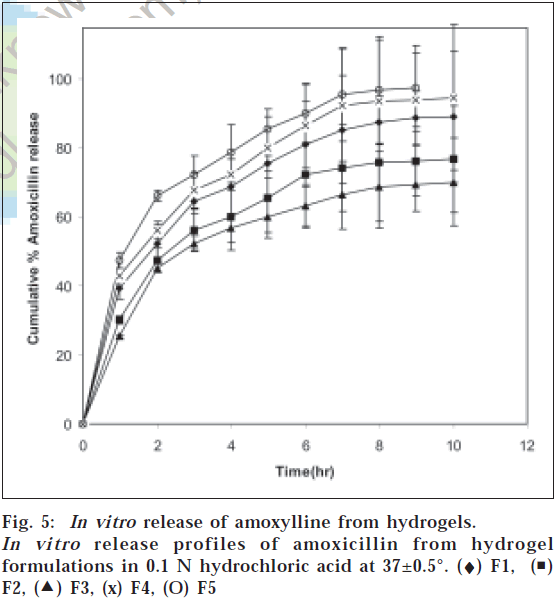 The mucoadhesive studies indicated that all the formulations showed good mucoadhesive property, which is desirable for site-specific delivery to stomach. Formulations containing chitosan and PAA in the ratio of 1:1 showed higher adhering of hydrogel particles at the end of 8 h cycle compared to other formulations.

The authors wish to thank Principal J. S. S. College of Pharmacy, Mysore and J. S. S. Mahavidyapeetha, Mysore for encouragement and providing facilities to carry out the research work.