Preparation and Evaluation of Mucoadhesive Nanoparticles of Rosuvastatin

Mucoadhesive nanoparticles constitute one of the important novel drug delivery systems, which cause localization of the drug at the site of absorption. The aim of this study was to prepare mucoadhesive nanoparticles of rosuvastatin calcium, an antilipidemic agent. Rosuvastatin calcium nanoparticles were prepared employing the precipitation technique and were characterized using Fourier-transform infrared spectroscopy, differential scanning calorimetry, X-ray powder diffraction, scanning electron microscopy and by estimating their zeta potential and in vitro drug release. Results indicated that gastroretentive nanoparticle formulation could be developed to release rosuvastatin for up to 8 hours in the stomach.

Oral administration is the most convenient and preferred means of any drug delivery to the systemic circulation [1,2]. Drugs that are easily absorbed from gastrointestinal tract (GIT) have short half-lives and are eliminated quickly from systemic circulation. Frequent dosing of these drugs is required to achieve suitable therapeutic activity. To overcome this limitation, oral sustained controlled release formulations are an attempt to release the drug slowly into the GIT and maintain an effective drug concentration in the systemic circulation for a long time. Gastro retentive drug delivery is an approach to prolong gastric residence time, there by targeting site-specific drug release in the upper GIT for local or systemic effects [2-4]. Mucoadhesive systems that cause bioadhesion to stomach mucosa, unfoldable, extendible or swellable system, which limit emptying of the dosage forms through the pyloric sphincter of the stomach. Nanoparticulate dosage forms that can be retained in stomach by adhering to the mucosal layer of the stomach are called stomach-specific mucoadhesive nanoparticles (SSMN). SSMN can offer controlled delivery of drugs, by continuously releasing the drug for prolonged periods just prior to the site of absorption, thus ensuring optimal bioavailability [5]. The aim of this study was to prepare mucoadhesive nanoparticles of rosuvastatin calcium, an antilipidemic agent, which is incompletely absorbed from the gastrointestinal tract with a 19 h plasma half-life and approximately 20 % bioavailability. The prepared mucoadhesive nanoparticles were evaluated for applicability to pharmaceuticals.

Rosuvastatin calcium-loaded nanoparticles were prepared using a nanoprecipitation technique using different polymer concentrations. To avoid oxidation of rosuvastatin, it was stored at a cool place. A 33 factorial design to prepare formulations was applied, which is given in Table 1. Three factors were evaluated, each at 3 levels and experimental trials were performed in all 27 possible combinations. The selection of independent variables were, concentration of Eudragit RL 100 (X1), rpm (X2) and concentration of the surfactant (X3) with fixed amount of rosuvastatin. Batches were designed for three ratios of rosuvastatin:Eudragit RL i.e. 1:0.5, 1:1, 1:1.5 and concentration of surfactant i.e. 1, 2 and 3 % were selected and rpm 500, 600 and 700 were selected. Eudragit RL 100 and rosuvastatin calcium was dissolved in acetone. The preformed drug-polymer solution was added drop-wise to liquid paraffin containing Span 80 and stirred at 600 rpm for 2 h. The formed particles were filtered through a Whatman filter paper of pore size 25 μm, and washed twice with petroleum ether [6].

Weighed samples of drug-loaded nanoparticles (10 mg) were dissolved in 10 ml of methanol under sonication for 15 min. The samples were filtered using membrane filter and absorbance of sample was determined at 245 nm using UV/Vis spectrophotometer (Shimadzu 1800). The percent drug entrapment efficiency (EE) was calculated by the Eqn. given below [7]. % EE = mass of drug in nanoparticles/mass of drug used in preparation×100.

Mean average particle size of rosuvastatin nanoparticles was determined by Malvern instrument ver. 6.12. The analysis was performed by introducing 0.3 ml of sample into the viewing unit. The dynamic light scattering is used to measure the particle size and molecule size. The particle size analysis was performed at a scattering angle of 90° at room temperature. The diameter was averaged from three parallel measurements and expressed as mean ± standard deviation. The zeta potential was determined by using the Malvern Zetasizer ver. 6.12 (Malvern Instruments, UK), the electrophoretic mobility was converted to the zeta potential. To determine the zeta potential, nanoparticle samples were diluted with KCL (0.1 mM) and placed in electrophoretic cell where an electrical field of 15.2 V/cm was applied. Nanoparticles were coated with a thin gold-palladium layer by sputter coater unit (VG Microtech, UK) and the surface topography was analysed with a Cambridge Stereoscan S 120 Scanning electron microscopy (SEM; Cambridge, UK) operated at an acceleration voltage of 10 kV.

Fourier-transform infrared spectroscopy (FTIR) of rosuvastatin and optimized batch of nanoparticles R22 was determined using Agilent Cary 630 instrument. Sample was kept onto sample holding surface for analysis. The spectrum was scanned over the wave number range of 4000-400 cm-1. X-ray powder diffraction (XRD) of pure drug and optimized batch R22 of nanoparticles were analysed by Philips PW 1729 X-ray diffractometer. Samples were irradiated with monochromatized Cu Kα- radiations (1.542 A°) and analysed between 2-60° (2θ). The voltage and current used were 30 kV and 30 mA, respectively. The range was 5×103 cycles/s and the chart speed was kept at 100 mm/2θ.

Thermal properties of rosuvastatin and optimized batch of nanoparticles were analysed by differential scanning calorimeter (DSC; TA Instruments, USA Model: SDT 2960). Indium standard was used to calibrate the DSC temperature and enthalpy scale. Nitrogen was used as the purge gas through DSC cell at flow rate of 50 and 100 ml/min through the cooling unit. The sample (5- 10 mg) was heated in a hermetically sealed aluminium pan. Heat runs for each sample were set from 25 to 500° at a heating rate of 10°/min.

The method tests the mucoadhesive property of polymer to mucosa. Goat intestinal mucosa was mounted on a glass slide and accurately weighed dispersion of mucoadhesive nanoparticles was placed on the mucosa of the intestine. The glass slide was incubated for 15 min in a desiccator at 90 % relative humidity to allow the polymer to interact with the membrane and finally placed in the cell that was attached to the outer assembly at an angle 45°, 0.1 N HCl previously warmed to 37 ± 0.5 was allowed to flow through the cell over the nanoparticles and membrane at the rate of 1 ml/min. The nanoparticles were washed, collected at different time intervals, separated followed by drying at 50°. The weight of the nanoparticles washed out was taken and percent mucoadhesion was calculated using the Eqn., percent mucoadhesion = Wa/W1×100, where, Wa= weight of nanoparticles applied, W1= weight of nanoparticles leached out.

Nanoparticle samples were placed in dialysis bags, which were sealed and placed in the dissolution medium and the normal sink condition was maintained. Drug release study was carried out using the USP dissolution apparatus under conditions of 37 ± 0.5° and stirred at 100 rpm. Drug release from the nanoparticle formulations was monitored for 8 h using 0.1 N HCl as the dissolution medium. At each time interval, 5 ml of sample was collected and replaced with fresh medium. The collected sample was filtered through a Whatman filter paper No 41. After appropriate dilution, the sample was analysed spectrophotometrically at 240 nm. 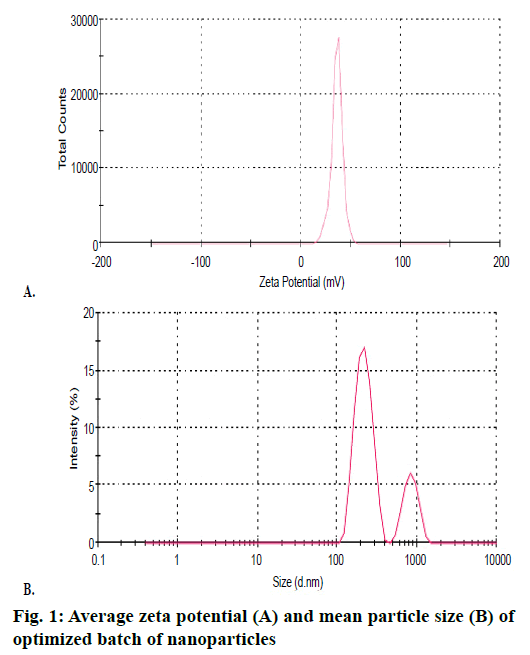 Figure 1: Average zeta potential (A) and mean particle size (B) of optimized batch of nanoparticles

Figure 2: SEM analysis of rosuvastatin calcium (A) and optimized batch of nanoparticles (B) Figure 3: FTIR spectra of rosuvastatin calcium (A) and optimized batch (B) 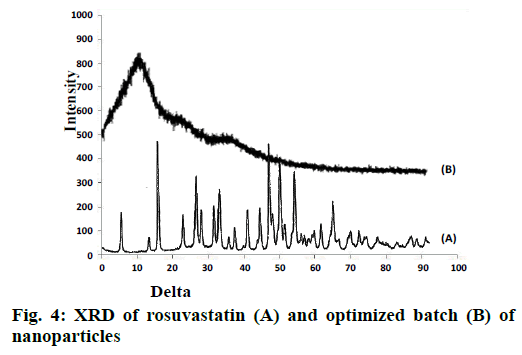 Figure 4: XRD of rosuvastatin (A) and optimized batch (B) of nanoparticles 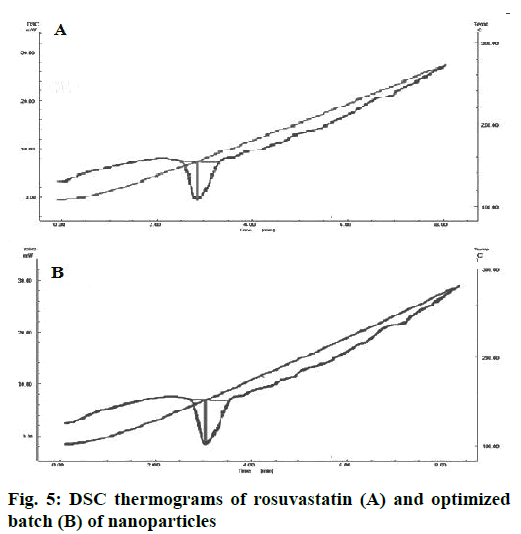 Figure 5: DSC thermograms of rosuvastatin (A) and optimized batch (B) of nanoparticles

The release profile obtained from the formulation in the range of 92.26 ± 1.94 to 98.34 ± 1.14 % at 8 h. Percent drug release of all formulations is shown in Figure 6. A full 33 factorial design was used to study the effect of drug and polymer ratio, and concentration of surfactant on the nanoparticles size, EE. As drug and polymer ratio increased, EE and particle size were found to be increases. The formulation was optimized on the basis of size, stirring speed, stirring time, PY, EE, as well as in vitro drug release. Formulation R22 is optimized formulation for nanoparticles preparation contains 1:1.5 drug-polymer ratio (rosuvastatin calcium:Eudragit RL 100), 1 % surfactant (span 80), and at 600 rpm. The regression analysis of different evaluation parameters was as given in Table 3. 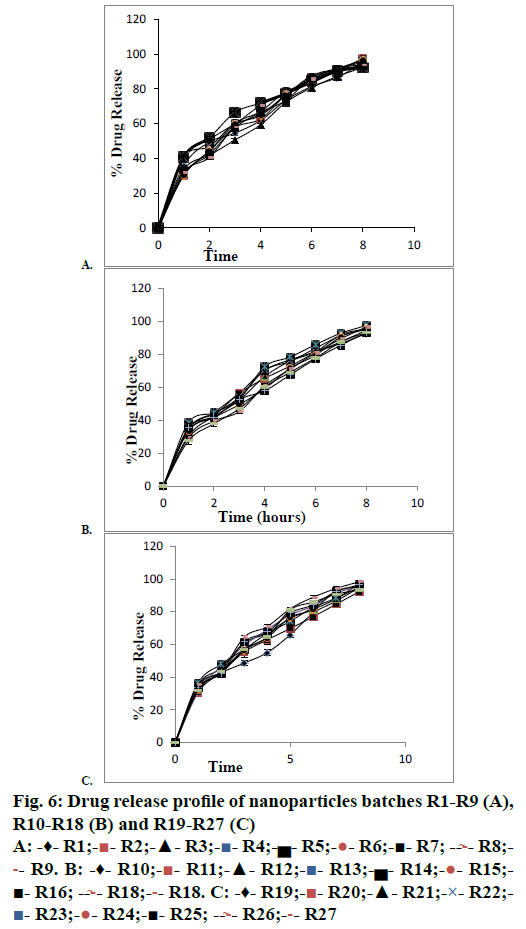 SEM analysis revealed that the nanoparticles were small and spherical in nature. Particle size observed between 400 ± 0.59 to 500 ± 0.47 nm for all formulations. In vitro drug release was studied up to 8 h. Percent drug release for the formulation varied from 92.26 ± 1.94 to 98.34 ± 1.14 %. The percent drug release for optimized batch was 95.46 % in 8 h, which followed Higuchi model indicating that the drug release form homogenous matrix was through the diffusion. Thus the present research was an approach to enhance the solubility and bioavailability of poorly water soluble drug along with gastroretention.

Author is thankful to Vergo Pharmaceutical Ltd, Goa, India, for providing the rosuvastatin calcium as a gift sample, also thankful to Shivaji University Kolhapur for DSC, XRD and SEM testing of formulation.