Amlodipine besylate (AB), a calcium channel blocker, is a drug of choice in the treatment of hypertension and angina pectoris[1]. AB undergoes first pass metabolism by oral route and thus exhibits only 60-65% oral bioavailability. The present investigation was aimed at avoidance of first pass metabolism of AB by preparing chitosan microspheres for nasal administration. Mucoadhesive microparticle nasal delivery is an attractive concept, in that the drug can be entrapped inside particles to be released at the nasal mucosal surface, where the particles are adhered due to their bio/ mucoadhesiveness. Extensive works on microspheres using mucoadhesive polymers for drugs like pentazocine[2], insulin[3,4], FITC–dextran[5], gentamicin[6,7] are reported.

Chitosan is a polymer of choice, because it enhances the nasal absorption of low molecular weight molecules as well as peptides and proteins[8]. It is a mucoadhesive polymer having advantages as nontoxicity, biocompatibility and biodegradability[9]. The purpose of this study is to investigate the suitability of chitosan microspheres as nasal delivery system and also to study the influence of the process variables in the preparation of the microspheres.

Chitosan (200 mg) was dissolved in 2% v/v acetic acid solution. The drug (100 mg) was added in it and the suspension was extruded through syringe in 100 ml of liquid paraffin (heavy and light 1:1 mixture) containing 0.2% w/v DOSS, with stirring on Remi three-blade stirrer at high speed. After 20 min of stirring, 1 ml of glutaraldehyde (25% solution, as crosslinking agent) was added and stirring was continued for 3 h. Microspheres obtained were filtered and washed several times with cyclohexane to remove oil, and finally washed with water to remove excess of glutaraldehyde. Washings were analyzed for drug contents. Microspheres were then air dried at room temperature.

Particle size of the microspheres was determined by optical microscopy[11]. Average of 100 microspheres were used for the study and the mean particle size (arithmetic mean diameter) was considered to be the deciding factor in selecting optimum formulation conditions for each variable parameter studied.

Weighed quantity of microspheres were crushed and suspended in methanol to extract the drug from microspheres. After 24 h, the filtrate was assayed spectrophotometrically at 361 nm for drug content against methanol as blank. Corresponding drug concentrations in the samples were calculated from the calibration plot generated by regression of the data taken in triplicate.

The in vitro mucoadhesion of microspheres was carried out by modifying the method described by Ranga Rao and Buri13 using sheep nasal mucosa. The dispersion (0.2 ml) of microspheres in water was placed on sheep nasal mucosa after fixing to the polyethylene support. The mucosa was then placed in the dessicator to maintain at >80% relative humidity and room temperature for 30 min to allow the polymer to hydrate and interact with the glycoprotein and also to prevent drying of the mucus. The mucosa was then observed under microscope, and the number of particles attached to the particular area was counted. After 30 min, the polyethylene support was introduced into a plastic tube cut in circular manner and held in an inclined position at an angle of 450. Mucosa was washed for 5 min with phosphate buffer saline pH 7.4 at the rate of 22 ml/min using a peristaltic pump; tube carrying solution was placed 2-3 mm above the tissue so that the liquid flowed evenly over the mucosa. Tissue was again observed under microscope to see the number of microspheres remaining in the same field area.

Microspheres equivalent to 5 mg of AB were weighed and suspended in 20 ml of phosphate buffer saline pH 7.4 and stirred at 60 rpm at 370. At specific time intervals, samples (1 ml) were withdrawn and filtered. Same volume (1 ml) of the phosphate buffer saline pH 7.4 was replaced after each sampling. The drug content in the sample was determined in the filtrate by the method described above.

The microspheres of AB were prepared by the emulsification crosslinking method using glutaraladehyde as crosslinking agent. The microspheres obtained under these conditions were found to be spherical and without aggregation, and median size ranged from 10 to 60 µm and are therefore suitable for nasal administration.

The effect of the various process variables like stirring rate, concentration of DOSS (stabilising agent) and chitosan:drug ratio on particle size of microspheres is presented in Table 1. Mean geometric particle size, percent drug entrapment and % in vitro mucoadhesion of different batches of microspheres prepared are tabulated in Table 2. Optimizations of various formulation parameters in preparation of AB microspheres were carried out. The heavy and light liquid paraffin (1:1) as external phase, DOSS (0.2% w/v) as stabilizing agent, and the stirring rate of 1200 rpm were found to be optimum to yield AB microspheres. Glutaraldehyde 25% aqueous solution was selected as crosslinking agent due to its high rate of crosslinking and easy removal of the unreacted free glutaraldehyde.

Asterisk denotes average of 100 particles. Results are expressed as mean±sd.

Results obtained after evaluating different batches of chitosan microspheres for particle size, % drug entrapment and in vitro mucoadhesion values are averages of triplicates. The in vitro drug release profiles for all batches are shown in Table 3. The release of active agent from the matrix involves initial swelling followed by diffusion of the drug. The fractional release (Mt/M∞) up to 60% of AB at time t is fitted to Peppas equation. In the present systems, the value for n was found to be in the range of 0.74 to 0.85 with a correlation coefficient close to 0.99, indicating that the release mechanism followed anomalous (non- Fickian) transport as well as case II transport. The optimized batch MS2 was having n = 0.74, indicating that the release mechanism followed is anomalous (non- Fickian) (Fig. 2). The relaxation rate and diffusion rates are comparable17. 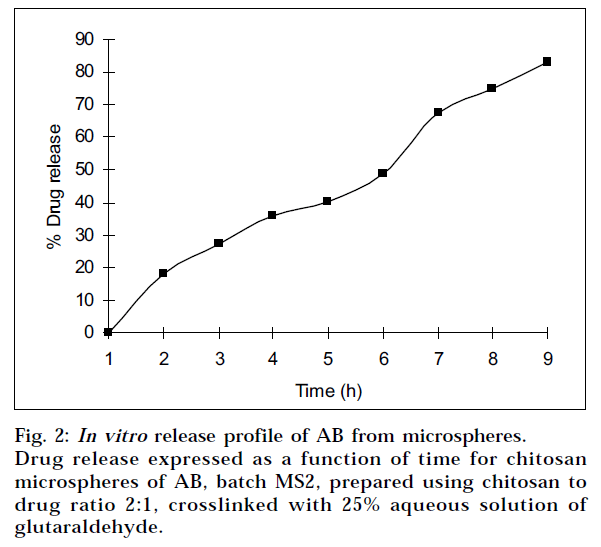 Fig. 2: In vitro release profile of AB from microspheres. Drug release expressed as a function of time for chitosan microspheres of AB, batch MS2, prepared using chitosan to drug ratio 2:1, crosslinked with 25% aqueous solution of glutaraldehyde.

In conclusion, these results indicate that the chitosan microspheres have potential to deliver AB following intranasal administration. Its possibility to avoid first pass metabolism of AB may ultimately show improvement of bioavailability than oral dosage, probably as a consequence of prolonged residence at the absorption site18.