The aim of this study was to prepare, using taste masked granules, rapidly disintegrating tablets of chlorpheniramine maleate, a bitter drug. The taste masked granules were prepared using aminoalkyl methacrylate copolymers (Eudragit E-100) by the extrusion method. In vitro release profile obtained at pH 6.8 indicate that perceivable amount of drug will not be released in saliva while high percent release (more than 80% in 30 min) would be obtained at acidic pH 1.2 of the stomach. These taste masked granules were directly compressed into tablets using sodium starch glycolate as a super-disintegrant. The prepared tablets containing the taste masked granules having sufficient strength of 3.5 kg/cm were evaluated for taste by both spectrophotometric method and through panel testing. Panel testing data collected from 20 healthy volunteers indicate successful formulation of oral fast disintegrating tablets which had good taste and disintegrated in the oral cavity within 30s.

In the present scenario, there is an ever-increasing demand for more patient compliant dosage forms. One important innovation in this direction is the development of fast dissolving/disintegrating oral dosage forms that dissolve or disintegrate instantly upon contact with recipient’s tongue or buccal mucosa [1-3]. They have proved to be ideal for geriatric and paediatric population, people suffering from dysphagia, clinical conditions where water intake is limited, situations where water is not available and for drugs undergoing high first pass metabolism [4]. Chlorpheniramine maleate is widely used antihistaminic drug but it is very bitter and as yet no mouth dissolving/disintegrating taste-masked preparation that might be useful in pediatric and geriatric patients is available in the market. Therefore, to provide this drug available in the market. Therefore, to provide this drug present study an attempt has been made to mask its bitter taste and formulate it into mouth disintegrating tablet.

The bitter drug chlorpheniramine maleate (CPM) was thoroughly mixed with different amounts of powdered Eudragit E-100. Then 10% ethanol was added to this mixture in a glass beaker and a gel was prepared. The prepared gel was manually pressed out using a syringe. After extrusion of the gel, ethanol was removed by evaporation overnight at room temperature. Subsequently the solidified gel was crushed into granules using a pestle and mortar. The drug: polymer ratio which produced taste masked granules was used for further studies [5-6].

The prepared Eudragit E-100 granules of CPM were compressed into rapidly disintegrating tablets (RDTs). The RDTs were made by using microcrystalline cellulose (MCC) as directly compressible binder and sodium starch glycolate (SSG) as the super-disintegrant [7-8]. Sucrose was used as a sweetening agent and flavoring done with menthol gave the tablets a more palatable feel. Magnesium stearate was added as the lubricant while mannitol was added as the diluent. Similarly control tablets were prepared using pure drug instead of taste masked granules. Different ratios of the super-disintegrant, SSG and the binder, MCC were tried for the formulation of CPM rapidly disintegrating tablets and the ratio that gave the minimum disintegrating time along with acceptable hardness was chosen for the formulation of the final batch of tablets (Table 1).

Table 1: Effect of SSG and mcc ratio on the disintegration time of chlorpheniramine maleate RDTS

The fracture strength, which is defined as the force, required to break a tablet by radial compression, was measured with a tablet hardness tester [9]. Friability of tablets was determined using Roche Friability tester [10].

To measure tablet wetting time, a piece of tissue paper folded twice was placed in a small culture dish (i.d.=6.5 cm) containing 6 ml of water, a pre-weighed tablet was put on the paper, and the time for complete wetting was measured. The wetted tablet was then weighed and water absorption ratio, R, was determined according to the following equation, R=100 (Wa-Wb)/Wb, where Wa and Wb the weight after and before water absorption,respectively [11].In vitro dissolution studies were carried out using USP XXIII Dissolution apparatus I (basket type) [6],A tablet was placed in a basket and rotated at 50 rpm. The release profile was studied both in phosphate buffer at pH 6.8 and hydrochloric acid buffer pH 1.2.

Disintegration time in the oral cavity was also determined. Six healthy volunteers, from whom informed consent was first obtained, randomly took one tablet and the time required for complete disintegration of the tablet in the mouth, without biting and without drinking water, was determined [11].

The taste evaluation was done using spectrophotometric method [12] and by panel testing [13]. For panel testing, 20 healthy human volunteers, of either sex, in the age group of 20-30 years were selected out of 31 volunteers based on the 6-n-propylthiouracil (Prop) taste sensitivity test [14].Taste threshold for all the volunteers were determined by making a range of dilutions of propylthiouracil. The non- tasters and super-tasters were rejected. Then the selected panel of 20 healthy human volunteers was requested to taste the taste-masked RDTs by keeping in the mouth till they disintegrated and rank it on a scale of perception ranging from 0-5. For comparison, RDTs of pure CPM were also subjected to taste evaluation by the panel and the results were compared [13].

The minimum concentration among a range of dilutions of a substance at which the volunteer just starts feeling the bitter taste is known as threshold concentration. The threshold bitterness concentration of CPM as determined by a panel of 20 healthy human volunteers was found to be 500 μg/ml (Table 2).

The results obtained by spectrophotometric method of analysis for taste of taste-masked CPM granules showed that 42.77±2.88 μg/ml of drug (approximately 1/12th the threshold bitterness concentration) was released in phosphate buffer pH 6.8 after 30 s of contact time. Also, sensory evaluation for taste by panel of 20 healthy volunteers confirmed the tasteless characteristics of the granules as none of the subjects felt any bitter taste even after keeping in mouth for 20-30 s. Hence, this technique of taste-masking using a pH-sensitive polymer was found to be effective in masking the bitter taste of the drug.

The prepared Eudragit E-100 granules of CPM were found to be tasteless, so they were compressed into rapidly disintegrating tablets. Different ratios of the super-disintegrant, SSG and the directly compressible binder, MCC were also tried for the formulation of RDTs and the ratio that gave the minimum disintegrating time along with acceptable hardness was chosen for the formulation of the final batch of tablets. From Table 1, it can be observed that although the ratios of SSG:MCC below ratio 1:3 gave very less disintegration times (less than 19 s) but tablet hardness was also very less, resulting in very friable tablets. All the ratios above 1:6 (i.e., formulations CT-7 to CT-12) gave very high disintegration times and therefore, were rejected. The formulation CT-5 was selected for the preparation of final batch of RDTs asacceptable hardness and rapid disintegration was observed. Various physical parameters of this batch of tablets are summarized in Table 3. Also a linear correlation between the disintegration time and wetting time of the RDTs was observed suggesting that wetting is an important step for the disintegration process (fig. 1). 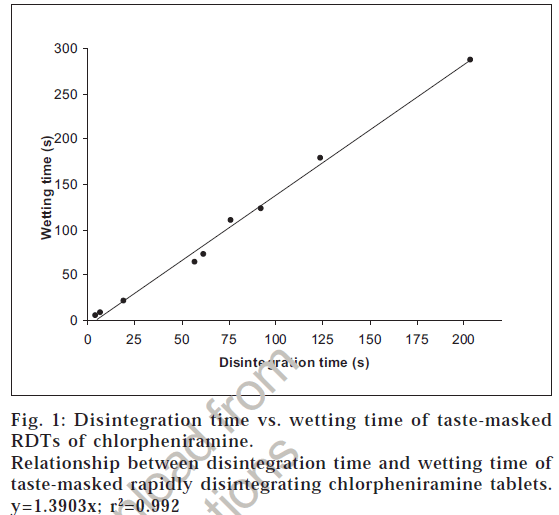 Figs. 2 and 3, show the dissolution profiles of taste-masked RDTs as well as of control (pure drug) RDTs of CPM. In phosphate buffer pH 6.8, a cumulative percent drug release of about 1% (0.089 μg/ml) was obtained in 10 min from RDTs of taste-masked CPM. This value is much less than the threshold bitterness concentration of CPM (500 μg/ml). This suggests that sufficient taste-masking has been achieved and that the bitter taste of the drug will not be perceived while the tablet is in the mouth after oral intake. 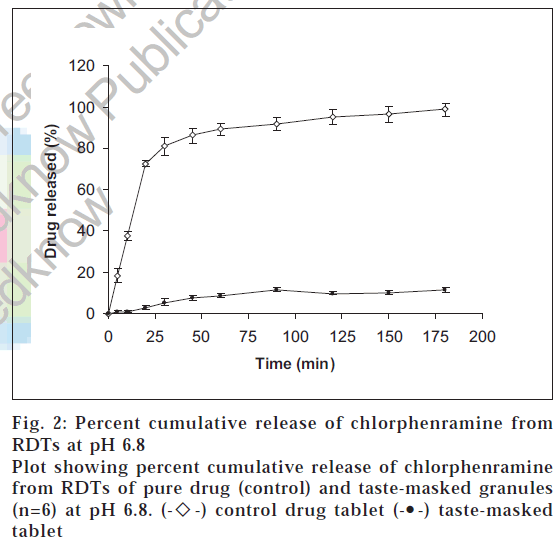 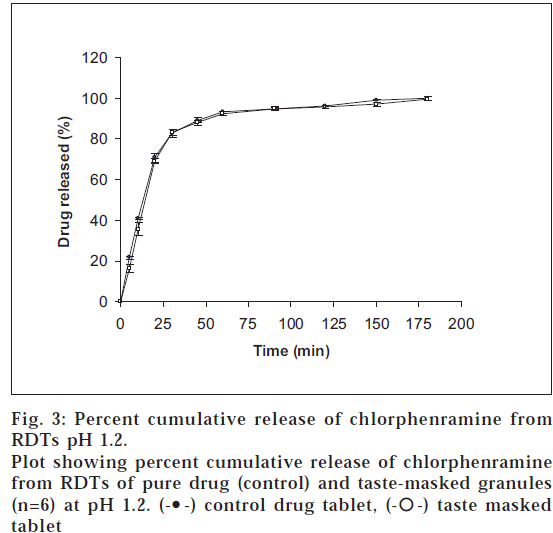 The results for the taste evaluation of the RDTs by a panel of 20 healthy human volunteers are shown in Table 4. All the 20 volunteers reported the taste-masked granules as tasteless on the perception scale and rated the formulated RDTs as good. This suggests that the bitter taste of CPM in the granules continued to be masked on being compressed into tablets. On comparison of the taste-masked tablet with tablet of plain drug, significant differences were found in the taste as calculated by Mann-Whitney test using NPSTAT [17] with calculated T1 =610 i.e.>105 (tabulated value) at p=0.01. While the RDTs of plain drug were rated as bitter to awful by the panel, the RDTs of taste-masked granules were rated as good by 100% of the panel. Moreover, all the volunteers experienced a good mouth feel of the chlorpheniramine maleate RDTs with a minimum of grit. This shows that these RDTs of CPM have good palatability.

Table 4: Evaluation of taste by the panel