A set of seventy four molecules belonging to the class of thioglitazones were subjected to the QSAR analysis for their antihyperglycemic activity. All the molecules were subjected to energy minimization to get 3D structures, followed by conformational analysis to get the conformation of the molecule associated with the least energy and highest stability. Various physico-chemical parameters were then calculated using ALCHEMY 2000 software, namely, thermodynamic parameters, structure-dependant parameters, topological parameters and charge-dependant parameters. Multiple linear regression analysis was carried out on all the molecules. The final equation was developed by choosing optimal combination of descriptors after removing the outliers. Cross validation was performed by leave one out method to arrive at the final QSAR model for the chosen set of molecules to exhibit antihyperglycemic activity.

Diabetes mellitus is a major health concern especially in the urban world. Studies showed that there are 150 million people suffering from diabetes mellitus and by 2025 it is estimated that the fi gure would rise to 300 million [1]. Over 90% of the diabetes mellitus patients are type-2 patients [2]. Type-2 diabetes mellitus is now considered as a life-style disease and is usually associated with urbanization, mechanization and change in life-style habits [3]. This disease is characterized by insulin resistance and cardiovascular dysmetabolic syndrome. The conventional therapy of type-2 diabetes mellitus (sulphonylureas) has not been satisfactory as it is not successful in treating associated cardiovascular risk factors, which is the major cause of morbidity. The current trend is, therefore, to make the therapy better by choosing appropriate combination of available drugs. A parallel search for newer drugs is also being made.

Thiazolidine-2,4-diones are the class of oral hypoglycemic agents which increase insulin sensitivity at target tissues like liver and skeletal muscles. In addition, it also improves the markers of cardiovascular risk factors by decreasing the free fatty acids and altering the lipoprotein metabolism.

Thiazolidine-2,4-diones act on Peroxisome proliferator activating receptor-γ (PPAR-γ) receptors [4] which regulate the gene expression mainly in the adipose tissues. PPAR-γ is a member of subfamily, which belongs to a 48 member nuclear receptor super family. After binding with thiazolidine-2,4-diones, a conformational change occurs in the receptor which leads to the binding of a co-activator protein [5]. Rosiglitazone and pioglitazone molecules from the class of thioglitazones available in the market are showing severe adverse effects. The development of drugs from this class of compounds through lead optimization or through sophisticated computeraided drug design (CADD) techniques is, therefore, the current need of the hour. The present QSAR study on various thiazolidine-2,4-diones attempts to address this need by arriving at the physico-chemical properties required for high antihyperglycemic activity in the form of a mathematical equation, according to the Hansch type of analysis [6-9]. This study should, therefore, help in designing newer molecules with better antihyperglycemic activity.

c (Calculated activity), e (experimental activity). Molecules and their structures considered for the 2D-QSAR study along with experimental, calculated and residual activities.

*Only compound no 68 has substitution at A’. Molecules and their structures considered for the 2D-QSAR study along with experimental, calculated and residual activities.

*n = Number of molecules on which regression analysis was performed. Multiple linear regression equations developed along with the statistical parameters for all the 74 thioglitazones considered for the QSAR study and for the fi nal set of 50 thioglitazones.

All the 74 molecules were sketched using ALCHEMY 2000 (TRIPOS, USA) [11] software and were subjected to energy minimization by using molecular orbital pac (MOPAC) method [12]. MOPAC calculations are semi-empirical calculations based upon a quantummechanical approach, used to optimize the geometry of a molecule depending on the charges on its various atoms. The pHGA was taken as the biological activity variable and the pTLA was considered as an experimental descriptor in the QSAR analysis. The triglyceride lowering action of thiazolidinediones is known to be the main cause of hypoglycemic action and, therefore, should show a strong correlation.

All the atoms were initially assigned a charge zero when calculating charges by the Gastiger-Marsili method. Through a reiterative routine, this method shifts charges from a less electronegative to a more electronegative atom, using the damping factor whose value is distance dependant. The latter prevents equalization of charges among the atoms. The fi nal charge depends only on the nature of atoms and their connectivity to other atoms and not on the 3D structure of the molecule. All charges are expressed as a fraction of the electron charge.

Multiple linear regression analysis and other statistical analysis were carried out on all the 74 molecules. The outlier molecules were then removed to improve the equation’s predictive power. The fi nal set of equations was obtained using 50 molecules and the best equation was obtained by using the optimal combination of descriptors. Descriptors were selected for the final equation based on their correlation coeffi cients and those descriptors having intercorrelation coeffi cient below 0.7 were considered, to select the best equation. Cross validation by leave one out method was carried out on these final set of 50 molecules to further enhance and validate the predictive power of the equation. Acceptability of the regression equation was judged by examining the statistical parameters.

The initial regression analysis was performed on all the 74 molecules which resulted in regression equation with poor predictive power (Table 6, Equation 1). The plot of pHGAcalc versus pHGAexp for this equation is given in fig. 1. The plot indicated the presence of many outliers and that could be a possible reason for the poor predictive power. Molecules which affected the equation adversely were, therefore, considered as outliers and were removed to enhance the predictive power. The calculated antihyperglycemic activities of the 24 outlier compounds are not reported in Tables 1-5. Multiple linear regression equations developed for all the 74 molecules and the final set of 50 compounds along with the statistical parameters are given in Table 6. 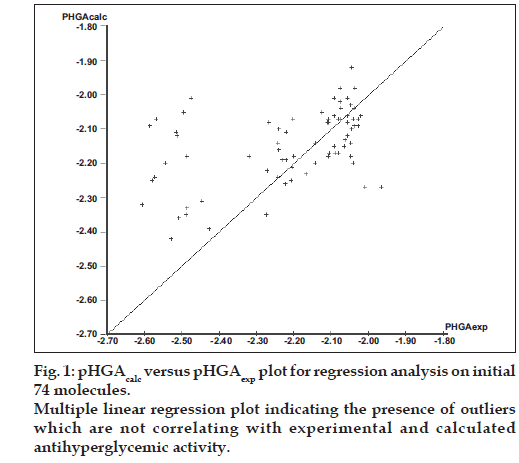 Figure 1: pHGAcalc versus pHGAexp plot for regression analysis on initial 74 molecules.
Multiple linear regression plot indicating the presence of outliers which are not correlating with experimental and calculated antihyperglycemic activity. 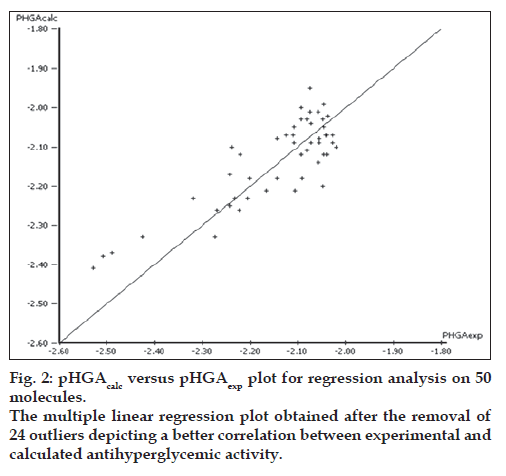 Figure 1: pHGAcalc versus pHGAexp plot for regression analysis on 50 molecules. The multiple linear regression plot obtained after the removal of 24 outliers depicting a better correlation between experimental and calculated antihyperglycemic activity.

The final regression analysis was performed on a set of 50 molecules after exclusion of the outliers from the original training set. Removing the outliers considerably increased the predictive power of the equation as seen in Eqn. 2. Eqn. 2 showed a good regression coefficient but did not show a favorable F-statistical value. This may be due to the self fitting of the regression equation as more number of descriptors was used. To increase the F-statistical value, the descriptors which did not affect the regression equation were sequentially removed. Eqn. 3 was thus obtained by doing so. The pHGAcalc versus pHGAexp plot for this equation is shown in fi g. 2. However, there was no further improvement in the predictive power of the equation despite removing related parameters which in turn indicated the importance of their presence in the model.

Cross validation was performed using leave one out method (LOO) on these final 50 molecules. Cross validation process eliminates one compound from regression and predicts the activity for the remaining molecules in the set. The best QSAR model developed out of the 50 molecules was equation 5. This equation was obtained for 49 molecules, after leaving compound 30. The pHGAcalc values for the final set of 49 molecules according to the final equation (Equation 5) are given in Tables 1-5. The Eqn. 4 obtained after removing the compound 11 was also impressive but not good when compared to Eqn. 5 in terms of statistics.

The best QSAR Eqn. 5 indicates that triglyceride lowering activity is one of the important descriptors. It is also well known experimentally that reduction of triglyceride levels leads to reduction in blood glucose levels. The LogP value (partition coeffi cient), which plays an important role in the passage of the drug across the phospolipid bilayer during absorption, is also playing an important role in exhibiting antihyperglycemic activity of the titled compounds. Parameters such as dipole moment (which depends on the presence of polar bonds), molecular polarisability or specifi c polarisability (which in turn depends on the polarity of the molecule), Volume (which plays an important physical role in binding to the receptor and in this case the PPAR-γ) and Third order molecular shape indices (which encodes an atom’s identity involved in assessing the shape of a molecule towards the desired target) also play important role. The sum of charges on nitrogen and oxygen atoms in the molecule (ABSQon) also seems to be quite important in terms of enhancement of the electron density due to the higher electronegativity of these atoms.

The developed QSAR model can be utilized for the further development of new molecules belonging to the class of thioglitazones to exhibit good antihyperglycemic activity, as it reveals the various physico-chemical parameters that play important roles in exhibiting potential antihyperglycemic activity. Work in this direction is in progress and will be reported in our next publication. Based on the developed QSAR model, it may be concluded that partition coeffi cient, polarity, polarisability, volume, number of nitrogen and oxygen atoms in relation to their charges and the molecular shape of the molecule are the properties that are to be considered apart from triglyceride lowering activity (experimental parameter), while designing newer thioglitazones, for their potential antihyperglycemic activity.

All the authors are indebted to the AICTE for providing software tools through the MODROBS scheme in the year 2000.