Quality control standards for the roots of Three Plumbago species

Physicochemical parameters of roots of three Plumbago species, Plumbago capensis, P. rosea and P. zeylanica belonging to Plumbaginaceae were analyzed. Microbial contamination, aflatoxins, pesticide residue and heavy metal content were also determined. Attempt has also been made to estimate the biologically active chemical plumbagin present in them and the data compared. The study ensures that the quality control parameters do help in the proper standardization of the crude drugs in drug development process for global acceptance.

Standardization of raw drugs in herbal industry is an important step towards quality control. Several analytical parameters such as physico–chemical constants, estimation of elements, heavy metals, microbial contamination, aflatoxins and pesticide residue are to be carried out as a measure of quality check. The World Health Organization [1] emphasized certain quality standards and has proposed certain guidelines for the assessment and development of standard herbal products. The plant Plumbago zeylanica of Plumbaginaceae known as Chitraka/ Chitramoolam is a popular drug in Ayurveda and Siddha [1]. It finds place in several of the compound formulations of these systems of medicine, as one of the ingredients [2,3]. In times of scarcity of P. zeylanica roots, the roots of the related species namely P. capensis and P. rosea, which are indigenous to India are often used. The roots of three species are recognized due to the presence of naphthaquinones namely plumbagin and its derivatives. The roots of P. rosea and P. zeylanica have been evaluated for activities [4,5]. The paper deals with the physico-chemical standards such as loss on drying at 105°, ash, acid-insoluble ash, water soluble ash, crude fibre content, alcohol soluble extractive, water soluble extractive, analysis of heavy metals and other elements, pesticide residues, aflatoxins, microbial contamination and assay of plumbagin through HPTLC for the roots of three Plumbago species.

Roots of P. capensis were procured from the local market at Nagercoil, Tamil Nadu. Roots of P. rosea and P. zeylanica were collected from Erode and Arakonam near Chennai, Tamil Nadu, respectively. The crude drugs were identified at Captain Srinivasa Murti Drug Research Institute for Ayurveda and Siddha (CCRAS), Arumbakkam, Chennai, India. Voucher specimens of P. capensis (00583), P. rosea (00502) and P. zeylanica (00518) have been deposited in the herbarium of this institute.

The roots of the plants were given a quick wash with water, shade dried and coarsely powdered. The powdered samples were weighed (each 1 g) into separate conical fl asks and treated with 5 ml of concentrated nitric acid. The fl asks were covered with watch glasses and heated for an hour; the contents of the fl asks were treated with additional 5 ml of nitric acid, followed by 2 ml of 30 % hydrogen peroxide solution. The heating was continued till the clear solution was obtained. The mixture was diluted with deionised water and filtered through Whatman No. 42 filter paper and the solutions were made up to 50 ml [9].

Afl atoxins were determined by Kobra cell technique using Agilent HPLC instrument as per the method ASTA [10]. Pesticide residues were analyzed using GC-MS Agilent instrument equipped with mass selective detector as per the method AOAC [8]. For determination of microbial load, 1g of each sample was weighed accurately in separate flasks and 99 ml of sterile distilled water was added. The samples in the flask were kept in a mechanical shaker for few minutes to obtain uniform suspension of microorganisms. The dilution is 1:100 or 10-2 from, which 1 ml was transferred to 9 ml of sterilized distilled water to make a 1:1000 dilution and this procedure was repeated up to 10-6 dilution. Each 0.1 ml of serially diluted sample was inoculated to the sterile plates containing nutrient agar, SS agar and potato dextrose agar (PDA) by spread plate method. Nutrient agar and SS agar plates were incubated at 37º for 24 h and PDA plates were incubated at room temperature for 3-5 days. Bacterial and fungal colonies were counted using a colony counter [6].

For the estimation of plumbagin, 1 g of each of coarsely powdered root samples of P. capensis, P. rosea and P. zeylanica were weighed accurately and extracted exhaustively with chloroform (50 ml) in a Soxhlet apparatus. The chloroform extract was filtered, concentrated and made upto 5 ml in volumetric flask [11-15]. The standard solution was prepared by dissolving 10 mg of plumbagin in 10 ml of chloroform. From this stock solution, 1 ml was pipetted out into a 10 ml standard flask and made up to the mark. Sample solution of the roots of P. capensis 5 μl, P. rosea 5 μl and P. zeylanica 10 μl and different concentrations of standard solution varying from 2 to 10 μl of plumbagin were applied on aluminium plate precoated with silica gel 60F254 0.2 mm thickness on different tracks as 6 mm bands by a Camag Linomat applicator V. The plate was developed in a twin trough glass chamber presaturated with toluene:ethyl acetate (4:1) and allowed to run upto a distance of 8 cm. After air drying, the plate was visualized under UV at λ 254 and 366 nm and scanned using scanner 3. Calibration graph was obtained with plumbagin ranging from 200 to 1000 ng (correlation coefficient, r= 0.99946).

Values are mean of 3 readings

The different inorganic elemental content present in the plant part studied are shown in Table 2. Iron is the most indispensable metal to humans and its deficiency is characterized by anemia. The root of P. rosea contained significant amount of iron which is diuretic, demulcent and useful in the treatment of dysentery and croup [16]. Copper deficiency is characterized by chronic or recurrent diarrhea, low resistance to infection and anemia [17,18]. The maximum concentration of copper was found in P. zeylanica, which may be used to cure anemia, rheumatism and emetic conditions. Manganese is essential for haemoglobin formation. It is essential for growth, reproduction and skeleton development in humans [19,20]. The maximum concentration of manganese was observed in P. zeylanica>P. rosea>P. capensis, which are used in skin diseases, scabies, piles and rheumatism [21,22]. Zinc is a component of many metalloenzymes and also a membrane stabilizer and a stimulator of the immune response [23,24]. Its deficiency leads to loss of appetite, and impaired immune function. In more severe cases, zinc deficiency causes hair loss, diarrhea, delayed sexual maturation, impotence, hypogonadism in males, and eye and skin lesions [25,26]. The zinc content was high in P. zeylanica while the amount is almost equal in P. capensis and P. rosea, which may be useful in skin diseases and rheumatism.

Chromium plays a vital role in metabolism of carbohydrates and its deficiency leads to diabetes in human body. Chromium deficiency leads to hyperglycemia, growth failure, cataract and arteriosclerosis [27-29]. The maximum content of chromium was seen in P. capensis followed by P. zeylanica and P. rosea which justified the use of the root in Ayurveda and Siddha systems of medicines for diabetes.

Sodium is involved in intracellular and extracellular fluid balance and the maintenance of the viscosity of blood [29,30]. Sodium plays an important role in the transport of metabolites. The maximum content of Sodium was seen in P. capensis followed by P. rosea and P. zeylanica. Potassium is a diuretic. Both sodium and potassium take part in ionic balance of the human body and maintain tissue excitability [29]. The maximum content of Potassium was seen in P. rosea. Calcium plays an important part in nerve-impulse transmission and in the mechanism of neuromuscular system [29]. Calcium content was in the order of P. capensis>P. zeylanica>P. rosea (Table 2). 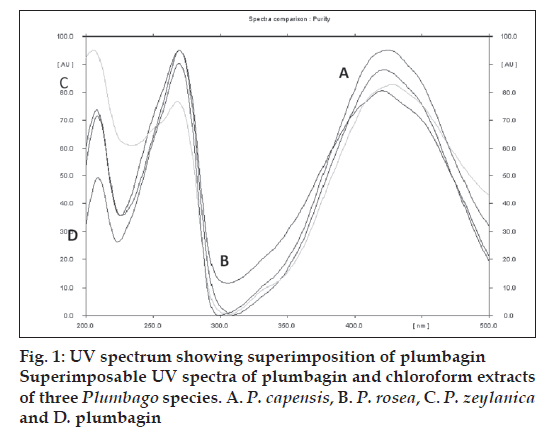 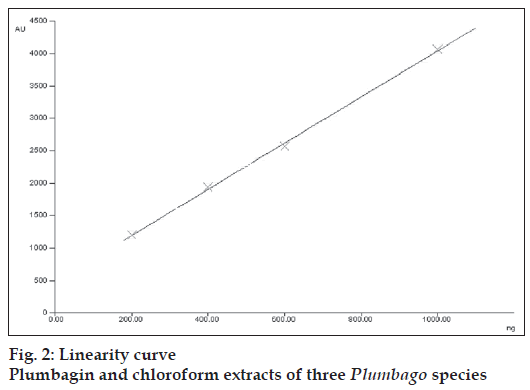 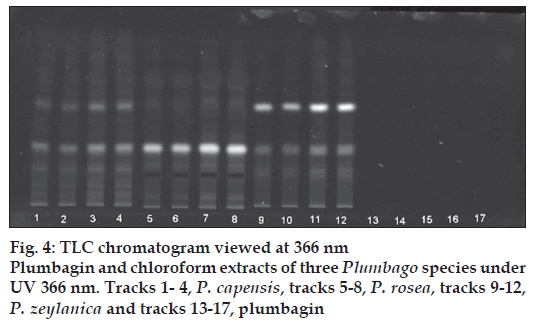 Values in ppm. Permissible limits are as per the Ayurvedic Pharmacopoeia of India, 2008