The aim of this investigation was to develop a spectrophotometric method in the visible range for quantitative determination of Fe3+ in a pharmaceutical formulation based on complexation with methylthymol blue. The reaction occurred at a temperature of 30° and the absorbance remains constant after 25-30 min; the blue-colored resulting complex had a maximum absorption at 628 nm. The combination ratio was established through the Job’s method of continuous variations. In acetate buffer (pH=5), Fe3+ forms a complex of 1:1 with methylthymol blue. Lambert-Beer law was obeyed to the concentration area of (2-6) µg/ml; the calibration curve is described by the regression line A= 0.1025° (µg/ml) -0.0013 with a correlation coefficient of R2= 0.9997. For the validation of the method the following parameters were studied, linearity, accuracy, limit of detection, limit of quantification and retrieval. Confidence interval of the average retrieval ranged from 98.79 to 101.13 %. The non-interference of excipients in the solution makes the method suitable for routine dosage of iron in polymaltose complexes. This visible spectrophotometric method was applied to determine Fe3+ concentration in polymaltose iron complex. The validation parameters confirmed that this method could serve to determine Fe3+.

Iron is an essential trace element; the adult human body contains 3-4 g iron [1,2]. Most of it is found in hemoglobin. The most important function of this protein is to transport O2 and CO2 between the lungs and different tissues and to regulate blood pH [3,4]. Iron has various well-established clinical uses, such as the prevention and treatment of iron-deficiency anaemia. The occurrence of iron in two oxidation states (Fe2+, Fe3+), as well as the balance between these two forms are important for the biological systems that use iron in the metabolic processes [5]. Also, iron oxides are materials used as inorganic dyes, pigments for cosmetics and food additives [6,7]. Although various methods have been developed for quantitative determination of iron, spectrophotometry is most frequently used due to multiple advantages such as sensitivity, fidelity, rapidness, simplicity and low cost [8-10].

Kinetic methods based on catalytic reactions for iron determination (in traces) have been applied because they present high sensitivity and the procedures and equipment are relatively simple [11,12]. In the field of pharmaceutical analysis, an important element is the determination of metal ions. There are sensitive and selective methods for their determination, but they have the disadvantage of involving expensive instruments [13]. Several analytical methods have been developed for quantitative analysis of iron. These include spectrophotometry [14-16], flux injection analysis [17], voltammetry [6,18], chromatography [12], capillary electrophoresis, atomic absorption and emission spectrometry [11].

Sample stock solution was prepared by measuring with precision 1 ml of polymaltose iron solution and boiling it for 5 min in a water bath in the presence of concentrated HNO3 (1 ml) and concentrated HCl (5 ml). After cooling, the solution obtained was quantitatively transferred in a 100 ml volumetric flask and the volume was made up to the mark with double-distilled water. An aliquot of 0.4 ml was taken from this solution and diluted with pH= 5 buffer solution in a volumetric flask at 50 ml. All solutions were prepared daily. Figure 1: Spectra for all the concentration
Spectra were recorded in the spectral range of 200-800 nm 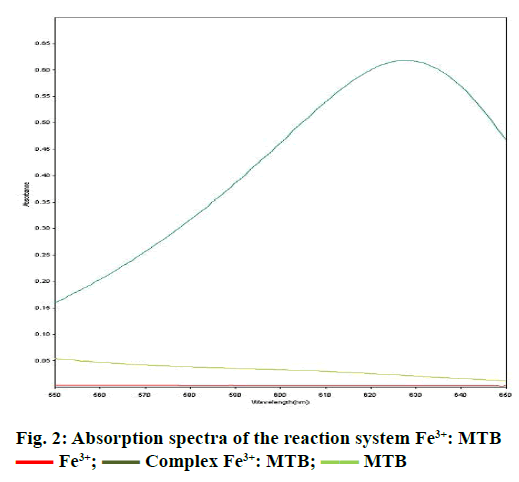 Isomolar solutions were used for establishing the combination ratio. Job's [10] method was used, in which the complex combination is formed between Fe3+ and MTB. Eleven series of solutions were prepared, which contained a volume V1 ml of metallic cation solution (with mole fractions between 0 and 1), a volume V2 ml of added solution (with mole fraction between 1 and 0), where V1+V2= constant.

Sample absorbencies were determined at 628 nm against a blank solution containing all reagents except for Fe3+ ions. The data obtained were used for the graphic representation of the absorbance against the mole fraction. Absorbencies were graphically represented according to the respective reagent mole fraction of the metallic cation. The combination ratio was 1:1. Job's curves are shown graphically-absorbance variation measured at the maximum of the spectrum for the complex 1:1, absorbance according to the mole ratio of the reagent and the mole ratio of the cation (Figure 3).

Formation kinetics of the Fe3+:MTB complex

In order to find optimal complex formation conditions, the influence of pH, buffer concentration, reaction time and temperature were monitored separately. The absorption spectre of the complex at different pH levels of 3.6, 5 and 6 was aimed at. Similarly, concentration of the buffer solution (0.1, 0.5, 1 and 2 M) at different temperatures (25, 30 and 37°) was monitored. The optimum conditions for the reaction to occur were, pH 5, buffer solution (1 M), minimum reaction time of 25-30 min and a temperature of 30°. The absorbance remained constant for 90 min (Figure 4). 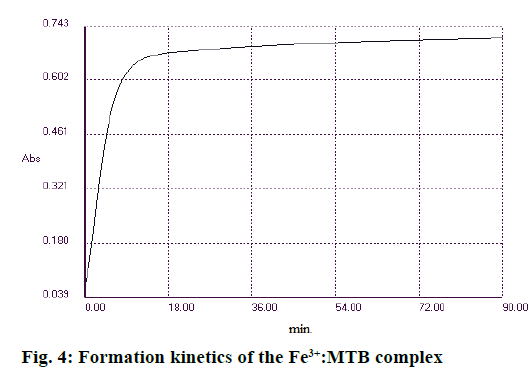 After establishing the conditions for the formation of the complex (pH, buffer concentration, reaction time, temperature) series of solutions were prepared containing equal standard/sample volumes and MTB; they were kept at 30° in water bath for 30 min. Absorbencies of the sample (As) and absorbencies of the standard (Ast) were measured at 628 nm. The quantity of Fe3+ in pharmaceutical formulation (M iron) was calculated according to the dilutions performed with the following Eqn., M iron = 25 000×As×Cst/Ast (mg/ml), where, 25 000 is the dilution coefficient, As- absorbance of the sample, Cst- concentration of the standard (mg/ml), Ast- absorbance of the standard.

Validation was performed according to the guidelines of ICH Q2(R1) [19]. The linearity of the visual spectrophotometric method was checked by means of the calibration line method. The calibration line consisted of five points and it was computed in Microsoft Excel. The calibration curve obtained by applying the spectrophotometric method in the visual was linear regarding the studied concentration ranges. Calibration curves were plotted through linear regression, y= ax+b, where y represents the absorbance and x is the concentration (μg/ml). The parameters of linear regression were calculated: a= slope, b= the intercept, R2= correlation coefficient (Figure 5). 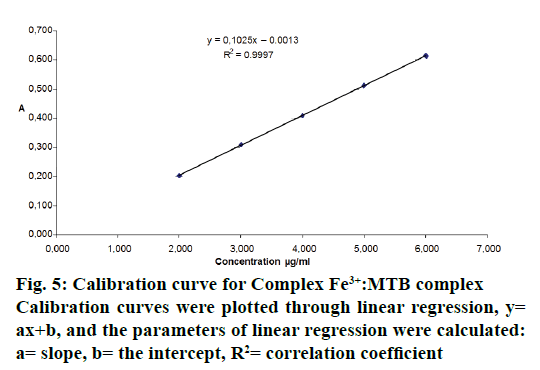 In order to study the linearity and accuracy, five samples were prepared with the following concentration levels i.e. 60, 80, 100, 120 and 140 %. The calibration curve obtained by applying the spectrophotometric method in the Vis is linear on the 2-6 μg/ml concentration range. Within this interval, the correlation coefficient had the value of 0.9997. Also, for determining the linearity of the method, other parameters were evaluated, such as, the homogeneity of variances, the existence of a significant slope, the validation of regression lines and the comparison of intercepts with 0. Table 1 presents the statistical parameters that were evaluated for determining the linearity of the spectrophotometric method.

Table 1: The statistical parameters for determining the linearity of the spectrophotometric method

Correlation coefficient is 0.9997 (Table 1) and the Student test-intercept presented t<ttheoretical in both cases (standard and pharmaceutical formulation) for Fe3+. The variances of the five groups of determinations (k= 5) need to be homogeneous for a probability of error of 5 % for the calibration line. This was checked through the application of the Cohran test. Table 1 showed that Ccalculated= 0.280 is lower than Ctheoretical= 0.540; variances are considered homogeneous. The existence of a significant slope was verified with the help of the Fisher statistical test. The value Fcalculated= 43625.16 is higher than the value Ftheoretical= 4.67; the regression line presents significant slope. The validation of the regression line was verified through the application of the Fisher test, where Fcalculated= – 2.94 is lower than Ftheoretical= 3.71; the regression line for the analysis of the Fe3+ standard is valid.

The comparison of the intercepts with 0 was carried out by means of the Student t test. The calibration line can be used in quantitative calculations if the intercept differs considerably from 0. If it does not differ significantly from 0, the 100 % standard solution will be used as reference (the sample contains the analyte in the expected concentration).

Accuracy shows how close the results obtained are to the reference values. The accuracy of the method was verified for the whole range of linearity and for all the five levels of concentration. The absorbance represents the average of three determinations for each concentration level. The results presented in Table 2 showed that accuracy was 98.79-101.13 %.

Table 2: The accuracy of the spectrophotometric method

For determining accuracy, the homogeneity of ingroup variances (the Cohran test) and the validity of the average found were evaluated. The interpretation of the values obtained for these parameters is done by comparing the calculated values to the theoretical ones. The method is considered exact if in-group variations are homogenous Ccalculated<Ctheoretical (0.45<0.69). The validation of the average found is done by means of the Fisher test (the comparison of in-group errors to intergroup errors). The validation of the repeatability of the method was performed on different days, on six samples that had been individually prepared (pharmaceutical formulation), situated at a concentration level of 100 % (Table 3).

Table 3: The fidelity of the spectrophotometric method

Table 4: The fidelity of the spectrophotometric method statistical evaluation

LOD: limit of detection and LOQ: limit of quantification

Table 5: The limit of detection and quantification for determining Fe3+

The non-interference of excipients in the solution made the method suitable for routine dosage of iron in polymaltose complexes. Visual spectrophotometry also allowed for quantitative determination of Fe3+ in pharmaceutical formulations, which represented the main aim of the study performed. The Fe3+:MTB complex presents a combination ratio of 1:1 and displays corresponding stability.

The visual spectrophotometric method developed and validated in this way was applied for Fe3+ dosage in polymaltose iron complexes. The validation of the visual spectrophotometric method for the determination of Fe3+ in iron polymaltose solution was carried out through the study of the following parameters: linearity, accuracy, repeatability and reproducibility. The validation parameters confirm the applicability of the method with the pursued aim. The method proposed is simple, adequate for laboratory practice and it has been successfully used for quantitative determination of polymaltose iron in commercial pharmaceutical products.