A forced degradation study on roflumilast drug substance was conducted under the conditions of hydrolysis, oxidation, thermal and photolysis. The method was developed and optimized by analyzing forcefully degraded samples. The best separation was achieved on a Zorbax SB C18 1.8 Î…m column with 0.005 M ammonium formate buffer pH 3.5 and acetonitrile as mobile phase in a 13 min run time. The proposed method was able to resolve all the possible degradation products formed during stress study. The drug was stable to neutral, thermal and photolytic conditions but unstable to acidic, alkaline and oxidative conditions at 80ÎŠ for 24 h. The degradation products resulting from stress study did not interfere in assay and related substances of roflumilast and thus the method can be regarded as stability indicating. An alternate method was also developed on a conventional 250Χ4.6 mm, 5 Î…m column wherein runtime was 38 min. Thus rapid resolution high throughput column was able to reduce the run time from 38 min to 13 min.

Roflumilast is a novel, potent, selective phosphodiesterase 4 (PDE4) inhibitor for the treatment of chronic obstructive pulmonary disease (COPD) and asthma (fig. 1). Its empirical formula is C17H14Cl2F2N2O3 and its molecular weight is 403.21. There is no reported method for the analysis of rofl umilast in the presence of its degradation products. In the absence of an offi cial rofl umilast monograph in the pharmacopoeias, including the European Pharmacopoeia, British Pharmacopoeia and United States Pharmacopoeia, development of such a method would prove useful for the industry. The objective of this work was, to develop a simple, economic and rapid HPLC method for the quantitative analysis of rofl umilast. 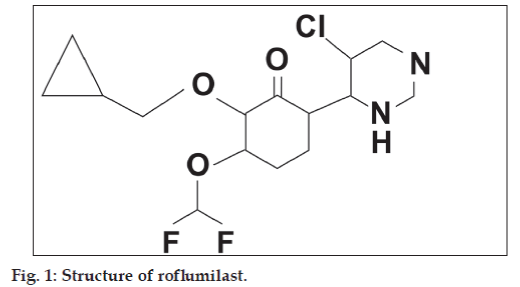 The chromatographic separation was achieved using gradient elution (Table 1) consisting of 0.005 M ammonium formate buffer pH 3.5 and acetonitrile on a Zorbax SB C18 50×4.6 mm, 1.8 μm column. Flow rate was maintained as 0.5 ml/min. The column was thermostated at 25º and the injection volume was 3 μl. The UV wavelength of detection used was 215 nm. Roflumilast solution of concentration 150 μg/ ml was prepared in acetonitrile and chromatogram is depicted in fig. 2. Rofl umilast was stressed under different conditions to promote degradation [1,2]. Solutions of the rofl umilast in acidic, neutral, alkaline and oxidative media were prepared and subjected to forced degradation. 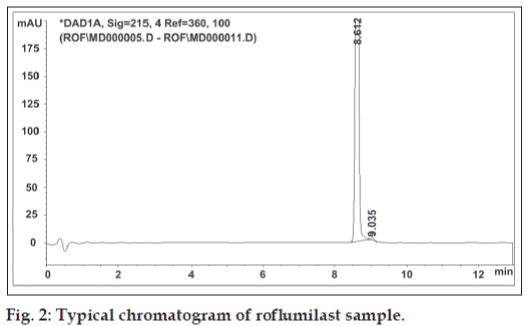 Solution for hydrolytic degradation was prepared by weighing accurately about 15 mg of rofl umilast in different 20 ml volumetric flasks. Roflumilast was dissolved in 1 ml of acetonitrile and kept in hot air oven for 24 h at 80º after adding 5 ml of 0.1 N HCl for acid hydrolysis, 5 ml of 0.1 N NaOH for base hydrolysis, 5 ml of water for neutral hydrolysis, individually. After heating, acid hydrolysis solution was neutralized with 0.1 N NaOH and base hydrolysis solution was neutralized with 0.1 N HCl.

Solution for oxidative degradation was prepared by weighing accurately about 15 mg of roflumilast in a 20 ml volumetric flask and dissolving in 1 ml of acetonitrile. The flask was kept in hot air oven for 24 h at 80º after adding 5 ml of 30% hydrogen peroxide. The chromatograms for alkaline, acidic and oxidative degradation are depicted in fig. 3, fig. 4 and fig. 5, respectively. 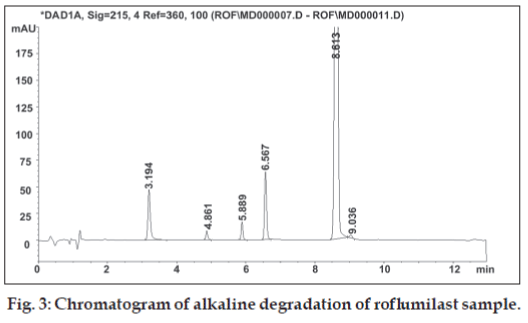 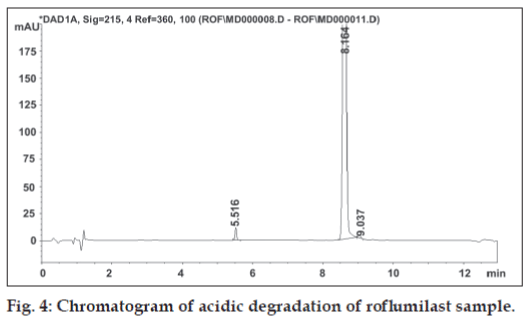 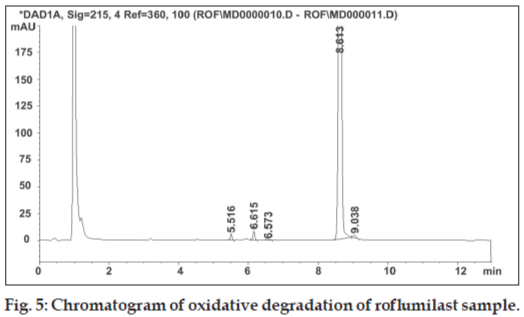 Replacement of acetonitrile by methanol resulted in merging of two degradation peaks observed in alkaline degradation of roflumilast. A gradient run using 0.1% formic acid and acetonitrile with organic concentration varying from 10 to 90% of aqueous phase over 20 min eluted the rofl umilast at 11.1 min. The gradient run was modifi ed to have short run time of 13 min. Other buffers of 0.005 M strength tried were ammonium formate pH 3.5, phosphate buffer pH 2.4 [5], mixed phosphate buffer pH 6.6 [5], ammonium acetate buffer pH 5 and ammonium bicarbonate buffer pH 7. Aqueous phase of 0.1% formic acid solution was too low in buffer capacity hence not considered for further method development process. Change in aqueous phase exerted imperceptible effect on retention time and peak shape of roflumilast. Comparison of various aqueous phases is shown in Table 2. Mobile phase pH from 2.4 to 7 did not have any influence on the retention time of roflumilast. Ammonium formate buffer pH 3.5 was preferred over other buffers due to less interference and its volatile nature as this can also be used for a LCMS method. The forced degradation behaviour of rofl umilast under different forced degradation conditions is summarized in Table 3. Stress testing showed that all degradation products were well separated from roflumilast, confi rming its stability-indicating capability.

All stressed samples, both solid and in solution, remained colourless. Forced degradation results prove that roflumilast is stable under neutral condition while in 0.1 N hydrochloric acid it shows low degradation. The rate of hydrolysis of rofl umilast was found to accelerate in alkaline condition resulting in 18.4% degradation. Under oxidative condition, rofl umilast shows three unknown impurities having major impurity of 1.1% at RRT 0.72. The drug was stable to thermal and photodegradation as indicated by no increase in the area of impurity peak.

A simple, economic and rapid HPLC analytical method with UV detection has been developed for the determination of rofl umilast active pharmaceutical ingredient using a Zorbax SB C18 50 mm × 4.6 mm column with 1.8 μm particle size. The low run time of 13 min enables rapid determination of the drug, which is important for the routine analysis. A method was also developed on a conventional C18 250×4.6 mm column wherein run time was 38 min.

The method seems to be suitable for the quality control in the pharmaceutical industry because of its sensitivity, simplicity, selectivity and short run time. Time required for the analysis of 50 injections using 38 min run time method on 250×4.6 mm column will be approximately 31.6 h. The same analysis can be completed in 11 h using 13 min run time method on 50×4.6 mm column packed with 1.8 μm particles excluding column equilibration time for both the columns. This indicates use of 1.8 μm short column offers several advantages such as low run time, higher productivity and low solvent consumption resulting in cost reduction and being environment friendly.