The present study was aimed to identify and to quantify the phytoconstituents by gas chromatography-mass spectrometry, reversed-phase high-performance liquid chromatography techniques and further to evaluate their in vitro antioxidant potential. In this study, the roots of Clerodendrum serratum Linn. was subjected to soxhlet extraction using n-hexane, chloroform, ethyl acetate and ethanol solvents and the obtained extracts (CSRH, CSRC, CSREA and CSRA) were analyzed by gas chromatography-mass spectrometry technique. The caffeic acid and beta-sitosterol were quantified from the extracts using reversed-phase high-performance liquid chromatography technique. Total phenolic and flavonoid content were determined using established methods viz. Folin-Ciocalteu and aluminium chloride colorimetric assay. Antioxidant potential was assessed using in vitro methods such as 2,2-diphenyl-1-picrylhydrazyl scavenging activity; ferric reducing ability of plasma assay and total antioxidant activity. The gas chromatography-mass spectrometry analysis revealed the presence of 48 compounds, out of which 41 compounds were identified and among them caffeic acid and beta-sitosterol were quantified using reversed-phase high-performance liquid chromatography technique. The abundance of phenolic and flavonoid content was found in CSREA and CSRA fractions. The half maximal inhibitory concentration values of 2,2-diphenyl-1-picrylhydrazyl assay was found to be 1.24, 3.36, 10.61 μg/ml for the CSRA, CSREA and CSRC fractions respectively and the total antioxidant activity was found to be 960±0.25, 766±0.14 and 816.6±0.28 μg/mg for the CSRC, CSREA and CSRA fractions respectively showing strong antioxidant activity. The ferric reducing ability of plasma assay showed strongest reducing power for CSRA and CSREA fractions. The results showed that the CSRA and CSREA fractions had strong antioxidant potential. It may be concluded from the results that the Clerodendrum serratum Linn. roots possesses significant antioxidant potential may be due to presence of potent phenolic and flavonoid compounds and these finding supports the traditional use of plant to treat the oxidative stress and related disorders.

Clerodendrum serratum (C. serratum) Linn. is a small perennial woody shrub of the Verbenaceae family and it is generally known as Bharangi in India[1]. It is native to India and growing in moist deciduous forests of Western Ghats of India[2]. Traditionally the different parts of this plant were used in the treatment of asthma, inflammation and infectious conditions[1]. It has been described that, this plant shows diverse range of biological activities including hepatoprotective, analgesic, antioxidant, anti-inflammatory, antibacterial, anticancer and antiasthmatic activity[3-15]. The earlier study revealed the presence of pharmacologically active constituents include oleanolic acid, lupeol, ursolic acid, serratin, β-sitosterol, γ-sitosterol, spinasterol, α-spinasterol, stigmasterol, 7-β-coumaroyl-oxyugandoside, serratoside A, serratoside B, (+)-catechin, caffeic acid, ferulic acid, Apigenin-7-glucoside, luteolin 7-O-β-D-glucoronide, luteolin, glucose and sucrose[15-22].

It is evident from the studies, stressful situations leads to generation of free radicals in living organisms. Under normal situations, cellular antioxidant system maintains balance which gives protection to organism. On the other hand, imbalance leads to accumulation of free radicals resulted from metabolic reaction at cellular level which leads to various types of diseases like ageing, neurodegenerative diseases, central nervous system related disorders, mutagenic disorders etc. and the antioxidants are the compounds which scavenge these radicals and inhibit damage produced due to reactive oxygen and nitrogen species. Hence, the search for natural antioxidants has become a burning subject across the globe[23,24].

The roots of C. serratum Linn. were collected from Paithan, Ahmednagar, Maharashtra state, India (GPS coordinates 19.43821° N 73.9159° E), in the month of April 2014. They were identified and authenticated by Dr. K. J. Salunke of the Department of Botany, P.V.P. College of Arts, Science and Commerce, Pravaranagar. A voucher specimen (V.No.HD-402) of the same was submitted at the Herbarium Department. The fresh roots of the plant were cleaned, washed under tap water, dried under shade for 15 d, powdered coarsely and kept in airtight container for further use.

All the chemicals were purchased from SD Fine chemicals, Mumbai. The solvents used for extraction and for assays were of analytical reagent grade.

Extraction and fractionation of crude extract:

500 g powdered roots were subjected to the maceration in 4.5 l absolute ethanol (99.9 %) at 40°-45° for 3 d (1.5×3), the crude extract was filtered using Whatman filter paper and concentrated under reduced pressure using rotary evaporator (Heidolph Labrota 4000 Efficient, Germany). The crude extract was brown in color and the percent yield was 5.53 %.

The GC-MS analysis was performed by using the TRACE™ 1300 gas chromatography instrument coupled to the mass spectrometer (Thermo Scientific TSQ 8000, Austin, TX, United States of America (USA)). The compounds were separated on a TraceGOLD TG 5 MS 30 m×0.25 mm internal diameter (i.d.) capillary column coated with 0.25 μm films. Helium was used as carrier gas with a constant flow rate of 1 ml/min. The temperature of injector and detector was kept at 250°. The oven temperature was programmed from 60° to 280° at a rate of 6°/min. The final temperature was held constant for 10 min and the transfer line temperature was 280°. Electron impact mass spectra were measured at acceleration energy of 70 eV. Manual injection of 1.0 μl of the solution of isolated compound was performed in the split mode at a 20:1 split ratio. The interpretation of GC-MS was conducted using NIST MS SEARCH 02 mass spectral library[27].

To quantify the phytoconstituents, the RP-HPLC analysis was carried on Younglin Acme 9000 series HPLC system. The separation modules involve Ultraviolet-Visible (UV-Vis) detector (UV 730 D), Thermo C18 cartridge reverse phase column (spherical silica particle size 5 mm, 4.6 mm i.d.×250 mm length) at ambient temperature. The mobile phases was prepared fresh and reported in Table 1. The gradient system was used and flow rate was adjusted to 0.7 ml/ min. The injection volumes were 20 μl and quantified at different wavelengths. The solutions of standards (caffeic acid and β-sitosterol) were prepared in CH3OH. Calibration curve of standard samples were prepared by using different concentrations and concentrations of the phytoconstituents in various fractions were determined by Autochro-3000 data acquisition system[28].

TPC was estimated by Folin-Ciocalteu reagent using previously reported method with some modifications[27,29]. TPC of various fractions of C. serratum roots were determined using calibration curve of standard Gallic Acid (GA). The calibration curve was prepared by mixing 0.5 ml aliquots of 10-100 μg/ml methanolic GA solutions with 2.5 ml Folin-Ciocalteu reagent and 2.5 ml of 7.5 % sodium carbonate. All mixtures were kept for incubation at room temperature for 30 min and the absorbance of blue-colored complex was measured at 765 nm. All determinations were carried out in triplicates.

TFC of various fractions were estimated by AlCl3 reagent using colorimetric method with minor modification[27,30] and it was determined using calibration curve of standard rutin. The solution of standard were prepared in 80 % CH3OH and further diluted to 10 to 100 μg/ml. Then 0.5 ml of above concentrations was separately mixed with 1.5 ml of 95 % CH3OH, 0.1 ml of 10 % AlCl3 and 0.1 ml of 1 M potassium acetate and 2.8 ml distilled water. All mixtures were kept for incubation at room temperature for 30 min and absorbance was measured at 415 nm.

DPPH radical scavenging activity: Free radical scavenging assay method previously described by Murade et al.[27] and Kebede et al.[29] with some modifications. Briefly, stock solution of various fractions were prepared by dissolving the fractions in Dimethyl Sulfoxide (DMSO) and further sample concentrations of 0.812, 1.625, 3.125, 6.25, 12.50, 25,50 and 100 μg ml-1 were prepared in CH3OH. A sample solution (2 ml) was mixed with 3.0 ml of 0.004 % freshly prepared DPPH, CH3OH solution. The reaction mixture was shaken and kept in dark at room temperature for 30 min. After that, the absorbance of the color-complex was measured immediately at 517 nm. Ascorbic Acid (AA) was used as positive control. The DPPH radical scavenging activity was calculated using the following formula:

TAC of different fraction was determined by previously reported phosphomolybdate method[32]. In this assay, to the 0.3 ml ascorbic acid solution and different concentrations of fractions (10-800 μg/ml), 3 ml reagent solution (0.6 M Sulfuric acid (H2SO4), 28 mM sodium phosphate, 4 mM ammonium molybdate) was added and kept it for incubation. Then optical density was measured at 695 nm. AA was used as positive control.

All protocols were carried out in triplicate and results are reported as mean±Standard Deviation (SD). Data was analyzed with one-way analysis of variance.

Note: a: The phytoconstituents were identified by comparing their RT and mass spectra with those of NIST MS SEARCH 02 mass spectral library and published data 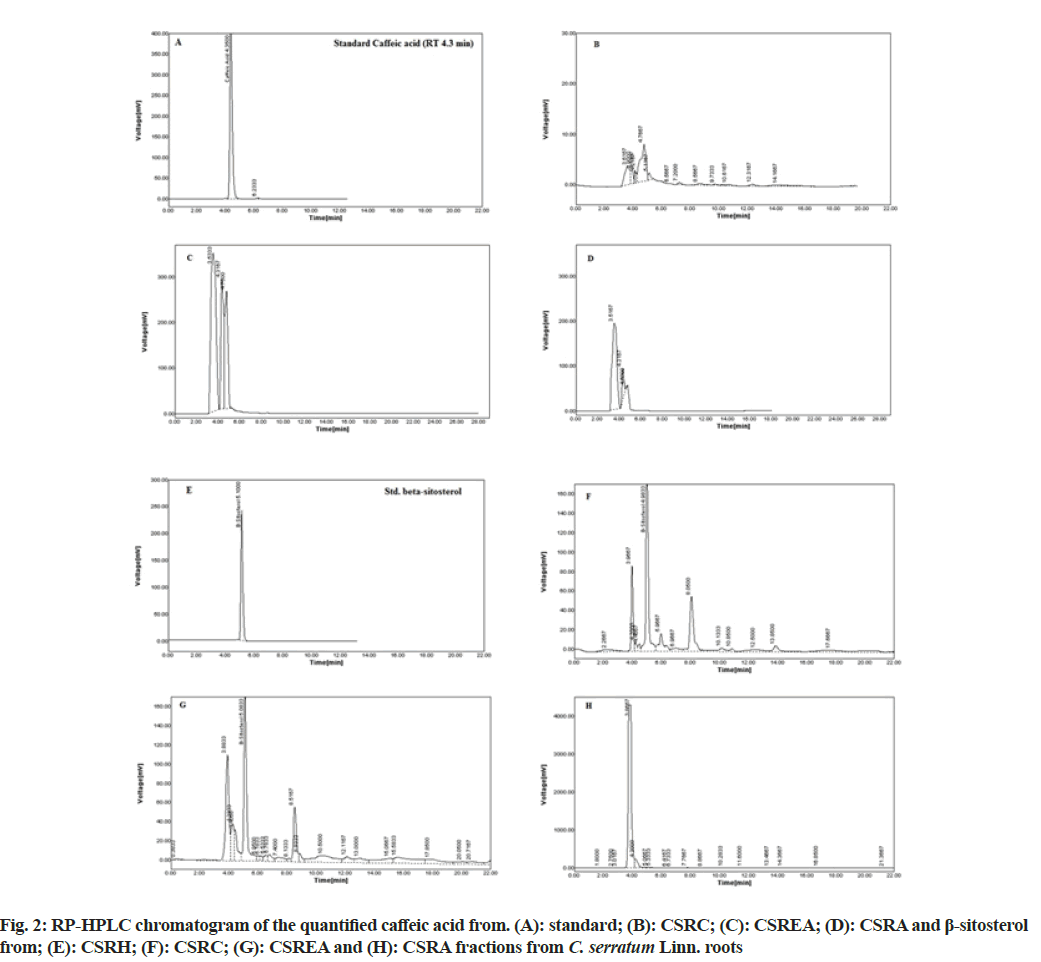 GC-MS and HPLC study and fingerprinting of various medicinal plants and natural products are of huge importance to find potent bioactive compounds[33]. In the present study, for the first time we have quantified, the two potent phytoconstituents, caffeic acid and β-sitosterol from four different fractions of C. serratum by RP-HPLC. The GC-MS analysis of CSRH, CSRC, CSREA, CSRA fractions showed the presence of many potent phytoconstituents and it correlates with higher phenolic and flavonoid content as well as significant antioxidant activity. The plant phenolic compounds and flavonoids have been reported to show potent antioxidant activity in living systems, acting as oxygen radical and free radicals scavengers[34,35].

Present investigation revealed that relatively highest TPC are found in CHCl3 and hydro alcoholic residual fractions and highest flavonoid content are found in ethyl acetate and hydro-alcoholic residual fractions, while absent in n-hexane fractions. It may due to the greater solubility of phenols and flavonoids in ethyl acetate, ethanol-water and CHCl3 solvents suggesting strong antioxidant property.

In order to evaluate the oxidative inhibition and the radical scavenging ability of natural products, the DPPH assay has provided information on a great deal of plants and is commonly used. In DPPH assay among all fractions, CSREA and CSRA showed the lowest IC50 value with greatest antioxidant activity due to presence of high amount of antioxidants in these fractions. High amount of antioxidants shows more DPPH reduction and hence highest scavenging ability. To found a potential relationship between TPC, TFC and antioxidant activity of fractions, the correlation coefficient between these three parameters was evaluated and considerable and moderate correlation was found between DPPH scavenging ability and TPC (r2=0.9917) and TFC (r2=0.9976) content. In this investigation, among all fractions tested, CHCl3, ethyl acetate and residual aqueous fraction showed significantly higher percent inhibition and considerably correlated with TPC and moderately with TFC.

The FRAP assay is based on reducing power of Fe3+ and it shows color change to Prussian blue which depends on amount of antioxidants present in the test solution. The results are in accordance with previous studies, increased absorbance at 700 nm indicated better reducing ability of the fractions, which is associated with its potential antioxidant activity[36,37]. Generally plant phenols are responsible for their pharmacological properties as they are evident in the CSRC, CSREA and CSRA. In the present investigation, ethyl acetate and residual aqueous fraction showed significantly higher reducing ability of Fe3+ to Fe2+ among all fractions tested. Also, the present study showed prominent total antioxidant activity for CHCl3, ethyl acetate and residual aqueous fraction.

For the first time in this study, the flavonoid content and antioxidant capabilities of fractions of ethanol extract of C. serratum Linn. roots are reported. Residual aqueous fraction and ethyl acetate fraction of C. serratum Linn. have been found to contain phenolic and flavonoid compounds and displayed strong antioxidant activity. These effects need to be verified using preclinical animal models. These findings are in agreement with the ethno pharmacological use of this plant in treatment of stress and inflammatory disorders.

The authors declared no conflict of interest