Role of Ethanolic Extract of Microdus brasiliensis (Duby) Ther. in Protecting Survival Rate in Sepsis: An In vivo Study

This is an open access article distributed under the terms of the Creative Commons Attribution-Non Commercial-ShareAlike 3.0 License, which allows others to remix, tweak, and build upon the work non-commercially, as long as the author is credited and the new creations are licensed under the identical term.

Sepsis is one of the major causes of death in intensive care units and no decisive medical treatment is available against sepsis. Globally, it is the major cause of death from infection in intensive care units[1]. It is a lethal clinical syndrome that results from the dysregulated systemic inflammatory response of the body due to the invasion of pathogens[2]. The complications of sepsis are varied and involve coagulation disorders, immune suppression, organ dysfunction and systemic inflammation[3,4].

Severe sepsis affects the cardiovascular system that causes cardiomyopathy and endothelial dysfunction, which results from adverse effects of substances secreted from pathogens and host cells[5]. Also, sepsis impairs neutrophil migration and its antimicrobial activity. Inadequate migration of neutrophils into the site of infection causes the systemic spread of pathogens, which results in high rates of mortality. The initial management of infection in sepsis requires initiating appropriate and timely antibiotic therapy[6]. However, there is no specific therapy or drug against sepsis. Hence, searching to find a new medication for the management of sepsis is necessary. Many of the available medicines are derived from herbs and medicinal plants have long been used to treat various disorders.

Microdus genus (Dicranaceae family) is a moss with around 92 species all over the world and well recorded in the flora of Vietnam, India, Thailand, Canada and China[7,8]. In traditional medicine, Microdus species has wide applications in the treatment of microbial infections[9]. To date, no proper phytochemical and biological investigations have attempted on Microdus brasiliensis (Mb). So, the current investigation mainly aimed to evaluate the phytochemical analysis, total flavonoid content, total phenolic content and antibacterial activity of whole moss Mb extract and also its protective effects on hemodynamic parameters, myeloperoxidase (MPO) activity as well as survival rate were evaluated in cecal ligation and puncture (CLP) induced sepsis in mice.

The whole moss of Microdus brasiliensis (Duby) Thér. was collected from Son Tra Mountains, Danang, Vietnam in 2020 and a voucher specimen (DTU/DB/2020/Moss/1204) has deposited at Department of Botany, Duy Tan University, Danang, Vietnam.

The whole moss wasdried and powdered (200 g) and extracted three times with ethanol (96 %) at 25°. All combined and evaporated under low pressure to obtain an ethanolic extract of Mb (2.0 g), which was preserved in an amber color bottle at 4°[10].

Preliminary phytochemical analysis upon Mb was performed according to the standard practical methods[11,12].

The total flavonoid content of the Mb was determined by using aluminum chloride (AlCl3) spectrophotometric method[13], in which AlCl3 forms complex with hydroxyl groups of flavonoids that exist in the testing sample. To the Mb (1 mg/ml) or standard quercetin solution (3.125, 6.25, 12.5, 25, 50, 100 µg/ml) added 3 ml of methanol, 1 ml of 2 % AlCl3 solution, 200 µl of 1 M potassium acetate and made up to 10 ml with distilled water and incubated for 60 min at room temperature. In contrast, the blank contains only reagents and the absorbance was noted at 415 nm. Based on the measured absorbance of the test sample, the total flavonoid content was read on the calibration line and the total flavonoid content was expressed in terms of quercetin equivalent (mg of quercetin/g of extract).

The total phenolic content of Mb was established through the Folin-Ciocalteu reagent[14]. Initially, five hundred microliters of Mb were mixed with 5 ml of Folin-Ciocalteu reagent 10 % (v/v) in distilled water, diluted and 4 ml of sodium bicarbonate solution (1 M) was added. After 15 min of incubation time for the mixture at room temperature, the absorbance of the produced blue color was read by spectrophotometer. Ultimately, the total phenolic content of Mb was calculated from the calibration curve of gallic acid and expressed as gallic acid equivalent, respectively[15].

In vitro antimicrobial activity of Mb was performed by the cup-plate method[16]. The test bacteria used in this study were two gram-positive bacteria: Staphylococcus aureus (ATCC25923) and Bacillus subtilis (ATCC21332) and two gram-negative bacteria: (ATCC1408) and Escherichia coli (ATCC25922). Mueller Hinton agar plates inoculated with 0.5 McFarland standards of mentioned bacteria were used for this assessment. Test strains were inoculated by spread plate technique and wells were made by sterile cork borer. Accurately 50 µl (100 µg/ml concentration) of Mb and standard, streptomycin was poured in each well. After 24 h incubation at 37°, inhibition zones were measured by a calibrated scale[17].

Mice were randomly divided into 4 groups (6 mice in each group). The organisation for economic co-operation and development (OECD) main test 425 (up and down dose procedure) was utilized using doses of 175, 550, 1750 and 2000 mg/kg body weight (b.w) of Mb. The test animals have undergone fasting overnight before administering the extract using oral gavage. The first set of test animals was administered with a dose of 175 mg/kg b.w. When the animal survived after 48 h, the dose that was given to the next sets of rodents was increased by a factor 3.2, which was 550 mg/kg b.w. After 48 h of survival, the next test animal was given 1750 mg/kg b.w then the same cycle is repeated and the upper bound dose of 2000 mg/kg b.w was given to the test rodents. The testing was ended until the last three animals survived the upper bound dose and all of the test animals were observed up to 14 d[19,20].

CLP-induced model[21] was used for the induction of sepsis. At the beginning of the experiment, mice were randomly divided into 4 groups (6 mice in each group). Mice in group 1 (normal control), underwent midline abdominal incision without CLP. Mice in group 2 (CLP-induced), underwent midline abdominal incision with cecal ligation (50 %) and punctured to induce polymicrobial sepsis. Mice in groups 3 and 4 received 100 mg/kg b.w (as a low dose) and 200 mg/kg b.w (as a high dose) of Mb intraperitoneal (i.p) at 0, 1, 3, 6 and 24 h after CLP-induced operation. Blood samples were obtained from the portal vein. 0.5 ml of blood samples were transferred into laboratory tubes containing pre-autoclaved nutrient broth medium (Sigma-Aldrich, Germany) and put in an incubator at 37°. The remaining blood samples were decanted gently into collection plastic tubes and then centrifuged at 3000 rpm for 5 min. Then serum was obtained, aliquoted into microtubes and stored at -20° for biochemical analysis.

Later, mice were anesthetized by i.p injection of ketamine (60 mg/kg b.w) and xylazine (10 mg/kg b.w). Then, the abdominal region of animals was shaved and sterilized by betadine. The cecum was exposed through a midline abdominal incision and ligated (50 %) with 3/0 silk suture then punctured with a sterile 18 gauge needle. The cecum was gently squeezed and after a drop of cecal contents was discharged, the cecum was repositioned into the abdominal cavity. The abdominal wall and skin were closed with 3/0 silk suture. After the surgery, mice received 3 ml warm 0.9 % normal saline subcutaneously(s.c) for fluid resuscitation. After mice recovered from anesthesia, they had free access to food and water.

In addition to monitoring the animals for 3 d, animals survival rate was reported after 72 h [22].

The activity of MPO[23] was assessed as previously described with minor modifications. Briefly, 1 ml of the serum was mixed with 1 mg of hexadecyltrimethylammonium bromide (HTAB). Then sonicated for 5 min and centrifuged at 3000 rpm for 10 min at 4°. 0.1 ml of supernatant was mixed with 2.9 ml of 50 mM phosphate buffer (pH 6.0), containing 0.167 mg/ml O-Dianisidine dihydrochloride and 1 % hydrogen peroxide. Then the mixture was incubated for 5 min at room temperature. After adding 0.1 ml of 1.2 M hydrogen chloride (HCl) the change in absorbance was measured at 460 nm using a spectrophotometer.

Phytochemical analysis, results of the preliminary phytochemical screening of Mb possesses alkaloids, terpenoids, flavonoids, phenolics, saponins and tannins, among the tested class of compounds. Besides, coumarins, phenanthrenes, anthraquinones, bibenzyls, fluorenones and cardiac glycosides were found to be absent in the extract.

The results of in vitro antimicrobial activity of Mb revealed that it has antibacterial activity against both gram-positive bacteria (S. aureus and B. subtilis) and gram-negative bacteria (S. typhi and E. coli). As can be seen in Table 1, Mb was as potent as standard streptomycin against S. aureus, S. typhi and E. coli and showed the same zone of inhibitory effect, while on B. subtilis has a significant zone of inhibition, compared to streptomycin.

Optical density (OD) of blood at 600 nm is shown in fig. 1 where the OD of blood significantly (p<0.01) increased in the CLP-induced group compared with the normal control group. On the other hand, the administration of Mb (at both doses) to the septic mice significantly (p<0.05) decreased OD in the blood of animals compared with the CLP-induced group. 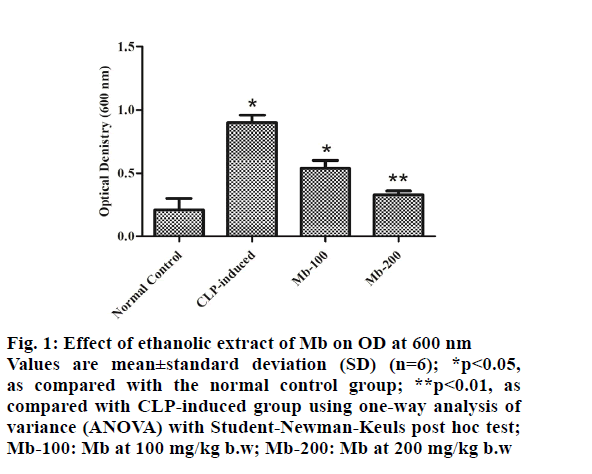 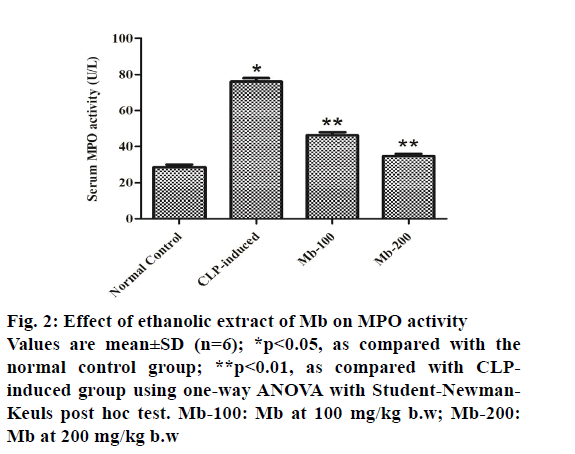 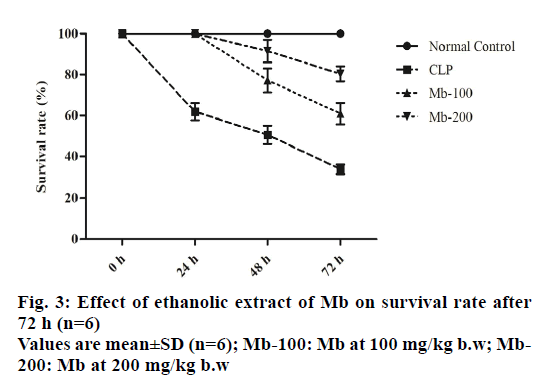 As mentioned, sepsis causes cardiac and endothelial dysfunction[5,25]. The hemodynamic monitoring in this study showed attenuation of hemodynamic parameters in the CLP-induced group. This event can lead to misbalancing in tissues oxygen supply/demand and accelerates the process of septic shock. For this reason, apart from antibiotic therapy, hemodynamic stability is essential in the management of sepsis[6]. Administration of Mb (at both doses) to the septic mice significantly (p<0.05) decreased OD in the blood of animals compared with the CLP-induced group (fig. 1). Administration of Mb to septic mice increased mean arterial and blood pressure, compared to CLP-induced group (Table 2). Therefore, the administration of medications extracted from Mb might be useful for the treatment of sepsis.

Table 2: Effects of Ethanolic Extract of Microdus Brasiliensis on Hemodynamic Parameters in Clp-Induced Sepsis After 72 H

MPO, the major enzyme in azurophilic granules of neutrophils, is a marker of inflammation initiation in plasma. Thus, increased MPO activity indicates the onset of the inflammatory response and neutrophil infiltration due to the induction of microbial sepsis[23]. Our results showed that MPO activity increased in the serum of animals with CLP -induced poly-microbial sepsis in comparison to normal animals. Administration of Mb decreased MPO activity, which shows the control of the pro-inflammatory effect of Mb when compared to CLP-induced group (fig. 2). Evidence related to the pro-inflammatory activities of Mb is poor. Also, the present study demonstrated a reduction in survival rate in CLP-induced sepsis in mice (fig. 3). The reason for high mortality rates in sepsis is the excessive release of cytokines, which results in a hyper inflammatory state.

To conclude, the result of the present study is the first report of moss Mb, as a double edge sword in the treatment of CLP-induced sepsis in mice. The key phytochemicals responsible for this activity claimed to be alkaloids, flavonoids, polyphenols, saponins and tannins. The results provide evidence that supports the traditional uses of Mb. Also, these findings suggest that moss Mb can take an account as a good natural source of remedial medicine for sepsis. Hence, the results of the current study remain useful for further research to identify the potential bioactive molecules from Mb.