Role of Glutamate in the Development of Depression in Asthma: A Preliminary Study

The present investigation was carried out to find the role of glutamate in development of depression in asthma using mice. Female albino mice were divided into five groups, group I- normal control, group II- depression, group III- asthma, group IV- asthma+depression and group V- memantine-treated asthma+depression. Various respiratory parameters, histopathology of lungs, forced swim test, sucrose preference test and brain neurotransmitter levels were measured. A significant decrease in tidal volume and air flow rate as well as increase in respiratory rate was found in depression asthmatic group as compared to only asthmatic group, only depression group and normal control group. These same animals when subjected to despair swim test and sucrose preference test, the immobility time was significantly increased whereas preference to the sucrose solution was significantly decreased. Glutamate, 5-HT and norepinephrine levels were significantly increased and dopamine level significantly decreased in depression group and depression along with asthma group as compared to normal control group or asthma group. Treatment with memantine showed improvement in the respiratory parameters and depression parameters as compared to untreated asthmatic mice with depression. Moreover, a positive correlation was observed between airflow rate and immobility. Also, a direct correlation was observed between brain glutamate level and airflow rate as well as brain glutamate level and immobility. These results suggested that glutamate might be the key mediator involved in development of depression in asthma.

Asthma and major depressive disorder (MDD) are global health problem as considered by World Health Organization. The prevalence of MDD is higher in asthmatics than in the general population [1,2]. The presence of atopic illness in childhood is associated with an increased risk of MDD later in life [3]. MDD occurs at high rates in people with more difficult-totreat asthma compared with those with mild or wellcontrolled illness. Moreover, MDD is associated with poor asthma control [4,5]. Asthma and MDD share several pathophysiological pathways relevant to both disorders. Both are complex chronic illnesses that result from interacting genetic and environmental factors and may share common susceptibility genes [6]. In the last decade, the impact of coexisting asthma and depression has become the focus of considerable research interest. However, the findings so far have been confusing and often contradictory [1,7,8].

The amino acids glutamate and aspartate, abundantly present in the mammalian central nervous system (CNS), are major excitatory neurotransmitters and play important physiological role via glutamate receptors [9]. But excessive glutamate action, especially extrasynaptic glutamate, may be deleterious for neuronal function and contribute to depression. Patients with depression, both during an acute episode and during remission, have elevated levels of glutamate in some brain regions [10]. In the respiratory system, the nucleus tractussolitarii (nTS) in the brainstem plays an important role in the regulation of respiration. During normal respiration, activation of mechanoreceptors and vagal motor neurons transmit impulses in to the CNS, which causes the release of glutamate from nTS. Glutamate transmits excitatory input to the vagal and parasympathetic neurons and produce rhythmic pattern of bronchoconstriction and dilation. Previous studies have demonstrated that the antagonism of glutamatergic receptors in the nTS leads to important changes in respiratory baseline parameters [11,12], revealing involvement of glutamate in regulation of respiratory and sympathetic activities.

Hence, maintaining the optimal balance of this major neurotransmitter in the CNS may thus be critically important. However, to our knowledge, the possibility of a sequential cascade starting from an increased respiratory rate and rhythm, resulting in disturbed cerebral glutamate homeostasis and the eventual depression, has not yet been studied in asthma. Therefore, present investigation was carried out to find out role of glutamate in development of depressive status in asthma using mice.

Healthy female albino mice, weighing 20-40 g, were used in the present study. The animals were acclimated in a standard light (12:12 h light and dark cycle), temperature (25 ± 2°) and humidity (55 ± 5 % relative humidity), in poly propylene cages with free access to food and water ad libitum during the course of experiment, except the group II animals, which were subjected to 22:02 h light/dark interval for 14 d for the inducing depression and was served as depression control. The protocol (KBIPER/2011/246) was approved by Institutional (K. B. Institute of Pharmaceutical Education and Research) Animal Ethics Committee (IAEC) under the Committee for the Purpose of Control and Supervision of Experiments on Animals (CPCSEA) before carrying out the project.

The animals were divided into five groups containing six animals in each group (Table 1). Group I mice did not receive any treatment except saline and served as normal control. Group II mice were served as depression group and were subjected to 22:02 h light/ dark interval for 14 d to induce depression [13]. Group III, IV and V mice were exposed to aerosol of trypsin (1 mg/ml, 1 ml/min) once daily for 5 min, followed by a rest of 2 h and then exposed to egg albumin (1 %, m/V solution, 1 ml/min). This procedure was repeated for 10 d and later, egg albumin aerosol was discontinued whereas trypsin exposure was continued for the 21 d [14]. Group III mice were exposed to only egg albumin on d 26 and 27 (2 challenge) and were subjected for measurement of following parameters on d 27 after 3 h of egg albumin exposure. They served as asthmatic control group. Group IV and V mice were additionally challenged by egg albumin on d 33, 34, 40, 41, 47 and 48 (total 8 challenge) to induce depression in asthma and following parameters were measured on 48th d after 3 h of egg albumin exposure. Group V mice received memantine (3 mg/kg, i.p.), an NMDA receptor antagonist, from d 28 to 48. All the animals were subjected to measure asthmatic parameters such as respiratory parameters and histopathology of lungs, and depression parameters that included forced swim test and sucrose preference test and brain neurotransmitter level.

Table 1: Time Schedule for Induction of Asthma and Depression in Mice

The histopathological slides were prepared in pathological laboratory by standard procedure. Briefly, the animals were sacrificed and their lungs were dissected out. The tissues were fixed with formalin, embedded in paraffin blocks, sectioned with microtome (0.7 μ thicknesses) and finally stained by hematoxylin and eosin stain technique [17]. Interpretation was done by a histopathologist who was blind about the groups of animals.

Mice were placed in a glass cylinder (12 cm height, 25 cm diameter) filled with water (25 ± 1°) to a depth of 15 cm. Each mouse was allowed to adjust to the new conditions for initial 2 min since each mouse showed vigorous movement during this initial 2 min period of the test. The duration of immobility was manually recorded during the next 4 min of the total 6 min testing period. Immobility time is the time during which the animal floated on the surface with front paws together and made only those movements, which were necessary to keep afloat [18].

The sucrose preference test was carried out at the beginning and the end of the experiment. The sucrose preference test indicates the state of anhedonia, a behavioural measuring of depressive-like phenotype in mice [19]. The procedure composed of training and testing courses. In the training course, mice were trained to experience and drink a sucrose solution (1 % m/V) for 24 h, by presenting them simultaneously with two identical bottles: one containing a sucrose solution and the other containing tap water. In the testing course, mice were given, for 15 h, a free choice between two bottles, with sucrose solution or tap water. To prevent possible effects of preference to one side in drinking behaviour, the position of the bottles in the cage was switched in the mid-point of testing. No previous food or water deprivation was applied before the test. Sucrose preference was calculated as a percent of the volume of sucrose intake over the total volume of fluid intake. Sucrose preference (%) = sucrose intake×100/ sucrose intake+water intake.

After sacrificing the mouse, the brain was removed and homogenized in 5 ml HCl-butanol for about 1 min. The sample was then centrifuged for 35 min at 3500 rpm. An aliquot supernatant phase was removed and added to centrifuge tube containing 2.5 ml heptane and 0.31 ml, HCl (0.1 M). After 10 min of vigorous shaking, the tube was centrifuged under the same conditions as above in order to separate the two phases, and the overlaying organic phase was discarded. The aqueous phase was then taken for the measurement of neurotransmitter level.

To 0.2 ml aqueous phase, 0.25 ml of O-pthalaldehyde reagent was added. The fluorophore was developed by heating to 100° for 10 min. After the samples reached equilibrium with the ambient temperature, readings were taken at 515 nm for glutamate and 360-470 nm for 5-HT in the spectrofluorimeter (RF5301, Shimadzu, Japan).

All data were expressed as mean ± SEM. The data were analysed by one-way ANOVA followed by Tukey's multiple range test to detect the difference between the groups. A value of p<0.05 was considered to indicate statistical significance. Simple linear regression was applied to check the correlation between asthma and depression.

Since glutamate is important for regulation of respiration and also plays important role in depression [20,21], the present work was aimed to study the link between these two diseases by studying their effects on brain neurotransmitter levels with specific interest on brain glutamate level. Behavioural immobility reflected a state of despair in the animal and is a valuable parameter to assess a depressive state. Sucrose preference test evaluated anhedonia, a core symptom of depression [22]. It was observed that when the number of exposures of trypsin and egg albumin was increased, the declining of respiratory functions became severe. These animals when subjected to despair swim test and sucrose preference test, the immobility time was significantly increased whereas preference to the sucrose solution was significantly decreased. This suggested that increased severity of asthma generated a state of depression. Memantine-treated mice showed no significant change in despair swim test and sucrose preference test as compared with depressive animals (Table 3).

Table 3: Effect of Asthma and Depression on Immobility Time and Preference to the Sucrose Solution

It is a well-known fact that changes in norepinephrine, serotonin and dopamine as well as glutamate dysfunction contributed to the pathophysiology of depression [23,24]. There was a significant increase in glutamate, 5-HT and NE level and decrease in dopamine level in the depression group and depression along with asthma group as compared to control group or asthma group. There was no significant difference was found between memantine-treated animals and normal control animals. Thus, treatment with memantine might reverse the elevation in neurotransmitter level (Table 4).

Table 4: Effect of Asthma and Depression on Brain Neurotransmitter Level 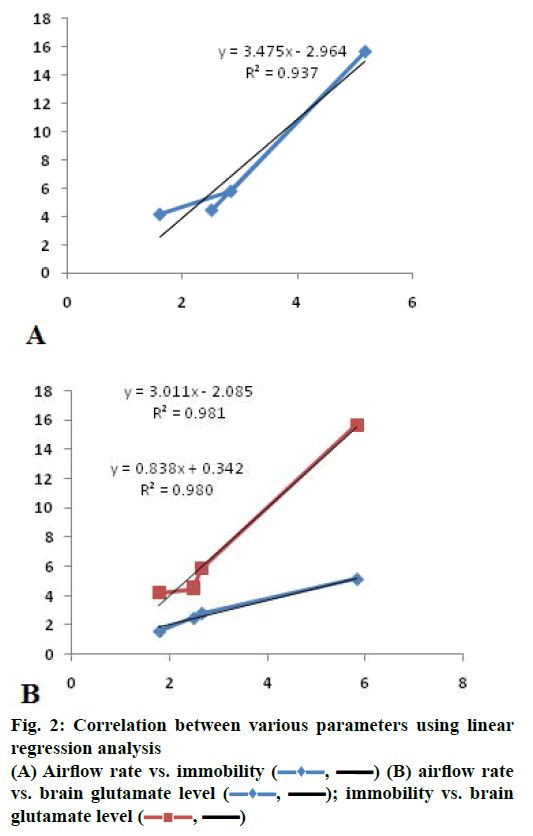 In asthmatic condition, stimulation of rapidly adapting receptor caused rapid release of glutamate from nerve terminals and transmitted excitatory input to the airway parasympathetic preganglionic fibres that lead to acetylcholine and substance P release [25]. These mediators caused bronchoconstriction, which would further lead to decrease in tidal volume and air flow rate and simultaneously increase the respiratory rate, which is consistent with our observations. Peripheral inflammation leads to microglia activation, which could interfere with excitatory amino acid metabolism leading to inappropriate glutamate receptor activation. Thus higher levels of glutamate observed in mice suffering from severe asthma and simultaneous development of depression.

To the best of our knowledge, this is the first report showing positive link between asthma and depression in experimental mice. Although the causal direction of these associations is unclear, glutamate might be the key mediator contributing to the pathogenesis of depression in asthma. Further investigation at molecular level is needed to find out a pathophysiological link between these two diseases.