High-performance liquid chromatographic and UV spectrophotometric methods were developed and validated for the quantitative determination of pirfenidone, a novel antifibrotic agent used in idiopathic pulmonary fibrosis. Chromatography was carried out by isocratic technique on a reversed-phase C 18 Zorbax Eclipse plus column with mobile phase consisting of acetonitrile:water (35:65 %v/v) at flow rate of 0.7 ml/min. The UV spectrophotometric determinations were performed at 317 nm using methanol as a solvent. The proposed methods were validated according to International Conference on Harmonization ICH Q2 (R1) guidelines. The linearity range for pirfenidone was 0.2-5.0 and 3-25 µg/ml for HPLC and UV method, respectively. Both the methods were accurate and precise with recoveries in the range of 98 and 102 % and relative standard deviation <2 %. The developed methods were successfully applied for determination of pirfenidone in tablets.

Pirfenidone is a novel antifibrotic agent approved for mild to moderate Idiopathic pulmonary fibrosis (IPF) as orphan drug in Japan and Europe [1,2]. IPF is a rare incurable disease, often fatal; which mostly affects geriatric patients causing fibrosing interstitial pneumonia of unknown etiology [3]. Pirfenidone is the only drug which has been approved for the treatment of IPF. Pirfenidone is a small non-peptide molecule of low molecular weight (185.2 daltons) with the chemical name of 5-methyl-1-phenyl-2-(1H)-pyridone (fig. 1). 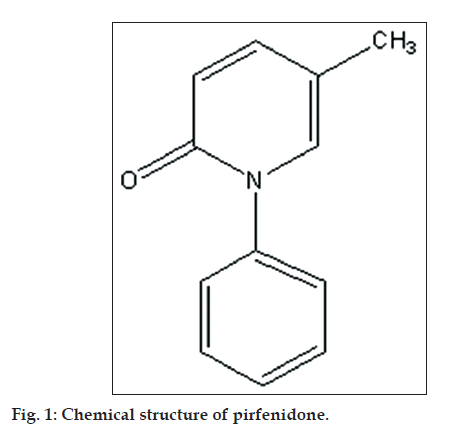 Twenty tablets/capsules containing pirfenidone were accurately weighed. Tablets were finely powdered. Capsules were emptied and mixed homogenously. Accurately weighed amount of powder equivalent to 100 mg of pirfenidone was transferred to 100 ml volumetric flask and 50 ml of methanol was added. The mixture was sonicated for 30 min, diluted to mark with methanol and filtered through Whatman filter paper no. 41. From the stock solution, 1.0 ml was accurately transferred to 100 ml volumetric flask and diluted with mobile phase to obtain an intermediate solution of 10 μg/ml of pirfenidone. Aliquot of 1.0 ml of this solution was accurately diluted 10 ml with diluent to obtain the final sample solution containing 1.0 μg/ml of pirfenidone. This was filtered through 0.45 μm Nylon filter, degassed by sonication and volume of 20 μl was injected in chromatographic system. Sample solution was injected in developed HPLC system and area of the peak was measured and % assay was calculated.

The proposed methods were validated according to International Conference on Harmonization ICH Q2 (R1) guidelines [8]. The optimized HPLC conditions for assay of pirfenidone was isocratic mode acetonitrile-water (65:35%v/v) at flow rate 0.7 ml/min in a total run time of four minutes and was used to check the system suitability study. Fig. 2(a) shows the corresponding chromatogram of standard pirfenidone in optimized HPLC conditions showing retention time for pirfenidone at 2.02 min. The system suitability and validation parameters for determination of pirfenidone by HPLC method are depicted in Table 1.

*Each value is mean±deviation of three determinations

Table 3: Validation Parameters For Determination Of Pirfenidone By UV Method

The formulation powder was sonicated with methanol for 30 min to ensure complete dissolution of pirfenidone. The developed HPLC and UV spectrophotometric methods were applied to determine content of pirfenidone in marketed tablet formulation and the capsule formulation prepared in our laboratory. The amount of pirfenidone was calculated using the respective regression equation obtained from calibration graphs of HPLC and UV methods. Results of analysis of pharmaceutical formulations containing pirfenidone are shown in Table 4. The proposed analytical methods were compared using statistical analysis. The Student’s t-test was applied and does not reveal significant difference between the experimental values obtained in the sample analysis by the two methods. The calculated t-value (tcalc=1.102) was found to be less than the critical t-value (tcrit=2.228) at 5 % significance level.