A simple, efficient and reproducible method for the simultaneous determination of gatifloxacin and ornidazole from tablets has been developed using reversed phase high performance liquid chromatography. The separation was done using a mobile phase consisting of acetonitrile: methanol: water (50:37.5:12.5). Column used was Hypersil C18 (250×4 mm i.d.) 5 m with a flow rate of 1 ml/min with detection at 280 nm. The external standard calibration method was employed for quantification. An elution order of gatifloxacin was 2.58 min and ornidazole was 5.54 min. The linear dynamic range was 20-100 mg/ml and 50-250 mg/ml for gatifloxacin and ornidazole, respectively. Analytical parameters were calculated and a full statistical evaluation included.

Gatifloxacin is chemically 1-cyclopropyl-1,4-dihydro-6- fluoro-8-methoxy-7-(3-methyl - 1-piperazenyl)-4-oxo-3- quinoline carboxylic acid. Ornidazole is chemically α- (chloromethyl)-2-methyl-5-nitro-1H-imidazole-1-ethanol-1-(3- chloro-2-hydroxy propyl)-2-methyl-5-nitroimidazole. Tablets containing 200 mg of gatifloxacin and 500 mg of ornidazole are available in the market as a combined dosage form. Literature survey revealed that the methods like HPLC [1,2] non-aqueous [3], HPTLC [4] and spectrophotometry [5] were reported for the estimation of gatifloxacin in single dosage form and in combination with other drugs. HPLC [6], spectroscopy [7] and polarography [8] methods were reported for the estimation of ornidazole alone and in combination with other drugs. Hence the present method aims to develop an isocratic RP-HPLC method for the simultaneous determination of both drugs in combined tablet dosage forms.

The instrument used was a Shimadzu HPLC SPD10-AVP chromatograph equipped with fixed wavelength UV detector and model 7725i Rheodyne injector with 20 μl external loop. Column used was Hypersil keystone C18 (250 × 4 mm i.d.) 5 μ, operating at room temperature. The elution was carried out isocratically at the flow rate of 1 ml/min using acetonitrile:methanol:water (50:37.5:12.5) as the mobile phase. The detector was set at 280 nm. Response of peak areas recorded and integrated using software. Gatifloxacin working standard (WS) and ornidazole WS were obtained from AtoZ Pharmaceuticals, Chennai with certificate of analysis. HPLC grade acetonitrile, methanol and water were procured from Qualigens India Ltd.

Standard stock solutions of the drugs were prepared by dissolving about 20 mg of gatifloxacin WS and 50 mg of ornidazole WS in 50 ml of mobile phase consisting of acetonitrile:methanol:water in the ratio of 50:37.5:12.5% v/ v. The mobile phase was filtered through 0.45 μ membrane filter and degassed before using.

The external standard calibration method was employed for quantification. The response factor (RF) or sensitivity factor was calculated for both the drugs and used for the analysis of formulation. Twenty tablets were weighed and powdered. A quantity equivalent to 20 mg of gatifloxacin was weighed and extracted with methanol for 3 times and made up to 50 ml with the same. 1.5 ml of the filtrate was diluted to 10 ml with mobile phase.

The test solution (20 μ1) was injected and the chromatogram was recorded. From the peak area obtained, concentrations of both the drugs were calculated using their respective slope and intercept values from the calibration data. The mean content obtained from five observations was 201.05 mg against 200 mg for gatifloxacin and 500.51 mg against 500 mg for ornidazole. The results are shown in Table 1. The retention time for gatifloxacin was 2.58 min and ornidazole was at 5.54 min. The chromatogram is shown in fig. 1. The system suitability parameters were calculated. There are no interference due to commonly used excipients like starch, microcrystalline cellulose, talc, lactose and HPMC. Recovery studies were carried out from a series of spiked concentrations added to the preanalysed dosage forms. 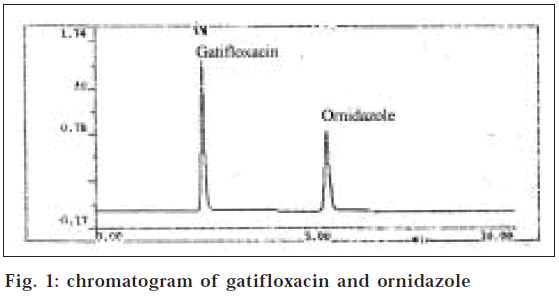 Fig. 1: chromatogram of gatifloxacin and ornidazole

The results obtained indicate that the method is precise and reproducible for the simultaneous estimation of gatifloxacin and ornidazole in tablet formulations. Reproducibility [9] of the method was checked by injecting six samples of test solution and the % RSD was found to be 0.0474 and 0.0529 for gatifloxacin and ornidazole, respectively. The robustness of the method was confirmed by varying the concentration of the organic phase and buffer in the mobile phase and flow rate. The method was found to be robust in the conditions specified. The system suitability parameters [10] were calculated to confirm the specificity of the developed method as shown in Table 2. Results of the high percentage recovery and low standard deviation values (Table 3) were satisfactory and confirm the accuracy, precision and reliability of the method. Further, this method eliminates complicated extraction of individual drugs for quantification. Hence the present method is cost effective and faster, can be used for the routine analysis of these drugs from combined dosage forms.