Screening and toxicity analysis of catechin isomers against femA protein

Fem proteins are the essential structural proteins of various gram-positive bacteria. These are of three different types namely FemX (FmhB), FemA and FemB. Only two Fem protein crystallographic structures are available till date, one for FemA in Staphylococcus aureus and another for FemX in Weissella viridescensis. In this study, computational methods are used to evaluate interaction of FemA protein with catechin and epicatechin analogues. The interaction of FemA protein with catechin and epicatechin analogues are confirmed by binding energy and scores given by Autodock Vina and UCSF Dock docking softwares, which is followed by Lipinski filters and toxicity studies using online Lipinski server of SCFBIO and OSIRIS. Catechin gallate has been found as the best ligand for FemA protein in all aspects and it has outperformed all catechin and epicatechin isomers.

Methicillin resistance in Staphylococcus aureus (MRSA) is a major cause of various nosocomial infections in humans, which are responsible for morbidity and morality. Target site of ß-lactam antibiotics predominantly is PBP-2 protein. Production of additional low-affinity PBP-2a or PBP-2’ protein by mecA chromosomal structural gene is responsible for the resistance of S. aureus. Fem genes are the other additional chromosomal genes, which are responsible for methicillin resistance [1]. Fem genes belong to FemXAB family and produces three proteins namely, FemX (fmhB), FemA and FemB. Fem proteins are responsible for sequential building of interpeptide bonds in cell wall of Staphylococcus aureus. FemX (fmhB) forms first glycine-lysine bond [2,3], followed by next two bonds by FemA and last two by FemB protein [4]. This penta-glycine chain is essential for integrity of cell wall of S. aureus. Inhibition of either of these proteins can acts as a target for new drug development against gram-positive bacteria [5].

In the present work, FemA has been considered as a potential target to identify inhibitors for overcoming resistance to ß-lactam antibiotics in S. aureus. FemA is the only fem protein of S. aureus for which x-ray crystallography structure is available (1LRZA) [5]. It is composed of 426 amino acid residues and has a molecular weight of 50.27kDa.

Flavanoids like epicatechin gallate and epigallocatechin gallate, which are constituents of green tea have been reported to change the architecture of the cell wall of S. aureus [6,7]. Moreso, analogs of these compounds viz. cis and trans forms of catechin and epicatechin also exist as naturally occurring flavanoids. Generally the catechin comprise of three aromatic rings. The first two rings are benzene rings with hydroxyl groups while the third is dihydropyran heterocycle with hydroxyl group at carbon 3. As C2 and C3 are chiral, these structure exhibit (fig. 1) stereoisomerism. Scientists have synthesized various analogues by substitution of these hydroxyl groups with other alkyl groups or other chemical moiety. For example by addition of gallate group at C3 catechin gallate, epicatechin gallate, EGCG, has been formed, which are stored in various structure databases like Zinc [8] and Pubchem [9]. Thus in this study, all synthetic and semi-synthetic analogs of catechins have been evaluated as inhibitor to assess their potential to bind with FemA protein. 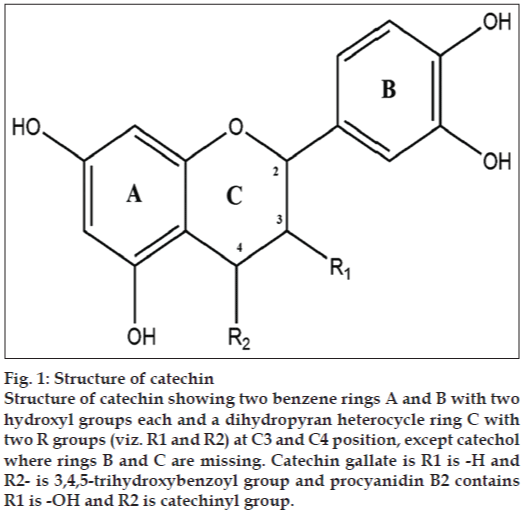 Figure 1: Structure of catechin
Structure of catechin showing two benzene rings A and B with two hydroxyl groups each and a dihydropyran heterocycle ring C with two R groups (viz. R1 and R2) at C3 and C4 position, except catechol where rings B and C are missing. Catechin gallate is R1 is -H and R2- is 3,4,5-trihydroxybenzoyl group and procyanidin B2 contains R1 is -OH and R2 is catechinyl group.

FemA protein having 1lrz PDB id was retrieved from RCSB-Protein data bank (www.rcsb.org). Downloaded 1lrz structure was prepared for docking in mol2 and pdbqt format files by deleting all hetero atoms and water molecules by chimera [10] and MGL [11] tools, respectively. Pdb format file of 1lrz having no hydrogen atom was also prepared by Chimera. This file was used as input for generation of ms format file by DMS tool. Similarly, ms format file was used to generate sph format file by sphgen tool.

Ligand structures were retrieved from Pubchem database. Pubchem database consists of 15 catechin and epicatechin analogues, which are available in chemical form. All these molecules were downloaded in sdf format. Similar to protein all ligands were prepared in mol2, pdbqt and pdb format.

It was carried out by two tools, Autodock Vina and UCSF dock. Autodock Vina [12] uses pdbqt input files both for ligands as well as protein. Center grid coordinates used in this study, for Autodock Vina were 35.829×63.416×94.89 while size used for x, y, z were 76×102×20, respectively. Spacing used in Autodock Vina was 1.000 at different exhaustiveness values. While, in case of UCSF Dock 6.5 [13] mol2 files were used and moreover instead of using user defined center coordinates, different sphere clusters were calculated by sphgen software. Sphgen software used dms software output file, which consists of molecular surface of receptor. Total 78 clusters were calculated, out of these, cluster 1 having 111 spheres with their coordinates was used for generation of grid and box files for 1lrz protein. Docking was performed with all ligand files using grid spacing of 0.3 A°.

Rigid docking was performed by both the softwares. The docking orientations are ranked based on a molecular mechanics-like scoring function known as Dock score in case of UCSF Dock, binding energy in case of Autodock Vina. Protein residues forming hydrogen and hydrophobic interactions with ligand molecule is further calculated by Ligplot+ software [14].

To determine the toxic level of best FemA inhibitors, toxicity studies was performed by online server, OSIRIS property explorer [15] (http://www.organicchemistry.org/prog/peo/) during toxicological analysis various in silico tests were performed to detect the risk of mutagenicity, carcinogenicity, teratogenicity, irritants and reproductive effects. These predictions depend on comparison between precomputed set of structural moieties whose properties are already known with structural moieties of molecules loaded by user on server.

Docking of FemA protein with catechin and epicatechin analogues have exhibited 100% results with Autodock Vina while 50% with UCSF DOCK. Ligands were ranked on the basis of binding energy and grid score given by Autodock Vina and UCSF Dock 6.5, respectively. As shown in Table 1 both docking tools has predicted (-)catechin gallate with cid 6419835 as best inhibitor having best binding affinity of -8.7 kcal/mol with Autodock Vina and best dock score of -45.19 with UCSF Dock among all 15 analogues. Best conformations of best ligands predicted by both the softwares are shown in fig. 2a and b.

As shown in fig. 2c and d according to both the softwares catechin gallate is binding exactly between the active sites in L-shaped channel of first sub-globular domain of FemA protein. Best ligand conformation predicted by both the docking tools were further used to form complex with protein and these were further used with Ligplot+ to calculate hydrogen and hydrophobic interactions with protein residues. As shown in fig. 3a, according to conformation given by Autodock Vina catechin gallate form hydrogen bonds with GLY 330, LYS 383, PHE 363, ASP 150 residues of FemA protein with distance of 3.18, 3.03, 3.03 and 3.09, respectively (shown in green color), while residues like GLY 365, ALA 329, TYR 327, TYR 328, ILE 155, TYR 364, GLN 154, LEU 153, PHE 149 forms hydrophobic interactions. Similarly, UCSF Dock predicted conformation forms hydrogen bond with LYS 383 and GLN 154 with bond distance 3.06, 3.07 and 3.28, respectively, while there are six residues, which forms hydrophobic interactions, residues are GLY 365, ALA 329, TYR 327, TYR 328, PHE 149 and ILE 155 (fig. 3b). Both softwares predicted catechin gallate as most efficient ligand for FemA protein as compared to other catechin and epicatechin derivatives or flavanoids and have shown LYS 383 residue of FemA protein as a common residue, which forms hydrogen bond and all 6 hydrophobic interacting residues, which were predicted by UCSF Dock were also predicted in Autodock Vina result. It appears that LYS 383 is the most essential residue of FemA protein for interaction with catechin gallate. Toxicity analysis was performed by OSIRIS tool. According to OSIRIS if score for any category is 1, then it indicates no risk, if it lies between 0.6-0.8 then the chemical may have medium risk but if score is less than 0.6 it is considered as high risk chemical. As shown in Table 2 all the analogues except catechol (s=0.6), have score equal to one for all four risk categories viz.-mutagenicity, tumorigenicity, irritation and reproductive effects. Similarly as predicted by other two categories of OSIRIS drug likeness and drug score, which determine whether particular molecule is similar to the known drugs, same molecule catechol was discarded due to poor scores and rest all the molecules are non-hazardous as well as similar to good drugs. Therefore, except catechol; rest 14 molecules are safe and can be used as future drugs. In toxicity analysis catechin gallate has passed all the tests, therefore it may be a ray of hope for various health problems caused by gram-positive bacteria.

As shown in Table 3, two molecules have violated two Lipinski rules, while 6 molecules have violated one rule and rest seven have not violated any Lipinski rule. All the violations are shown in red color and summarized in last category under number of Lipinski value (LV). Pyrocyanidin B2 and EGCG have high chances of failure in preclinical and clinical trials, while rest 13 molecules seems to have very less or no chances of failure.

Ligand molecule catechin gallate Pubchem cid 6419835 has been predicted as a potential inhibitor of FemA protein; by two best tools in terms of binding affinity and docking scores and has also shown nontoxic behavior in toxicity tests and also follows Lipinski rule of five. Therefore, if it can be analysed in in vitro studies and chances of failure in preclinical and clinical trials seem to be very less and it can be a ray of hope for the treatment of various S. aureus infections.

We are thankful to UCSF Lab and Scripps Research Institute Lab as well as OSIRIS and SCFBIO web servers for providing these softwares academically free. Special thanks to Ligplot team for providing academic license of this software.