Leukotrienes, derived from the biological metabolism of arachidonic acid, refers to a group of inflammatory mediators [1,2], which could be able to cause a series of inflammations reaction by bonding with leukotriene receptor [3,4]. Recently, following the position confirmed and the understanding of functional mechanism of leukotriene receptor in bronchial hyper responsiveness [5,6], the treatment for asthma with leukotriene receptor antagonist has been a new tendency. Montelukast sodium, Singulair, [1-[[[(1R)- 1-[3-[(E)-2-(7-chloroquinolin-2-yl)-ethenyl]phenyl]- 3-[2-(1-hydroxy- 1-methylethyl)phenyl]-propyl] sulfanyl]methyl]cyclopropyl]acetate, developed by Merck Frosst Canada in the 1990s and used as one of the selective antagonists of leukotriene receptor. It could decrease inflammatory reactions mediated by leukotrienes, lower blood pressure [7-9], and also used to treat asthma [10,11], allergic rhinitis [12] and heart attack [13]. Currently, montelukast sodium is a widely prescribed for the treatment of asthma and symptoms of allergies, because of its prominent efficacy and less adverse reaction [14,15].

Figure 1: The chemical structures of compounds
A. Montelukast sodium; B. S-enantiomer; C. A5 enantiomer and D. A5 R-enantiomer

Although a few analytical methods for determination of montelukast sodium S-enantiomer have been reported, for instance, Redondo et al. [21] developed a test method with an enantioselective proton nuclear magnetic resonance (1H NMR) spectroscopy by adding (-)-cinchonidine into montelukast sodium, but because of a low sensitivity, it was not used for quantitation of S-enantiomer at very low levels (below 0.5%), and the method established by Lida et al. [22] and the method embodied in EP 8.0 all performed on an AGP chiral column with stationary phase of α-acid glycoprotein [23], it is easily destroyed under various severe conditions, such as organic reagent, acidic or alkaline etc. Hence, its life time is too short conventionally. In addition, the capacity factor of chiral-AGP column is smaller. However, in EP 8.0, the injection concentration was 1000 μg/ml，which is more than the maximum concentration of 100 μg/ml, undoubtedly, it may seriously destroy the column. Radhakrishnan et al. [24] developed a chiral high performance liquid chromatography (HPLC) method for determination of montelukast S-enantiomer in montelukast sodium on a chiral pak-IA column with an eluent of n-hexane:ethanol:1,4-dioxane:trifluoroacetic acid (TFA):diethylamine (DEA) (65:25:10:0.3:0.05, v/v/ v/v/v), but its sensitivity was poor with the limit of quantitation (LOQ) of 200 ng, it accounted for 2% of quality of montelukast sodium sample (1000 μg/ml of montelukast sodium and 10 μl injection volume), which does not meet the requirement of montelukast sodium quality criteria in EP 8.0. In addition, as process impurities, the contents of both A5 and A5 R-enantiomer should be strictly limited, however, up to now, there is not a method to be reported for determination of A5 and its enantiomer.

The UV spectrum scan from 190 to 420 nm was carried out on Hitachi U-2910 UV/Vis spectrophotometer for wavelength selection. The concentration of A5 was 10 μg/ml, so that of montelukast sodium. The solvent was n-hexane:isopropanol:ethanol:TFA:DEA (65:15:20:0.1:0.1, v/v/v/v/v). For selecting column, Chiralcel® OJ-H, Chiralpak® AD-H, OD52546 and SCDP52546 chiral columns were chosen to separate montelukast sodium enantiomers and A5 enantiomers by injecting system suitability solution with the mobile phase of n-hexane:isopropanol:ethanol:TFA:DEA (65:15:20:0.1:0.1, v/v/v/v/v) at 0.9 ml/min, individually. Various solvents including n-hexane, isopropanol, ethanol and different additives, such as TFA and DEA, were used in different combinations to get good peak resolutions and lesser run time. Different flow rates from 0.8 to 1.0 ml/min in isocratic mode have been studied to achieve a good peak separation. The column temperature was set at 25°, 30° and 35° for optimizing according to its effects on peak resolutions and retention times of two pairs of enantiomers, respectively.

The limit of detection (LOD) and LOQ for montelukast sodium S-enantiomer, A5 and A5 R-enantiomer were estimated as the amounts for which that the signalto- noise ratios were 3:1 and 10:1, respectively, by injecting a series of diluent solutions of standard store solution of 3 analytes.

By quantitatively diluting the standard store solutions of montelukast sodium S-eantiomer, A5 and A5 R-enantiomer, a series of different concentration solutions ranging from the LOQ to 200% of the permitted maximum level (not more than 0.1% in test sample of 1000 μg/ml), i.e. LOQ, 0.08%, 0.1%, 0.12%, 0.15% and 0.2% for montelukast sodium S-enantiomer, A5 and A5 R-enantiomer were prepared in triplicate to evaluate linearity, respectively. Peak areas and concentrations of the analytes were subjected to regression analysis to calculate the calibration equation and the correlation coefficient (r).

Accuracy was evaluated by determination of recoveries of montelukast sodium S-enantiomer, A5 and A5 R-enantiomer at four levels respectively. Considering the linear interval of the validated method, the tests were performed at the concentrations of spiked LOQ, 80, 100 and 200% of limit level to montelukast sodium sample solution (1000 μg/ml), in six replicates, respectively. The recoveries were calculated using the Eqn. 1, recovery (%) = Mmeasured/Mspiked×100, where, Mmeasured was the weight of spiked compound measured using the developed method, Mspiked was the weight spiked into sample solution.

Method robustness was tested by modifying flow rate from 0.8 to 1.0 ml/min, column temperature from 28 to 32°, additives content from 0.09% to 0.1% and employing columns from different lots. While a factor was investigating, the other chromatographic conditions were held constant. The chromatographic resolution between montelukast sodium and it’s S-enantiomer; between A5 and its R-enantiomer were used to evaluate the method robustness. N-hexane-ethanol-1,4-dioxane-TFA-DEA system was taken as eluent for separation of montelukast sodium enantiomers, that has been reported by Radhakrishnan et al. [24] but, in view of the property of eluent, only the chiral column with bonded stationary phase can be used, that has restricted the use of that with coated stationary phase in determination of montelukast enantiomers. For the reason mentioned above, in this paper, n-hexane, ethanol and isopropanol were screened as candidates for composition of mobile phase, and because of alkalinity of montelukast sodium, a proper amount of DEA or TFA could be added for improvement of stereoselectivity. In conclusion, the experimental results show that selecting n-hexane served as primary solvent, isopropanol is an important factor to facilitate separation of A5 with montelukast sodium S-enantiomer, and TFA is a critical factor for achieving separation of montelukast sodium and it’s S-enantiomer. Furthermore, both ethanol and DEA play an important role in decreasing peak spreading, shortening run time and improving column efficiency. Through optimization of eluent composition, the optimal mobile phase system is n-hexane:isopropanol:ethanol:DEA:TFA system, and the best ratio was 65:15:20:0.1:0.1.

The 3 kinds of flow rates of 0.8, 0.9 and 1.0 ml/min were chosen for optimization of using the proposed method. The results showed the retention time of both montelukast sodium enantiomers and A5 enantiomers all moved toward gradually with the flow rate being faster, and the sample test period was shortened, but the column pressure was increased rapidly. Due to having no significant effect on the separations of 2 pairs of enantiomers, and taking column protection and analytical period into consideration, the flow rate of 0.9 ml/min was selected in this study. 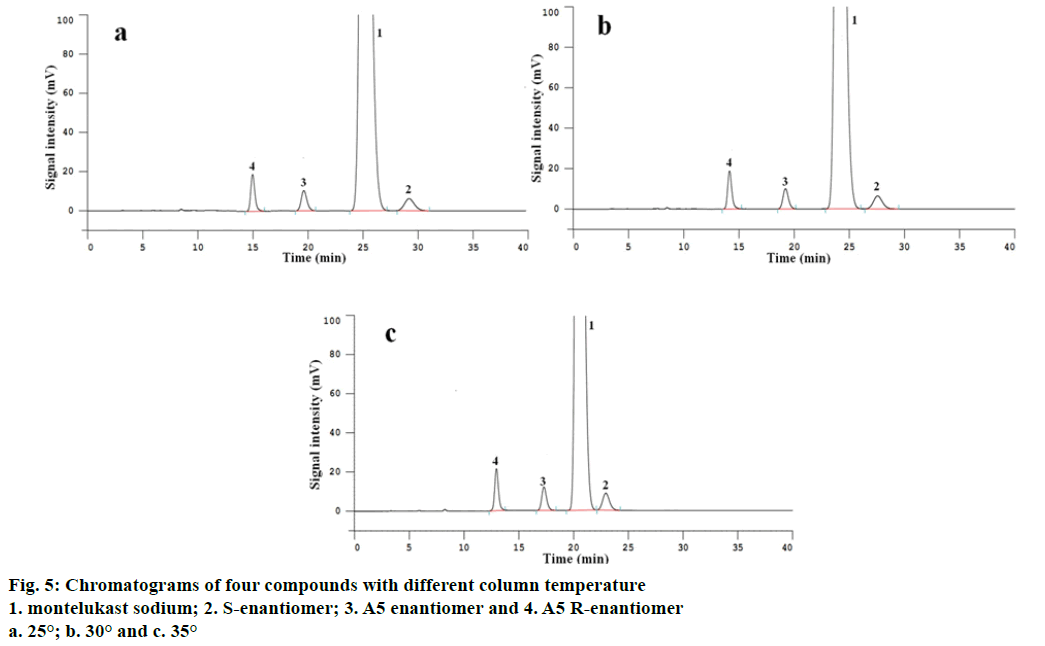 The robustness test results showed that when the chromatographic conditions flow rate, column temperature, columns from different lots and addictive’s content were deliberately varied, the resolution between the montelukast sodium and its S enantiomer was always >2.4, and the resolution between A5 and A5 R-enantiomer was >6.3. These experiments results showed that the robustness was good under various test conditions (Table 3).

The results for stability displayed that the RSDs of six montelukast sodium peak areas during solution stability test was 1.66%, hence, the test sample solution was relatively stable for 12 h, but there is a small impurity peak at the retention time about 13.8 min, the contents were 0.016%, 0.012%, 0.032%, 0.044%, 0.052%, 0.06% for 0 h, 1 h, 2 h, 4 h, 8 h, 12 h, respectively. It suggested that the sample solution had better complete detection test with 1h after sample prepared, while the impurity peak area was increased by 0.044% from 0 h to 12 h, it may be disregarded. Three lots of montelukast sodium drug substance were dissolved in hexane:isopropanol:ethanol (65:15:20, v/v/v/v) to obtain a solution of 1000 μg/ml, separately, and these samples were tested using the developed method. The results display that all of A5, A5 R-enantiomer and montelukast S-enantiomer were not detected.

The authors thank Disha Pharmaceutical Group for giving the support to complete the study and acknowledge their colleagues for their cooperation in carrying out this work. The authors have declared no conflict of interest.